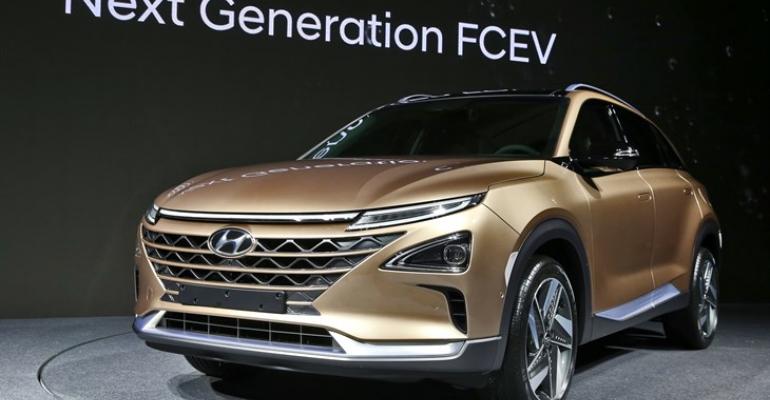 The auto industry’s mass migration to battery-electric vehicles may now be influencing two companies that initially cast their lots with fuel cells.

Hyundai Motor Co. recently announced it will launch a battery-electric vehicle with a 300-mile range after 2021, along with an all-electric compact SUV with a 234-mile range in the first half of 2018. Meanwhile, Toyota Motor Corp. is reported to be working on a solid state battery technology that could put the automaker back on the road to a battery-electric car in the future.

Those moves would be a subtle departure for both companies. Hyundai rolled out its Tucson Fuel Cell vehicle in 2013, proclaiming that hydrogen fuel cells were superior to batteries. And Toyota has resisted calls to produce an all-electric car for more than a decade. To be sure, both companies are maintaining their stakes in fuel cell technology, but experts see the moves as a potential broadening of their lineups.

“It’s not a big departure, but it’s a shift in importance within their portfolios,” noted Brett Smith, a program director at the Center for Automotive Research. “In both cases, battery technology is rising toward a more prominent role.”

For both, the news represents a change in philosophy. In a 2013 press release for the Tucson Fuel Cell, Hyundai took swipes at battery-electrics. “Because of the inherent weight and cost of batteries, and the chemistry and physics that drive slow recharge times, today’s electric vehicles have practical limits for many consumers,” the release stated.

Similarly, Toyota has steadfastly resisted the industry’s move to BEVs. As far back as 2000, the giant automaker dug in against California’s idea for a zero-emission vehicle mandate, calling it “a train wreck waiting to happen.” By 2011, when introducing its Prius PHV plug-in hybrid, Toyota engineers still insisted that consumers were “unlikely to buy a car that leaves you uncovered 10% of the time,” referring to the drawback of pure EVs.

Still, Toyota has not publicly announced any plans to build a BEV, and did not respond to calls about it from Design News. Numerous news reports emanating from Asia, however, indicate that battery power may be ascending to a more important role at Toyota. The Chunichi Shimbun, Reuters and Forbes in Asia have all written about the possibility of the company producing a fast-charging, long-range EV by 2022. Reuters also reported that Toyota intended to “commercialise all-solid-state batteries by the early 2020s.”

Neither Toyota nor Hyundai have budged from their commitment to hydrogen, however. In April, Toyota revealed “Project Portal,” a fuel cell system for heavy duty truck use. And two weeks ago, Hyundai provided a glimpse of its next-generation hydrogen fuel cell vehicle, which will launch early in 2018.

For both companies, the move toward BEVs may be a form of insurance – a nod to the rising prominence and falling costs of battery technology. Most experts believe that battery-based powertrains will be cost competitive with internal combustion engines within a decade, long before hydrogen will have solved its infrastructure and cost problems.

For Toyota, the work on batteries is also consistent with its view on alternative pathways to the future. “In one way, it’s part of their stated strategy of multiple streams for the future,” Smith told us. “But it’s also noteworthy in that it’s a step, not away from, but in parallel with, their fuel cell pathway.”