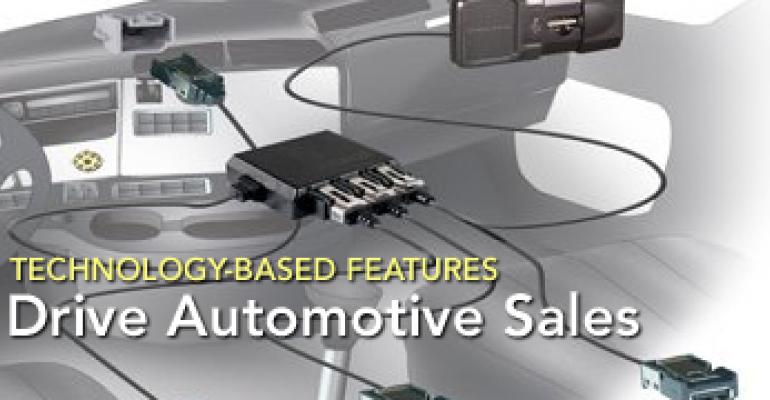 The current automotive sales slump is impacting nearly all automakers around the world. While outstanding pricing and financing options provide a strong incentive, according to David Cole, chairman of the Center for Automotive Research (CAR), the technology-based features from safety, comfort and convenience, infotainment and, of course, performance, frequently help the consumer decide to purchase one vehicle over another. Thanks to input from several automotive suppliers, Design News has created a technology stimulus package of goodies that could bring car buyers back to showroom floors. Some of these are still in the concept stage.

What Do Car Buyers Want?

Answering this question requires a lot of trial and error. From a historical perspective, Automotive News identified the 10 hot features in 2008 as:

Outside of number 6, these items fall into four areas that continue to entice car buyers: power train (performance/fuel efficiency), safety, comfort/convenience and infotainment. In the area of consumer electronics, "J.D. Power and Assoc.'s 2007 U.S. Automotive Emerging Technologies Study" of new car buyers shows 62 percent want to connect a portable music device to their vehicle's radio. All carmakers responded in one manner or another to this customer desire. At least one automaker identified the role technology plays in moving vehicles off the lot.

Initially announced at CES in 2007 and the 2007 North America International Auto show, Ford developed SYNC with technology partner Microsoft. Based on Microsoft Auto software, the software platform is easily modified and allows Ford to offer new features by simply upgrading the software. An upgrade was announced the following year at CES 2008. Ford included 911 Assist and Vehicle Health Reports to SYNC's existing capabilities of voice commands Bluetooth and MP3 connectivity.

"Because the 911 Assist and Vehicle Health Reports required modifications to software other than the SYNC module, you had to take it into a dealer," says Velle Kolde, product manager, Automotive Business Unit, Microsoft. Normally, this is not the case. "Whenever you have to just upgrade the SYNC module, you can just download it to a USB key and plug it in there," he adds.

At CES 2009, Ford added even more features to SYNC, in spite of the automotive industry's usual reputation for taking two or more years to implement new technology. "Yes, we are a car company, but we are learning to think like an electronics' company when it comes to bringing fresh, new and innovative technologies and products to market," said Mulally.

Launching this summer, SYNC with Traffic, Directions and Information provides customers emergency, diagnostic and information services, as well as traffic reports and directions. The system brings together an onboard text-to-speech engine, the customer's mobile phone and network, data-over-voice technology, an off-board routing engine and voice portal, text messaging, an existing mobile application and the power of the Internet in an unconventional time frame for automotive. The reduction in time-to-market is attributed in part to working with technology partners.

By including the SYNC service in the vehicle's purchase price, Ford provides the new capabilities with no initial monthly subscription fees for the first three years, making it even more attractive to customers. The new services will be available on nearly all 2010 Ford, Lincoln and Mercury models. This is all occurring within the first generation of the SYNC and is by no means the end of the line.

Dealing with the hardware-specific side of connectivity, Delphi's High-Speed Digital Data (HSDD) connector systems address the broad range of high-speed protocols in vehicles, including USB 2.0, 1394, LVDS, FlexRay, eMOST and Ethernet. In addition to high-speed data in multimedia systems that require continuous shielding, these connectors are also deployed in camera and video applications used in safety systems.

"It is a computing platform that has a lot of capability associated with it," says David Zufall, CTO Network and senior vice president Network Systems, ICO Global Communications. Together with its satellite communications capability, Zufall says he thinks the approach allows them to do something different in the telematics' space providing much broader service offerings for connectivity to the car.

Complementing its ICO G1 satellite, the largest commercial satellite launched to date, ICO demonstrated the world's first fully integrated satellite-terrestrial network at CES 2009. ICO's mim delivers live television, interactive navigation and two-way communications directly to the vehicle and a wide variety of portable devices. Connected to the vehicle's CANbus, the module can talk to all the modules in the car. "Through that connectivity, we can now host a whole range of additional services beyond what existed historically," says Zufall.

In one of its concept implementations, ICO partnered with Delphi for the antenna using the DVB-SH standard, display and other hardware. Delphi's dual-view screen plus Mobile DTV capability for receiving local broadcast content allows only the front seat passenger to view entertainment while the driver observes drive-related navigation, communication and command functions. Satellite-accessed content includes premium television, automotive assistance, connected navigation and local content such as news, weather, sports and more.

HUGHES Telematics has its own ideas for connecting car customers. These range from products at the production intent status to some that are strictly at the cool concept stage. With a push-to-talk button, a driver can initiate conversational voice search instead of the context established, tree-based searches in current voice command systems. Using Sirius XM satellite radio, the vehicle accesses a range of audio-video content through an architecture designed to meet the Next Generation Telematics Protocol (NGTP) standard developed by the telematics' industry to improve the technology interface capability.

According to Tom Taylor, vice president of engineering development, HUGHES Telematics, the company wants to be an aggregator of vehicle content. They can demonstrate how greater connectivity can be obtained in a vehicle environment. At CES, HUGHES Telematics demonstrated how widgets, software components designed specifically for the vehicle, could provide connectivity and enhance the driving experience. With 10-MHz bandwidth, HUGHES Telematics' vehicle demo received four channels simultaneously showing the capability of a high bandwidth communication channel.

A Virtual Accessories' feature in HUGHES Telematics' Telematics Control Unit (TCU) allows the on-demand activation of services already integrated into the TCU such as navigation, satellite radio and Bluetooth.

NXP engineers put some of the company's technologies to work in a few concepts that may get carmakers' and customers' attention. One of the ideas is a key with added functionality. "The idea is you can make credit card payments with the car key itself," says Gino Knubben, an engineer at NXP. NXP engineers modified an existing BMW key to include RFID hardware to allow the key to become a smart card-like product. The key's added functionality can be used inside or outside the vehicle. For example, simply putting the car key and items the user wants to buy on a reader is all it takes to make a secure transaction. Purchasing gasoline is an obvious point where this capability could be used, as well. In another concept, a driver could find the location of a misplaced car by sending the car navigation system information to the key. The GPS coordinates are automatically transferred to the key when the driver leaves the car. "All you have to do is put two devices together and then the information will be transmitted," says Knubben. Using RFID connectivity between the car key and a modified mobile phone, the driver can even verify if the doors were locked, find out how much gas is left, the estimated driving range and whether the lights are on or off.

Of course, in extremely limited editions and for a lot more money, car companies will provide just about anything. The new presidential limousine, officially called Cadillac One, but rapidly acquiring the nickname of the Obamamobile, probably includes some very sophisticated electronics especially in the infotainment area. While government restrictions prevent Cadillac from revealing those features, one exception is the high-tech LED spotlights that illuminate the flags at night. Since the traditional incandescent lamps have been replaced with the latest, more fuel-efficient lighting, we can only guess at the other goodies that are inside.