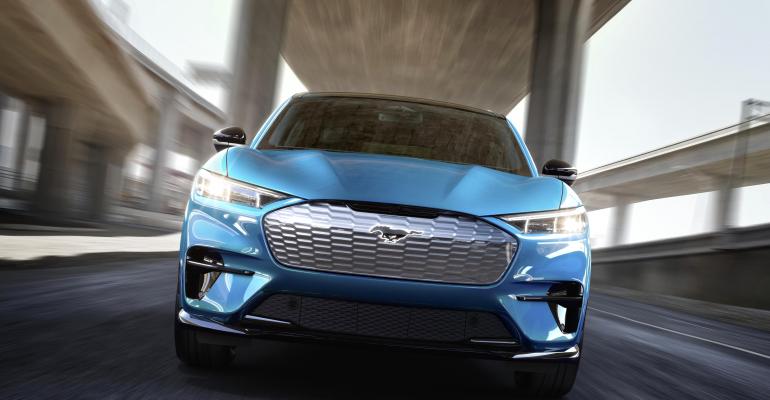 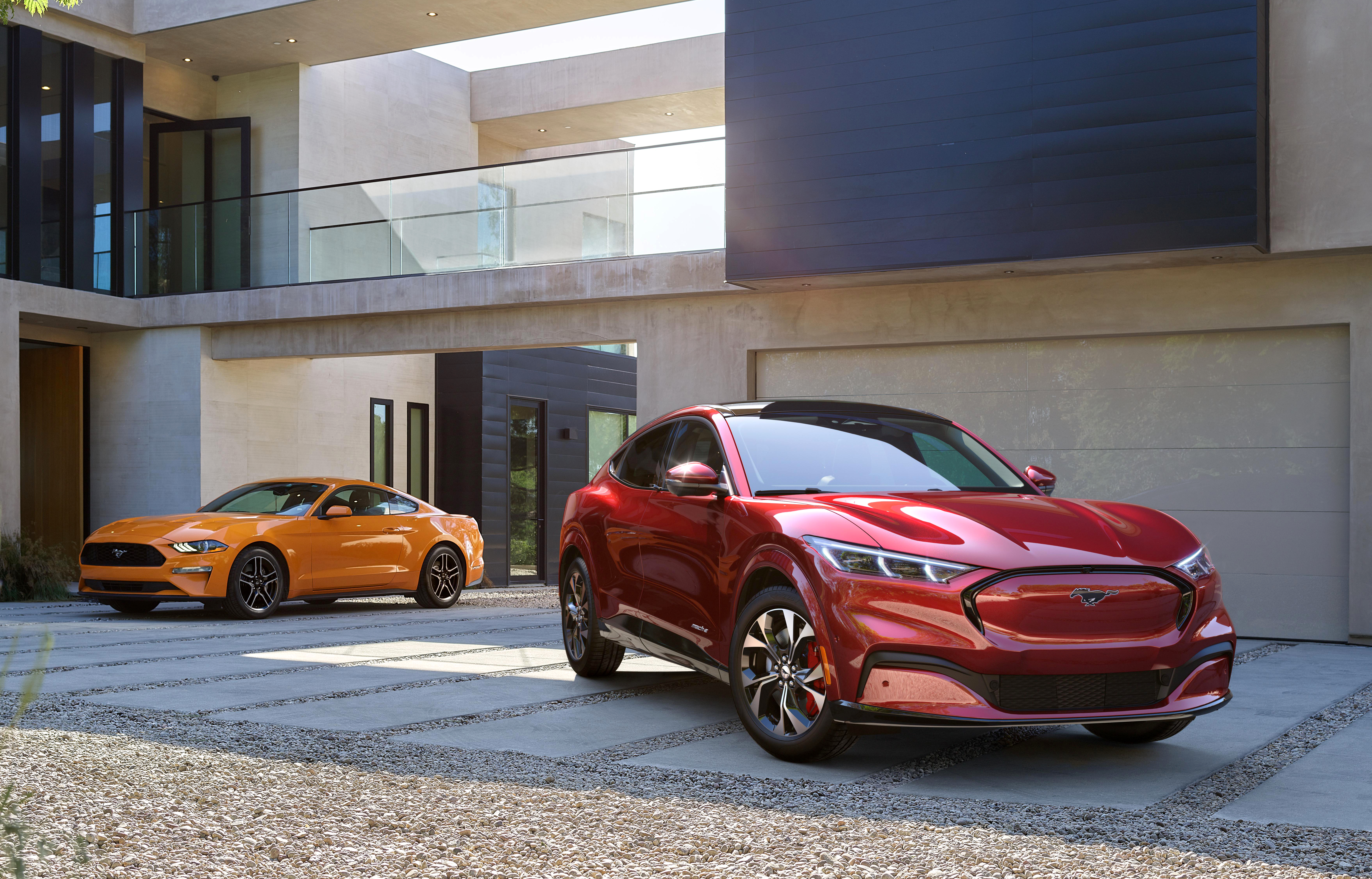 Remember when Chevrolet showed the zoomy Camaro-inspired Volt concept car that made the EV world lose its mind, only to roll out a disappointingly dull production model saddled with an interior seemingly supplied by RubberMaid?

Ford has gone the opposite direction with its upcoming Mustang Mach-E EV, which started life as what Ford terms a “compliance” car. That is, a palatable EV built to comply with California’s mandatory electric car sales. As such, it was seen as little more than an electrified Focus economy car.

But Ford executives recognized that electric car components still cost more than combustion engine components, and that if customers are going to be asked to pay more, the manufacturer should deliver something more inspirational for the money.

The Mustang Mach-E is Ford’s solution to this challenge, explained Darren Palmer, Ford’s global product development director for battery electric vehicles. Most EVs until now have been tall vehicles, with high prismatic pouch battery packs stowed beneath the floor contributing to the upright layout.

This is an area where Tesla’s use of AA-like cylindrical 2170 battery cells rather than prismatic cells provides an advantage. Those smaller cells can be packaged beneath the floor without raising it to SUV-like heights. Ford wanted to use prismatic packs, but didn’t want them to be so intrusively tall that they would undermine its plans for a sporty looking Mach-E.

The solution was a partnership with supplier LG Chem to develop new prismatic pouches that are shorter in height but wider, trimming the cells’ height to 5.9 inches (150 mm). These shorter cells are suitable for use in a wider array of vehicles than ones that would only fit in tall vehicles, boosting their potential for high volume, Palmer said.

“Should one car be more popular than the others we can switch between them,” he pointed out. This flexibility increases the likelihood that Ford EVs will find customers in one vehicle segment, if not another.

“That gives confidence to our suppliers,” said Palmer. “When they are nervous, they give us prices that are not good.”

Ford and LG Chem negotiated a deal for battery prices that are so aggressive that Ford raised its sales forecasts for the Mach-E. That put different pressure on LG Chem, which now had to worry about making enough cells rather than being stuck with inventory. Nevertheless, “we convinced them to keep the price,” he recalled. 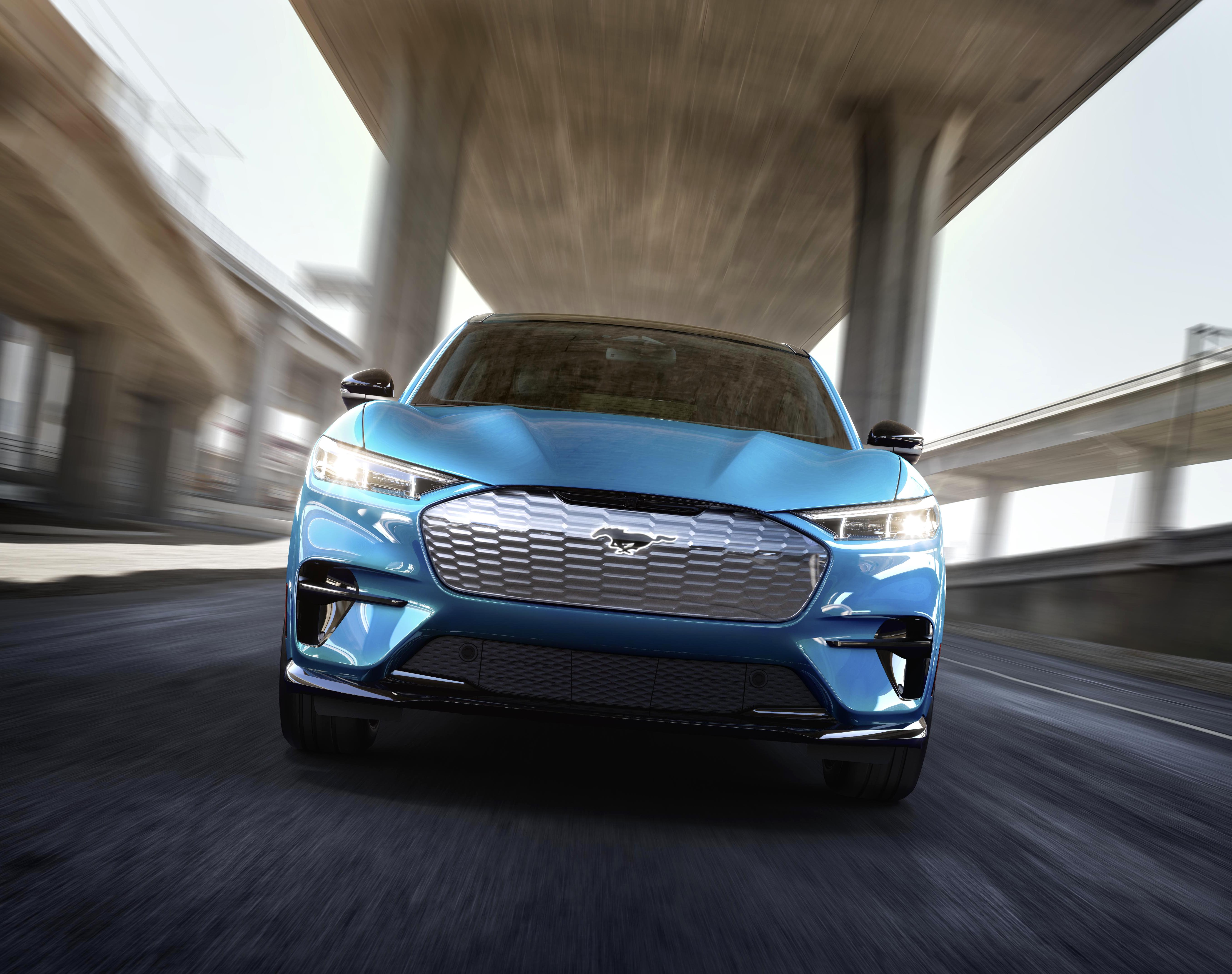 Ford apparently believes that customer concern about battery pack longevity remains a potential obstacle to purchase, so the company will apply an 8-year, 100,000-mile warranty to the Mach-E’s battery.

“You have a motor that is like one inch across that has a ridiculous amount of power for the size of it,” he said. The challenge is metering the power from such motors. “You have to carefully control it; that’s where the skill is. How smoothly you do that is the characteristic of the car.” The finesse that is possible depends on the number of coils built into the motor, as increased coil density provides more granular control of the motor’s movement.

Permanent magnet motors are also more efficient than induction motors, which is driving the industry to the same solution, Palmer said. “Others who started on induction are moving to permanent magnets.” 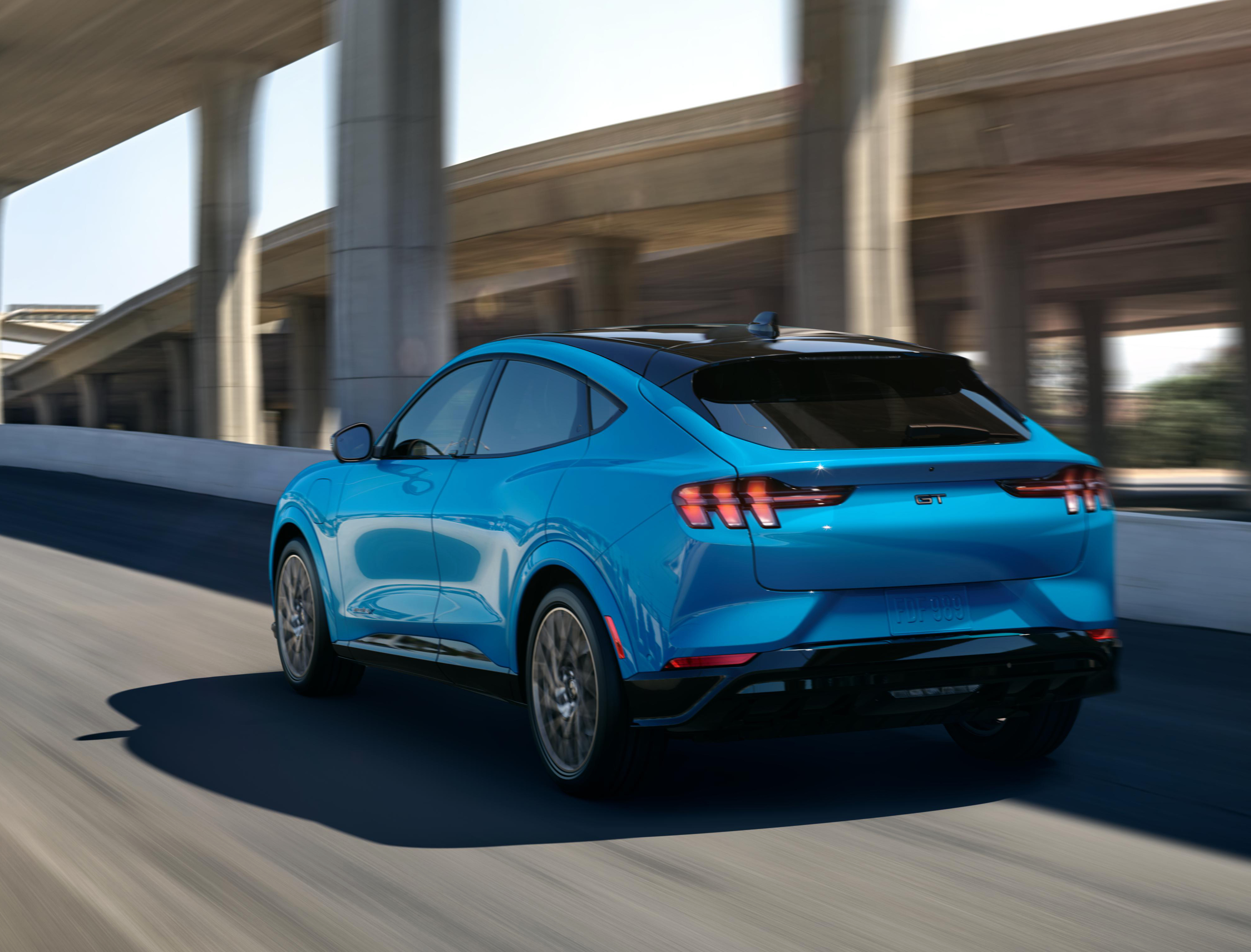 One aspect of the original Mustang that drove its popularity was that it was available with an affordable, fuel-efficient six-cylinder engine and an array of increasingly powerful V8s, letting customers choose the power level that suited their needs and budget.

The Mach-E is following the Mustang’s 1964 playbook, with a single large motor driving the rear wheels in the base model. Drivers who want all-wheel-drive can add a second, smaller motor to the front axle, boosting performance and all-season traction. And the Mach-E GT puts one of the large electric motors at both the front and rear axles, for maximum power. “Even the slowest one feels brisk,” reports Palmer, “and the fastest one is outrageous.”

Ford also doubled down on the experience of one-pedal driving. Many EVs employ aggressive regeneration when the driver lifts off the accelerator, providing defacto braking that lets them start and stop the car using only the accelerator. This one-pedal driving can be very convenient in traffic, but it usually works only at slow speeds, not when you need to come to a complete stop.

“Many electric cars, when you take your foot off the gas, they regen down to 3 mph and then they can’t regen any more. You can’t really stop by just taking your foot off the accelerator because it is not bringing you to a halt.”

Recognizing this issue, the Mach-E will actually activate the foundation brakes at these very low speeds to give drivers a seamless one-pedal driving experience, Palmer explained. “We have integrated the brake system to do that. You get one pedal to bring the vehicle to a stop because we blend in the brakes and hold you on a hill.” 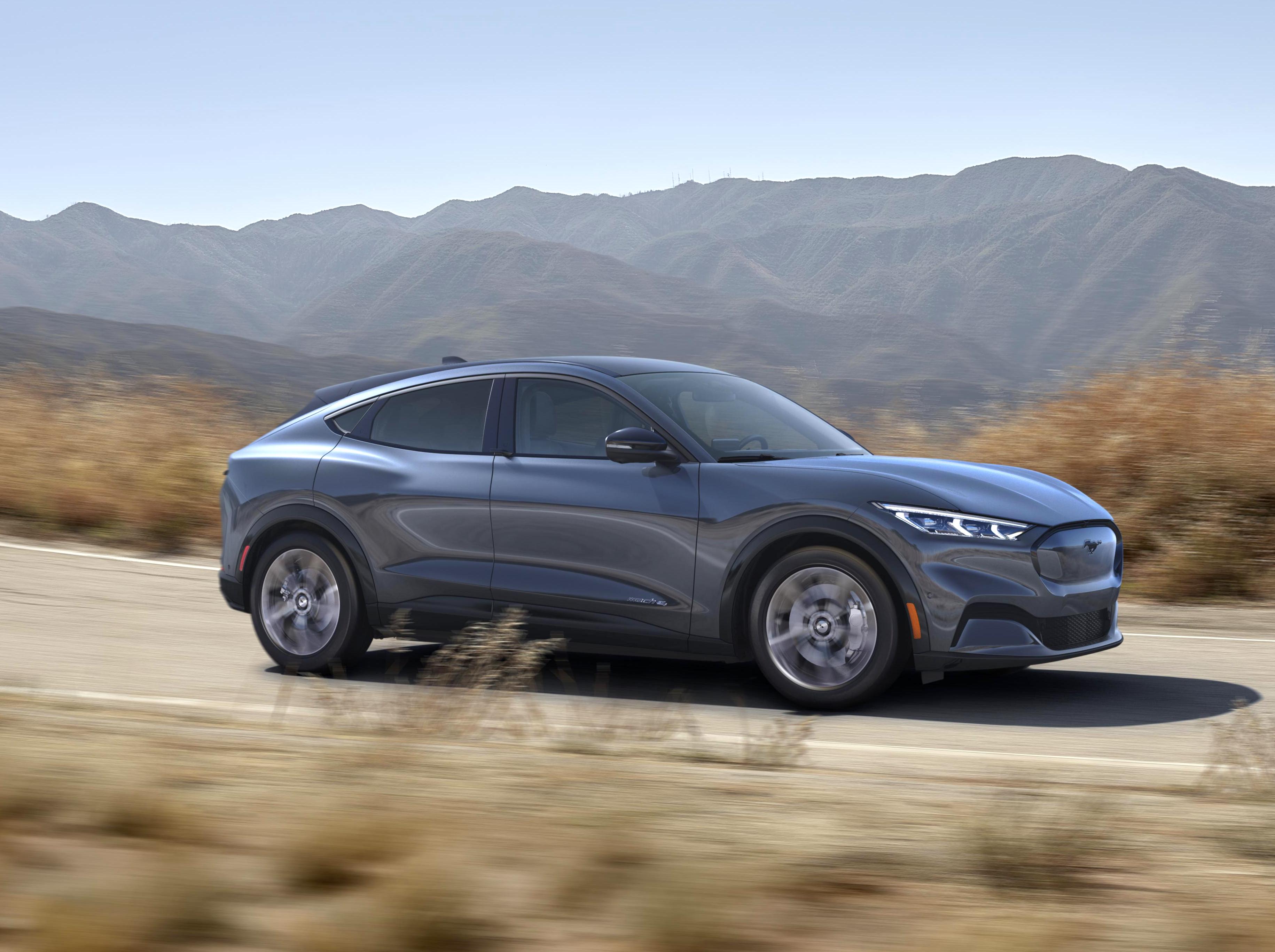 The Mach-E includes driver-selectable modes, so that they can calibrate the car’s response to the situation as needed. “Whisper” mode might be ideal for getting to work on a groggy Monday morning, with its soft acceleration, easy steering and soothing sounds through the audio system , while “Unbridled” will unleash abrupt power with quick steering and invigorating sound.

Ford knows that few customers have electric vehicle charging stations installed in their homes today, so to lower that barrier, the company is including a portable charger with the Mach-E that works are higher-powered 240-volt power outlets. Many companies’ chargers work with both 120-volt and 240-volt plugs, but the Mach-E’s charger taps the 240-volt dryer-type outlet at 9.6 kilowatts, for faster home charging than the typical charger. The Nissan Leaf, BMW i3, and Fiat 500e, for example, have 6.6-kW chargers.

Previously, to get this kind of charging power, customers would have had to install a home charging unit. “We chose to give what you need in the luggage compartment. All you need is a dryer socket, and you’ve got everything you need,” Palmer said. 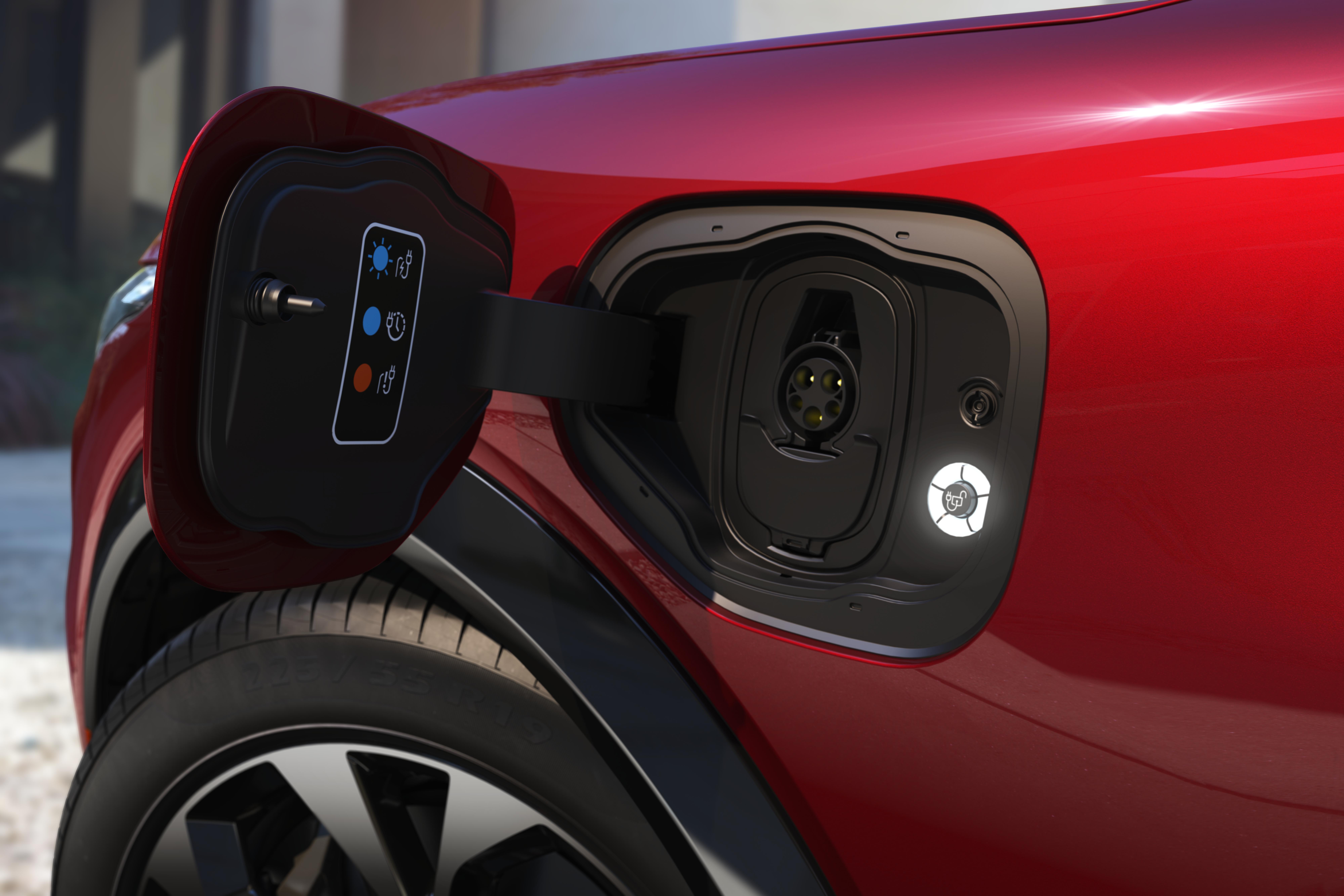 This combination of well-considered details could explain why the orders for the Mustang Mach-E First Edition are already sold out. Ford says that 55 percent of buyers are opting for the available all-wheel drive and 80 percent have chosen the optional 98.8 kilowatt-hour extended range battery over the standard 75.7 kWh pack.

The Mach-E’s sporty styling and athletic performance should ensure that Ford’s first serious EV will escape the Volt’s ignominious end. Ford says there are still some Premium Edition and GTs available for order, even though the First Edition is sold out.