Oak Ridge National Laboratory (ORNL), which has done intensive research into carbon fiber, has developed a surface preparation method to improve joining the composites with aluminum. The ramifications are potentially far-reaching for high-volume industrial applications. 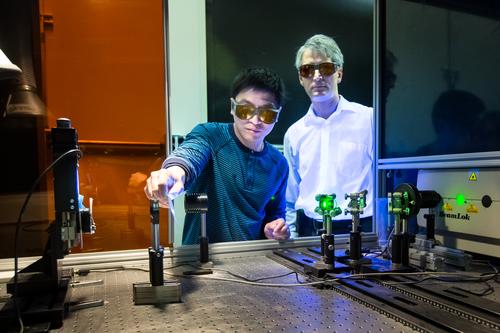 The laser-based surface preparation method is a logical extension of this research, by making it easier to join the multiple materials found more and more often in the production of lightweight cars. But the lab's method doesn't just make this easier: it also improves joint robustness, and is capable of being automated. This could enable greater use of such multimaterial joints, as well as cut the production costs of current multimaterial components.

The process was developed by a team led by Adrian Sabau, head of materials processing & joining for ORNL. It replaces the standard practice of hand preparation, which uses abrasive pads, grit blasting, and environmentally harmful solvents to remove layers of material from surfaces before bonding. This is necessary because the surfaces of both aluminum and carbon fiber composites contain substances that make adhesion tough, if not impossible: carbon fiber surfaces often contain mold releases, and aluminum surfaces typically contain oils and other contaminants from production rolling operations.

In the video above, the laser used for this process appears to be a Spectra-Physics QantaRay system. At 1:20, the camera focuses on Sabau's hands turning knobs on a Spectra-Physics QantaRay laser control panel. At the same time, his voiceover says, "We took a tool that was developed for a totally different application, and we tried to see if the basic promise of this technology can be used to enhance other material systems."

ORNL says removing the surface contaminants makes joints stronger: in tests of single-lap shear joint specimens, the strength, maximum load, and displacement at maximum load were increased by 15%, 16%, and 100%, respectively, over those properties measured for the conventionally prepared baseline joints. The researchers also reported that joints made with surfaces that had been prepared with laser structuring can absorb about 200% more energy than those baseline joints. This has major implications for improving vehicle crash safety. It could also make possible better body armor and vehicle armor.

Sabau presented the team's findings last month at The Society for the Advancement of Materials and Process Engineering conference in Long Beach, Calif.