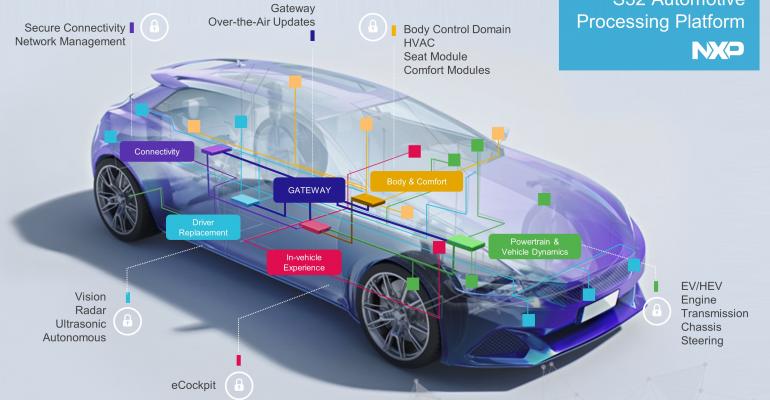 NXP's S32 platform aims to make it easier for developers of ADAS and infotainment systems to reuse existing software.

Known as NXP S32, the new platform is targeted at software-intensive automotive applications, such as advanced driver assistance systems (ADAS), infotainment, and safety. It simplifies development of those systems by providing a standardized way of working across domains, thereby making it possible for engineers to reuse much of a vehicle’s existing software. “It’s going to allow people to do things they couldn’t do before,” Matt Johnson, general manager for product lines and software at NXP told Design News. “Automakers will be able to bring next-generation vehicles to market faster, and suppliers will be able to provide capabilities that they couldn’t have provided up to now.”

NXP engineers say the S32 platform can do that because it offers a unified architecture of microcontrollers and microprocessors. It includes devices based on the ARM Cortex-M, ARM Cortex-R and ARM Cortex-A cores, and offers an identical software development environment across all devices. As a result, they say, it allows 90% software reuse within application domains, and 40% across varying domains.

“It’s bringing levels of software reuse that have never existed before in our industry,” Johnson told us.

Reuse is important in today’s automotive industry because automakers and Tier One suppliers make huge capital investments in the development of new software. When the software can’t be reused on new generations of products, those investments are largely lost.

The S32 platform could offer a solution to such dilemmas by allowing automakers to reuse software, even across disparate applications, such as automotive radar and infotainment. In such cases, approximately 40% of the software could still be reused, according to NXP.

If true, that would be a huge step forward for automotive developers, not only in terms of development time but cost, as well. “There’s a huge need for software platforms that you can use when you move from one generation to another,” noted Luca De Ambroggi, senior principal analyst for London-based analyst firm IHS Markit. “If you can reuse it, you benefit in terms of time and cost because you don’t have to re-qualify and re-develop software.”

NXP said the platform also aims to enhance automotive quality and reliability. It offers ASIL D (Automotive Safety Integrity Level) support on Cortex -M, -R, and –A cores, reportedly being the first to do all three. The company also said the new platform offers ten times the performance of predecessors in functional safety applications.

NXP told Design News that eight of the top 15 automotive OEMs have already adopted the S32 platform. The company expects that number to grow in the near future.

De Ambroggi said the NXP strategy “conforms to the direction” of the auto industry. Given ongoing developments in autonomous cars and functional safety requirements, the industry is in need of a scalable hardware and software platform, he said. “The key is that NXP is offering a broad portfolio that limits the (OEM’s) development cost,” he told us. “And development cost is a problem that everyone in the industry is facing right now.”

De Ambroggi added NXP’s strategy is unique for now, but hinted that could soon change. “We’re expecting others with similar approaches in the next few months,” he said.