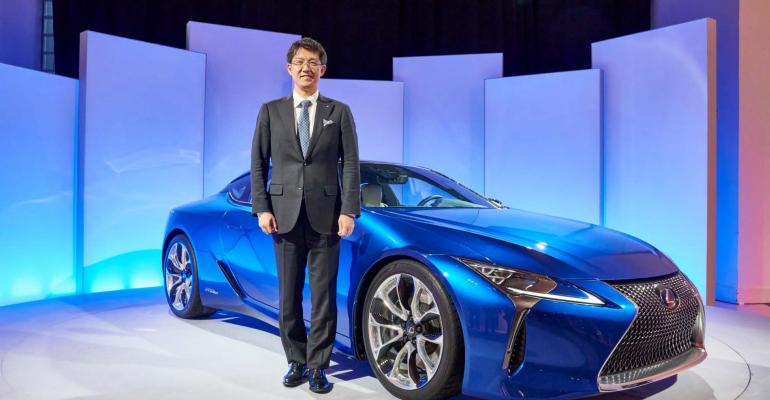 Koji Sato takes over as president, but will retain responsibility as chief engineer for the brand’s vehicles.

A challenge for engineers is often that the reward for a job well done is a promotion to management and an end to their engineering work. Lexus chief engineer, best known recently for his development of the gorgeous LC500 sport coupe has been rewarded with a promotion to the very top, as he will become president of Lexus International on January 1, 2020.

It is a hard-earned result, as Sato led the team that developed the LF-LC concept car from a stylist’s somewhat impractical dream to the Lexus LC500 production model reality, overcoming significant obstacles during the five-year project. Perhaps it was his ability to balance the desires of styling with the practical realities of engineering and manufacturing that highlighted Sato’s management potential.

Sato says his goal in serving in these roles will be “to continue his quest for creating the best looking and best engineered vehicles in the world that possess a true Japanese character along with Lexus’ trademark ‘clear and deep’ driving character.”

The 1992 Waseda University mechanical engineering graduate led the development of the Lexus GS mid-size sport sedan before taking on the LC program.

“I was the Chief Engineer for the LC,” Sato recalled in an exclusive statement to Design News. “That vehicle represented a significant development milestone for Lexus as a brand,” he said. “It pushed us to change our ways and our thinking. LC was a visionary project in nature, bringing many new design, engineering and manufacturing ideas to the brand - including new processes and a mindset to make that coupe as emotional as possible.”

“Along the way, we worked hard to develop the empowering collaboration and high-level team work necessary to bring this vision to life,” Sato continued. “The LC showed the way, and helped us define a mission to explore technologies and challenge ourselves to produce more innovative and exciting Lexus vehicles.”

Sato said he hopes to apply lessons learned on the LC program to the rest of the company while serving as president. “For the Lexus organization, going forward, my hope is to draw on years involved in team-focused vehicle development, and the diligent work necessary in bringing a vision to reality to help challenge, inspire, and energize the entire organization as we continue evolving the Lexus brand globally.”

Some of the specific challenges overcome in developing the production LC500 from the LF-LC concept car included the difficulty of stamping the car’s dramatic sheetmetal and getting the front suspension to function properly beneath its extremely low hoodline.

Controlling the stamping process was a key to preserving the stylists’ intent in the LC500’s lines, Sato explained at the time of the car’s 2016 launch. “Normally the pressing makes some cracks in the sheetmetal if it is too deep,” he noted at that time. By carefully controlling the conditions of the stamping process and determining the correct number of times for the die to strike the metal, Sato’s team came to a workable solution by “trying and trying and trying,” he said.

The LC500’s most critical design aspect is its very low hood. Ideal suspension design for an unequal-length control arm configuration conflicts with the desire for low bodywork. “Normally, a higher upper arm is better for compliance,” said Sato.

Sato’s team solved the problem of marrying the suspension geometry to the sheetmetal with six months of hard work on the problem, he said.

Perhaps it was that tenacity that helped him earn the promotion to the president’s office. Away from work, Sato enjoys driving his classic 1993 Toyota Supra on winding mountain roads. In perhaps typically Japanese fashion, he like practicing the traditional Japanese tea ceremony, but atypically, he also likes listening to the music of John Coltrane. Maybe the ability to balance American Blues music with the Japanese tea ceremony holds the key to balancing between management work as Lexus president and engineering work as the company’s chief engineer.