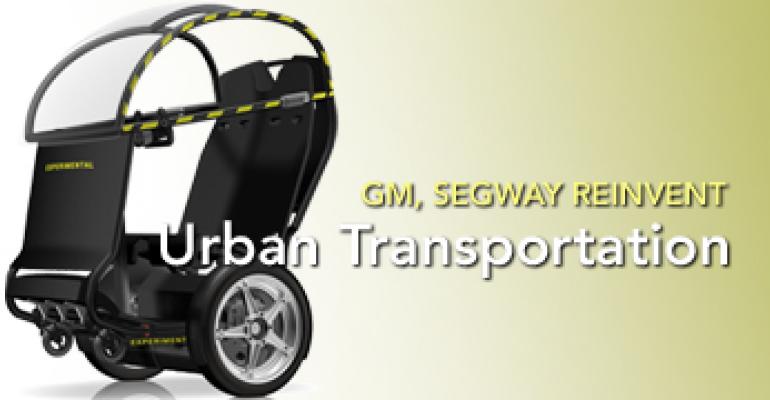 General Motors and Segway have teamed up to develop a two-wheeled, electrically powered, two-seat prototype vehicle that will include a lithium-ion battery and dual electric wheel motors, GM officials announced earlier this week.

The Project P.U.M.A. (Personal Urban Mobility and Accessibility) prototype can travel up to 35 mph (56 kph), has a range of up to 35 miles (56 km) between recharges and emits zero emissions. It is aimed at reducing traffic congestion and providing a means of cleaner, more affordable transportation in major cities, according to GM.

"Project P.U.M.A. represents a unique solution to moving about and interacting in cities, where more than half of the world's people live," says Larry Burns, GM vice president of research and development and strategic planning.

The prototype combines several technologies from GM and Segway, including an electric drive system and batteries, dynamic stabilization, all-electronic acceleration, vehicle-to-vehicle communications, digital smart energy management, a dockable user interface that allows off-board connectivity, and autonomous driving and parking. The onboard connectivity technology allows vehicles to talk to each other to avoid crashes and to drive themselves, according to GM.

"Imagine small, nimble electric vehicles that know where other moving objects are and avoid running into them," says Burns. "Now, connect those vehicles in an Internet-like web and you can greatly enhance the ability of people to move through cities, find places to park and connect to their social and business networks."

Burns says Project P.U.M.A. vehicles could run about one-fourth to one-third of today's cost of owning and operating a car.

"This is what P.U.M.A. is capable of delivering," says Burns. "Imagine moving about cities in a vehicle fashioned to your taste, that's fun to drive and ride in, that safely takes you where you want to go and connects you to friends and family, while using clean, renewable energy, producing zero tailpipe emissions and without the stress of traffic jams."

According to GM, the P.U.M.A. won't be commercially available until at least 2012. Cost estimates are not yet available.