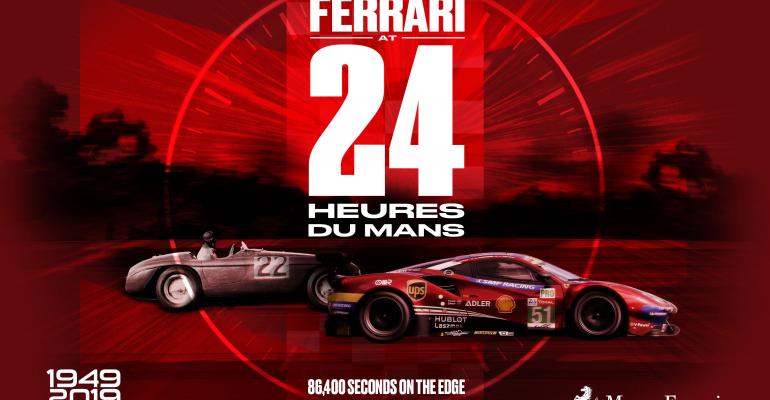 Start Slideshow ›
<p><em>Image source: Ferrari</em></p><p>Ferrari has so much glorious history that the company needs two museums to show it all. There's the Museo Enzo Ferrari, which is in Modena, founder Enzo Ferrari's hometown. And there's the Museo Ferrari Maranello, located in the nearby town where the company is headquarted. This museum is now showing 'Ferrari at 24 Heures du Mans,' an exhibit showcasing the unparalleled success of the red cars in the French racing classic.</p>
A new Le Mans exhibit at the Museo Ferrari Maranello spotlights the Prancing Horse's illustrious history in the world's most famous sports car race.

The popularity of the film Ford v Ferrari, which documented the 1960s battles between the two marques for Le Mans supremacy, may spark interest in seeing some of the cars Ferrari has used to amass nine overall victories and an amazing 27 class wins over a span of 70 years.

The inaugural victory came in Ferrari's first try in 1949, with the 166 MM Barchetta Touring piloted by Lord Selsdon and Luigi Chinetti. At the time, there were no requirements for how long each driver must be behind the wheel, so Chinetti drove for a stunning 23 hours, 30 minutes, leaving Selsdon to bring the car home to victory over the last half-hour.

The film earned an Oscar nomination for Best Picture showing Ford's perspective on the brief rivalry between the companies, but this musuem exhibit illustrates the totality of Ferrari's success at Le Mans and underscores the reason why Ford attempted to buy the company at that time.

See Our Visit to BMW's Amazing Vintage Cars in its Classic Center
Sep 20, 2021