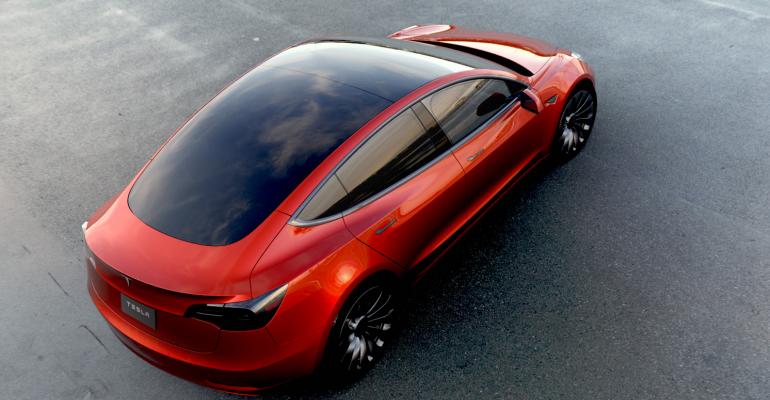 Op-Ed: Edicts in China, Europe and US are leading more automakers to make long-term commitments to electric vehicles.

A few years ago, US consumer acceptance was considered the key to the success of the electric car.

No more, though. A collection of other forces have stepped up, relegating US consumer acceptance to a lower rung on the market ladder. So now, even if sales of the Chevy Bolt and the Tesla Model 3 fall flat, even if American consumers let out a collective yawn with the debut of each new battery-powered vehicle, automakers will continue to make real plans to sell new electric cars.

That became more evident this month. General Motors announced it would produce 20 new electric models, designed from the ground up, by 2023. Ford Motor Co. said it has formed an internal unit, called Team Edison, to accelerate EV development. And Toyota, a longtime battery-electric vehicle (BEV) skeptic, said it is partnering with Mazda Motor Corp. and Denso Corp. to create a “common architecture” for EVs.

To be sure, nothing much has really changed in terms of sales. In 2016, battery-electrics accounted for a paltry 0.4% of US EV sales. And this year, GM has sold only 14,000 Bolts through September. Meanwhile, Tesla Inc. continues to post losses while struggling through what Elon Musk calls "production hell" on its Model 3.

So, no, despite what media evangelists may say about the potential profitability of electric cars, that’s not the reason for the growing number of corporate commitments to electrification.

The truth is, the soul of the American consumer is still very much an unknown on this matter, and even if it were better understood, it’s hardly the only factor. Automakers now know they have to move forward, largely based on a collection of factors.

Among those is China. Last year, China reportedly accounted for nearly half of the worldwide sales of BEVs. In large population centers, Chinese consumers have little chance of obtaining license plates for gas-burning new cars, creating a mandate of sorts for EVs, according to a recent article in The Wall Street Journal. Chinese officials are aiming to put five million EVs on the road by 2020, and the Warren-Buffett-backed Chinese EV-maker BYD Auto Co. Ltd. is hoping to transfer that success to the US market. That, of course, makes US automakers forge nervously ahead, for fear of being left behind.

Europe, too, is finding ways to mandate electrification. France wants to ban sales of gas- and diesel-powered cars by 2040, while Norway and the Netherlands want to phase out all new fossil-fuel-powered vehicles by 2025.

Then there’s California. In 2018, California and nine other states will require 4.7% of vehicles sold to be zero-emission. That number climbs to 15.4% by 2025, according to the California Air Resources Board. Loopholes that allowed automakers to transfer credits from state to state are also gone in 2018. “For example, if an OEM has to sell 50,000 in California and 10,000 in New York and New Jersey, until now they’ve been able to sell 70,000 in California and transfer the credits,” notes Sam Abuelsamid, senior analyst for Navigant Research. “But they can no longer do that. They must now sell 10,000 each in New York and New Jersey.”

Finally, there’s Wall Street. To get the halo effect and boost its stock value, each manufacturer needs to join the high-tech parade.

For automakers, the bottom line is the need to sell EVs – in Europe and China, as well as California, Connecticut, Maine, Maryland, Massachusetts, Michigan, New Jersey, New York, Oregon, Rhode Island, and Vermont. And if consumers don’t favor EVs, then the automakers have to find ways to subsidize those vehicles with the sale of other products.

That’s not to say that the performance of the Chevy Bolt and Tesla Model 3 are unimportant. They’re very important. They’ll give us a way to measure the popularity of electric cars, especially in the US. But they won’t make or break the entire EV movement.

Automakers are now in this for the long haul. That trend is irreversible.

What we don’t know is if it will be profitable.