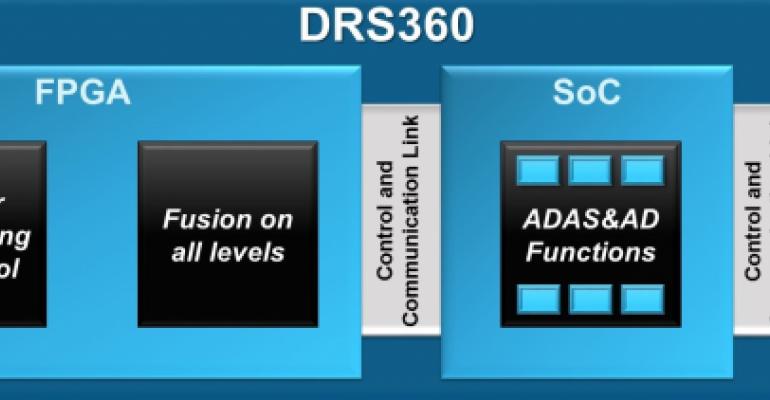 New architecture from Mentor Automotive sends all of the unfiltered data from cameras, radar and Lidar sensors directly to a central processor that makes the decisions.

Targeted at the highest levels of vehicle autonomy, the new platform departs from past self-driving technologies by employing “raw data fusion.” In essence, it sends all of the unfiltered data from cameras, radar and Lidar sensors directly to a single central processor that makes the decisions.

“We take the raw data directly from the sensors, eliminate the edge node data processing, and then fuse all the data in real time across all the different sensors,” noted Glenn Perry, vice president and general manager of Mentor Graphics Embedded Systems Division, which developed the new technology and which will be discussing power sensitive embedded design at the Embedded Systems Conference next month. “It’s a really tough challenge. But we knew that if we could do it, we could get rid of the latency and reduce the cost.”

Known as the DRS360, the new platform is different from conventional advanced driving assistance systems (ADAS) because it eliminates the use of dedicated processors at every sensor. Up to now, every ADAS sensor (camera, radar, Lidar) has employed its own dedicated microcontroller (MCU) that filtered the data, and then relayed it to a separate module containing another processor that made the decisions. The result was multiple processors and delays of up to 100 msec as the filtered data bounced from one processor to another.

“A couple of years ago, we looked at the existing architecture and said, ‘This isn’t going to work – it’s fundamentally flawed,’” Perry told Design News. “So we designed a new Level 5 system from a clean slate, and made it so it could scale down to the lower levels.”

The resulting solution is a centralized module consisting of an FPGA (field programmable gate array), SoC (system on chip), and a microprocessor, as well as a communication framework that allows the devices to “talk” to each another. On top of that, it employs specialized software that enables it to capture, process and then fuse the data from all the sensors. Mentor engineers say this approach reduces latency, cuts bill-of-material costs and consumes less power.

Surprisingly, Mentor claims that the new architecture not only eliminates the need for data processing at every sensors, but also reduces the amount of processing that takes place at the central processor. “We had a hunch that if we used a centralized raw data fusion set, we could apply machine learning algorithms that would actually reduce the need for compute power at the central node,” Perry said. “And that’s the way it has turned out.”

Mentor says the new technology can handle the computing chores for SAE Level 5 autonomous vehicles – that is, autonomous cars that require virtually no human intervention. It says the architecture is also suitable for the lower levels, such as those that can intercede and take over for a human driver.

Industry experts who have reviewed the new technology said it’s a big step forward, but added that it will probably appeal more to automakers who are looking to take leadership positions in autonomous driving. “The fusing of raw data is a Holy Grail, but it’s not without its difficulties,” Ian Riches, director of Strategy Analytics, told Design News. “If you’re designing a car from a clean sheet of paper, this is probably the way you’d want to do it. But if you’re an OEM for whom ADAS is a check-box exercise, then you may want to carry on with a piecemeal approach.”

Mentor engineers expect the technology to appeal mostly to Tier One suppliers and big OEMs. For years, they said, many of those engineers have been searching for ways to reduce the complexities caused by growing number of microcontrollers in today’s vehicles, and this is one way to help address that issue.

Power Management in Embedded Systems. The importance of power management in today's embedded designs has been steadily growing as an increasing number of battery powered devices are developed. Often power optimizations are left to the very end of the project cycle, almost as an afterthought. Join Mentor Graphics at ESC Boston, May 3-4, 2017, as they discuss design considerations that should be made when starting a new power sensitive embedded design. Register Today!
TAGS: Electronics
0 comments
Hide comments
Related
You Might Like