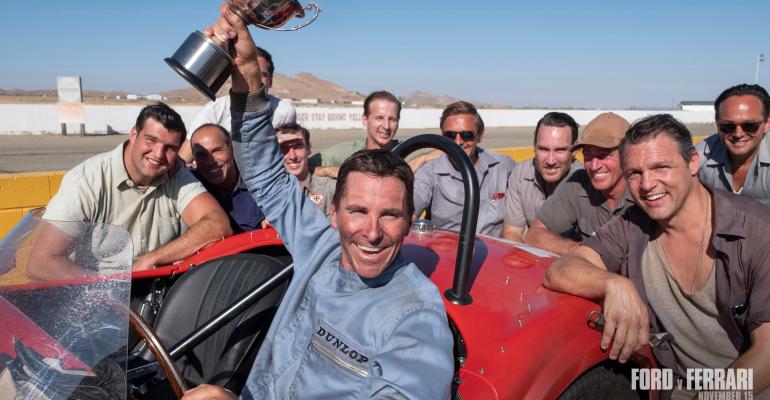 The hard work of developing the successful Ford GT40 for the 24 Hours of Le Mans is highlighted in this new film.

Carroll Shelby’s name is synonymous with performance cars thanks to his decades of building race cars and street-legal models inspired by his race cars, and the new hit film Ford v Ferrari (which opened with a 90 percent fresh rating on Rotten Tomatoes) provides movie-goers a front row seat to the legend-building as it happened. Massachusetts actor Matt Damon successfully impersonates Texas racer Carroll Shelby, while Christian Bale introduces viewers to driver/engineer Ken Miles.

In the early 1960s Shelby started building his name as a carmaker with a deal to put Ford’s then-new small block Windsor V8 engine into AC Ace sports car to create the Shelby Cobra.

From there, the deal grew to modify new Mustangs and turn them in to Shelby GT350s. Finally, Shelby was contracted to help Ford beat Ferrari in the 24 Hours of Le Mans sports car race. Shelby, and Ford, fell short of that goal on the first two tries. Shelby took another shot in 1966, with Ford’s honor and the future viability of his own company likely in the balance. This is the focus of the film, the showdown between racing titan Ferrari and manufacturing titan Ford, as well as the smaller, unseen battles fought along the way to make Ford’s car competitive, and then finally, dominant.

The car that Ford chose to challenge Ferrari’s might at Le Mans was the Lola Mk. 6 GT, a mid-engine sports car from England. Shelby’s plan was to follow his previous example with the Cobra by dropping in the Ford 289 small block V8. But, as with the Cobra, Shelby’s team of engineers ended up significantly redesigning the Lola to become the Ford GT40. And they had to do still more work when Shelby concluded that the 289 lacked the gumption to beat Ferrari.

Switching to the NASCAR 427 big block engine solved the power problem, but naturally brought with it a raft of other concerns. Ford v Ferrari could be the most engineering-centric film since the NASA team depicted in Apollo 13 declared that “failure is not an option” and engineered life-saving solutions to that failed moon mission.

A scene where a GT40 festooned with yarn tufts explores airflow at the track in those days before computational fluid dynamics is a great look at the engineering process for the general public. The best part is that the scene of trackside innovation really happened and was not a dramatic contrivance by the filmmakers.

The disputed outcome of the race was the result of Ford’s attempt to stage a three-car photo finish, combined with inscrutable French officiating, as was covered by the documentary 8 Meters: Triumph, Tragedy and a Photo Finish at Le Mans.

This race’s story has been told before Ford v Ferrari, in print by author A.J. Baime’s Go Like Hell (4.46 out of 5 stars on GoodReads.com) and in a film documentary by Adam Carolla, The 24-Hour War (100 percent fresh on Rotten Tomatoes). Both are immensely enjoyable, and factual, tellings of this story.

It is nice to see a film that showcases the engineering work that it takes to surpass an accomplished rival. Maybe we can soon welcome some collegiate Formula SAE competitors who say they were inspired to join the engineering ranks by this film’s depiction of the engineers as heroes.