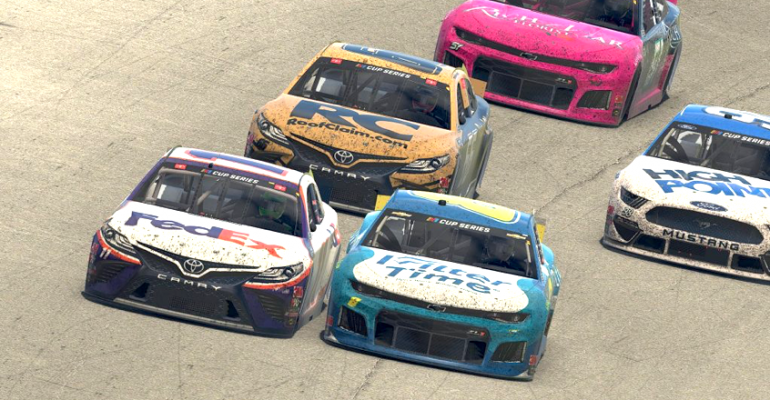 Simulated racing puts drivers back in competition during the coronavirus shutdown. 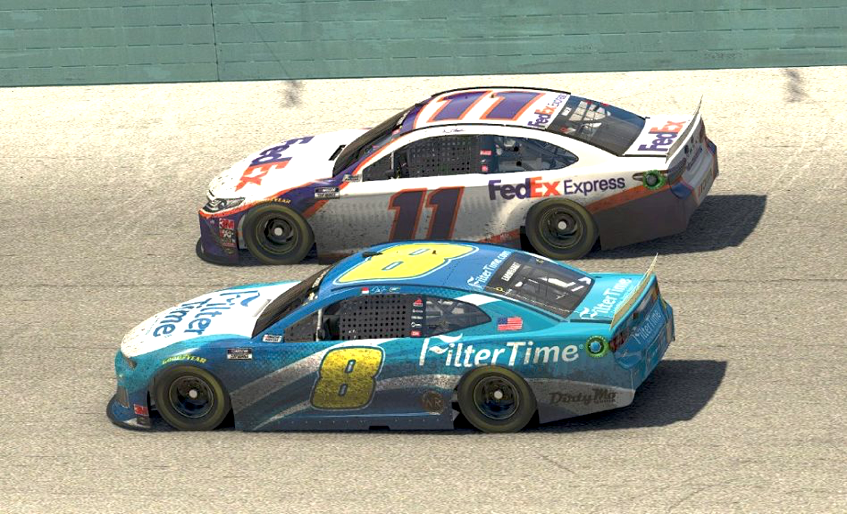 The cessation of all public activities has simultaneously wiped out popular sporting events and created a home-bound audience craving entertainment, and the engineers and coders who have steadily constructed a virtual racing world stepped forward to fill the void with real competition between real drivers who happen to be at home rather than at a race track.

Formula 1 directed attention to a long-running virtual series that parallels its races. That series normally has its own virtual racing experts, but in response to the COVID-19 coronavirus, the series welcomed in some current and previous F1 drivers.

Indycar took a different approach with its virtual Indycar Challenge. Rather than attempting to replicate the weekend’s cancelled event, Indycar had fans vote to pick a track where the series’ regular drivers will compete March 28 in a virtual race streamed online to fans. The opening virtual race event will be followed by Barber Motorsports Park (April 4), "Driver's Choice" track (April 11), "Random Draw" track (April 18), Circuit of The Americas (April 25) and a non-Indycar "Dream" track (May 2).

Nascar, IMSA and Indycar all use the popular iRacing online racing platform to host their virtual events, while Formula 1 has its own proprietary F1 eSports platform for its virtual races.

iRacing was founded in 2004 by Dave Kaemmer and John Henry. Kaemmer was co-founder of Papyrus Design Group, developers of award-winning racing simulations including "Grand Prix Legends" and NASCAR 2003." Henry is principal owner of the Boston Red Sox and Liverpool Football Club, as well as co-owner of NASCAR's Roush Fenway Racing.

“iRacing is a sim racing game that combines a true-to-life racing experience with an online community of virtual racers all over the globe,” the company explains in a promotional video. “iRacing offers a multitude of officially licensed cars and tracks, laser-scanned with millimeter accuracy. Their car models and mechanical systems are based on real-world physics and engineered in cooperation with manufacturers and race teams.”

IMSA’s virtual Sebring race ran first, on March 21, with a livestream on YouTube and Twitch including commentary from the Radio Le Mans commentary crew that is familiar to fans, for a realistic feeling to the broadcast.

Teams entered their regular drivers or guest drivers from other series such as Indycar to pilot the virtual representations of their cars. iRacing permits extremely fine control of setup and tuning for these virtual cars, a fact that the factory BMW team exploited in having their regular race engineers work with their drivers to optimize their cars’ setup for the notoriously bumpy Sebring circuit.

“They can really fine tune the driving and get the best out of the car,” noted third-place finisher Jesse Krohn in the post-race press conference. “iRacing is the platform I find so realistic; they laser scan the tracks and have a great job with the cars. The [BMW] M8 is the same as in real life. It correlates to the real thing as well."

This preparation worked, as the BMWs dominated, cruising to a solid 1-2-3 finish over the rival Porsches, Ferraris, and Fords. “"To give you a sense how big this was, I just got a message from Jens Marquardt, who is the BMW motorsports director” said Nicky Catsburg, runner-up in the race. “He was watching. It shows the importance of this event." 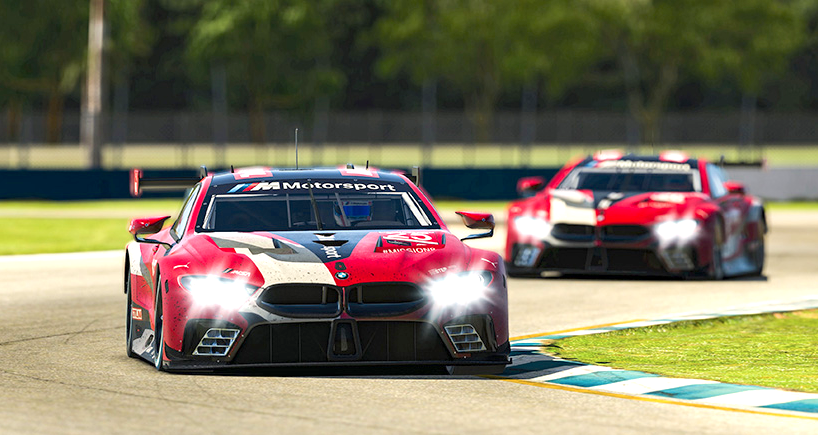 Meanwhile, the top three drivers were all safely socially isolated in their homes in France, Finland and Belgium. “Passing start/finish, I had goosebumps,” exclaimed race winner Bruno Spengler. I was almost screaming on the radio! But I had my dog and wife sitting next to me as I was racing. Normally, they are far away!”

All three drivers noted that they found it is challenging to maintain focus during virtual racing because of the dearth of sensory input from the real world. "It is very difficult to stay focused for an hour and a half without any sort of feedback in G-force, or the bumps,” said Spengler. “It’s purely mental concentration. You’re sweating quite a lot. It works your concentration very hard, and it’s the best you can do if you can’t race. Probably even more than the racecar."

Krohn opts for virtual reality headset over the typical spread of video display screens. "I use VR, so for me it feels like I’m sitting in the car,” he said. “I feel in the zone with the VR goggles. It feels like I’m in the car. Some people say it’s a disadvantage because of the refresh rate. But if I can look around the corner, and this helps me concentrate in race situations, it helps give a broader view of the car next to me. It feels more real versus having three screens around me."

Nascar has a far bigger following and took a more aggressive approach to its show, which was broadcast on Fox Sports 1 television channel, where it scored an audience of more than 900,000 viewers. That made the eNascar iRacing Pro Invitational Series Dixie Vodka 150 a true cultural happening by providing live sports with an assist from technology.

Round two of the series will take place at a virtual Texas Motor Speedway March 29, and racers are reportedly spending their time to upgrade their equipment and their familiarity with virtual racing to avoid embarrassments like seven-time Nascar champ Jimmie Johnson’s repeated crashes as he tried to learn the ropes of virtual racing.

While the track and vehicle dynamics modeling by iRacing is crucial to delivering a representative experience, there is also hardware on the driver’s end that is needed to deliver that experience.

iRacing runs on 64-bit Windows software, with a requirement of a 4-core CPU such as an Intel Core i5, a gaming graphics card with a minimum of 2G of dedicated memory, 10G of free hard disk space, a steering wheel and pedals and a high-speed internet connection that isn’t a satellite-based system. 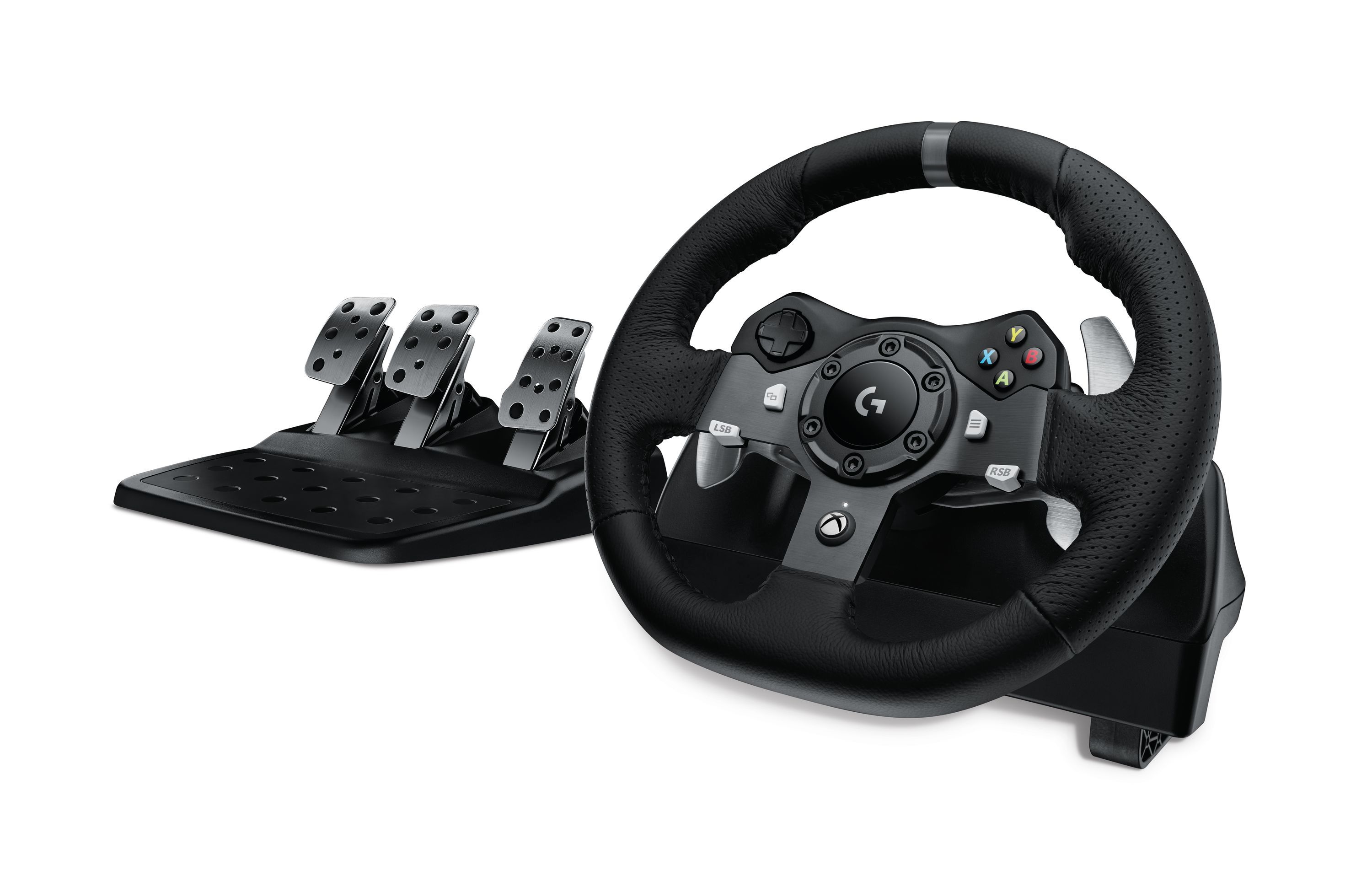 Either way, these add-on steering wheels and pedals provide an effective way for gamers to start out racing online. For more serious online racers there are elaborate, and expensive, racing cockpits that aim to replicate the entire experience of being in a racecar. These can run in the tens of thousands of dollars and they are the sort of system most of the pro racers are now using.

But not all of them. Top-rated Nascar online racer Ty Majeski, who was a favorite to win the inaugural Nascar Invitational race against household names like three-time Daytona 500 winner Denny Hamlin and Dale Earnhardt Jr., is famous in the online racing community for using exactly the kind of humble clamp-on steering wheel setup that casual gamers use.

“Many of [the well-equipped pros] started on Logitech gear, so they are very familiar with our gear,” remarked Logitech gaming device press spokesman Derek Perez. “Those tens-of-thousands-of-dollars rigs, that’s not our market. For everyone else out there, if you are just starting out or it is your hobby, our products cover that gamut.”

Demand for input devices built during the week before the opening weekend of these new, high-profile online racing events. “The week leading up to the eNascar race on Sunday we started noticing a large number of teams getting set up,” observed Perez. “They called, asking ‘How can I get a wheel or a mouse and keyboard?’ I’d say we got 25 to 30 requests from pro racers or their teams. This week has been another spike in people asking for gear.”

Those pros were scrambling for the pricey high-end simulators too. “We got a lot of inquiries and phone calls,” reported Zach McAfee, managing director of Sim Seats, which makes the high-end driving simulators. “One week ago, we had eight sims here in our showroom that you can look at and today we have 2 left. They’re all gone because so many drivers want to get into the series.” 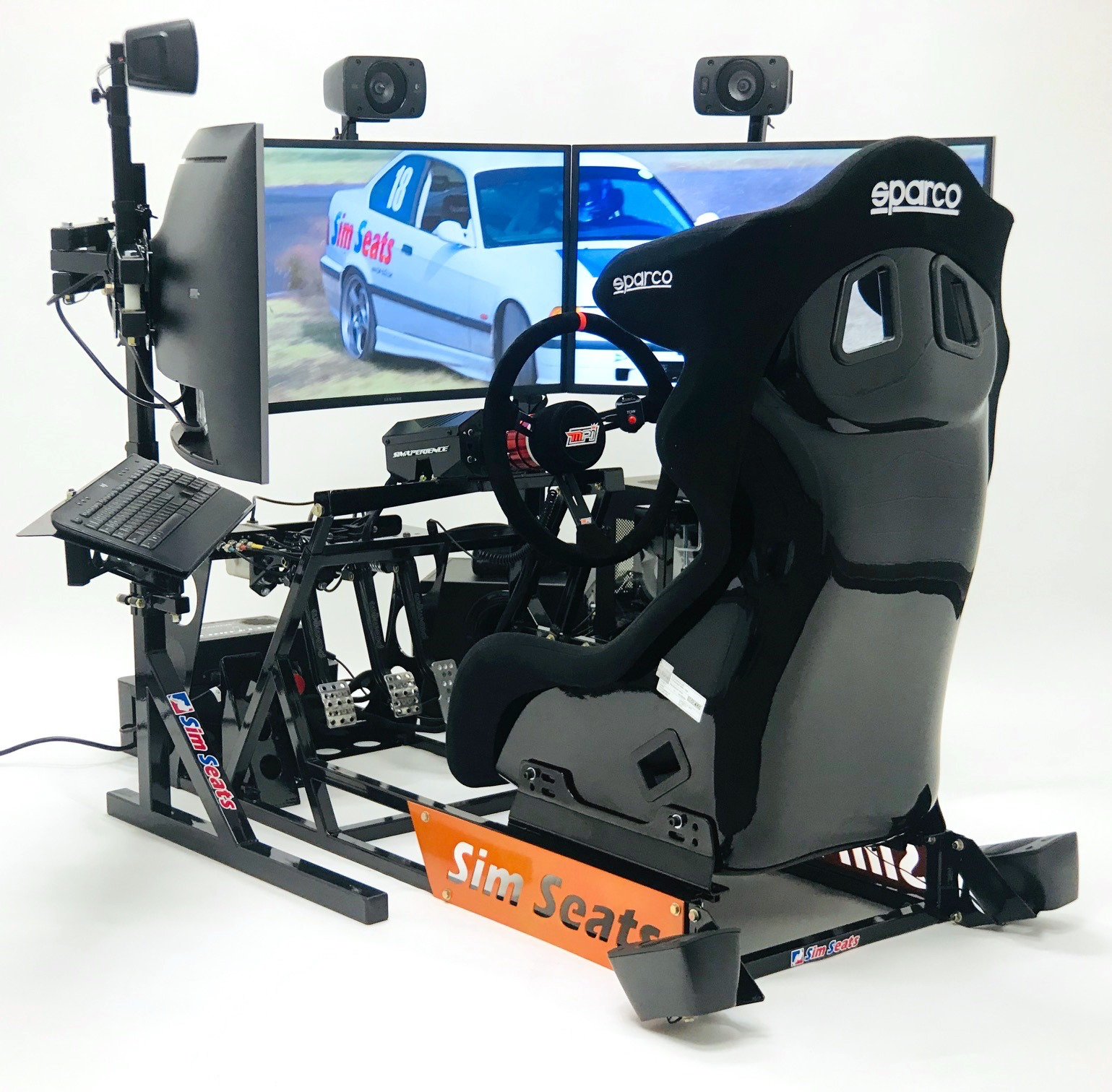 Even with such high-end hardware, Sim Seats’ McAfee appreciates the accessibility of the consumer-grade components used by most racers. “If you had to have an expensive rig to do iRacing it would alienate a lot of people,” he observed. “Seeing Ty [Majeski] with a laptop and a steering wheel clamped to his desk, I think it is great.”

And fans do see their favorite drivers because of their heavy engagement through social media. Jimmie Johnson streamed his drive live, while Hamlin quickly tweeted out video clips from his house. “I loved the environment, I loved the race, I loved the interactivity,” enthused Perez. “I thought all of it was fun. It was an hour and a half where fans could sit and watch and be entertained.”

The Sim Seats setup costs so much because of the quality of the components that go into building it.  Such rigs include a real racing seat from a supplier like Sparco and pedals from companies like Tilton and Wilwood that are the same parts as go into the real racecars. And they connect to hydraulic master cylinders, just like in the car too.

The rig has to have a very rigid structure so it doesn’t deform when the driver stomps the brake pedal or wrestles against a direct-drive force-feedback steering wheel when the car is sliding, according to McAfee. Plus, it is critical to have an ergonomically efficient layout for the driver, one that accurately replicates the driver’s position in the race car, he added.

Sim Seats mounts all of this to D-Box Technologies motion actuators to provide the sensation of actually driving. “Motion is not just a party trick,” stated McAfee. “It needs to provide feedback to feel what the car would feel like in real life.”

Sim Seats uses D-Box actuators because “they have bar-none the best motion coding available. You can feel rumble strips on the curbing, or engine vibration or going into a four-wheel skid,” McAfee said. “It is very nuanced.”

The result of this incredible array of technology, from iRacing, the teams and the drivers, has created the possibility of providing sports action to an audience that is starved for competitive entertainment.

“iRacing is at a tipping point,” said Perez. “Cancellation of racing and those racers looking for an outlet provided this opportunity.” iRacing has been around since 2004, but until now, many fans and racers held virtual racing at arm’s length. “There has been a line between real racing and sim racing, and now this line is now being blurred,” he said.

And as with so many people now conducting their profession from home, other lines are being blurred too. So rather than wearing his usual suit, Hamlin drove in casual tee shirt and jeans. And no shoes. "I like feeling the pedals, with shoes I just can’t do it, so I always go barefoot," Hamlin said. 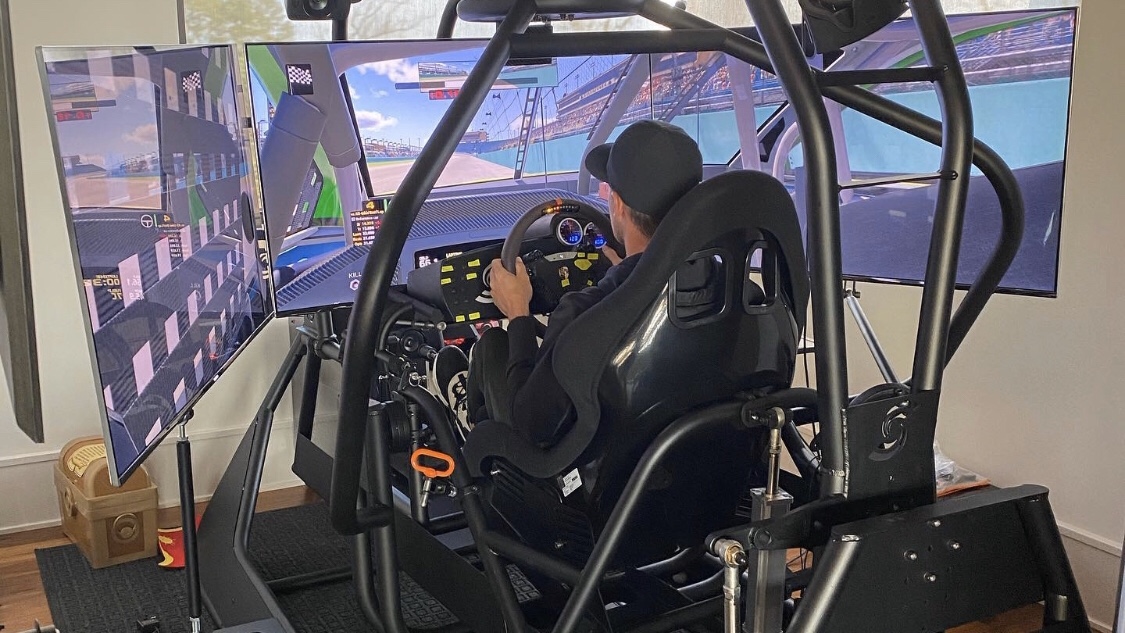 Real racing series should start worrying that their casual-Friday drivers won’t want to come back to their hot, sweaty fire suits, gloves and shoes after the comfort of working from home.

Though it is possible drivers’ families will insist, judging from the video Hamlin tweeted, explaining that he owes the family swear jar a dollar, of him exclaiming at the excitement of his win and his stunned seven-year daughter hearing her dad yell the things that are normally said in the privacy of his race car.