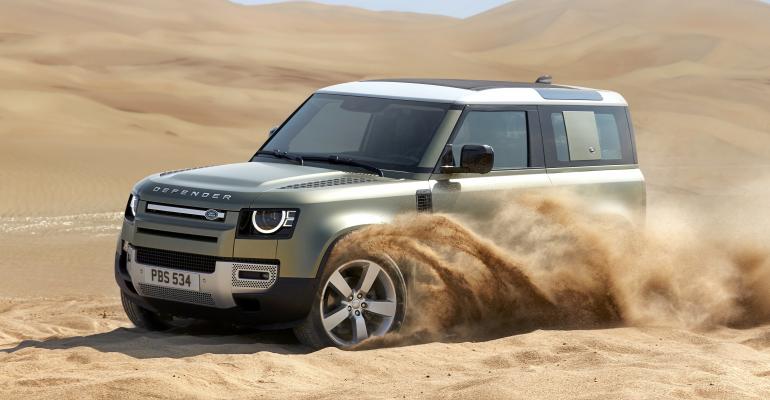 Since its debut at the Amsterdam Motor Show in 1948, the utilitarian Land Rover has been synonymous with can-do off-road capability in the furthest reaches of the globe. How many documentaries on African wildlife would have ever been made without the participation of Land Rover?

The ubiquitous Land Rover gained the Defender moniker in 1991. The idea was to distinguish the traditional model from the then-new Discovery. But all along, it has been available in 90-inch short wheelbase two-door and 110-inch long wheelbase four-door variants, and they are identified by those numbers.

The previous Land Rover Defender 90 and 110 went on hiatus in late 2016 and it is returning now in rejuvenated contemporary form for 2020. While Mercedes chose to leave the outer appearance of its G-Class SUVs largely unchanged when it redesigned that vehicle, Land Rover chose to look forward rather than back, with styling that honors the original Defender without mimicking it.

While styling may seem superficial, plenty of tough engineering work went into producing a suitably upright, boxy design that slips through the air with minimal blunt force trauma. By carefully finessing the new Defender’s surfaces and using accessories as aerodynamic aids, the Land Rover aerodynamic team was able to whittle the Defender’s coefficient of drag down to 0.38, reported chief engineer Mark Wilson. That’s the same as Land Rover’s sleek-looking Range Rover Sport model.

The Defender’s traditionally abbreviated front and rear overhangs remain, ensuring good approach (38 degrees) and departure (40 degrees) angles for traversing steep obstacles. At the same time, however, take note of details like the circular-square openings in the front bumper fascia, which are optimized for airflow. “They are not some random size,” Wilson pointed out. “They’ve been engineered.”

Air ducts through the fascia’s intake vents to jet out ahead of the front tires in the wheelwells, creating an air curtain that steers airflow away from the drag-intensive spinning tires. Speaking of tires, take a look at the spare tire mounted on the rear of the Defender. It is carefully positioned as an aerodynamic aid, to optimize the vehicle’s wake, according to Wilson.

Land Rover achieved the Defender’s remarkable aerodynamic performance by “tweaking ever single surface around the car,” Wilson said. “The engineers all pulled together and they’ve really gone after it."

That sheet metal is also part of the Defender’s D7x unitized aluminum chassis structure. Compared to the old model’s body-on-frame design, the new Defender is an eye-popping three times stiffer in torsional rigidity, at 29,000 nM/degree.

Some of that strength extends to the roof, which Land Rover reinforced in the expectation of safari Land Rovers carrying roof racks with massive loads of up to 370 lbs. The company did not report the resulting impairment to the Defender’s impressive new aerodynamic number of carrying such a load on the roof, but perhaps at African savannah driving speeds aerodynamic drag is less of a concern!

Beneath the Defender’s squared-off hood are either of two powerplants in the US. market. The base engine is dubbed “P300,” and it is a turbocharged 2.0-liter inline four-cylinder engine rated at 296 horsepower. The P300 features a twin-scroll turbocharger for responsive power, and it accelerates the Defender to 60 mph in 7.7 seconds.

The P400 upgrade engine is based on a 3.0-liter version of the same architecture with two additional cylinders. It incorporates a 48-volt belt-integrated alternator/starter that recovers electric power during deceleration and stores it in a lithium-ion battery. It deploys that energy to an electric supercharger that supplements the twin-scroll turbocharger to boost engine power to a rated 395 net horsepower and 406 lb.-ft. torque to push the Defender to 60 mph in just 5.8 seconds.

With either powerplant, the Defender employs a conventional ZF 8-speed planetary automatic transmission, whose hydraulic torque converter is ideally suited for the kind of high-torque, low-speed off-road duty a Defender might see. It drives through a locking two-speed center differential to the front and rear axles.

Traction in treacherous conditions is maximized by a new computer-controlled braking system that has much finer control of wheel speed than the old system did, explained Wilson. The new brake-by-wire system can trigger traction control and emergency braking systems in just 150 milliseconds, which is half the time of the old system.

“It is all about traction in off-roading,” said Wilson, “and with this system we can precisely control wheel speed.” The old system lacked the precision to control the wheels at the critical very low speeds necessary for successful off-roading, he said. “The new system makes the amateur off-roader look like an expert,” Wilson boasted proudly.

EVA 2.0 lends the Defender intelligence about its circumstances. So while the array of cameras help the driver see, with features like a 3D surround camera and ClearSight Ground View transparent hood, they also give the onboard computer eyes too.

The Wade Sensing identifies when the Defender plunges into a stream and takes automatic action suitable for the conditions, Wilson explained. That includes battening down the hatches, in the form of closing off the HVAC air intakes, for example. And it can tell when you leave the water too, and then it drags the brake pads on the rotors a bit to dry them so they are immediately ready for any on-road challenges that arise. “It just makes your life easier,” by automatically doing things drivers might have had to think about before, said Wilson.

By doing so, the engineering team hopes to embolden customers to actually tap the Defender’s capabilities. “We want people to be actively exploring what this car can do,” he said.

Land Rover has established rigorous new tests that let it verify the new Defender's durability in a consistent way, said Wilson. “It is a new test regime that is more stringent and exacting than anything we did before,” he said.

Tests include driving into a ditch and repeatedly crashing over an eight-inch curb at 25 mph to prove the Defender’s robustness. Reviewing the slow-motion video of these tests, it is possible to discern the shock wave of the curb impact rippling through the Defender’s body, he said.

Similarly, the electrical system is subjected to enhanced validation testing as part of Land Rover’s new $45 million validation facility. The aim of these modern upgrades to the old warhorse is to preserve the Defender’s ability to put a smile on the face of its driver, said Wilson, while simultaneously making it easier and more comfortable to use.

Deliveries of the Defender 110 are slated to begin in spring, with prices starting at $49,000 for the base model with the P300 drivetrain. The range will top out with a starting price of $80,900 for the Defender 110 X P400. Defender 90 models will follow later in the year.