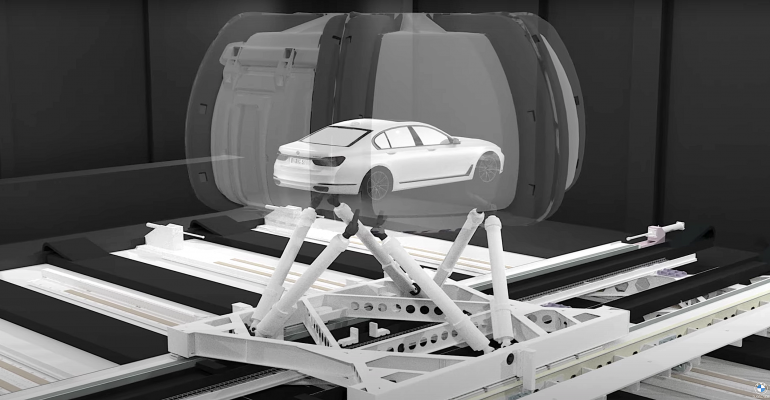 BMW’s new Group Driving Simulation Centre boasts 14 simulators and usability labs in a brand-new $105 million, 123,000-square-foot building at the company’s Research and Innovation Centre, and Design News had the opportunity for a tour of its impressive facilities.

The huge increase in simulation capacity will let BMW convert much physical testing to simulations, which can be done less expensively, more quickly, at any time of day, in any season, and much earlier in the vehicle development process, explained Martin Wahle, head of Virtualization and Driving Simulator.

There is a driver inside a car that is inside the hexapod. The car faces to the right and is swerving through a slalom to produce large movements in BMW's Sapphire simulator.

There is a driver inside a car that is inside the hexapod. The car faces to the right and is swerving through a slalom to produce large movements in BMW's Sapphire simulator.

“We use this especially in the early stages of development,” before physical prototypes are available, he said. “This gives us a lot more input than traditional simulation models.”

In fact, the company aims to add later parts of the vehicle development process to the simulation center’s to-do list. “We want to expand into implementation and verification modes,” Wahle said.

There are a variety of different kinds of simulators in the center. This is because, not only is it prohibitively expensive for every simulator to be a top-of-the-line moving hexapod, but some factors are actually better tested on smaller, simpler simulators, he said.

The flagship simulators are the large hexapod-mounted systems. Those feature a dome with a car inside, with the virtual world projected 360 degrees around the car, creating a realistic virtual world for the test driver inside the car.

Another kind of simulator has a wraparound 220-degree LED wall in front of a car that sits on a platform that can tilt but doesn’t move around like the full hexapod systems. This is called the Vega Vector dynamic simulator, and the center has five of these. And there are numerous smaller simulators that employ a stationary mockup of a prototype, with projector screens placed in front of it.

While the building was finished in Spring 2021, it has taken time to assemble and test all of the simulators inside it. “These simulators don’t build themselves, so we put quite a lot of work into them,” Wahle said. With most of that work done, the center is just beginning its first real experiments.