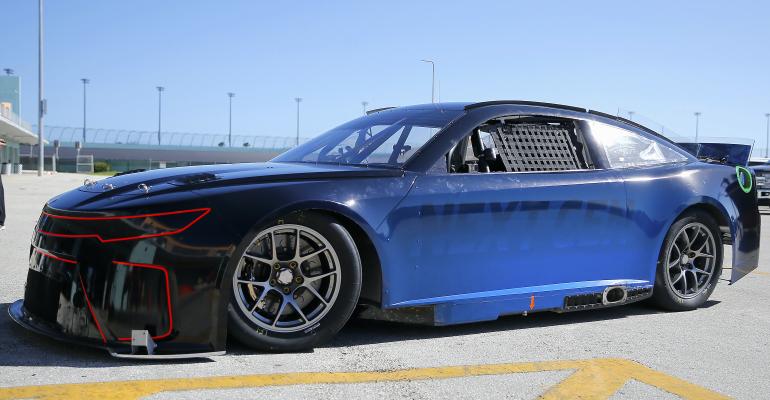 NASCAR is testing prototypes of the new “Next Gen” cars the popular stock car racing series will run starting in 2022 and running into some unexpected surprises along the way. This is why products are tested, refined, and improved before settling on the ultimate specification for release to customers.

Motorsport is grappling with relevance in a world where personal transportation is rapidly electrifying. Car manufacturers provide crucial support to racing series, but as the cars on the track diverge ever further from those in the showroom, so-called “stock cars” in NASCAR races seem out of step with the battery-powered future of the cars arriving in showrooms.

Recognizing that, NASCAR officials have charted a course using new specifications for next year that will require that cars be built from nearly identical off-the-shelf parts from established suppliers, with the goal of containing the cost of building the cars. This strategy should also limit the development potential of the Next Gen cars, which will theoretically help teams avoid costly development arms races to maintain their competitive positions.

Many of the parts used in the new cars are already used by stock-bodied cars in other series, most notably Australia’s V8 Supercars series. While V8 Supercars, International Motor Sports Association (IMSA) sports cars, and other similar series race on road race courses, NASCAR is primarily an oval racing series, and this difference presents some unexpected challenges.

NASCAR’s Next Gen car borrows the single-nut centerlock wheel design seen in other series rather than the familiar five-lug bolt pattern that is borrowed from the cars in our driveways. This will make tire changes during pit stops faster and simpler, though these new 18-inch aluminum wheels will inevitably cost more than today’s 15-inch steel wheels.

The change of wheel diameter will present a significant new challenge to exclusive NASCAR tire supplier, Goodyear Tire & Rubber Co., which will conduct four track tests during the first half of 2021 to dial in the construction and rubber compounds needed for the variety of tracks NASCAR uses. 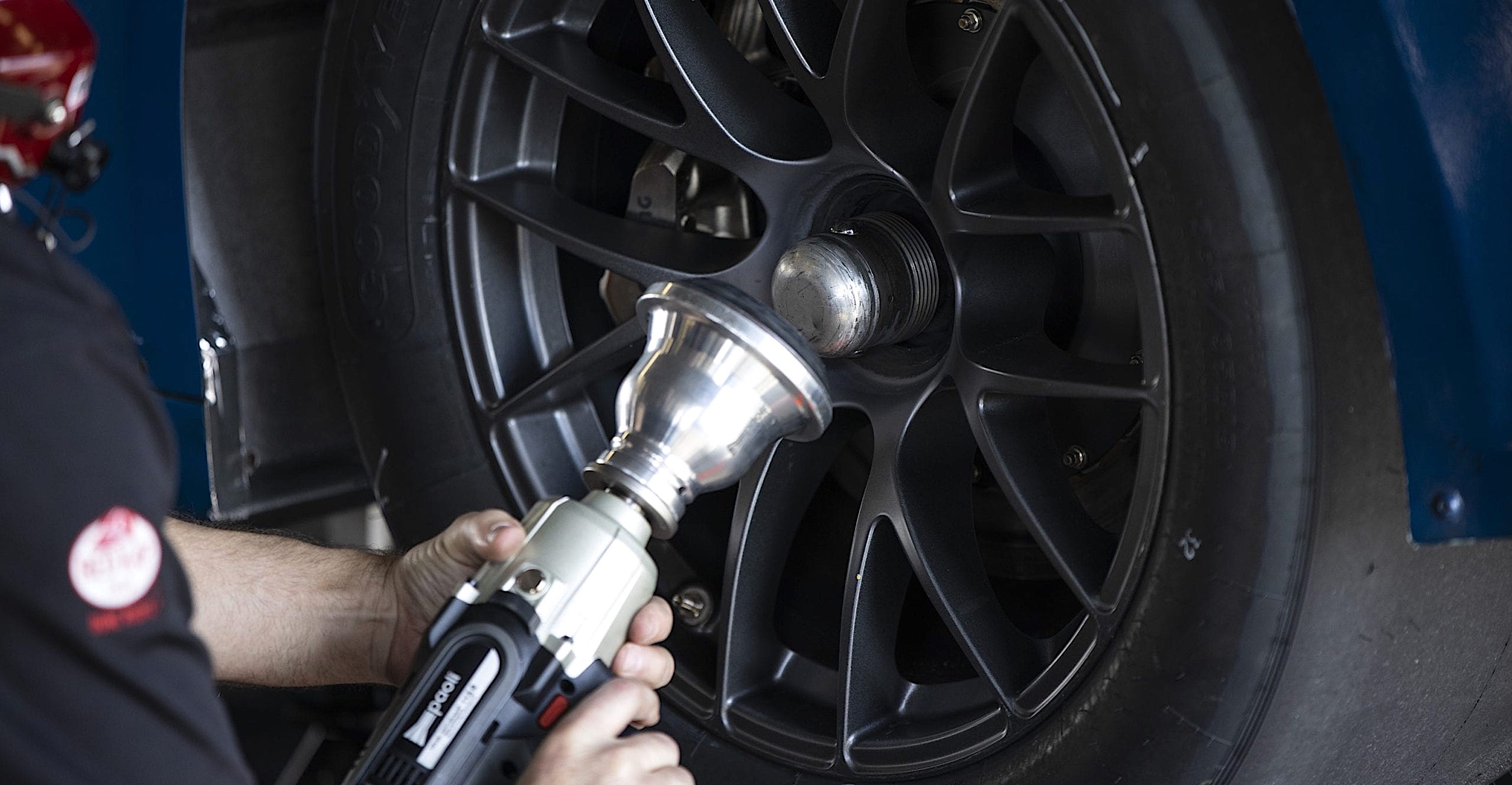 NASCAR has added additional road races beyond its traditional two events at Watkins Glen International raceway in New York and Sonoma Raceway in California, so the larger-diameter wheels permit larger brakes that will be helpful as the drivers must brake and turn right in addition to the usual high-speed left turns on the oval tracks. Photos from tests show the brakes to be supplied by AP Racing.

“The brakes are terrific and I know this isn’t even a short-track set-up, but they stop extremely well,” observed Roush-Fenway Racing driver Chris Buescher following a test in the prototype Next Gen car. “There’s not going to be any issues getting to pit road and not having the stopping power, just going to be a matter of not spinning out.”

Similarly, photos from tests reveal that the Next Gen cars feature an independent rear suspension system in place of the current sold axle design, which will improve the cars’ handling on the road courses.

NASCAR is sticking with manual transmissions with clutch pedals for the Next Gen design, but these will be sequential manual transmissions that move up and down through the gears motorcycle-style, rather than using a traditional H-pattern shifter. This provides for faster, surer gear changes that should save teams money from reduced mechanical damage from fewer missed shifts.

Those shifters will require a bit of adjustment from the drivers, Buescher found. “It’s a little bit of just mind over matter as far as shifting, trying to make sure you keep pulling backward [on the shifter] for the sequential stuff, which was really neat,” he said. “I really enjoyed using it and got better as it went, learning what it can and can’t do there by the end.” 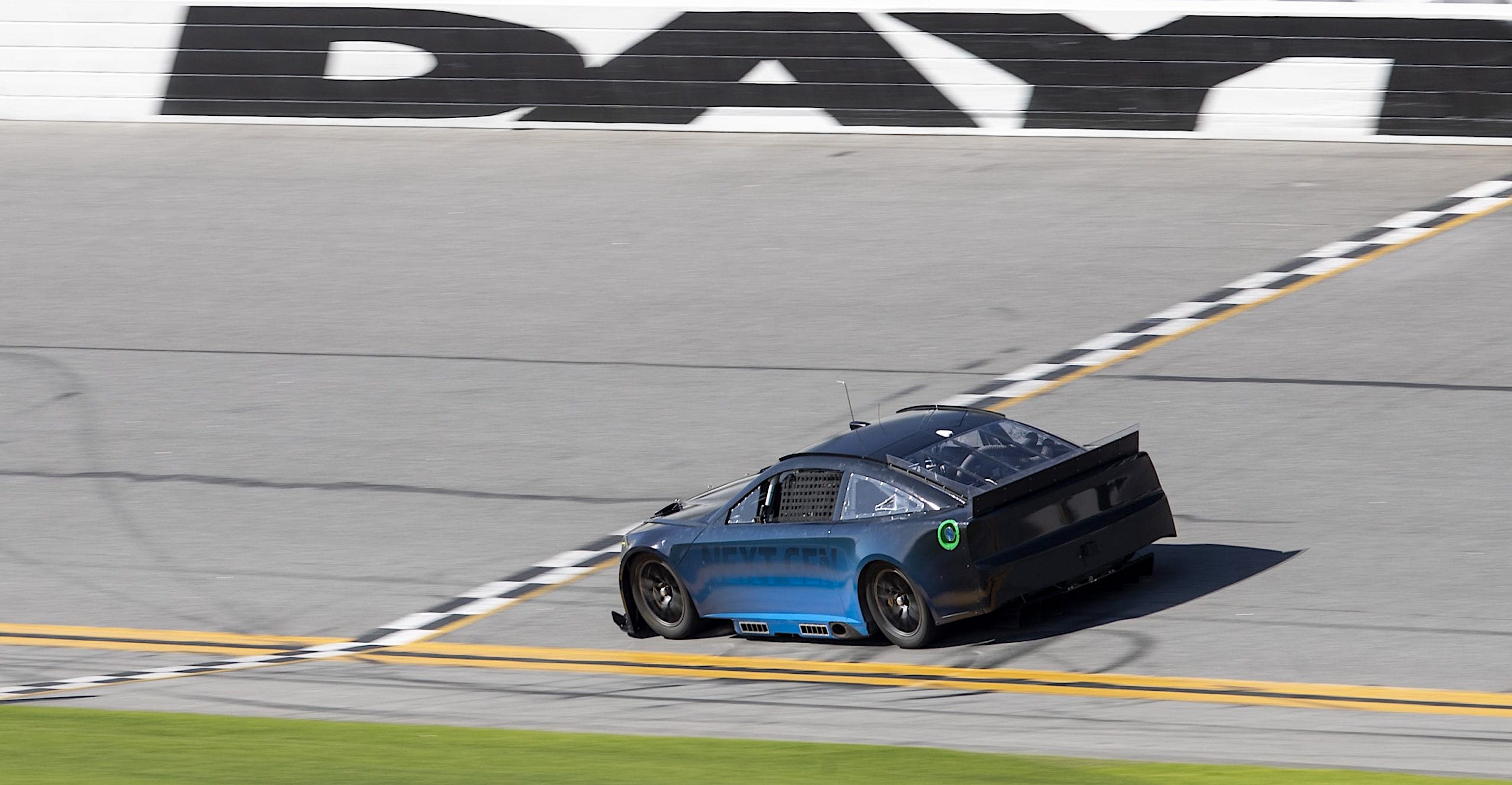 A change that has had unexpected repercussions is a move from the current recirculating ball steering box to the kind of rack-and-pinion design that is now universal on production cars. The car performed well on the early road course tests, but drivers were shocked by the steering performance when they started driving Next Gen prototypes on NASCAR’s signature high-speed ovals, which place very different demands on the steering.

“The first test session was on the roval (this is the nickname for the infield road course within oval tracks like Daytona that use parts of the oval), so it was on the road course, where there are not a lot of corners with high loads,” explained Stewart-Hass Racing driver Kurt Busch following an oval track test at Daytona. “The high-load issues with the steering were discovered on the oval.”

NASCAR had tested the Next Gen car in individual tests and wanted to try running two of them together to study their behavior in the aerodynamic draft, but the steering made driving so close to another car harrowing.

“The feel in the steering was so far off that it made [Joe Gibbs Racing driver Martin] Truex and I look at each other awkwardly, like, we’re gonna be on tiptoes around each other with the sequence of trying to learn the aero,” he said in an interview. “That was an eyes-wide-open moment for NASCAR, for the teams, for the other drivers who were asking me about it.”

The purpose of such tests is to identify and address exactly these kinds of problems, and that’s what the team did, Busch reported. “The improvements we made were in the steering to, number one, be able to handle the loads of the oval and number two, give it the proper feedback to [be able to] dial in the setup, and then number three. One big thing I’m trying to keep track of is that I know different drivers’ driving styles and some people like faster steering boxes, some people like slower, some want less feedback through the wheel, some want more.”

If the Next Gen cars’ final specification is one that functions only within a very narrow range of adjustments, the resulting performance will suit a similarly narrow group of race drivers’ preferences, Busch pointed out. So the development program needs to keep expanding the range of adjustability so that all drivers will be satisfied with the ability to make the new cars drive the way they want them to. “It is a driver preference and we need to get that big box opened up for everybody to choose what they want,” Busch noted. 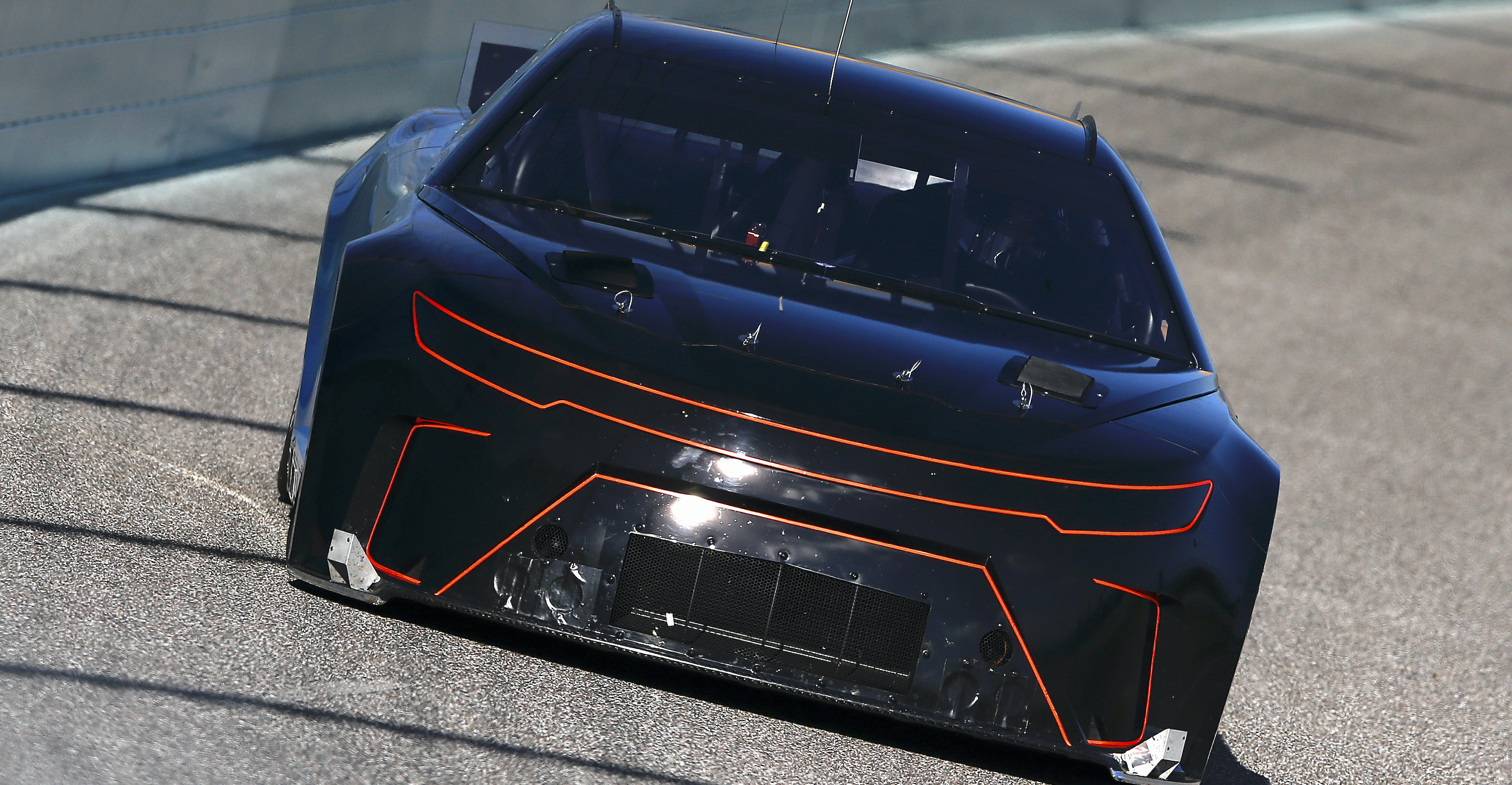 For all of the testing so far, the Next Gen car has worn generic, non-manufacturer-specific bodywork with graphics that look suitable for the Batmobile.

However, the different loads on the oval also revealed shortcomings in the power steering assist system, where the system lost boost pressure and steering suddenly became much harder. “We came into a couple of sequences where there was a lack of pressure through the steering valve and the T-bar that was designed and engineered as a change didn’t work properly,” he said.

This illustrates the many reasons that it is important to test new designs in their intended environment, he pointed out. “Some of it is troubleshooting. Some of it is just getting a feel and some of it is just creating a box where everybody will be able to find what they need within the system.”

NASCAR’s tests are serving their purpose, he added. “Where we were and where we are now, it has been great progress.”