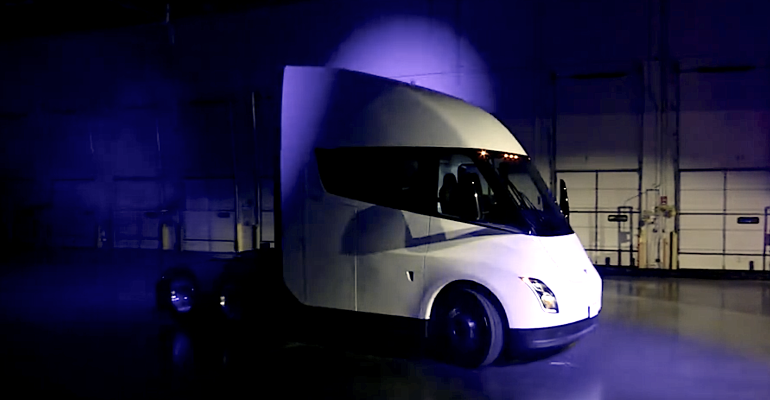 The production Tesla Semi makes its long-awaited debut on stage.
The Semi commercial truck is for short-haul jobs, not cross-country shipping.

“I can’t believe it’s been five years,” exclaimed Tesla boss Elon Musk as he took the stage to introduce the production version of the Tesla Semi being delivered to pilot customers Pepsico and Frito-Lay three years later than promised at the first Semi press conference in 2017. “There’s been a lot that’s happened since then, to say the least,” he added.

The Semi will be available in both 300-mile and 500-mile driving range versions, and the company showed a video of the truck traveling 500 miles while pulling a load that totaled its maximum allowable 82,000-lb. gross combination weight. However, the driver’s hat obscured the speedometer in most of the video, casting doubt on the speed the truck was driving during the demonstration, in which it stays resolutely in the right lane and is passed by other trucks. 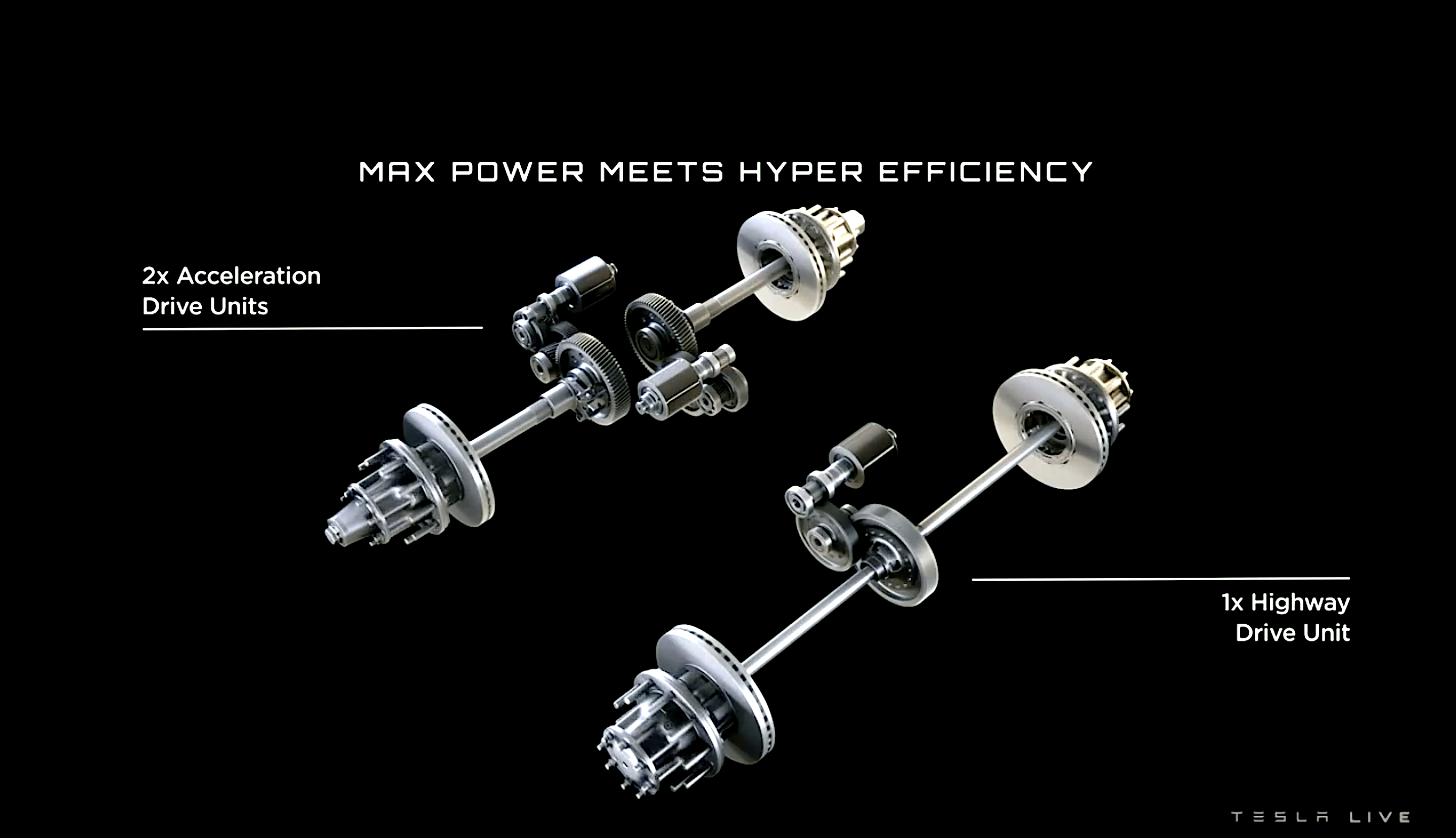 “It is not like, ‘What tricks did they pull?’” Musk insisted. “There were tricks we could have pulled and didn’t.” Maybe so, but a video claiming transparency that isn’t transparent doesn’t support that assertion, least of while when the company doesn’t release the battery pack capacity.

The company did say that the truck’s efficiency is 1.7 kilowatts per mile, so to go 500 miles it would need 850 kilowatt-hours. As we learned driving the 205-kWh GMC Hummer EV, large batteries demand strong chargers to refill them in a practical amount of time. Tesla announced plans for 1-megawatt chargers for the Semi and the planned Cyber Truck pickup.

To push so much power through a reasonably sized cable required some ingenuity, according to Dan Priestly, senior manager for Semi truck engineering. “You’re immersing the conductor in the coolant,” he said, explaining that the new chargers will bathe the cable’s conductor in a water-based coolant to permit a thinner conductor. “We can shove a lot of current in a very small space. This is key for high-power applications.” 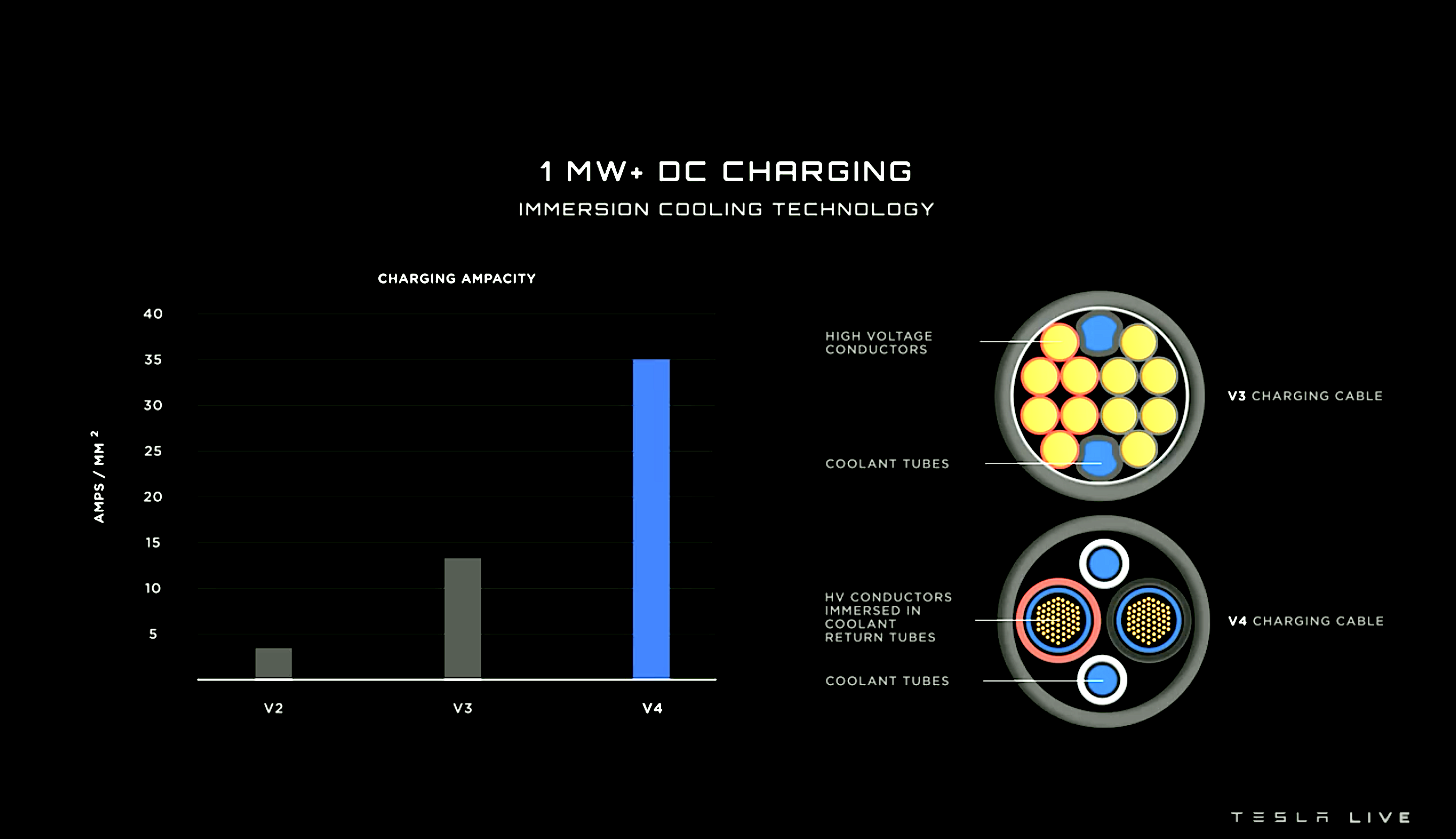 The Semi employs a 1,000-volt battery pack that contributes to both its driving range and ability to charge quickly, Priestly said. The company says that this will bring the approximately 850 kWh pack to a 70 percent charge in 30 minutes. That would be 595 kWh of juice in half an hour, which would be roughly five times faster than the 105 kWh we were able to put into the GMC Hummer EV in 24 minutes using a 350 kW Electrify America charger, so it seems like this could be a bit of Musk’s signature exaggeration, but we’ll see.

The Semi employs a trio of electric motors, with a single motor providing continuous primary power on the leading axle on the rear pair and the two helper motors acting on the rearmost axle as needed.

“In this tri-motor system, one of them is constantly engaged,” said Priestly. “This is for maximum efficiency. That one’s doing the bulk of the work and it is operating at the peak efficiency point of the entire drivetrain. The other two units are for torque and acceleration.” Those two motors have clutches to disengage them when they aren’t needed so that they don’t apply any parasitic drag to the drivetrain.

When all three motors pull together, they can propel the Semi up a 5 percent grade at 65 mph while hauling the truck’s maximum 82,000-lb. gross combined weight.

The truck’s 300-mile or 500-mile range options are suitable for many trucking routes because 80 percent of truck routes are 250 miles or less, according to Tesla. The Semi has a day cab, with no sleeper behind the driver because it isn’t intended for the long-haul work that necessitates such equipment. Tesla Semi drivers will sleep at home each night and drive short routes from a distribution hub such as those employed by Frito-Lay and Pepsico.