There's More to Love in the 2021 Jeep Grand Cherokee L 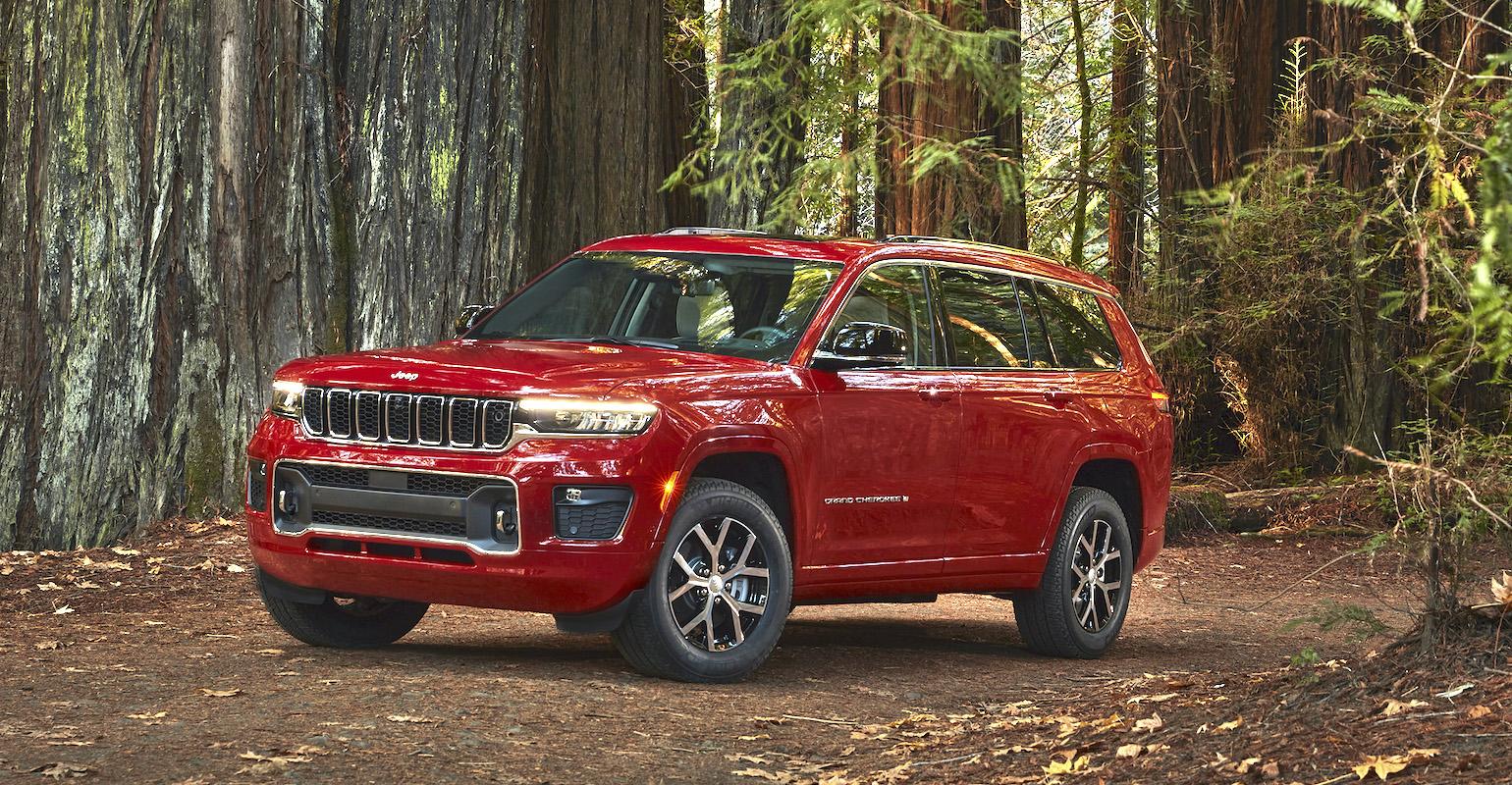 Jeep’s Grand Cherokee has been a top-selling SUV since its debut in 1993, but its pool of potential customers has always been limited by its two-row, five-seat configuration. Jeep is addressing that issue for 2021 with the launch of an all-new Grand Cherokee that debuts first in a new three-row, seven-seat form, dubbed the Grand Cherokee L.

Stretching a vehicle’s platform to add another row of seats may not seem like a significant engineering undertaking, but doing so presents challenges for interior packaging and for preserving Jeep’s signature off-road capability.

A previous three-row effort, the 2006-'10 Jeep Commander, was essentially a stretched Grand Cherokee and was designed with exactly the same customers in mind as the new Grand Cherokee L. That vehicle failed in the marketplace because of the engineering compromises that were necessary to add a row of seats without extending the wheelbase compared to the Grand Cherokee.

Furthermore, the excessive rear overhang from the rear axle to the bumper containing the third row of seats reduced the Commander’s departure angle, so its rear bumper was vulnerable to scraping on the ground as the vehicle clambered off obstacles.

And that third row? The Commander’s so-called uni-frame construction had frame rails beneath the floor, lifting the back seat up high so that occupants had little headroom and their seats, obstructed the driver’s view out the rear. 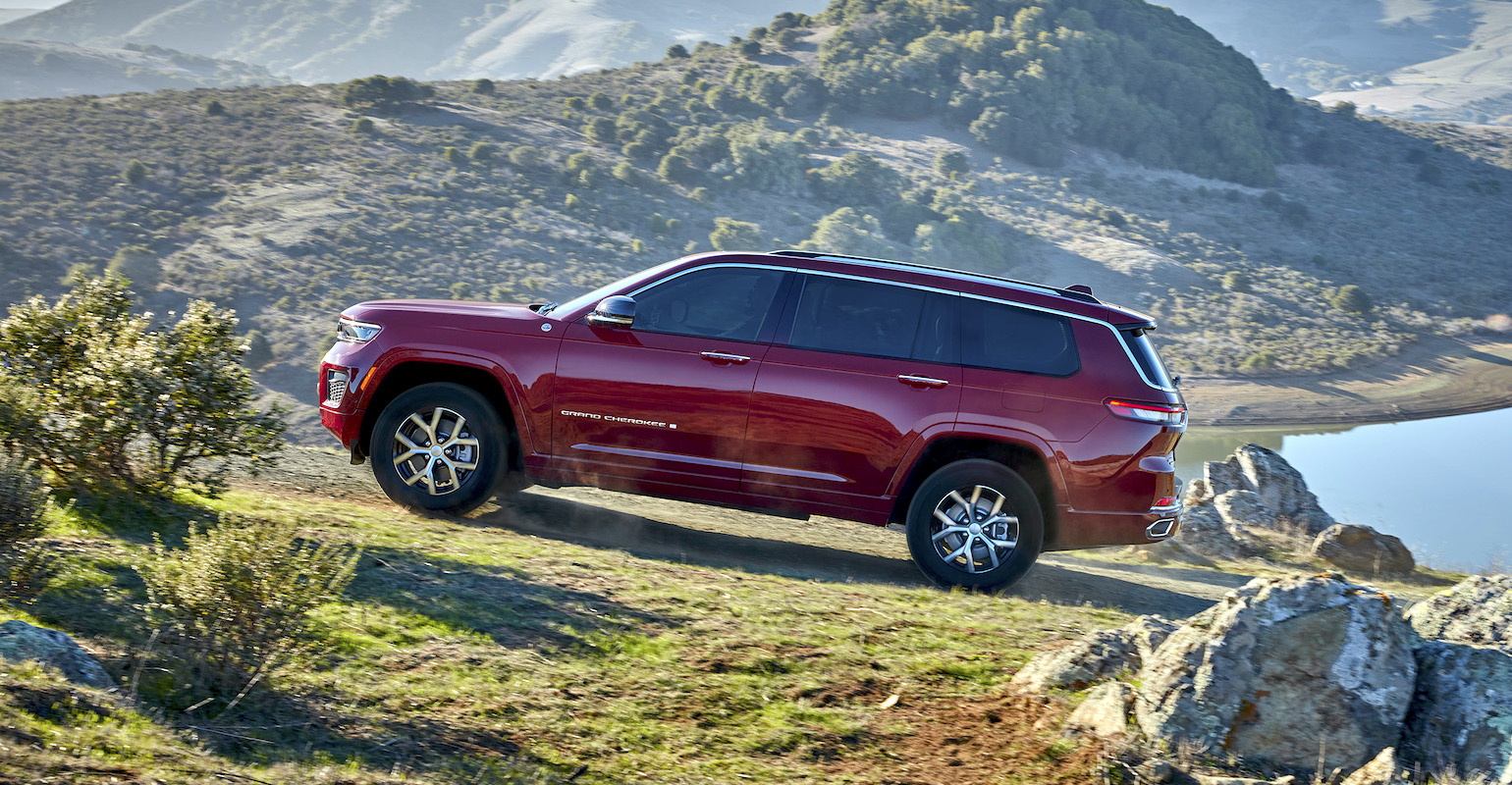 Not that the third row was really useable, because access past the second row was also limited by the high floor. It was a lose/lose/lose solution to packing more occupants into the Grand Cherokee’s platform.

The “L” model features an approach angle of 30.1 degrees, a break-over angle of 23.6 degrees, and a departure angle of 22.6 degrees and each of those numbers is as good as, or better than, the two-row Grand Cherokee’s specifications, Grado reported. 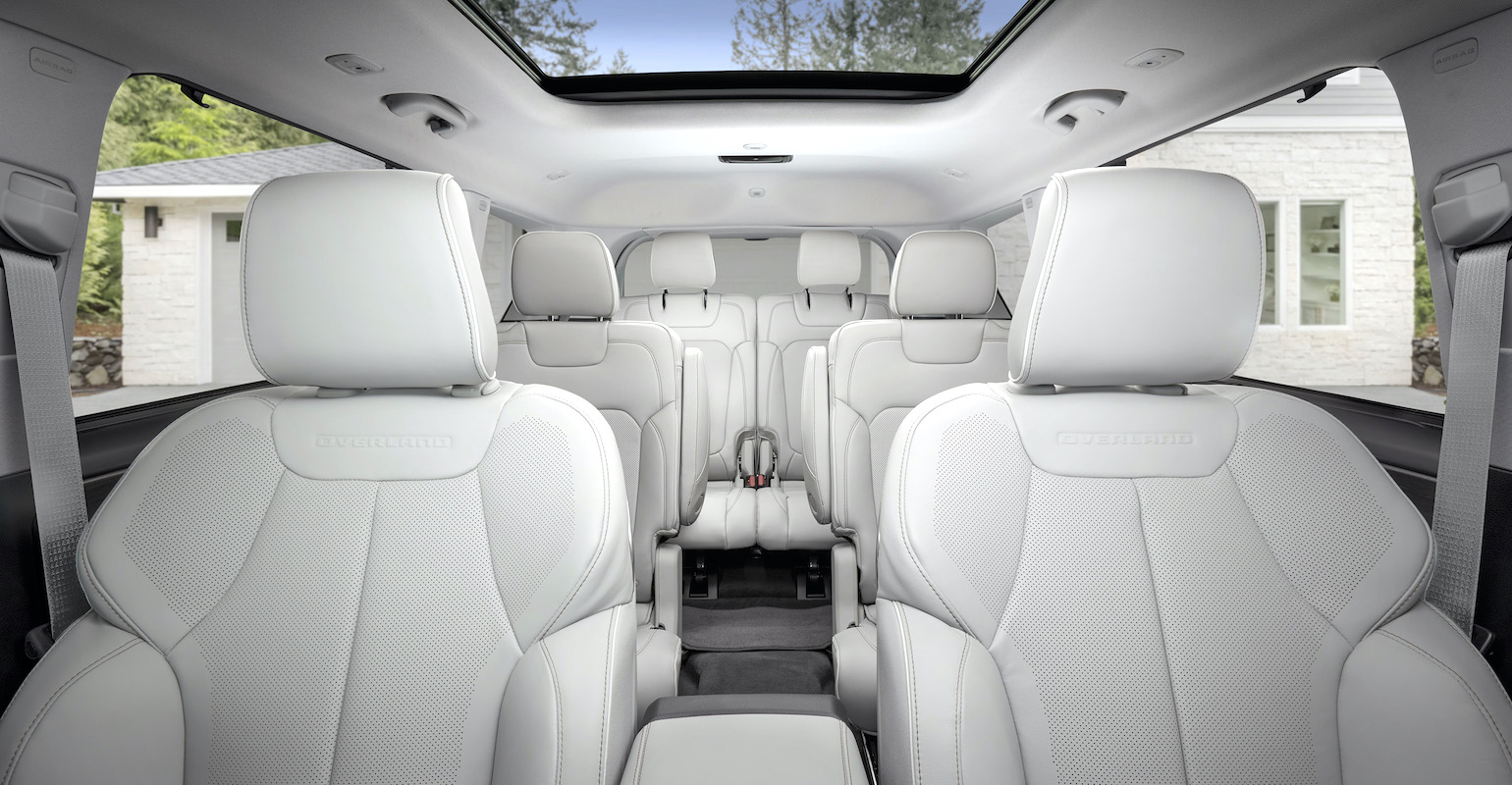 The old model would boost corners one at a time, creating the effect Grado terms “camel humping” as the vehicle rose unevenly. The added ride height contributes to more water fording depth, which has increased by four inches, to 24 inches.

Forward visibility in the new model is also improved by 7 degrees, which is as valuable in the urban jungle where Grand Cherokee Ls will really see action as in the actual jungle.

In terms of capability, the 2021 Grand Cherokee L has the same 7,200-lb. tow rating as the regular two-row machine, and it is available in a Jeep Trail Rated configuration that adds the necessary skid plates, tow hooks, and all-terrain tires needed for true off-road service.

To prove this, the Jeep engineering team took prototypes to the usual test locations. “We crisscrossed the U.S., Mexico, and Canada and went to Dubai,” Grado said. Significant U.S. test venues were the long grade at Davis Dam, in Arizona, which is considered the ultimate test of trailer towing capability, and to Moab, Utah, where the rock crawling is the toughest.

“The final exam is Moab,” he recalled. “We’ve been there, we’ve conquered Moab.” Professional off-road guides there were dubious when the Jeep team arrived that the big, three-row family hauler could cope with the conditions, Grado reported.

“They said, ‘It looks really big, its gonna get stuck out here,’” he said. “But it didn’t get stuck. We’re quite proud of that.” 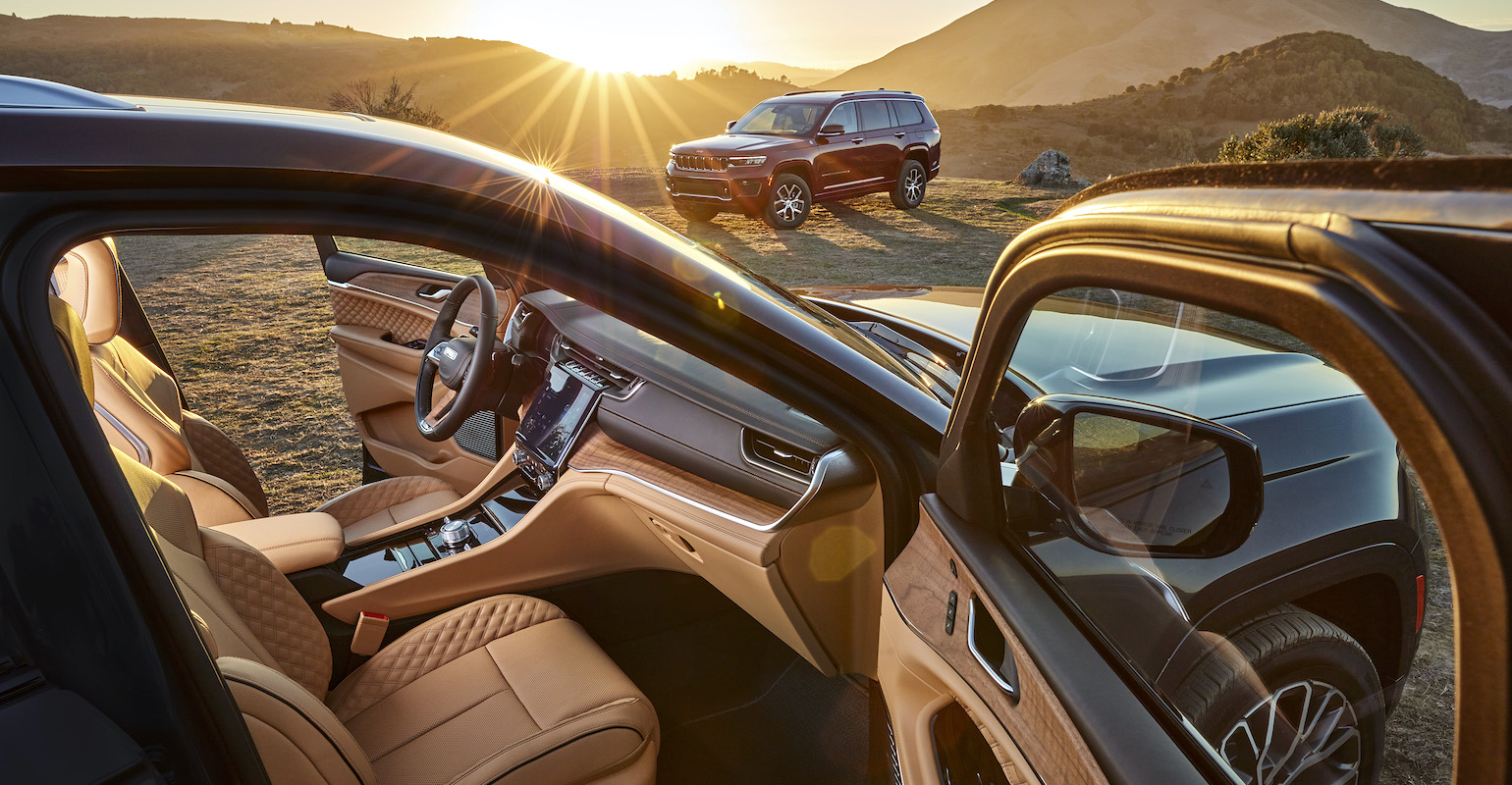 This is thanks to the Grand Cherokee L’s super-low 44:1 crawl ratio on the two-speed four-wheel-drive transfer case with a rear differential capable of putting 100 percent of the engine’s torque to a single rear wheel if needed. The five different settings of the vehicle’s terrain modes control variables that include the automatic transmission’s shift map, the engine speed, the transfer case’s locking, and second-gear starts in snowy conditions.

These capabilities, minus the issues that plagued the Commander, were possible because of the Grand Cherokee L’s use of a unibody platform rather than the Commander’s uni-frame design, which is much more space-efficient, according to Grado.

This all-new platform carries over no content from the previous-generation Grand Cherokee’s design, which dated to 2011. The new design boasts extensive use of high-strength steel, aluminum cross members in the unibody as well as aluminum bolt-on parts such as the hood, rear hatch, and engine cradle. 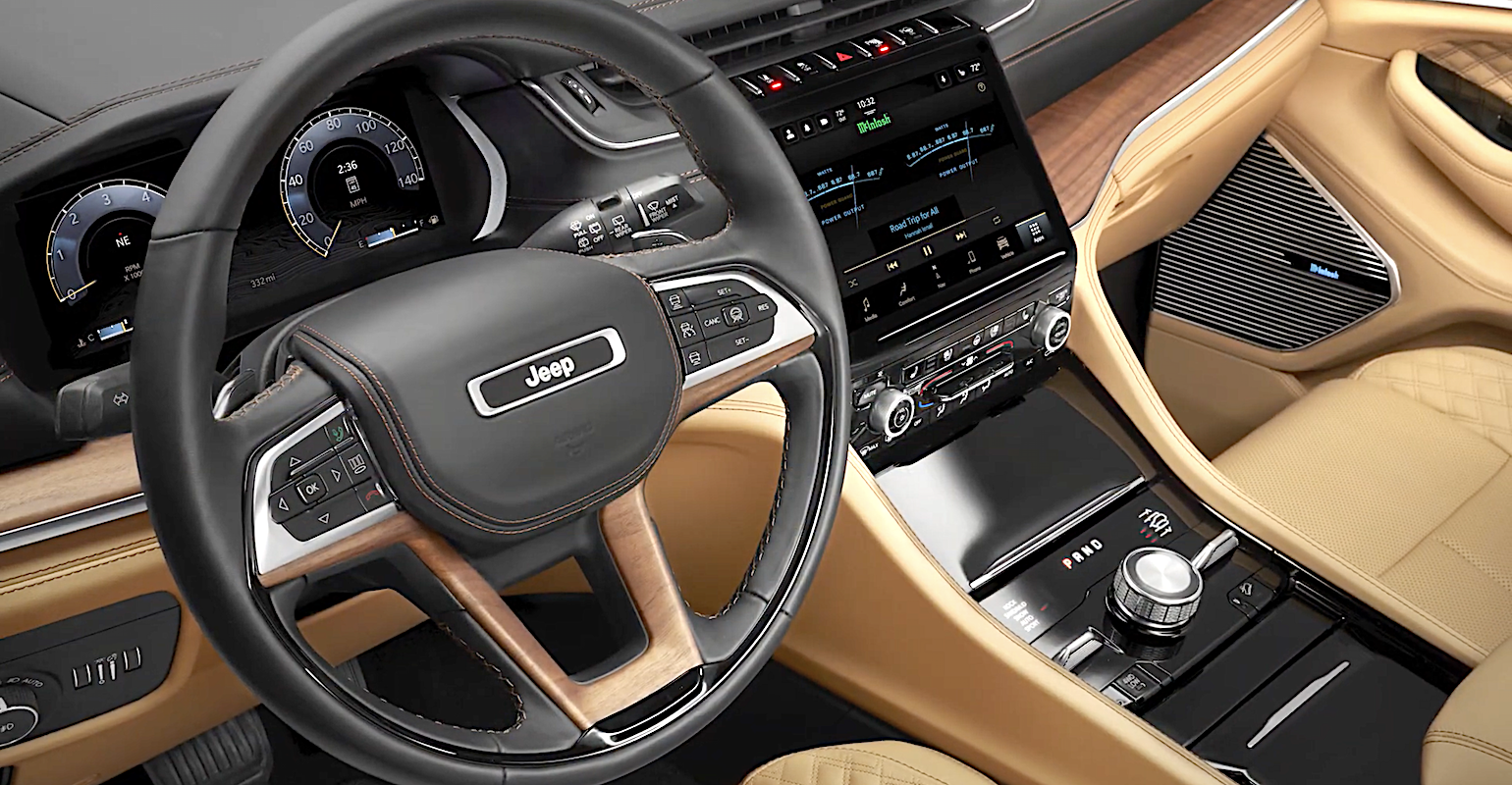 The Grand Cherokee L’s standard engine is a 290-horsepower, 257 lb.-ft. 3.6-liter V6, with an available upgrade to a 357-hp, 390-lb.-ft. 5.7-liter Hemi V8. Either way, the transmission is an eight-speed planetary automatic. The front axle can disconnect from the drivetrain to reduce friction and improve fuel efficiency when all-wheel drive is not needed.

In the cabin, the new Jeep features a 10.1-inch center infotainment display that controls, among other things, an optional 950-watt, 19-speaker McIntosh audio system. In a bit of unabashed engineer bait, they’ve designed the display to show retro-style analog VU power meters for the sound system, so obviously, we love it.