Tech Tidbit: Why Software-Defined Vehicles Are the Future 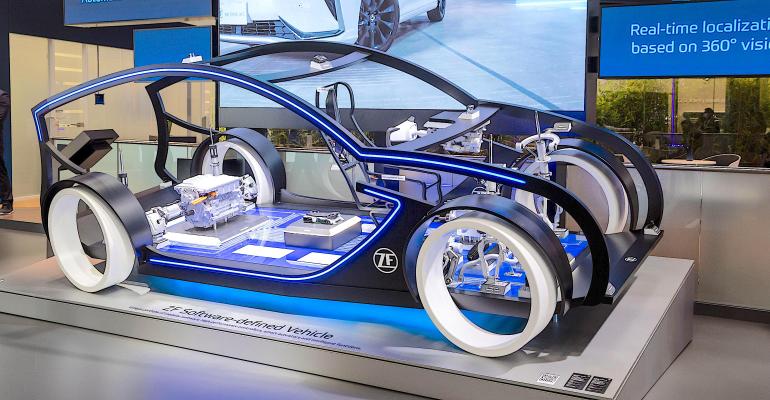 The ZF Group's software-defined vehicle exhibit at the 2021 IAA show in Munich.
Programmable computers are taking over many tasks previously done by dedicated hardware in cars.

The emergence of cars whose functions and capabilities can change and improve over time thanks to over-the-air software updates can be likened to the smartphone market, according to Jan Becker, CEO, and co-founder of Apex.AI.

“Fifteen years ago everything was hard-wired. They had Some software such as simple browser,” Becker pointed out. Now, obviously, smartphones are personalized with the applications and settings users prefer, personalizing the devices to individual needs and gaining features with each software update.

“Translating that to the car industry, we had hard-defined vehicles,” he said. “With them, almost nothing changes over the life of the vehicle. Then came the Tesla Model S with software over-the-air updates.”

“Vehicles now are really powered through software,” remarked Wassym Bensaid, senior vice president for software development at Rivian. “It is no longer an afterthought. Software now is at the heart of the experience going forward with heavy technology content.”

The smartphone analogy is useful, but has its limits when applied to cars, Bensaid said. “A vehicle is much more complex than a smartphone,” he said. There is consideration of vehicle dynamics and safety that aren’t relevant to phones.

The shift to software definition provides two key benefits for carmakers, according to Becker. One is the ability to add functions or to correct mistakes after a vehicle has been delivered to the customer. The second is the ability for software developers to write code for a software platform rather than for a specific hardware device.

This is comparable to how the availability of the Apple iOS and Google Android mobile operating system platforms have cultivated ecosystems of apps that are independent of the specific hardware the apps run on.

These benefits will contribute to the market for software-defined vehicles ballooning from $34.2 billion in 2022 to $81.6 billion by 2027, at a compound annual growth rate of 19.0 percent according to MarketsandMarkets Inc. in its report, "Software-Defined Vehicles Market.”

The software itself will consume €1 billion by 2030, stated Günther Heling, director of embedded software and systems at Vector Consulting Services. By then cars will have 300 million lines of code and autonomous vehicles will run on a billion lines of code, he reported in his discussion, “Software-Defined Vehicles Need Software-Defined Companies.”

This shift means that car manufacturers will have to become software companies while retaining their ability to design, stamp, and assemble sheet metal. This will be tough, said Becker. “They are experts at designing and building a car, with no historic focus on developing software,” he said.

There are two reasons for this, according to Becker. The first is that car companies don’t have the developers they need to write all this code. He points to Toyota and Volkswagen starting dedicated software divisions as examples of companies working to overcome this shortage.

The second obstacle is the need for carmakers to change how they work with suppliers on the software for the components they provide. Because carmakers and suppliers each have their own repositories of software code, development is cumbersome as developers in each location make changes, and then the changes are reconciled, he said. The solution is for there to be a single repository for both groups to work from. “The OEM can do a build every night. The supplier has access to the latest state of the software at all times,” Becker said. 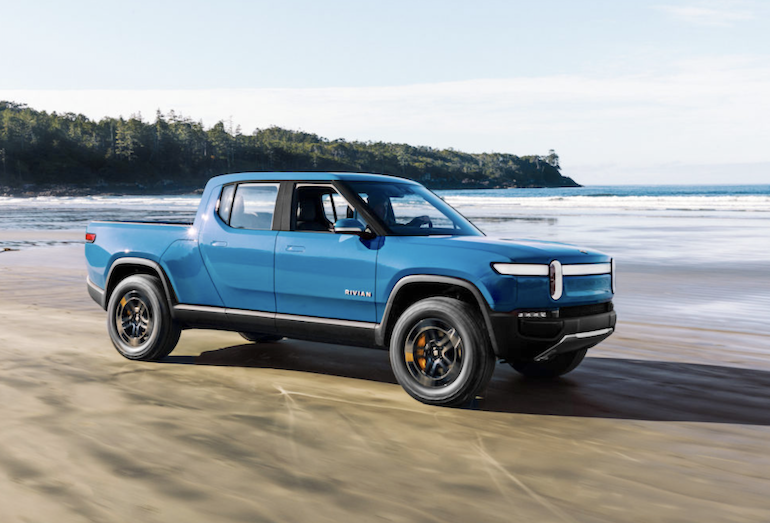 Rivian improved the R1T's performance in sand with a new dedicated driving mode for that surface.

“You need really strong software developers,” declared Bensaid. “OEMs need to be able to attract such strong talent to compete in this field. Very few companies today are able to attract this strong developer base.” This challenge contributed to Rivian’s decision to relocate the company headquarters from Michigan to Palo Alto, Calif., where it has a development center and to open a second development center in Irvine, Calif. Bensaid reports.

The expense of such efforts is the price of admission to the car market now, but moving to software-defined systems creates new potential revenue streams to help pay for the work, noted Robert Day, Arm Director of automotive partnerships for North America in that company’s ongoing “What is?” series of technical briefings.

“Some of the moves to software-defined is to meet the needs of our generation’s technology users, who expect that software will be upgraded over the lifetime of the hardware it runs on, but will also make it easier for the automakers themselves to manage the future capabilities of a vehicle, upsell features to existing customers, and then have the same features and function over their entire vehicle range,” Day said.

“Buying a vehicle was a purchase transaction,” said Rivian’s Bensaid. “Now the beginning of a journey with us with improving performance, efficiency, and features.

In addition to selling features that customers did not choose or that were not available yet at the time of purchase, over-the-air updates can boost customer satisfaction by retroactively addressing problems. After launch, we had feedback, that the vehicle was struggling in sand,” Bensaid recalled. “We defined a new strategy for sand and released Sand Mode last summer.”

Similarly, “welcome” features such as turning on the Rivian R1T’s lights automatically when someone approaches are decidedly unwelcome when the owner is camping in the deepest forest where people go to get away from glaring lights. Now Camp Mode keeps the truck from automatically lighting up or making unwanted noises.

The ideal cadence of updates is debatable, but Rivian has settled on monthly releases. “We have a regular cadence of monthly over-the-air updates,” explained Bensaid. “That is the right balance of velocity and quality control that provides very fast feedback.”

To avoid troublesome updates, Rivian staggers the vehicles to which it pushes new software rather than sending it to all of them at the same time. And before that, the new release is tested internally and through a small circle of customers before it is approved for general release. Additionally, the company is starting a beta program that customers can choose to participate in that will help vet changes and upgrades.

A key challenge is managing the resulting complexity of having software running everything. This is outlined in a primer produced by middleware experts ETAS, which was founded by Bosch in 1994.

“Software complexity needs to be managed for higher scalability across vehicle generations, even if the underlying hardware or operating system changes. In the software-defined vehicle, this is primarily the job of middleware and virtualization technologies that enable software modularity, hardware abstraction, and standardization, providing a safe and secure backbone for the entire platform.”

Failure to manage this complexity adds cost and delays the delivery of features to customers, said Apex.AI’s Becker. “The direct impact is that today, start-of-production is delayed because of software integration.

“The next big step is where those different software functions will actually co-exist on a large central computer, rather like the vehicle’s brain,” said Arm’s Day. “Again, the analogy with our computers and smartphones that have the performance to run multiple applications simultaneously. We’ll see a shift from application-specific domains to more of a zonal architecture where each different area of a vehicle will have a zonal controller that will communicate to the central computer that will run these software-defined functions,” he continued.

We’ll start seeing this in 2024, with this approach becoming ubiquitous by 2030, Becker predicts. The change is proving to be more challenging than carmakers anticipated, he notes. “Volkswagen has pushed back the date” for their debut of this approach, he said. “The larger volume, the longer it takes.”

To survive this transition, interested companies are participating in industry groups that are facilitating the development of standards and understanding. The Eclipse Foundation is a leading such organization. It was founded in 2004 as an independent not-for-profit corporation to allow a vendor-neutral, open, and transparent community to be established around the Eclipse integrated development environment.