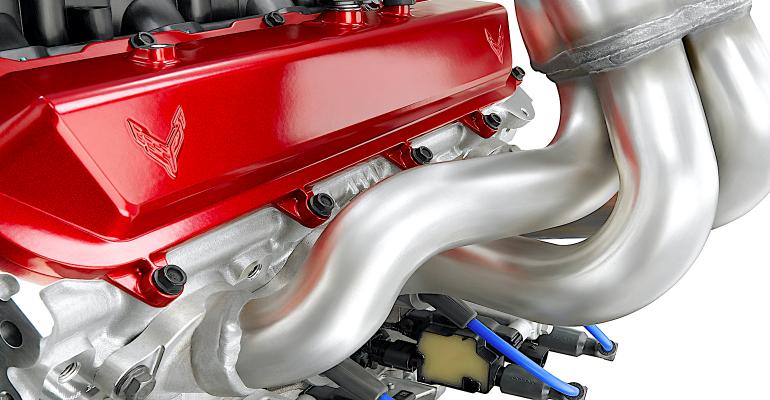 Contemplating the advantages of the pushrod-actuated overhead valve engine design in what appears to be the twilight of internal combustion might sound as anachronistic as a quick look at the value of coal-fired steam locomotives.

But design advances in these engines, particularly the larger-displacement V8 variety beloved by American drivers and automakers alike, mean that these engines boast advantages that seem certain to keep them relevant until the very end of combustion power.

Let’s start with some definitions. Overhead valve pushrod engines marked an advance over their predecessors, the flathead engines whose valves are located in the engine block alongside the cylinder. The Ford flathead V8 and the classic Briggs & Stratton power equipment engine are well-known examples.

These engines are compact, inexpensive to manufacture, and woefully inefficient because of poor airflow, combustion, and thermal characteristics. Flathead engines’ combustion chamber is wide and flat, covering the piston top and the valves, making combustion very ineffective. Consider it the opposite of the concentrated, semi-circular combustion chamber shape of the Hemi engines we discussed previously.

Additionally, the airflow into and out of the combustion chamber is indirect, as the air must make hard 90-degree turns. And the intake and exhaust ports are located adjacently on the same side of the cylinder, transferring exhaust heat to the intake charge, reducing its density and resulting power.

In a pushrod engine, long pushrods extend up from the camshaft to above the top of the cylinder, where they act on rocker arms to press inverted valve downward from the head casting. 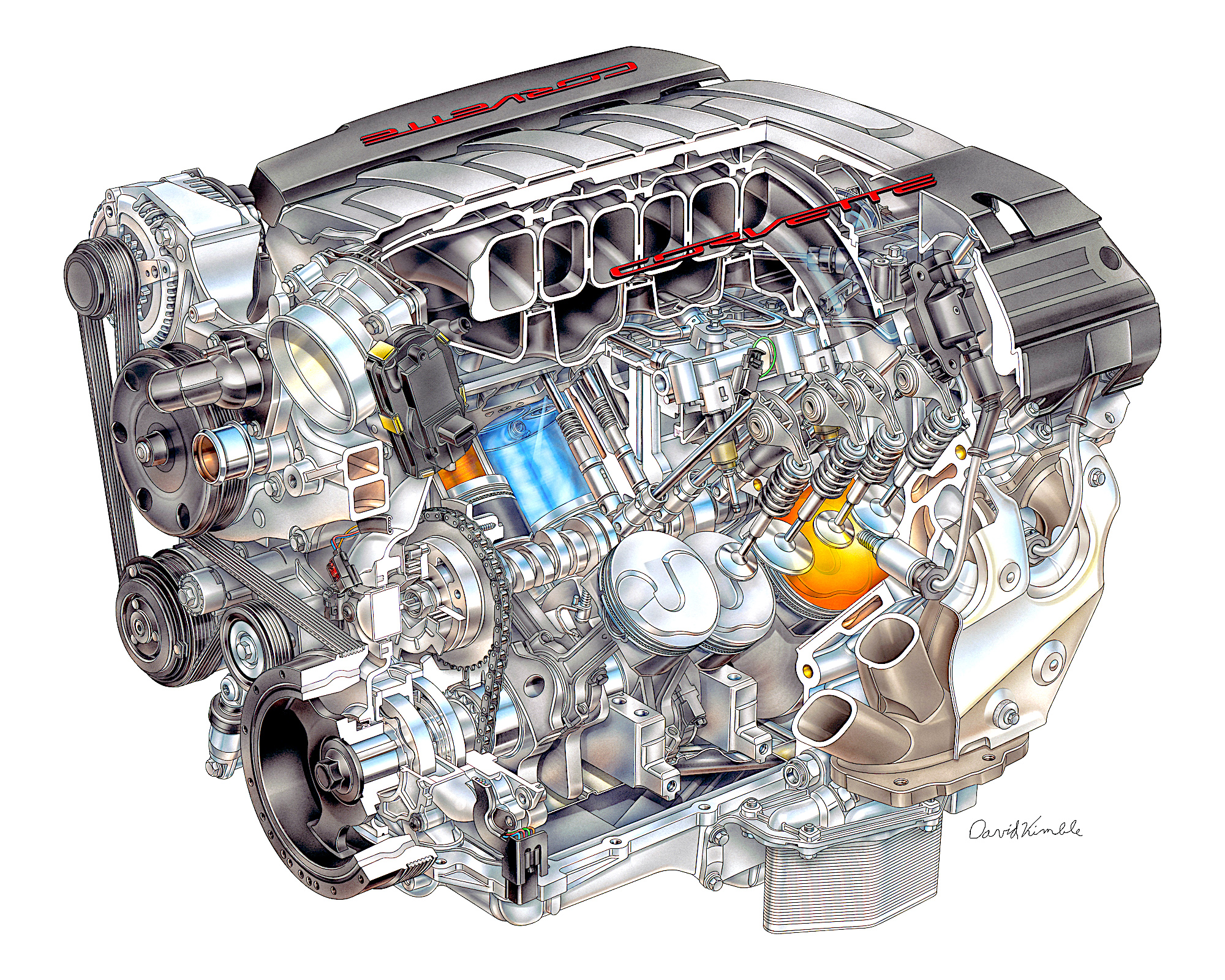 This cutaway drawing shows the General Motors LT1 V8 engine with its pushrods protruding up from the valley of its vee to actuate the valves atop the cylinder heads.

Lincoln and Cadillac debuted overhead valve pushrod engines shortly after World War II and the pushrod V8 went mainstream with the 1955 debut of the small block Chevy V8. Chrysler also introduced its famed Hemi V8 in the ‘50s, to much acclaim.

While the Chevrolet, Ford, and other V8 engines paired the overhead valves side-by-side atop a wedge-shaped combustion chamber, the Hemi, as employed by Chrysler Corp. and also by corporate siblings Rolls-Royce and Bentley, had semi-hemispherical combustion chambers with their valves splayed apart at angles instead of lying in parallel.

A downside to pushrod engines is, well, pushrods. And their associated rocker arms. The reciprocating mass of these parts limits the effective maximum revs the engine can spin because at higher speeds inertia will keep the valves from closing before the camshaft starts to open them again.

The solution is to locate one or two camshafts atop the cylinder head to act on the valves without pushrods and their associated inertia. This lets engines spin faster to make power and can make it easier to locate the valves properly for a hemispherical combustion chamber. Virtually all engines today are a double-overhead-cam variety.

But General Motors persists with the latest iterations of its small-block V8 engine and Stellantis’s Chrysler division not only still builds Hemi V8s, it keeps installing them into a wider variety of vehicles, such as the recently announced Jeep Wrangler 392.

These seemingly archaic engines persist for a variety of reasons. A pushrod engine is more compact than an overhead cam design, which stacks camshafts and the cam drive system atop the cylinder head. In a 90-degree V8 design, this creates a bulky engine.

Those parts add weight and the mass is high on the engine, raising the vehicle’s center of gravity. In a double overhead cam (DOHC) V8, there are four camshafts, two for each head, rather than a single cam in the bottom of the engine’s valley. These are heavy and require costly machine work, so overhead cam engines are more expensive to build.

GM says its LT1 small block V8 is 40 lbs. lighter than an equivalent twin-turbocharged 4.4-liter DOHC V8 making similar power and it is four inches lower in height for easier packaging beneath the hood.

Finally, the internal friction of overhead cam engines along with their characteristically higher engine speeds makes these engines thirstier than pushrod engines. This is routinely illustrated by the EPA fuel economy estimates of GM and Chrysler V8s, which are usually better than the OHC V8s from Ford and imported brands. 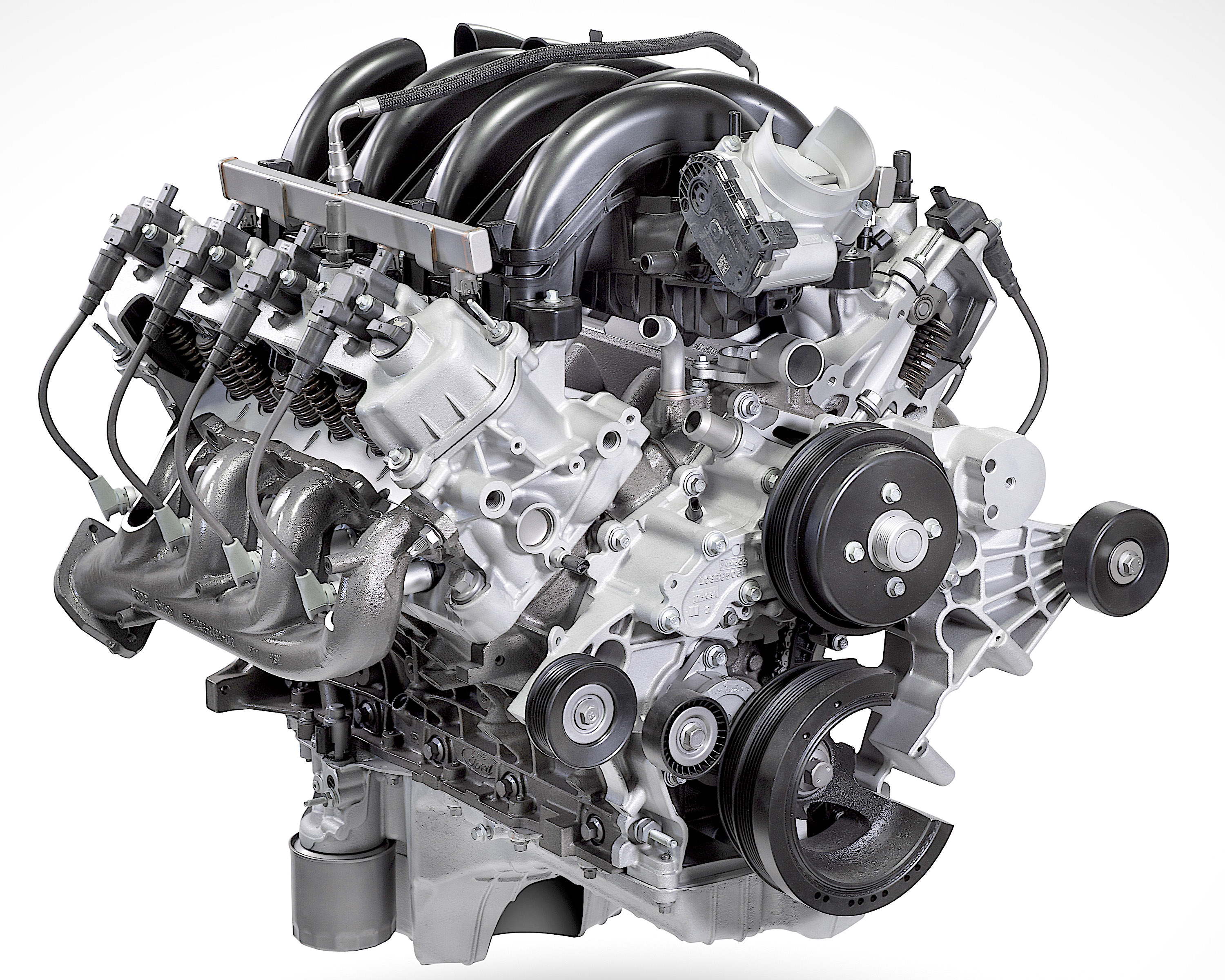 Indeed, Ford recognized this value with the introduction of its own big-block V8 engine design for trucks which is a pushrod engine rather than the overhead cams that Ford has used since its own small block went out of production in 2001.

One reason that pushrod engines were seen as obsolescent is that, well, they were old designs. When the same modern engineering and manufacturing technique applied to more recent OHC engines were used to design new, clean-sheet pushrod engines, the results were impressive.

Cylinder heads that were designed for use with carburetors left ample room for improvement when they were optimized first for port fuel injection and then later for direct injection. 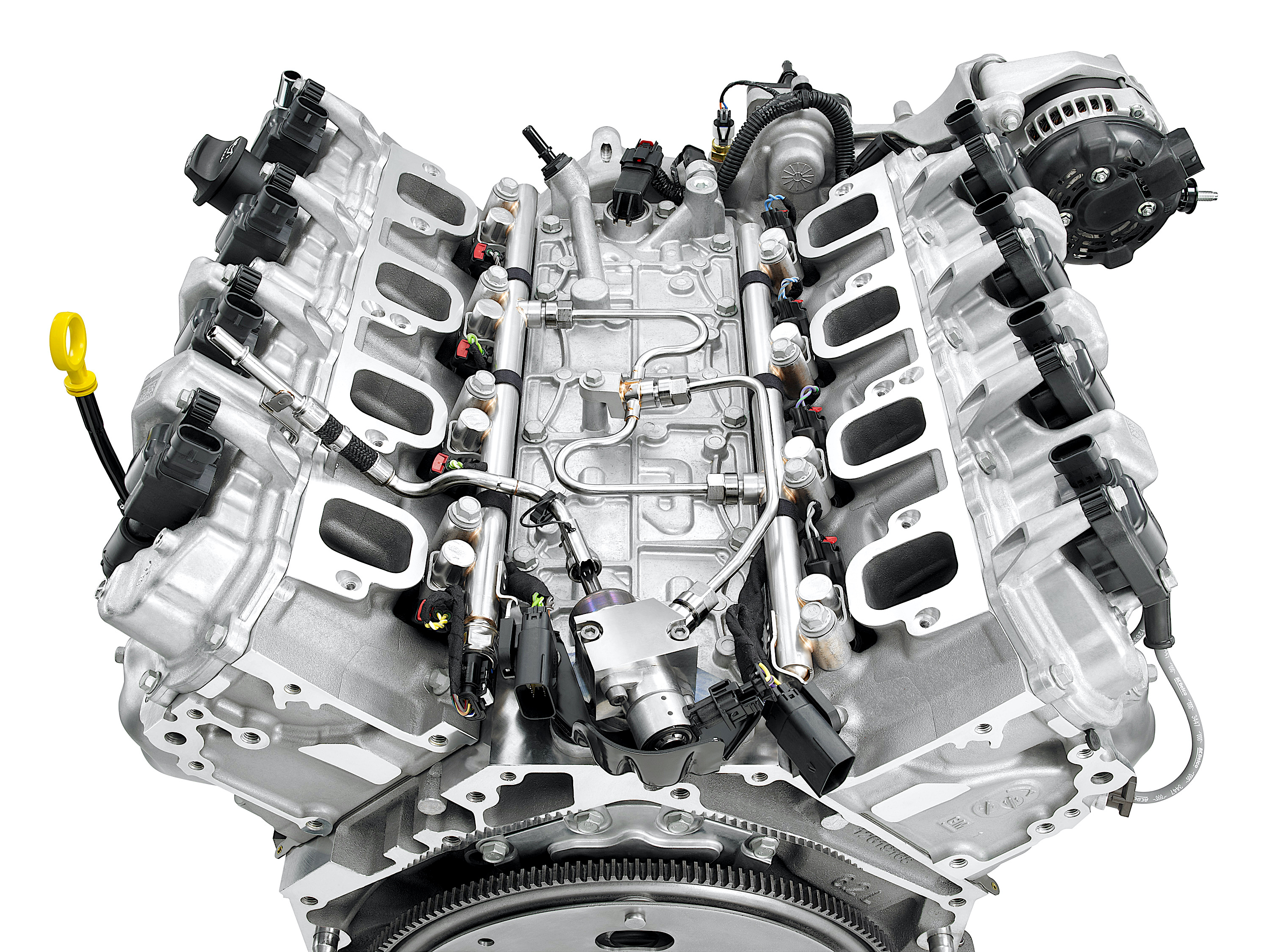 This General Motors LT1 engine's intake manifold has been removed to reveal the high-pressure direct injection fuel system installed in the valley of the engine's vee.

The high-pressure fuel pump is a source of unpleasant noise in direct-injected engines. The GM Gen 5 engine mounts that pump in the valley of the engine’s vee, where it is topped by the composite intake manifold. That intake manifold contains individual runners supplying air to each cylinder and the whole thing is wrapped in acoustic foam to suppress the noise of the fuel pump.

The direct injection system contributes to improved combustion efficiency through a more complete burning of the air/fuel mixture. This is achieved through the precise control of computer-modeled intake mixture motion and the spray pattern of fuel from the injector. A by-product of direct injection’s precision is a 25 percent reduction in cold-start hydrocarbon emissions.

The heat of evaporation absorbed from the combustion chamber by the vaporization of the liquid gasoline squirted in also permits higher compression ratios, producing more power from the same amount of fuel.

The GM LT1 engine runs an 11.5:1 compression ratio and features small combustion chambers with large, straight, rectangular intake ports that include a slight twist to impart motion to the intake charge as it fills the cylinder. The engine also swaps the position of the intake and exhaust valves from their places in the previous-generation engine, again to air with the desired intake swirl to better blend the air and fuel in the combustion chamber.

The engine’s spark plug angle and depth were adjusted to position the electrode deeper into the combustion chamber where it is closer to the center of combustion, also contributing to optimal combustion. 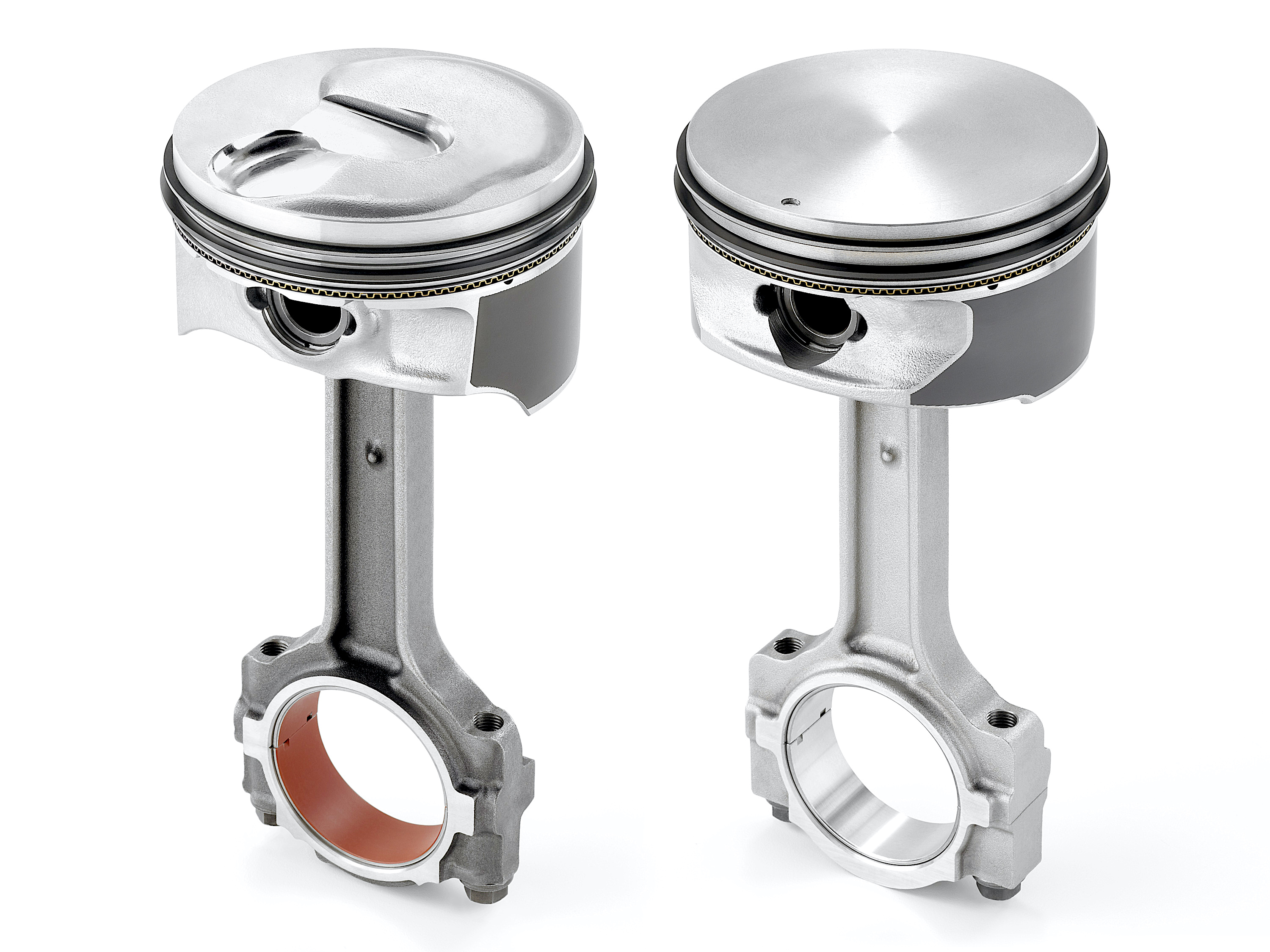 The computer-refined topography of the LT1's piston top (left) is obvious compared to the conventional flat topped piston of that engine's LS predecessor (right).

The LT1’s piston topography is the result of extensive analysis which produced designs that direct the fuel spray for more complete combustion. On the manufacturing side, those piston tops are machined to ensure absolute fidelity to the design specs so they produce the intended mixture motion and compression ratio.

The engine’s bottom end is redesigned for maximum rigidity and improved lubrication. The built-in piston-cooling oil spray system has a variable-displacement pump to run at efficient low pressure at lower speeds and the necessary higher pressure at higher revs.

Those main bearing caps are made from nodular iron, which GM says provides a significant upgrade over the typical powdered metal bearing caps because they are stronger and better absorb vibration. 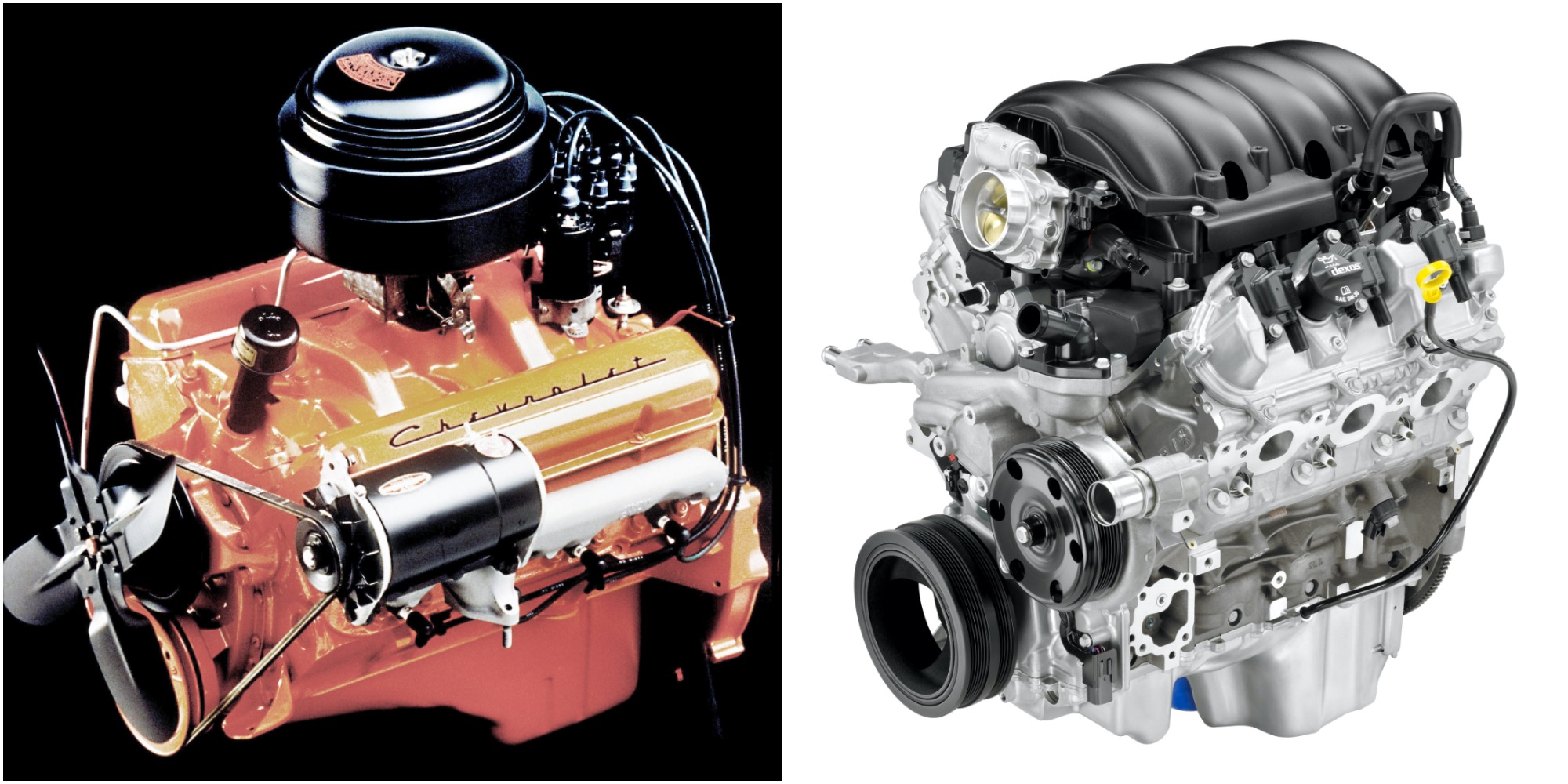 The original two-barrel carburetor-equipped 265-cubic-inch (4.3-liter) small-block Chevrolet V8 of 1955 produced 162 gross horsepower and an abundance of pollution. The LT1 displaces 6.2 liters, so it isn’t a direct comparison, but GM does build a 4.3-liter six-cylinder version of the engine which produces 285 net horsepower with virtually no hydrocarbon emissions.

All of these details contribute to the advances that keep pushrod engines at the forefront of technology, ensuring their relevance through the sunset of internal combustion.