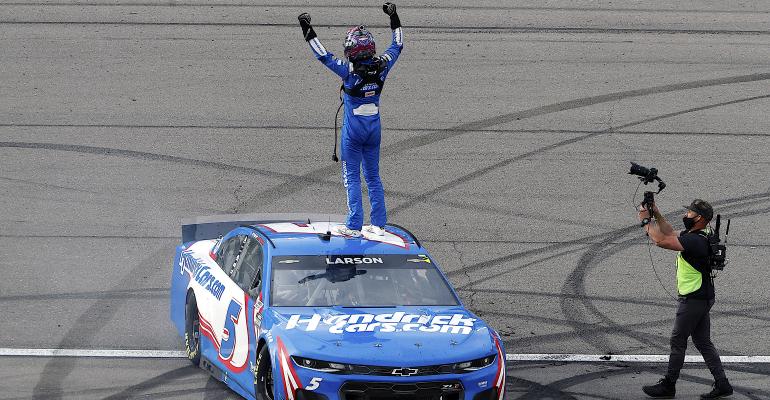 Simulation has become an increasingly accurate and valuable tool for racing teams in recent years, but the pandemic has made virtual testing even more helpful as teams have had less access to physical track testing opportunities.

Next year, NASCAR is moving from its current rules formula to an all-new car called the “Next-Gen” car, and preparations for fielding those cars will also rely heavily on simulation. 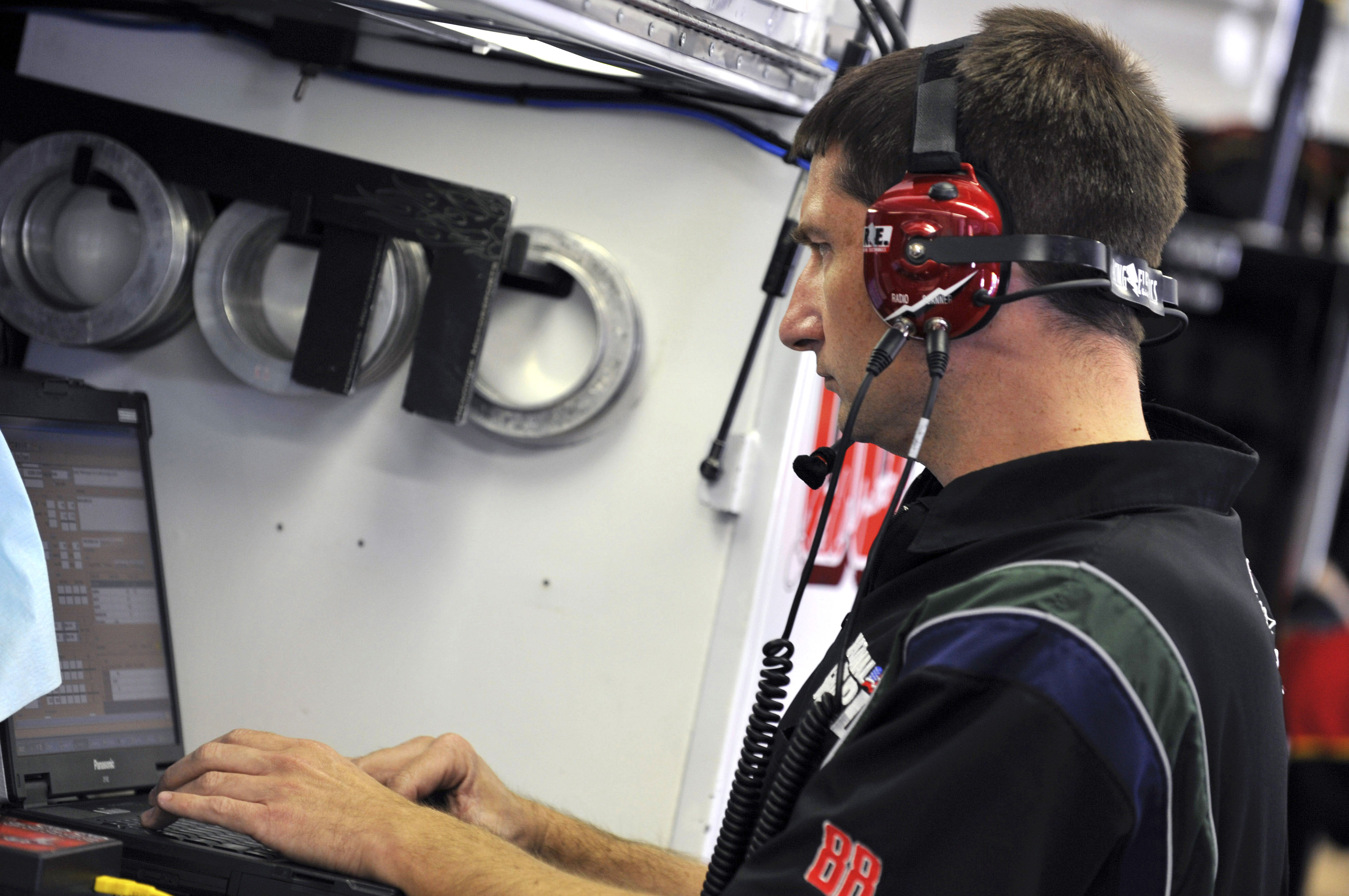 Engineer H.A. Mergen during an earlier phase of his career when he traveled to the race track with the team every weekend.

When NASCAR resumed racing following its pandemic-induced hiatus last summer, the series’ solution to maintaining social distance was to have teams race at tracks within a short driving distance of the sport’s Charlotte, N.C. hub.

Teams arrived at the Darlington Raceway track in South Carolina, rolled the cars off the transporters (“haulers” in NASCAR parlance), and effectively drove the cars straight onto the track for the race so that they could pack up and be home the same day. This focus on reducing potential Covid exposure meant that teams and drivers did not enjoy the usual benefit of practicing and qualifying before the race to get the cars’ settings dialed in to suit the track, conditions, and driver preferences.

With no real testing or practice, teams set their cars up using data gained from simulations of the track. “A year ago, we went to Darlington and raced without practice,” recalled H.A Mergen, simulation engineer for Hendrick Motorsports.

So many issues can arise from having the car’s multitude of adjustments set wrong that the cars can be utterly uncompetitive or potentially unsafe. Having the correct ride height, damper setting, and weight jacker adjustments are crucial to the cars responding as expected when the green flag waves and the field charges down the front straight toward the banking. “They all went down to turn one and they didn’t have problems,” said Mergen. “The splitters didn’t hit the racetrack,” from the ride height being set too low or the dampers set too soft, he added. “All the teams got their setups close enough they could race them.”

The grandstands were empty that day, but fans watching at home on television probably didn’t appreciate just how little of the usual preparation had occurred, and yet the racing went as usual. Without simulations, a few teams with deep records of previous visits to Darlington and with drivers who have many laps at the track might have been competitive.

But other teams, with less experience at their disposal, would have struggled mightily. Most would likely have ended up with the “Darlington stripe” down the right side of their car as a result of side-swiping the wall exiting the track’s tight corners.

Teams like Hendrick do two different kinds of simulations. One is the virtual models that they build of their cars to produce aerodynamic maps, vehicle compliance information, and estimate tire performance.

The other kind of testing, called “Driver-in-the-Loop” (DIL) testing, puts a driver into a physical mockup of the race car to test the various setup changes in person on a virtual track.

For the first type of simulation work, Hendrick employs “a pretty large group” to program the software, which is used by about 75 “customers” within the team. Hendrick uses Dassault Systemes’ Dynamic Modeling Laboratory (Dymola) to build its simulations.

Accurately digitizing the car’s many parts is time-consuming. “This has taken years to do,” Mergen noted. “You have to capture all the physical settings on the car, the suspension geometry, control arms, spindles, all those are replicated.”

With the change to the Next-Gen car, Hendrick’s vehicle model will be obsolete, so the team is building a new one for next year’s car. “[Simulation] is going to be very valuable,” asserted Mergen. “The teams that do the best with their sim; you’ll see them a head and shoulders above the rest next year. For us, it is starting over.” 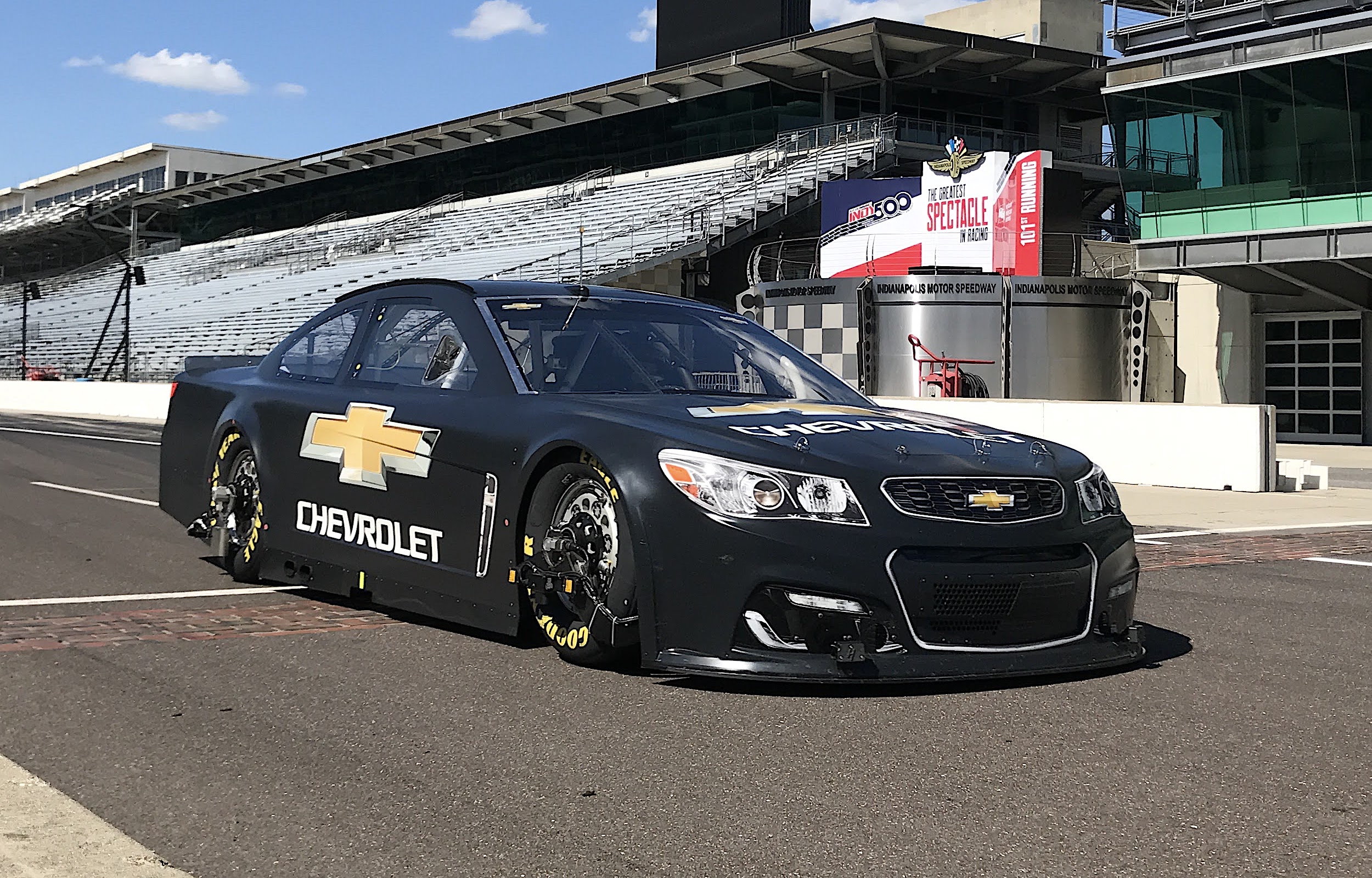 Teams gather data to validate models by testing instrumented race cars. One of the main tools of data acquisition is the use of wheel force transducers. “You can see when you look at the wheels that these are not the traditional wheels that you see us race every week,” Mergen pointed out. “Those wheels have six load cells in them and we’re actually capturing all the forces and moments that are generated down at the [tire’s] contact patch and get transmitted back into the car.”

A total of 24 wheel force sensors provide a mountain of data, and that is supported by other sensors on the car. “We’ve also got slip sensors on each corner of the car, which allow us to measure how the car is sliding across the track and we use all that data to figure out what the tires are doing on the track. We then take that data and we use it in our simulations.”

For DIL simulation, NASCAR teams rely on vehicle simulators operated by the car manufacturers. Hendrick is aligned with General Motors and uses that company’s vehicle simulator that is located in Huntersville, N.C. “It is shared by all the GM teams,” said Mergen. “That’s actually split up between NASCAR, IndyCar, and the Corvette sports car team.” 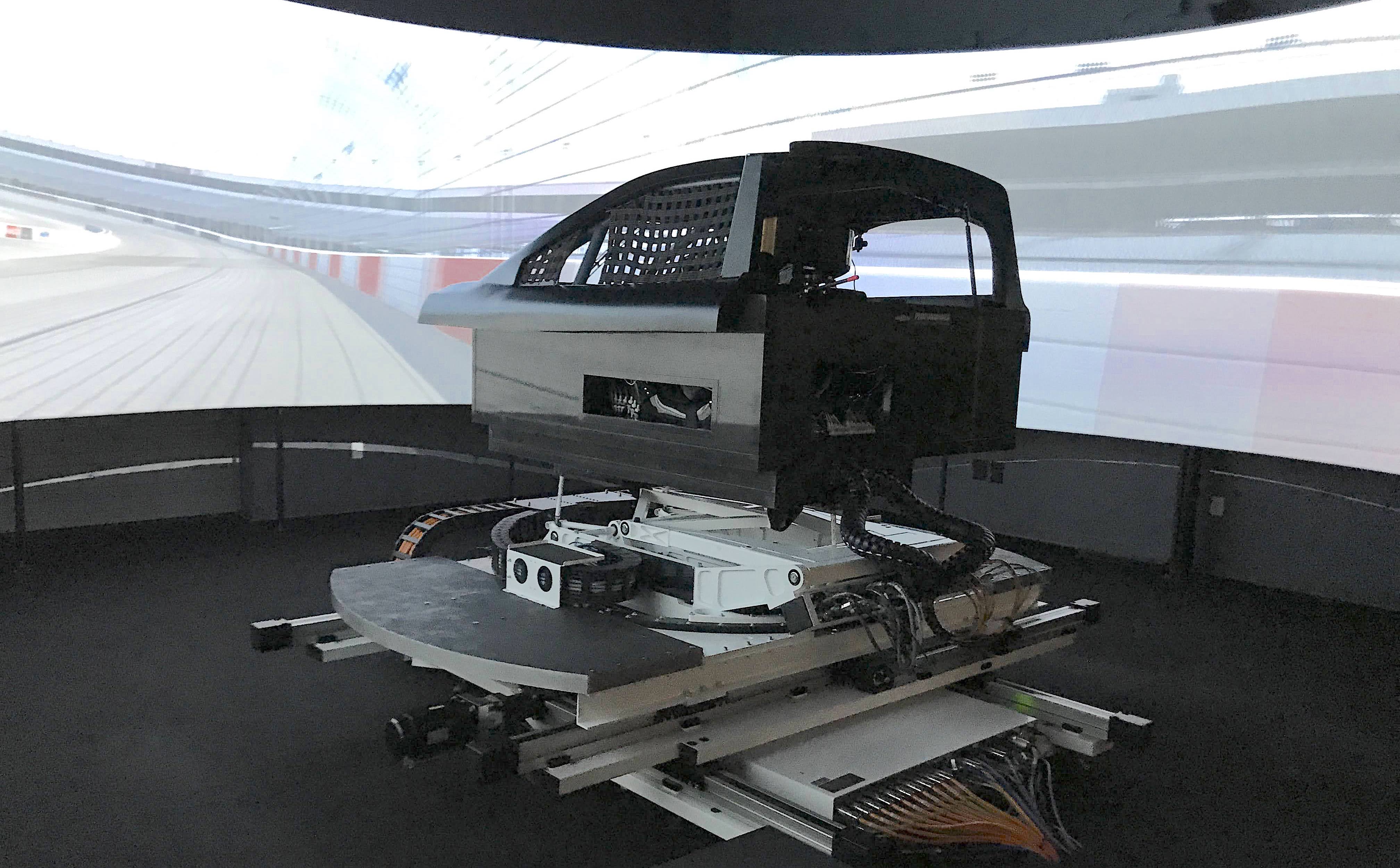 The General Motors driver-in-the-loop vehicle simulator incorporates the entire cabin of a race car on a moveable platform.

“[Looking at the photos], you can see there’s a full cockpit that the driver sits in and the screen wraps all the way around him, so he’s fully immersed.” After years of writing code for the in-house simulation work, Mergen now leads Hendrick’s use of the GM DIL simulator. “Your final tool to get you to the race track is the simulation,” he stated. “It is very valuable for our guys to figure the running height of the car, the balance of the car, and the camber so you don’t put too much wear in the tires.”

“We go to that simulator and we put the driver in it. He says ‘Good’ or ‘Not good, make changes.’ I think it has been very valuable.”

In addition to being valuable, the DIL simulator looks like the world’s greatest version of the Daytona USA arcade racing game, so what fan wouldn’t love to give it a try? Mergen has.

“I’ve actually been fortunate enough to get to drive the simulator,” he admitted. “I will tell you it is not easy and these guys get paid a lot because this stuff’s hard and they’re actually really good at what they do.”