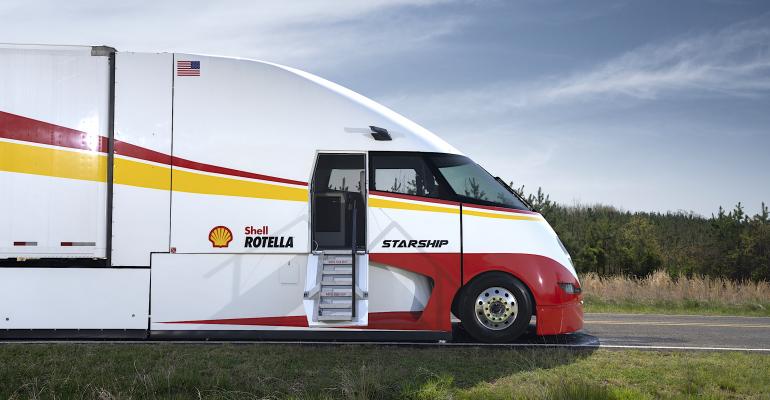 The Starship 2.0's Zeus stairs deploy from the side of the cab like those on an airliner.
Shell proved the Starship’s efficiency on a coast-to-coast drive from San Diego to Jacksonville carrying material for creating artificial reefs in the ocean, delivering hope for the future.

Following up on its 2018 Starship project that sought to develop a fuel-efficient Class 8 commercial truck, Shell Lubricant Solutions has taken that project to the next generation with Starship 2.0.

Over-the-road freight transportation like the familiar tractor-trailers on the Interstate accounts for 9 percent of global CO2 emissions, according to Ryan Manthiri project leader in Shell’s discovery innovation group.

Shell proved the Starship’s efficiency on a coast-to-coast drive from San Diego to Jacksonville carrying material for creating artificial reefs in the ocean. This is certainly in keeping with the truck’s green mission, but it would be more poetic if they’d carried a load of Coors in tribute to the mission of the classic Smokey and the Bandit movie.

But the object here was to sip fuel, not to chug beer, and Starship 1.0 boosted efficiency by an eye-opening 284 percent. But engineers on the project felt there were still gains to be had, so they launched an effort to top the original truck. Drivers are familiar with miles per gallon as a metric of fuel efficiency, and that can apply to heavy-duty trucks too.

Related: UPS Has Invested in Autonomous Trucks After Ongoing Tests 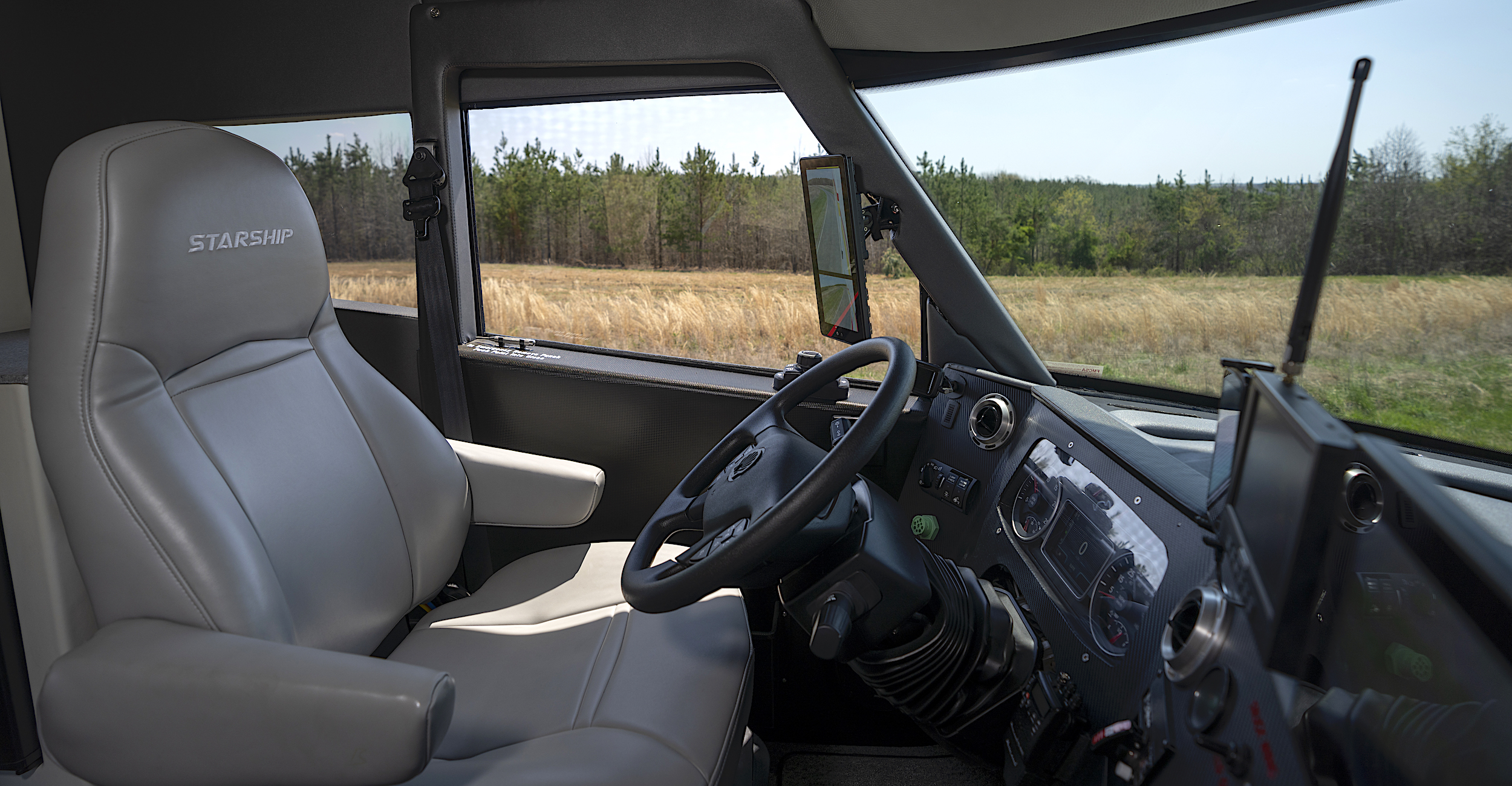 Starship's cab includes an array of video displays providing data to help the driver save fuel.

Fuel economy, in familiar miles per gallon, is 10.8 mpg versus today’s average of 6.4 mph.

Perhaps the most impressive aspect of this achievement is that it was accomplished with existing, available components and technologies, combined to demonstrate what is already possible for saving fuel in commercial trucks.

Starship’s aerodynamic advances are its most obvious trait, but the truck’s sculpted carbon fiber prototype cab could be made for mass production from aluminum, Manthiri points out. The cab, skirts, gap sealers, boat tail, and other aerodynamic aids slash the truck’s coefficient of drag from a bricklike 0.60 to an electric car-worthy 0.25.

The truck dispenses with the giant reflective glass mirrors normally needed to minimize a driver’s blind spots in one of these behemoths and replaces them with slippery Stoneridge MirrorEye video camera pods that display what is around the truck on screens in the cab. The truck includes Bendix Wingman blind spot working technology too. 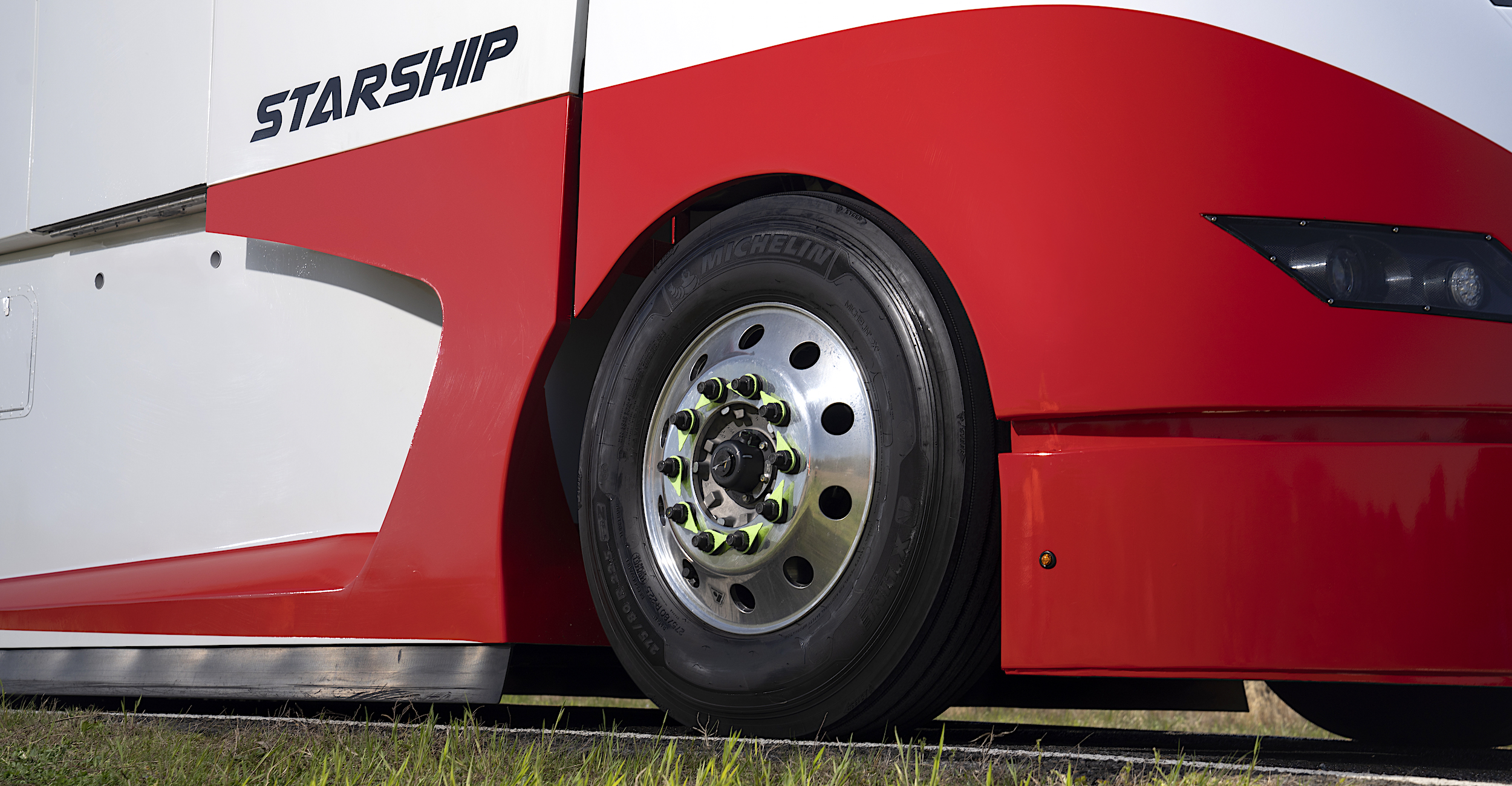 The smooth cab eliminates traditional doors. Instead, it has an airliner-style deployable ladder from a fold-down hatch. Shell calls this a Zeus door. It will certainly turn heads at the truck stop.

The whole thing rolls on Michelin’s X Line Energy tires, with H load range on the drive axles and L and K load range tires for other axles.

Saving weight is a common aim for fuel-saving projects, but the goal has a dual purpose for Starship. Less mass requires less fuel to move, but in the case of a truck, less vehicle base weight means more capacity for payload weight, which is limited by the tires’ capacity.

Cutting weight from the truck means adding weight to the cargo and providing a bigger multiplier on the truck’s freight ton efficiency score. That is why that score shows a bigger improvement than the raw miles-per-gallon fuel economy score for Starship 2.0.

The huge area atop Starship’s trailer carries a 5-kW solar array, which is used to reduce parasitic losses on the engine from the alternator, as well as to provide hotel power for the cab when the engine is off. That’s important because drivers can spend more time parked when they aren’t Bandits fleeing angry Smokeys.