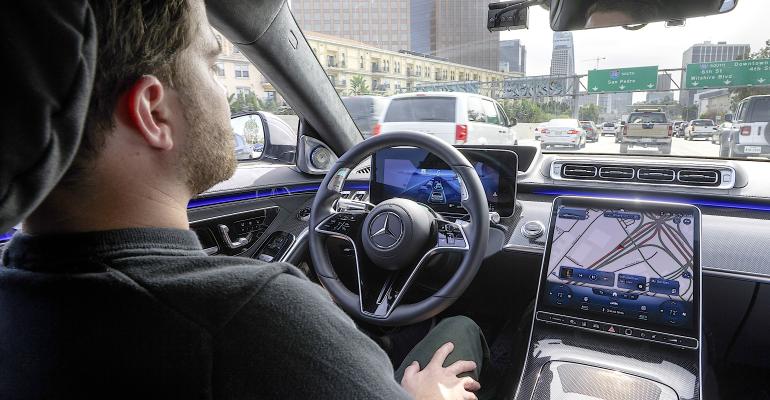 Drive Pilot is able to take control of the car's operation at speeds below 40 mph, such as in this traffic jam.
The jump to a driver-assistance system that does not require driver supervision is a big one.

In late 2021, Mercedes-Benz received approval from the German Federal Motor Transport Authority to release its Drive Pilot SAE Level 3 driver assistance system for public use. This is an Economic Commission for Europe certification that permits the system’s use in Europe as well as in Australia and Japan. Mercedes predicts U.S. government approval later this year.

Mercedes’ current system, along with others like General Motors’ Super Cruise and Ford’s Blue Cruise is SAE Level 2 Driver Assistance systems. Although these systems can operate a car’s steering, throttle, and brakes with the driver’s hands off the steering wheel, they still require the driver’s supervision at all times. These systems have cockpit cameras that let them watch the driver to ensure that their eyes are on the road.

The new Level 3 Drive Pilot is the first that does not require the driver to watch the car’s operation when the system is in use. This should not be confused with Tesla’s Autopilot system or its so-called “beta test” of its Full Self Driving product. Those are both SAE Level 2 systems, but without cameras to safeguard that the driver is actually watching the car’s actions. Tesla also operates these systems with fewer sensors than any of the legacy car companies, leaving its cars with a less complete view of their surroundings.

“[Level 3] is really a breakthrough leading into the space of Level 4,” said Markus Schäfer, Member of the Board of Management of Daimler AG and Mercedes-Benz AG, Chief Technology Officer responsible for Development and Purchasing. And [Level 3] is the main wall you're hitting first. You have to break through in order to just advance to Level 4. You can do all kinds of things in level two. But the real interesting game starts when it comes to Levels 3 and 4. At first, you have to cross this bridge and crossing the bridge, that's most the major milestone we had in mind to accomplish.”

Related: AI Driving Systems Will Get Smarter Via AI Updates

Mercedes will be cautious in deploying this Level 3 system, which will be available on the company’s S-Class flagship sedan and EQS electric full-size sedan, so there is a restriction to meticulously mapped limited-access highways and to a maximum speed of 40 mph. This means that for all practical purposes, at launch, Drive Pilot will be useful only in traffic jams.

Higher-speed highway cruising will come later, as experience with the system grows and both Mercedes and regulators gain confidence. The challenge of operating at high speeds is the combined effect of increasing the volume of incoming data and shortening the amount of time the computer has to analyze that data, Schäfer said.

“You have to be convinced about the safety and the degree of safety of your vehicle and that's a result of a couple of million miles of testing,” he explained. “And of course, endless simulation, computer simulation.”

But faster speeds will come with time, he said. “Our goal is to take it above 60 kilometers per hour,” said Schäfer. “But once you have to 60, it's pure mathematics and sensor technology to increase speed. So I'm pretty much convinced that we are able to take to speed up at the end of the future. Let's start with this. And we'll take it we'll take it from there.”

Cars equipped with the Level 3 Drive Pilot system are outfitted with forward-looking lidar, radar, and cameras, plus a rear-facing camera and a microphone whose primary job is to detect emergency vehicles approaching from behind. When the cars land in California, the rear camera and microphone will also be on the lookout for lane-splitting motorcycles which commonly stream past traffic-bound cars by riding between the lanes.

“We had to install cameras looking backward and identifying who’s coming from the back; dealing for example a biker coming at higher speed from the rear, dealing with an emergency car, cars cutting in, dealing with trailers,” said Schäfer. “We needed to install a microphone in the car to identify the signals of an emergency vehicle.”

Weather also introduces restrictions on Drive Pilot’s Level 3 operation, as slippery conditions make it unsuitable for use at this time. Mercedes has another sensor for that, a piezo-electric sensor in the front wheel wells that detects water striking a membrane on its surface to determine that there is too much water on the road. 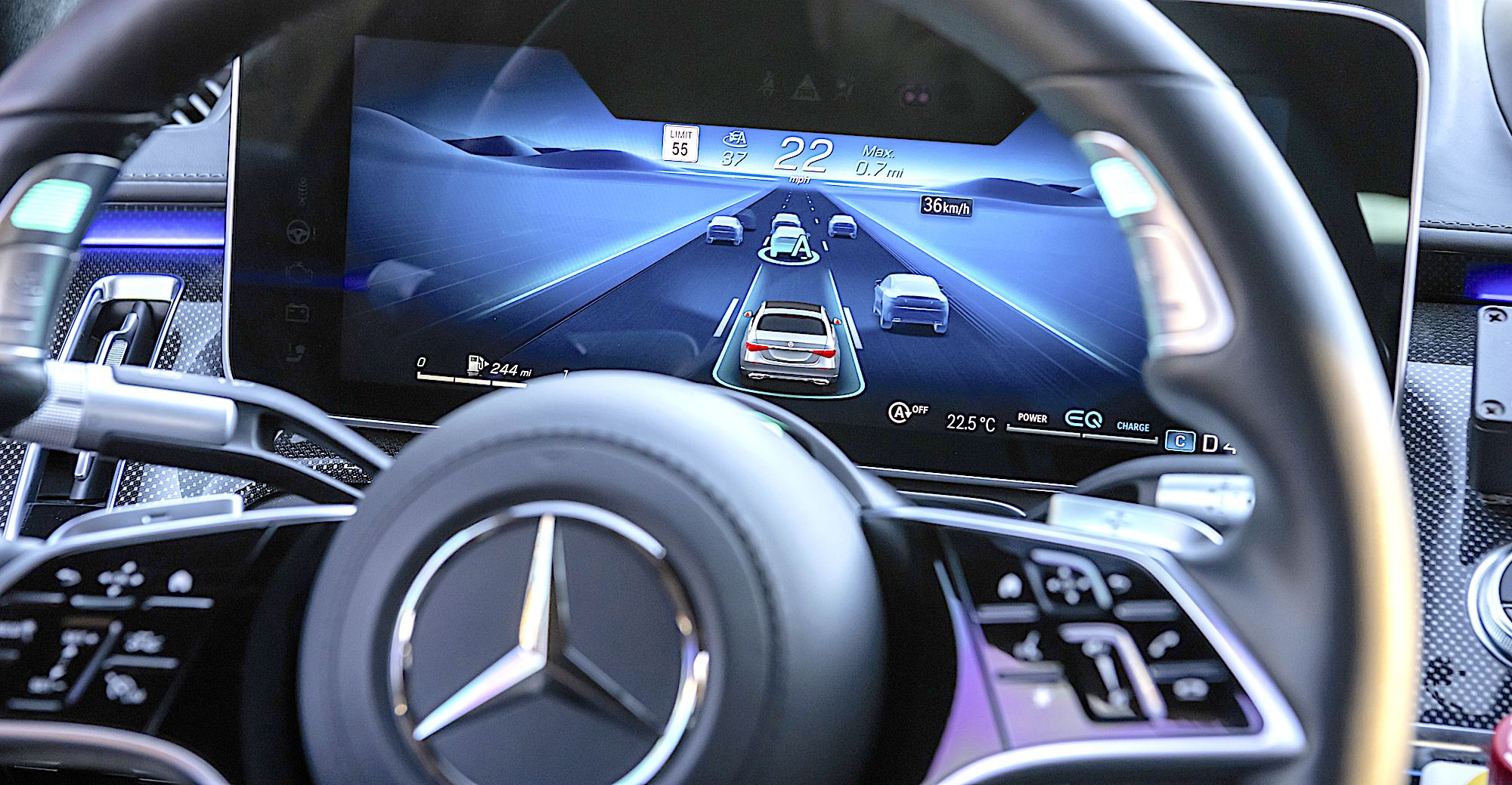 The Mercedes instrument panel provides the driver a view of the computer's understanding of objects surrounding it as seen through its various sensors.

Mercedes describes operating within these restrictions as “conditionally automated driving.” So when driving on a mapped highway, with traffic speeds below 40 mph, and good weather, Mercedes’ demonstration driver showed me how the system works. The system can also work in its Level 2 configuration with fewer restrictions that require the driver’s attention, but when the display indicates that conditions are acceptable, the driver can activate Drive Pilot Level 3.

This is confirmed by turquoise-colored lighting across the top of the steering column and a pair of lights on the steering wheel at the 10:00 and 2:00 positions. Underway in this mode, the driver is free to check messages or look at websites on the car’s central display screen. Of course, it will surely take drivers a while to be comfortable with the system.

One thing that will help is the instrument panel display depicting the computer’s view of the car’s surroundings. Using that to confirm that the car does, in fact, see things around it, even things that the driver suspects or fears it hasn’t spotted, builds confidence in the system over time.

Drive Pilot negotiates traffic smoothly, preserving a largish gap to the vehicle ahead, and not panicking when that gap invites cars from adjoining lanes to cut in. When a car does cut in ahead, Drive Pilot responds smoothly, easing back to create a safe gap to the new car ahead. 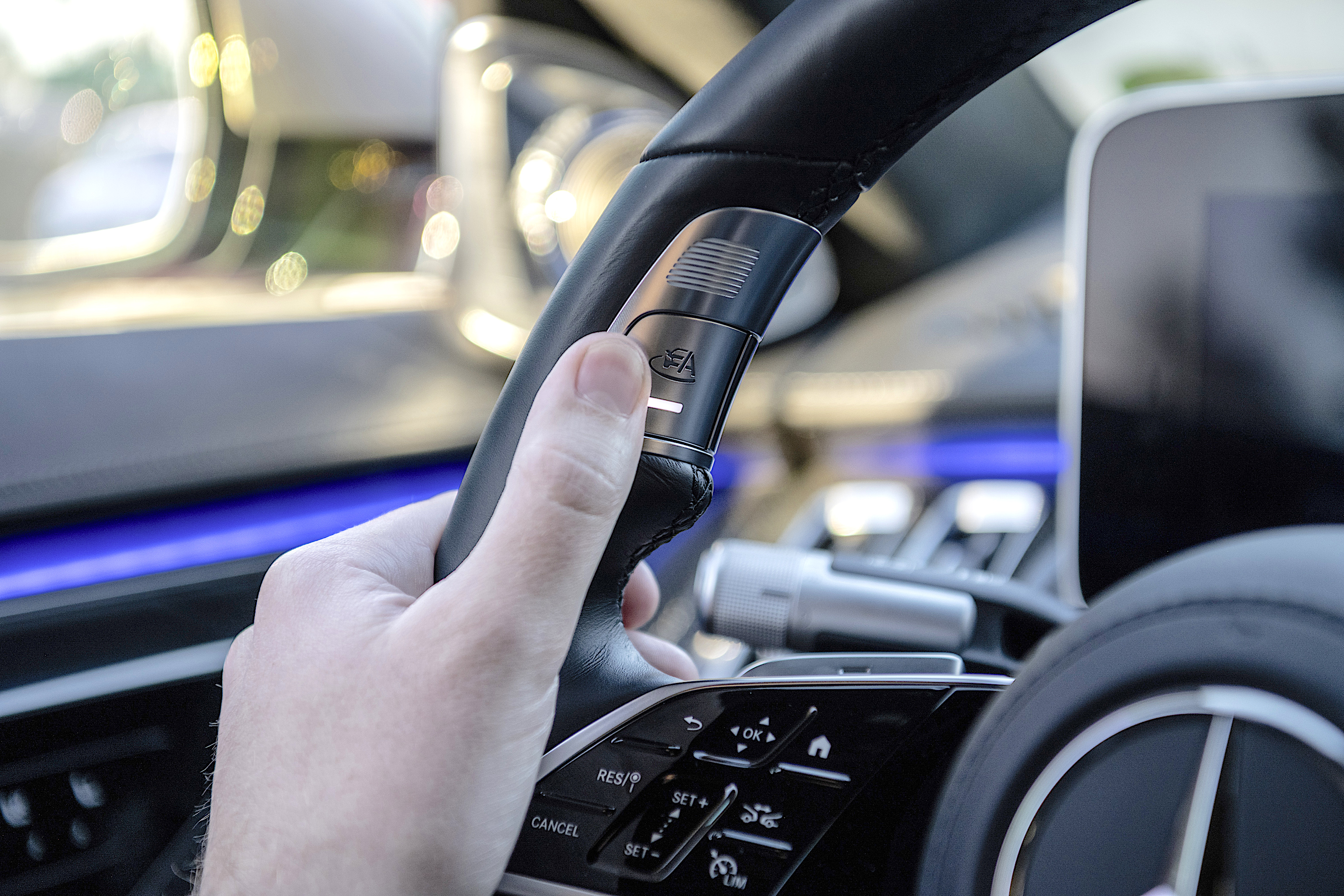 When a car in a lane to the left suddenly realizes they need to exit and swoops through the gap ahead on their way to the exit lane to the right, Drive Pilot is smart enough to hold its speed and let the lane-changer pass through without response. The computer recognizes that vehicle’s lateral velocity and understands that the car will not stay in the path ahead for long.

Similarly, the system can see cars to the right in an on-ramp, and realize from its map that the ramp is ending and that the car will need space to merge, so it leaves room to let cars enter the highway.

It would be useful for automated drive systems to be able to identify other vehicles’ turn signals as an occasionally reliable source of information about that driver’s intentions. But my demonstration driver/engineer explained that spotting turn signals among the glare and reflections of traffic is a tough task, and then sorting true positive identifications from false positives in the split-second when such recognition is necessary is not a capability of this system or any system that we will see soon, he said.

Regardless of this opportunity for improvement, the Drive Pilot Level 3 system demonstrated competence beyond that shown by other systems so far, which is an encouraging step forward.