Pirelli Accelerates Formula 1 Tire Technology Out of the '60s 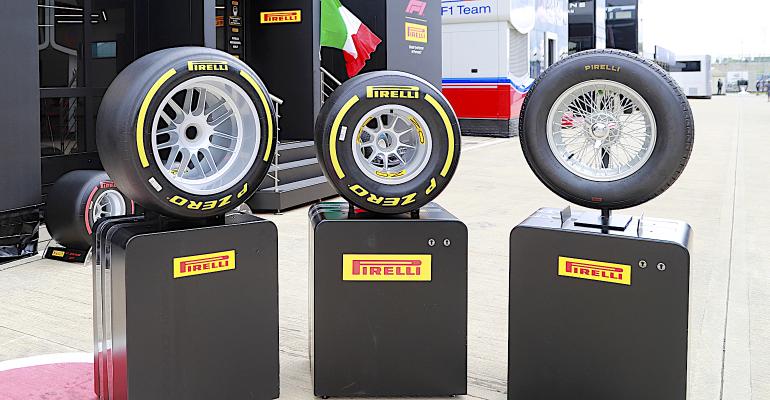 Start Slideshow ›
Pirelli proudly points out that it has supplied Formula 1 tires in the new 18-inch format for 2022 (left), the outgoing 13-inch configuration used since the 1960s (center), and the original tires used when the series started in the1950s (right).
New Formula 1 rules for 2022 call for a switch from the 13-inch wheel size used on the race cars since the 1960s.

Formula 1 is making wholesale changes to its cars for the 2022 season in a bid to equalize the performance levels among teams and to contain costs. This revamp includes an update to the wheels and tires the cars use, with the retirement of the familiar 13-inch wheels and fat sidewall high-profile tires that have been used since the 1960s, in favor of more modern-looking low-profile tires on 18-inch wheels.

This change is meant to foster technology transfer between the race tires and high-performance street tires for F1’s sole tire supplier since 2011, Pirelli. The company’s contract runs through 2024, so it will provide the new-style tires for a minimum of three seasons.

The 2021-spec tires have the look of older technology, with their meaty rubber sidewalls. They aren’t actually old technology, but the know-how that goes into them isn’t as directly relevant as the 2022 low-profile tires will be. These new race tires will also look more like the low-profile tires mounted on contemporary sports cars, so the change provide Pirelli with both technical and marketing benefits from the new tires.

Formula 1 teams and fans will also benefit, because the new tires are expected to improve drivers’ ability to race. A criticism of the current situation is that too often drivers are limited by their need to “manage” their tires, or preserve their grip by driving gently rather than wearing them out prematurely with a hard charge.

Tire preservation isn’t what fans like to see, and teams whose cars incur less tire wear have an advantage during the laps preceding a pit stop for new tires. Making the new tires was a much more involved engineering project than simply developing a version of the existing tires that could be stretched onto the larger-diameter wheels, reports Mario Isola, head of Pirelli’s Formula 1 racing program.

“For us it is obviously much better because technology transfer from 18-inch tire to the road tire is much closer. We also had to redesign completely the range of compounds. At the beginning we had two choices. One was to take the current compounds and try to upgrade them with the characteristics required for an 18-inch tire. The second one was to start a completely new development, different ingredients and new technology and try to make a real big step compared to this year.”

“We decided for this second direction. It is more risky but at the end it is a better decision because result of the test is positive and the feedback coming from the drivers is very positive.

We had to optimize the profile, to optimize the construction in order to have the footprint that is working properly, distributing pressure and temperature as we want. That was the technical challenge.” 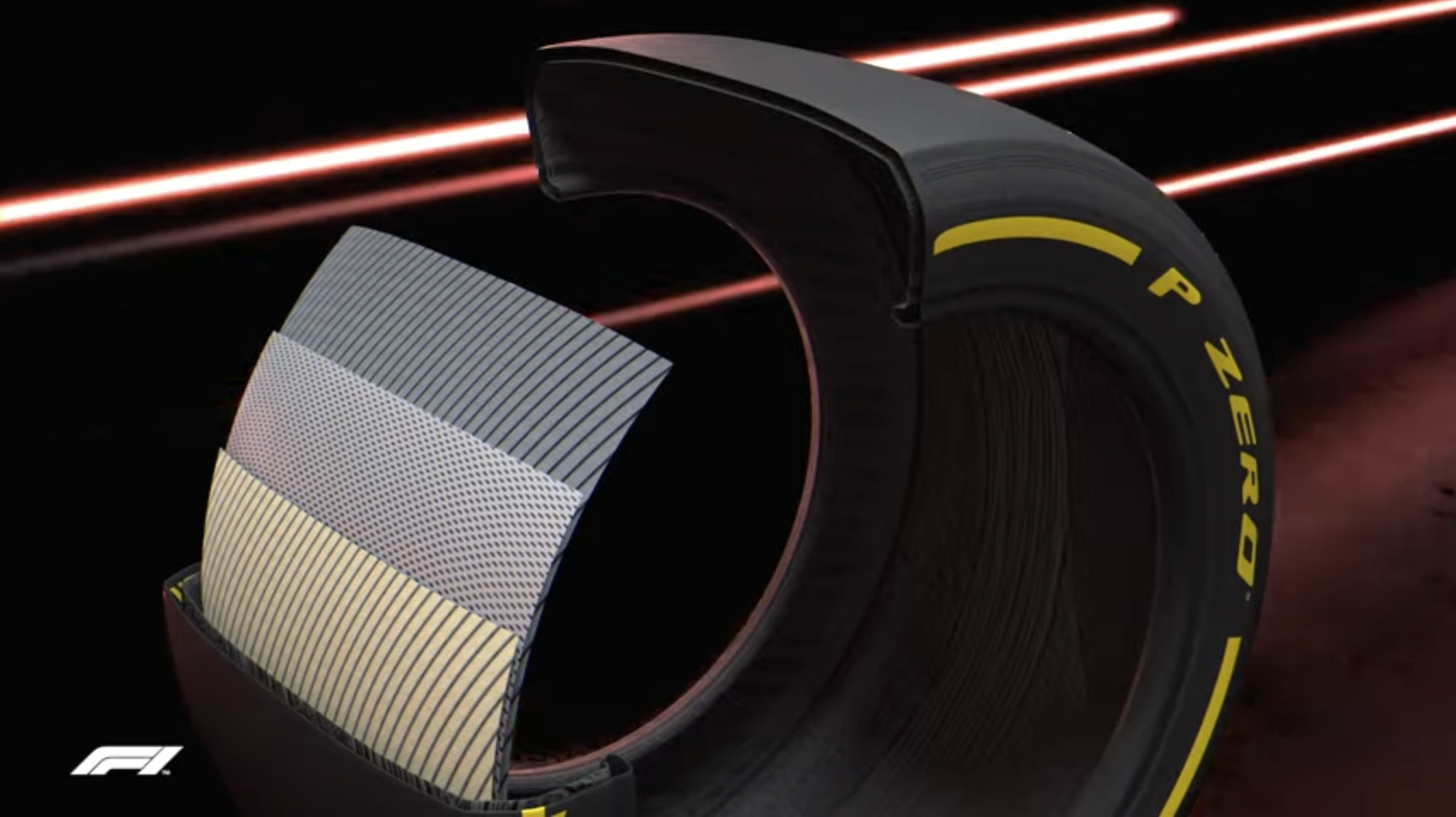 Pirelli is previewing hints of the construction of its next-generation 18-inch Formula 1 tires with this drawing.

Pirelli is previewing hints of the construction of its next-generation 18-inch Formula 1 tires with this drawing.

It is difficult to design tires for cars that don’t yet exist, as teams haven’t yet built their 2022-spec cars. Pirelli is doing its best to get as close as possible through a combination of computer modeling and physical testing using current cars.

“This is something similar to what we did in 2016 when Formula 1 decided to change the width of the tire,” Isola recalled. “We work in parallel with the teams with the simulation and the tire models. That was really important because in 2016 we had new cars with which to test our tires, but they were much slower so it was not really a representative situation on track. Thanks to simulation, we had an idea what to expect the following year.”

Digital modeling gets the tire into the ballpark before drivers test real tires, according to Isola. “The same process was quite useful for us to predict the performance for the following year and it is exactly the same that we did this year, together with the teams.  The teams have a 2022 car model. We have a “black box” with a virtual tire model that we supply to the teams.”

“They can fit the virtual tires on the virtual car and they can use it in their simulator and come back to us with proper feedback. Doing this loop for two or three times, we converge to a better idea of what to expect from next year. This, together with track testing is giving us a picture of what is going to happen next year.”

Pirelli uses in-house custom-developed software to create its tire models, according to Isola. “They started from commercial software, but the model is now a specific one that was developed by Pirelli,” he said.

The company conducted 28 days of track testing for the new 18-inch tires throughout 2021, bringing the total to 36 days of physical testing for the tires. The engineering effort includes more than 10,000 hours of indoor testing, more than 5,000 hours of simulation, and more than 70 virtual prototypes developed virtually. From this, Pirelli built 30 physical tires of different specifications for track testing by the drivers. They drove more than 12,000 miles on the tires, using 392 sets of the prototype rubber.

Early indications are that the new tires should be better for racing, without the requirement for drivers to manage tire degradation throughout the run on a set of tires. “The target is exactly this: to give the drivers the possibility to push for all of the run,” Isola said. “What we did with our outdoor testing was to use race drivers that are currently in the championship. We asked them to push for all the laps and that was very useful to understand if they were happy with the new approach.”

“The target for Formula 1 is not to increase the number of overtakes but to increase what they call close racing. It is important that we have overtaking on the track obviously. What is important is that overtaking is not too easy. We want to see action on the track and close racing by cars that are following each other, and drivers trying to overtake, but not to make it too easy because otherwise it is not what spectators want.”

A non-obvious result of having larger wheels while the brakes remain unchanged is that the distance from the carbon ceramic brake rotors to the wheels’ inner rim will increase, reducing heat transfer from the brakes to the wheels. F1 regulators are also controlling airflow with wheel covers and specified brake duct design, with the aim of eliminating the current practice of controlling tire temperature and air pressure through heat from the brakes.

“In the new technical regulation brakes will be different and also the cooling system will be different,” Isola noted. “[Currently] the brakes are very close to the rims. Next year, between the brake and the rim, the space is much bigger and also the cooling system is different. It is designed to flow the hot air, so basically, they cannot use the brakes to define the pressure in the tire.”

Employing the brakes to heat the tires caused a surprising development during a race this season, when world champion Lewis Hamilton unexpectedly locked the brakes on his Mercedes-AMG Petronas F1 car entering the first corner on a race restart after a full-course yellow flag period during which time the cars followed a safety car at reduced speed.

During the Azerbaijan Grand Prix, Hamilton inadvertently jostled the “Brake Magic” button on his car’s steering wheel (see our description of the complex controls on the steering wheel here). This button’s purpose is to change the brake bias setting to heavily rear-biased. The goal is to heat the rear brakes, and correspondingly the rear tires, while the car is traveling slowly behind the safety car. When the race restarts, the rear tires are hotter and grippier as a result, providing better acceleration and cornering grip. 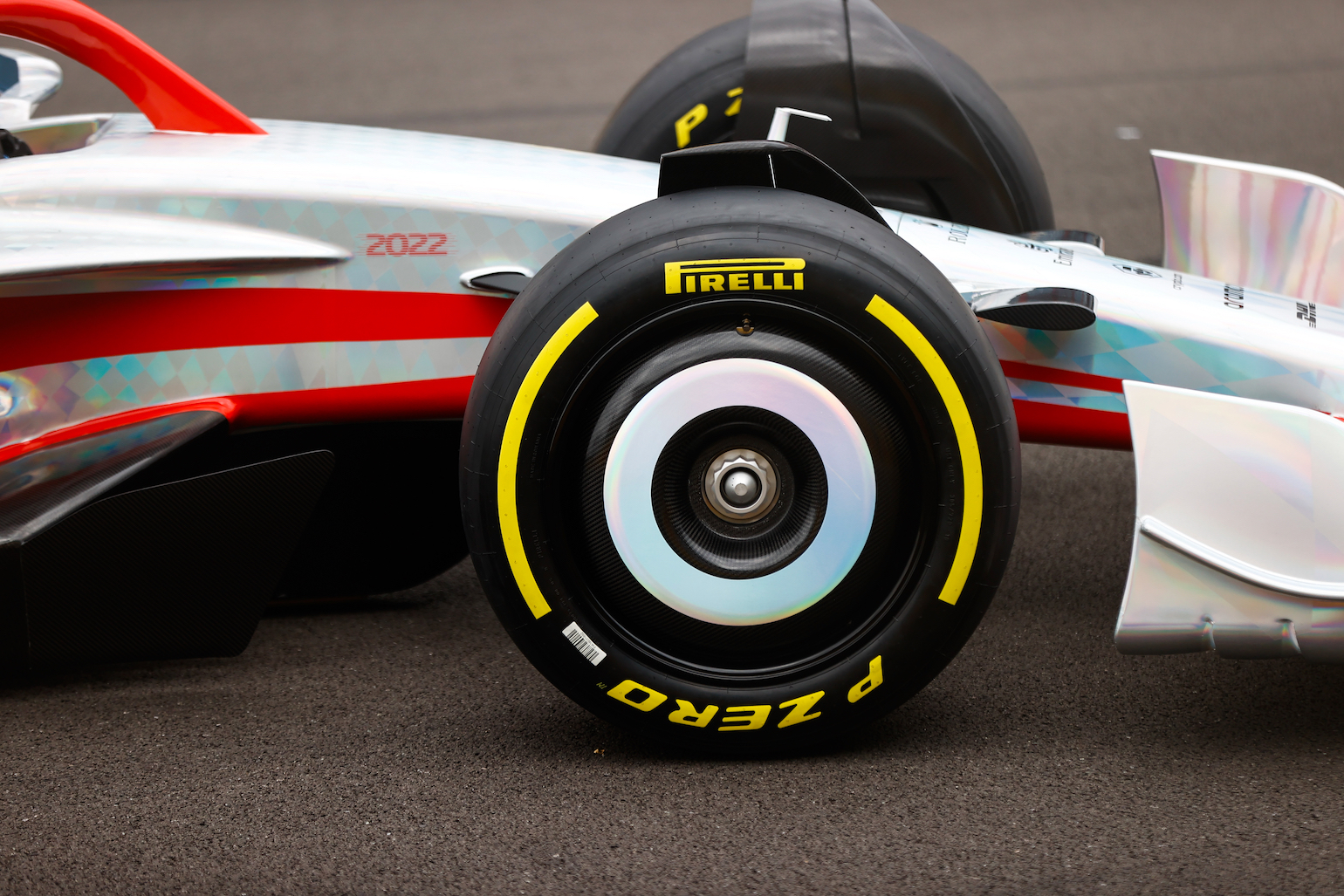 The new covers on the 18-inch wheels will control teams' ability to manage tire temperature through the brake heat.

The new covers on the 18-inch wheels will control teams' ability to manage tire temperature through the brake heat.

Having accidently switched his car’s brakes to this mode, Hamilton charged into the first turn on the restart and instantly locked his brakes and sliding straight off the track. With the ability to heat tires limited in 2022, there may not even be a Brake Magic setting that could potentially cause such complications.

We won’t really know until drivers point their 2022 onto the track at Formula 1’s pre-season testing next year. That is also when Pirelli will get its first report card on the new tires, and also, on its engineering methodology used to produce them.