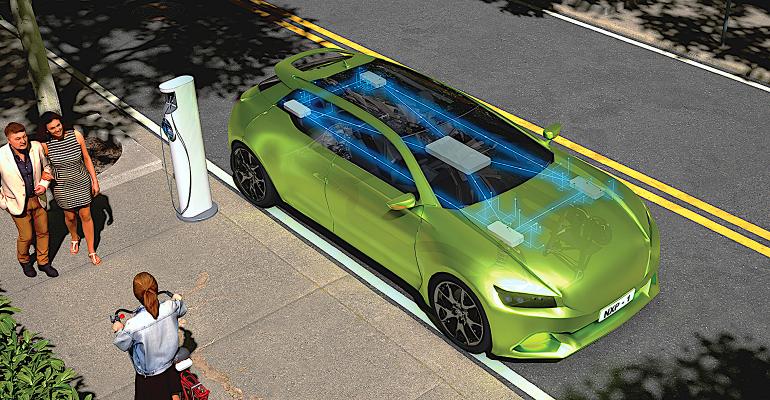 The S32Z is ideal for safety processing and domain and zonal control, while the S32E is for electric vehicle control and smart actuation. These join the other members of NXP’s S32 family, the S23G, which handles vehicle networking, S32K, which handles body and comfort features, and S32R, which runs a car’s advanced driving and safety (ADAS) and automated driving assistance functions.

“We’ve been building various processors that are very good at doing things throughout the car,” noted Brian Carlson, director of global products and solutions at NXP. The chores that the S32Z and S32E now address are tasks that have previously been done by microcontrollers, he explained. Using full-fledged processors for these functions now because their various processing cores run in isolation from one another so that a problem with the system running on one core does not spill over to affect the operation of another system.

The move to processors permits these systems to be software-defined, so they can be upgraded with new and better features over time through updates. “Instead of swapping out boxes to add functionality you download software,” Carlson said. “It maintains the critical deterministic behavior of older technology while taking it to the next level of performance.”

Because these processors run increasingly large software programs, it is important that these new NXP chips support external DRAM and flash memory, Carlson added. The chips are fabricated with a modern 16-nanometer lithography process, which compares to competitors’ 28 nm chips, he said. Additionally, NXP is preparing for a move to even more advanced fabrication technology that will drive still-better performance. “We are showing 5-nm test chips, so we have a strong road map,” he said. 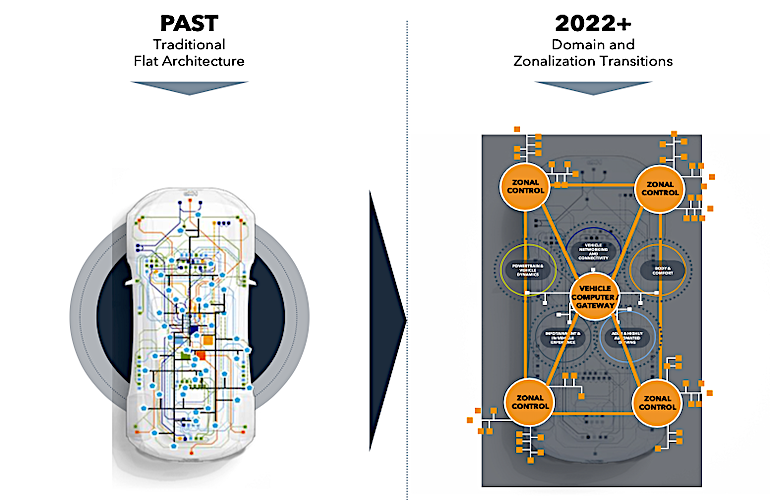 The aim of consolidating numerous microcontrollers and processors onto a smaller number of processors that can each run multiple isolated systems simultaneously is the ability to simplify today’s incredibly complex wiring of many systems down to just a handful of systems that handle many functions.

“There is so much wire in cars, we’re talking 70 to 80 kilograms of copper,” said Carlson. “The wiring harness is the third-heaviest part of a vehicle. Going to a distributed architecture allows the cable harnesses to be minimized.”

“The S32Z and S32E processors offer a performance increase of a factor of 2 compared to embedded NVM MCUs, key integration platform features, and scalable memory with LPDDR4 DRAM and flash,” noted Axel Aue, VP of Engineering at Bosch, which will employ the NXP processors in its products. “It’s also ideal for embedded integration and allows the consolidation and isolation of vehicle functions with very high performance that previously required multiple MCUs.”

NXP says that the S32Z and S32E processors incorporate eight Arm Cortex-R52 processor cores with split-lock support that operate at up to 1 GHz. The processors isolate independent real-time applications with “core-to-pin” hardware virtualization and resource firewalls for freedom of interference. They are available with up to 64 MB of integrated flash memory for large, zero-downtime over-the-air (OTA) updates and support LPDDR4 DRAM and flash expansion memory with execute-in-place (XiP) mode for large applications and AUTOSAR Adaptive applications.  A communications accelerator (FlexLLCE) supporting 24 CAN interfaces, along with a Gigabit Ethernet switch supporting Time-Sensitive Networking (TSN), provides vehicle data seamlessly to “virtual ECUs” to improve efficiency and streamline software development. A hardware security engine (HSE) supports secure boot, accelerated security services, and key management. The S32Z and S32E processors are certified to ISO/SAE 21434 for cybersecurity and ISO 26262 for ASIL D functional safety.

NXP is providing samples of both chips to lead customers now.