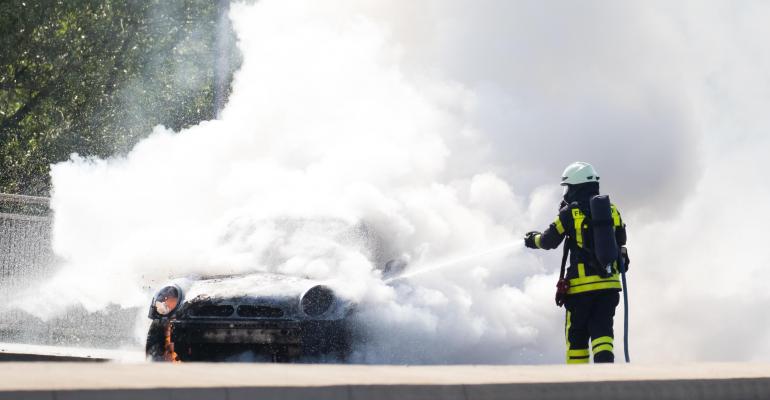 While firefighters are well acquainted with the techniques needed to extinguish fires in gasoline-powered vehicles, the high-voltage battery packs in electric vehicles pose challenges that are unique to each specific model.

That’s because of differences in battery location, chemistry, and discharging procedures. Because of the need for this specific information, the National Transportation Safety Board has requested better information from carmakers to aid firefighters dealing with such fires.

“A fire involving a high-voltage lithium-ion battery in an electric car can be challenging,” noted NTSB Chair Jennifer Homendy. “These fires illustrate what we all know; that severe crashes or component failures create safety risks in any car, gas, electric, or hybrid.”

The board identified a couple of crucial points in its analysis of EV fires, she said. “First, while the emergency response guides from electric car manufacturers are adequate in some respects, they are lacking in others,” Homedy explained. “For example, they contain almost no information about how to handle stranded energy.”

Related: The Impact of Automatic Emergency Braking on Cars and Crashes

Thermal runaway requires that firefighters douse the battery with cooling water, spraying directly on the underside of battery packs that are typically located on the bottom of cars. The Hydra 2 spray fixture is an example of emerging products designed to address the need to spray water upward from beneath cars whose batteries are in thermal runaway.

The Hydra 2 arm option under a vehicle. The Hydra has numerous options depending on the incident and environment. The safest and most effective way for #firefighters to cool an EV battery fire. #EVfires pic.twitter.com/TPoxv3G2bI

Stranded energy is the remaining electric charge in a battery after an incident. EVs are designed so that they discharge their batteries in case of a crash or fire, but experience is showing this doesn’t always happen, according to the NTSB. This leaves firefighters to deal with still-charged batteries while trying to extinguish fires.

“First responders deserve to have the information they need to stay safe when providing post-crash care—and that includes knowing how to suppress a high-voltage lithium-ion battery fire,” said Homendy.

General Motors spokesperson Stu Fowle says that while the company is currently listed among those that have not completed the NTSB’s request, it is just a matter of working through the process. Additionally, the company plans in-person safety training for emergency responders that will go beyond the guidelines, he said.

Volkswagen says that it had a head start on completing the process because of work Volkswagen AG had already done for German requirements. “We worked collectively with our colleagues in Germany to put together a very comprehensive Emergency Response Guide which included a considerable amount of information about our high voltage vehicles, including both BEV and PHEVs, while also providing specific Rescue Sheets including the applicable details for each of our vehicles,” said Thomas Zorn, Vice President, Vehicle Safety Office, Volkswagen Group of America.

“In formulating our response, it was helpful that the VW Group, as part of VDA in Europe, has worked in the development of ISO 17840, German Fire Protection Association “Technical-Medical Rescue after Traffic Accidents” guidelines, and has also contributed in regulatory changes,” he added.

The question of addressing stranded energy in batteries is one that will take additional work, according to Zorn. “We have advised that while we have added steps to ensure a safe initial response and vehicle transport, this information is also under investigation with industry experts whose objective is to develop a systematic approach to minimize these risks.”