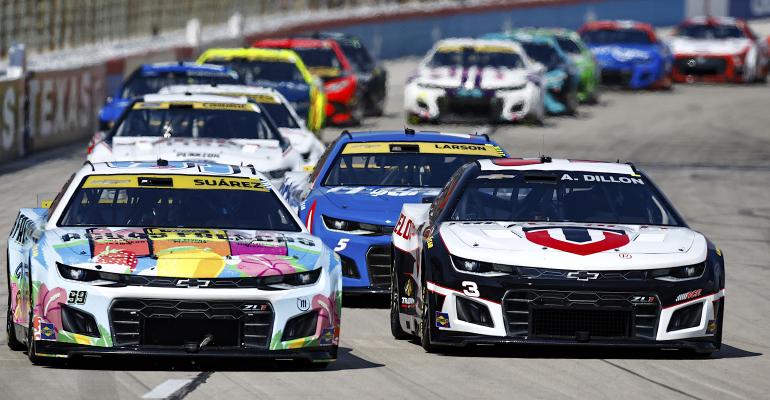 Related: The High-Tech Components of NASCAR's Next Gen Race Car

Naturally, these potential race winners and their fans were not happy with their races ending prematurely due to tire failure.

However, post-race analysis suggests that it was not a coincidence that these cars were faster than others on the track at the time, and that they were the ones that suffered blown tires.

“We met with the teams, working through what the setups were, what the air pressures were to try to get to the bottom of it,” said Nascar senior vice president of competition Scott Miller. “There were a lot of teams that reported no problems to us post-race,” he said. “They did admit to being on the conservative side [in terms of] air pressure and being closer to the suggested minimums that Goodyear recommended.”

There was much confusion in the hours after the race, as Goodyear engineers sought to learn how the teams were employing their tires. “We’ve seen a lot of right rear [tire] issues tonight, not dissimilar to what we saw earlier in the year in Atlanta,” said Goodyear director of race tire sales Greg Stucker in a post-race interview.

“We are getting as much information as we can from the teams, trying to understand where they are with regard to their settings: air pressure, camber, suspension, and so forth,” he said. “I can say without a doubt air pressure is playing into it. We know that plays a part. I’m not saying that’s the only thing, but it is certainly a factor and we’re just trying to understand everything else that might be going on.”

But Rodney Childers, crew chief for Stewart-Hass driver Kevin Harvick, said in a statement on Twitter that he already knows the true root of the problem: Nascar’s limits on suspension travel and the aerodynamic benefit of getting the car lower to the ground.

“The reason there are tire issues is the shock limiter rule,” Childers stated. “The teams wouldn’t be running the tires [with] lower [pressure] if you could get the car lower in the back and the diffuser to its optimal downforce point,” he said. “If you could run the car lower with the suspension you would actually run more air in the tires to keep the travel more consistent. Another option that would help is make the rear diffuser where it makes the most downforce with it a half-inch higher than it is (kinda impossible).”

Crew chiefs would prefer to lower the cars by adjusting the suspension to get the diffuser closer to the ground so it can create more downforce, but that isn’t an option, Childers said. “Right now you can’t really get the diffuser down to the optimal spot for maximum downforce, because you are locked by the limiters. Your only way to get it lower and go faster is to let air out of the tires.”

It might not seem as if reducing air pressure in the tires would lower the car much, especially not with this year’s low-profile tires on 18-inch wheels, which have far shorter sidewalls that the tires Nascar ran until this season. But it turns out not to take much change to boost downforce usefully. “If you get the diffuser 0.100-inch lower by squishing the tires more, it is free speed,” Childers said. “[It is] like you added more spoiler to the car.”

Of course, teams have been using the same tires all season. The problem arose at this race because of unique conditions at Texas Motor Speedway, according to Childers. “The Texas track configuration makes it worse,” he said. “Less speed, less banking, less load on one end of the track compared to the other. So to keep the car low enough and be fast in [turns] 1 & 2 where you can pass, you have to be bumping limiters “some” in [turns] 3 & 4. Hitting solid rods puts all the load through the tires.”

So the teams could see new limits on their tire pressure options, camber settings, or other setup specifications, while Goodyear could adjust their tires’ construction or rubber compounds. But according to Childers, those are solutions that chase symptoms, not the cause of the problem.

“Get rid of the limiter rule,” he said. “It has caused nothing but issues the entire year. It would make every team want to run more air in the tires.”

A bonus to this change would be improved wheel-to-wheel racing, Childers said. “Some of the reason the racing isn’t as good at some tracks. Drivers aren’t going to race door-to-door when they are scared to death through [turns] 3 & 4.”