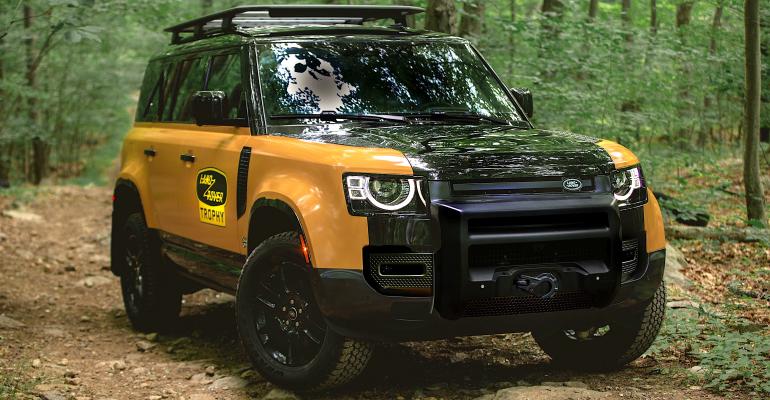 Start Slideshow ›
Consider it your ticket to the Land Rover version of American Ninja Warrior.

Obstacle course competitions like American Ninja Warrior are popular entertainment, but it is difficult to earn a spot on such shows.

But Land Rover is ready to sell off-roaders a chance to participate in the automotive equivalent, with the announcement of the Land Rover Defender Trophy Edition.

Related: Land Rover has been Defending the Realm Since 1948

The company will sell 220 of these souped-up Defenders, and buying one permits the owner the chance to enter the U.S. Trophy Competition, where two-person teams will compete in Defenders on an off-road driving adventure.

Land Rover's Trophy Competition has slots for 90 teams and entry is first-come, first-served, so interested mud-loving drivers should move quickly.

The U.S. competition will be a one-day contest held at the Biltmore Estate in Asheville, N.C. The 15-team waves of competition start Oct. 11, 2021. The winning U.S. team will advance to a world championship at Eastnor Castle, in England, which is the site where Land Rover traditionally does its vehicle development testing. That will occur in early 2022, though the exact date has not yet been announced and presumably will depend on the pandemic conditions at that time.

The $90,000 Land Rover Defender Trophy Edition is available in August, and you’ll want to hurry to get some practice in before the big competition!