HomeAutomotive EngineeringInnoviz Gears Up for Level 3 Driver Assistance
Recent
Automotive Engineering
Novel 3D Printing Method Used to Replenish Coral Reefs
May 16, 2022
Volkswagen’s Electric Successor to the International Scout 4x4
May 16, 2022
The Music Is Over For Apple's iPod
May 16, 2022
Q&A With IndyCar Gearbox Expert Anna Chatten
May 13, 2022
POLL
Intel Unveils Trust Authority to Boost Security
May 13, 2022
Supplier News Looks at Highly Customizable Industrial Monitors
May 12, 2022
Here Technologies Maps are Key to Mercedes Level 3 Automation
May 12, 2022
'We Built the Domino's Pizza Tracker for Manufacturing'
May 12, 2022 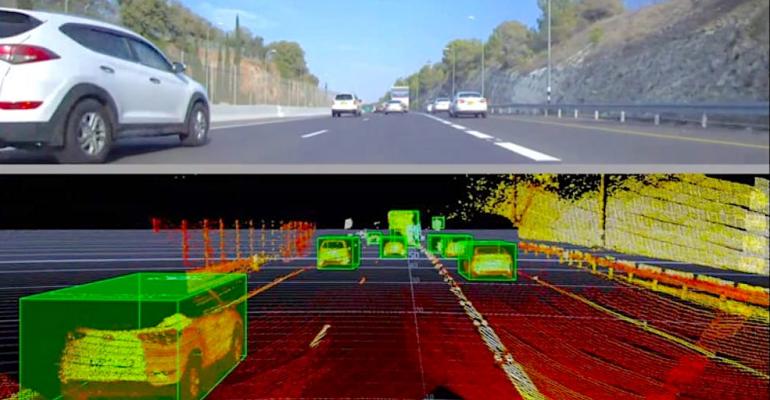 Innoviz lidar technology identifies and classifies objects within the field of view ahead.
Lidar is getting better and cheaper just in time to contribute to Level 3 driving next year.

Israeli lidar start-up Innoviz Technologies launched in 2016, but 2022 is the company’s watershed year as first customer BMW begins delivering cars to customers that are equipped with InnovizOne solid-state lidar.

This follows Innoviz’s launch of InnovizTwo, a solid-state, forward-looking radar device that will provide future cars with improved range, field of view, and resolution at a price that is 70 percent cheaper than the InnovizOne system that is coming to market in the new BMW iX crossover EV.

Along the way, Innoviz has announced partnerships with Tier 1 suppliers Magna, Apriv, Hirain, and Samsung. Later this year, the company will provide samples of Innoviz360, its first foray into 360-degree lidar, which will target other markets while the forward-looking solid-state lidars cover the passenger car segment, according to CEO and co-founder Omer Keilaf.

This is also a crucial year because automotive OEMs are in the process of selecting their vendors for lidar components, he said. “There are five or six major car companies that are going to make their decisions in the next six months or twelve months,” said Keilaf. “This decision window is what we call ‘the money time.’”

Winning these contracts now is crucial because the incumbent supplier will have an advantage in future deals with those companies. This account control is the main reason why Innoviz has focused on the opportunity for forward-looking automotive lidar, which is being followed by the 360-degree product.

“Once you win BMW (as a customer), it is a relationship that stays for many years,” Keilaf observed. “The barrier to replacement (as a supplier) is very high.” This is why Innoviz was pedal-to-the-metal on its forward-looking lidar products.

“We want to get the biggest market share as possible. The other markets grow slower and there is very low loyalty in non-automotive markets,” Keilaf said.

While the InnovizOne that will appear in BMW models, including the iX EV, 5-Series, and 7-Series get the company started, it is the InnovizTwo that is the true game-changer, according to Keilaf.

That’s because its improved performance and reduced price will make SAE Level 3 driver assistance available on more affordable models. The InnovizOne costs about $1,000 and has an angular resolution of 0.1 degrees (both horizontal and vertical), 115-degree x 25-degree field of view, configurable frame rate between 5 and 20, and a detection range as long as 250 meters.

These are the kinds of capabilities that will drive the availability of L3 driver assistance systems, said Keilaf. The cost reduction has been possible because Innoviz has replaced the four lasers and detectors in the InnovizOne with a single laser and detector in the InnovizTwo while increasing the unit’s capabilities.

With so much happening for Innoviz in 2022, it will be interesting to see what 2023 holds for the company after more automotive OEMs have made their lidar supplier selections.