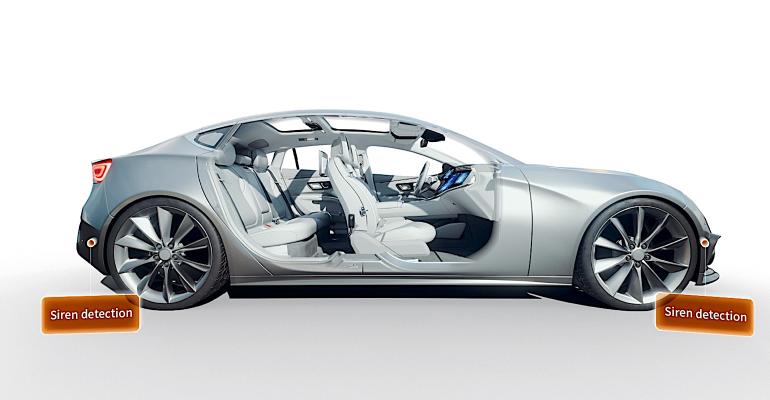 Driving the Mercedes-Benz EQS EV at that company’s proving grounds, I was able to experience how the car’s SAE Level 3 driver assistance system was able to recognize when an emergency vehicle approached from behind from the sound of its siren.

Related: What it is Like to Trust Mercedes Drive Pilot’s Level 3 Driver Assistance

These Infineon mics are the same type that automakers can use inside cars’ cabins for features such as voice recognition, noted Infineon Automotive Technologies division president Peter Schiefer in a presentation for the company’s OctoberTech conference. “The microphone is likewise suited for exterior applications, such as siren or road condition detection,” he said.

Reflecting on the arrival of Mercedes’ SAE Level 3 automation, Cerence’s director of product management, Stefan Hamerich, observed in a post on the company’s site that “Cerence Emergency Vehicle Detection (EVD) is one of the most critical examples of how the co-pilot can understand the world around it and make roads – and drivers and passengers – safer as a result.”

A challenge in identifying sirens is the incredible variety of sounds employed worldwide. According to Cerence, there are more than 1,500 different siren sounds that the company’s AI is trained to identify. The Level 3 Mercedes Drive Pilot technology automatically stops the car on the right side of the lane when a siren is detected, making room for the vehicle to pass on the left side.

Cabin-mounted microphones listen along with vehicle occupants as the entertainment system blasts music. Knowing what that sounds like lets the AI filter the music out of the sounds detected by the outside microphones, so it can tell what is a siren and what is Axl Rose.

Hamerich also points out the importance of systems that employ sound to detect emergency vehicles rather than simply relying on cameras to watch for their flashing lights. “Sensors that detect incoming emergency vehicles using images and lights are limited in situations when they are blocked or impeded by other cars or bad weather,” he wrote. “Using multiple sensors, Cerence EVD helps ensure early detection that can enable countermeasures to save critical seconds in an emergency.”

The Infineon MEMS microphone is hardened for service on the outside of the car, and is qualified according to AEC-Q103-003. That means it can tolerate an operating temperature range from -40°C to +105°C. It does so with a total harmonic distortion (THD) of less than 0.5 percent at a sound pressure level of 94 dB and a high acoustic overload point of 130 dBSPL, so the mic captures distortion-free audio signals in noisy environments, says Infineon.