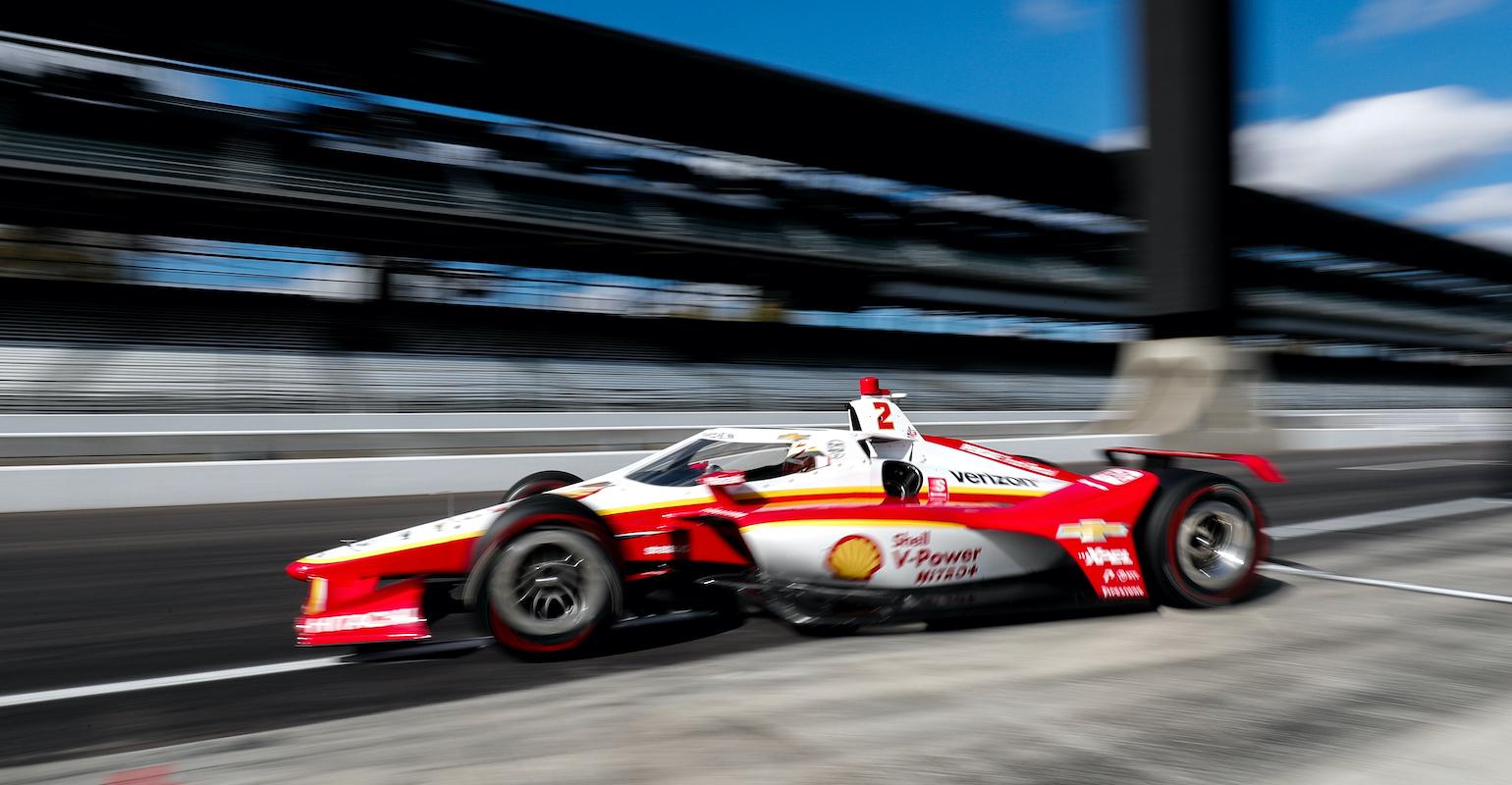 The race series didn’t have time to update its cars’ aerodynamics after incorporating the Aeroscreen this season.

In the rush to develop, approve, manufacture and field the driver-shielding Aeroscreen for the 2020 season, Indycar did not have time to simultaneously develop corresponding aerodynamic changes to go with it, reports Indycar director of aerodynamic development Tino Belli.

So Indycar asked the Rahal Letterman Lanigan Racing team and Team Penske to bring cars to the Speedway to test various aerodynamic parts to validate their results against wind tunnel and computational fluid dynamics models, he explained. 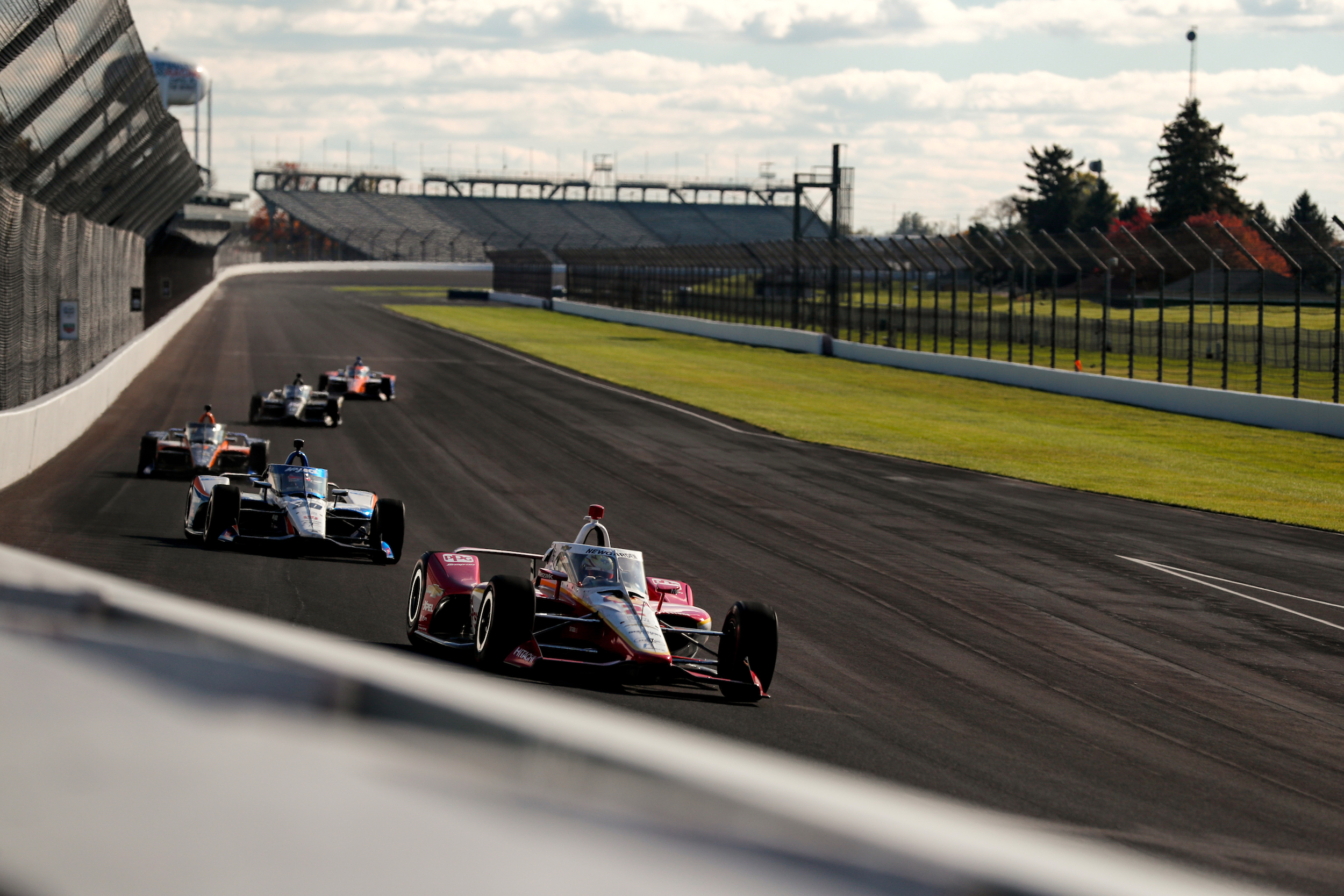 The teams instrumented the cars with Bosch radar to measure the distance between cars so they could consistently gauge the aerodynamic effects on trailing cars at distances of 40 meters, 20 meters, and 10 meters with 1.5 meters of offset from being directly behind the lead car. “It is basically the trajectory of an overtake at the Speedway,” Belli said.

For consistency’s sake, the teams repurposed the cars’ pit lane speed limiters, setting them to 200 mph so that the cars were driving exactly the same speed for all the tests. “It allowed them to latch the car into a very scientific position,” he said. Indycar needed to validate its modeling because models of multiple cars are impractically complex when evaluated in great detail.

“In CFD there are a lot of methods of calculating results,” Belli explained. “The air coming off the leading car is very dirty,” he said. “Because of that, the highest level of computation requires a supercomputer and weeks of calculations.” That isn’t practical for organizations that are not government subsidized, so the solution is to devise shortcuts that let engineers do only meaningful calculations while ignoring irrelevant portions of the data.

“You need to work out which bits of the calculation you can turn off to make it more expedient and economical,” he said. At the end of the day, Indycar engineers huddled with RLL and Penske engineers to compare notes to ensure that everyone’s numbers agreed. 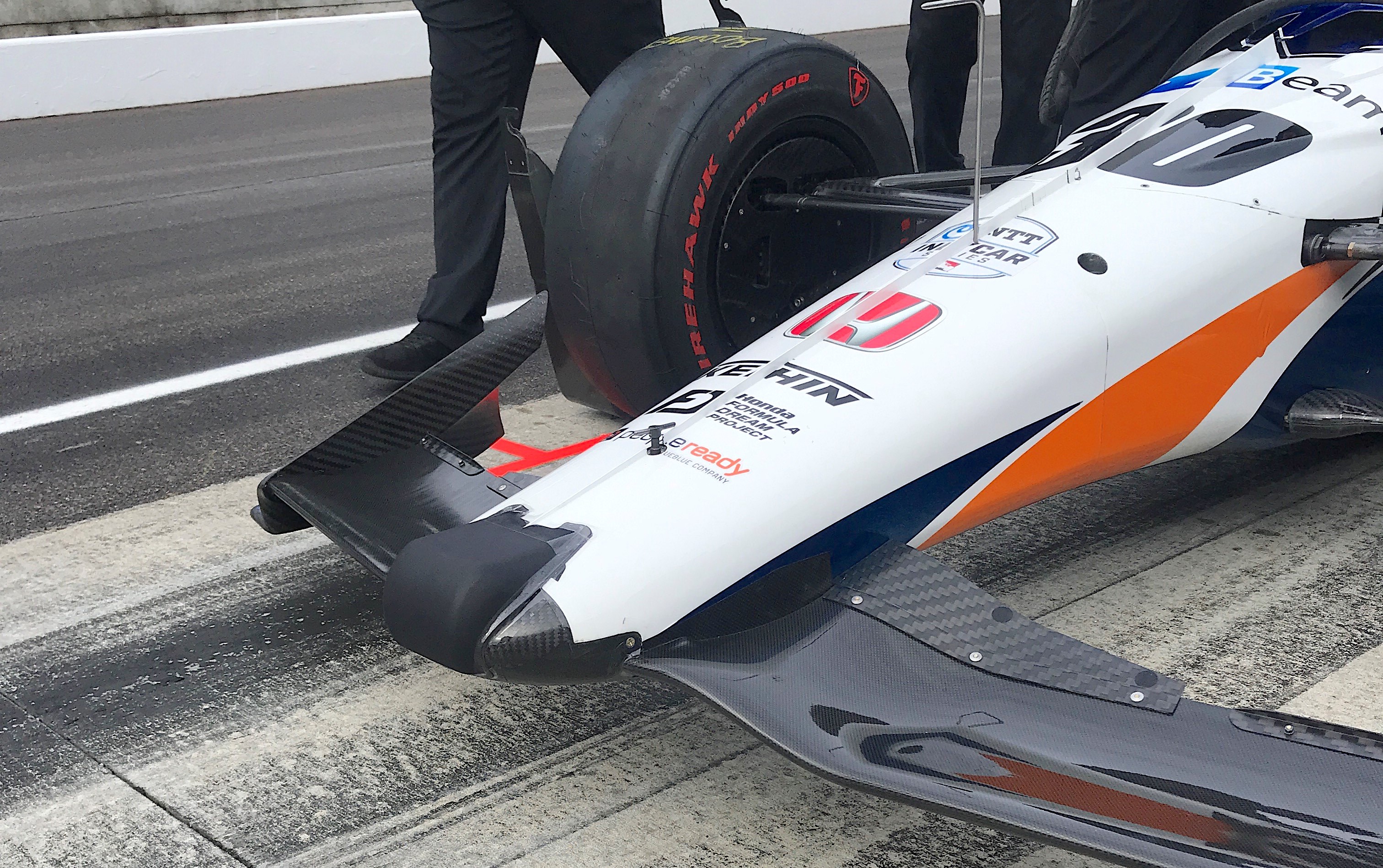 The Bosch radar on the nose of the Dallara measures the distance to the car ahead.

Rain washed out the planned second day of testing, serendipitously providing a break for engineers to sort through the data and plan for a productive third day. “Gave us more time to do analysis,” Belli observed. “[Car constructor] Dallara had engineers in Italy five hours ahead of us and they were working when they got back into work in the morning. When we got in they’d already managed to crunch a bunch of numbers down to work out the best things for us to test on October 30th.” This made it clear that the unplanned off day is an important component of such tests.  “If we do another test like this in the future, we need to put a day in the middle to crunch all the numbers,” Belli concluded.

By noon the Speedway was sufficiently thawed, and the teams dispatched six cars to run 230 mph laps in three consecutive sessions, each testing a different configuration. “Every configuration did what we expected and every one was a step toward making the car feel better and better,” Belli reported. 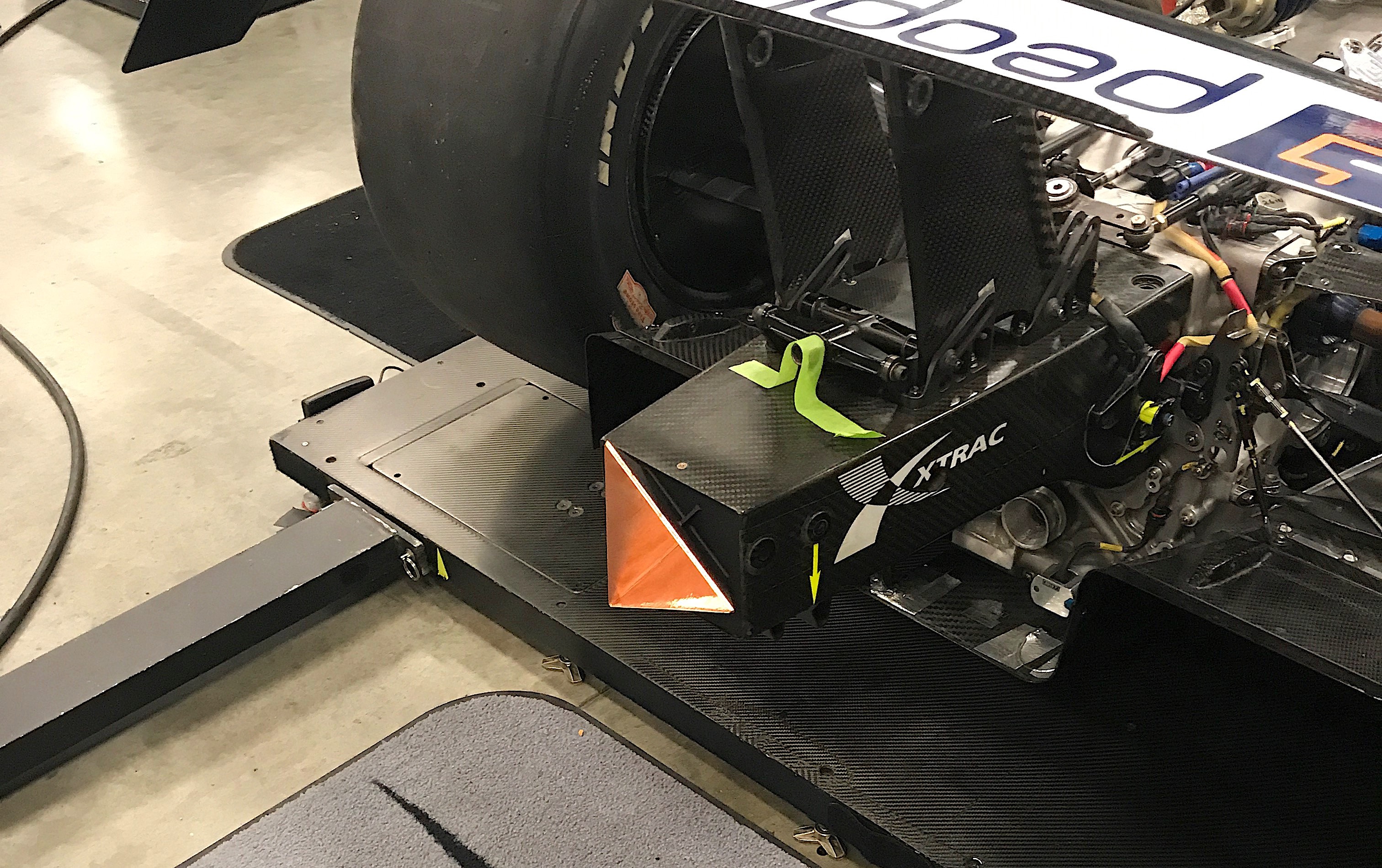 This pyramid-shaped reflector mounted to the Dallara's rear impact attenuator provides a target for the following car's radar.

The goal of the parts being tested is to restore some of the downforce removed from the front of the Dallara’s Indycar when the IR18 arrived with its revised bodywork in 2018. The purpose then was to reduce downforce to make the cars more challenging to drive.

However, the introduction of the Aeroscreen in 2020 piled weight onto the front of the car, inducing understeer. Indycar and Dallara wanted to rebalance the car for 2021, so now they’re doing the aerodynamic detail work that there wasn’t time to do while introducing the Aeroscreen.

The IR18 has an opening in the flooring behind the front wheels to reduce ground effect-induced downforce. That contributes 80 percent of the car’s total downforce in its superspeedway configuration, with the wings contributing 20 percent to let teams trim the cars as needed, according to Belli.

The three solutions evaluated for 2021’s Indy 500 are to close off some of the openings in the floor, to introduce Formula 1-style vertical “barge boards” to steer the air behind the front wheels, and to add a strake atop the floor. The strake has been previously employed in races at Pocono Raceway, but never at Indianapolis. 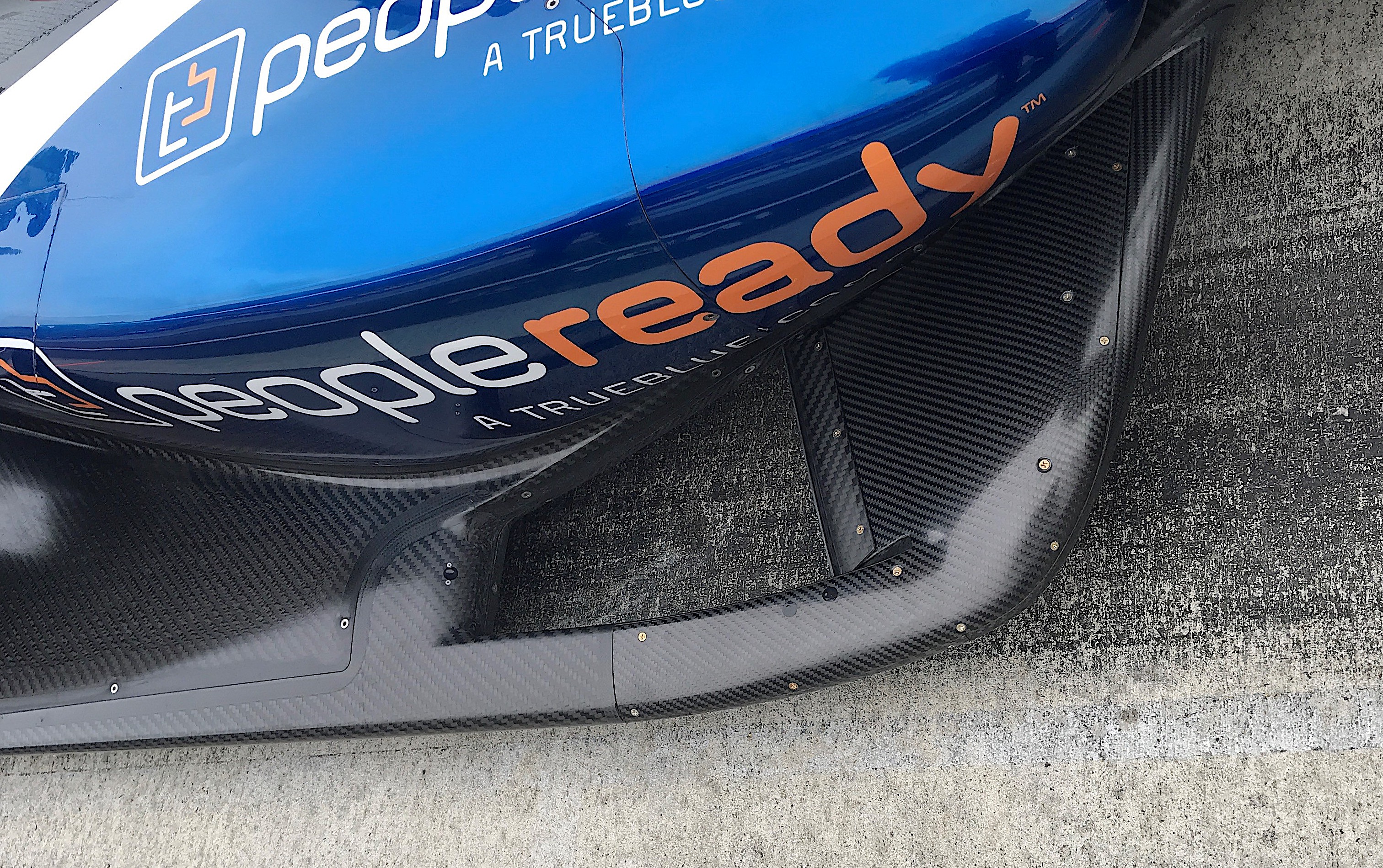 The reduced size of the opening in the Dallara's floor provides increased downforce.

Over the winter, Indycar officials will consider the three choices, looking at the results of the aero tests and pick a solution for the 2021 edition of “The Greatest Spectacle in Racing.” Then they will further mull whether to make the selected parts mandatory for everyone or optional, for the teams that want to use them.

Belli speculates that teams whose drivers qualify further down in the field will have the most to gain from the changes, which should make the cars more stable while racing in traffic, so they can work their way toward the front. “The guys who typically qualify and run upfront, I don’t see it making any difference,” he concluded. 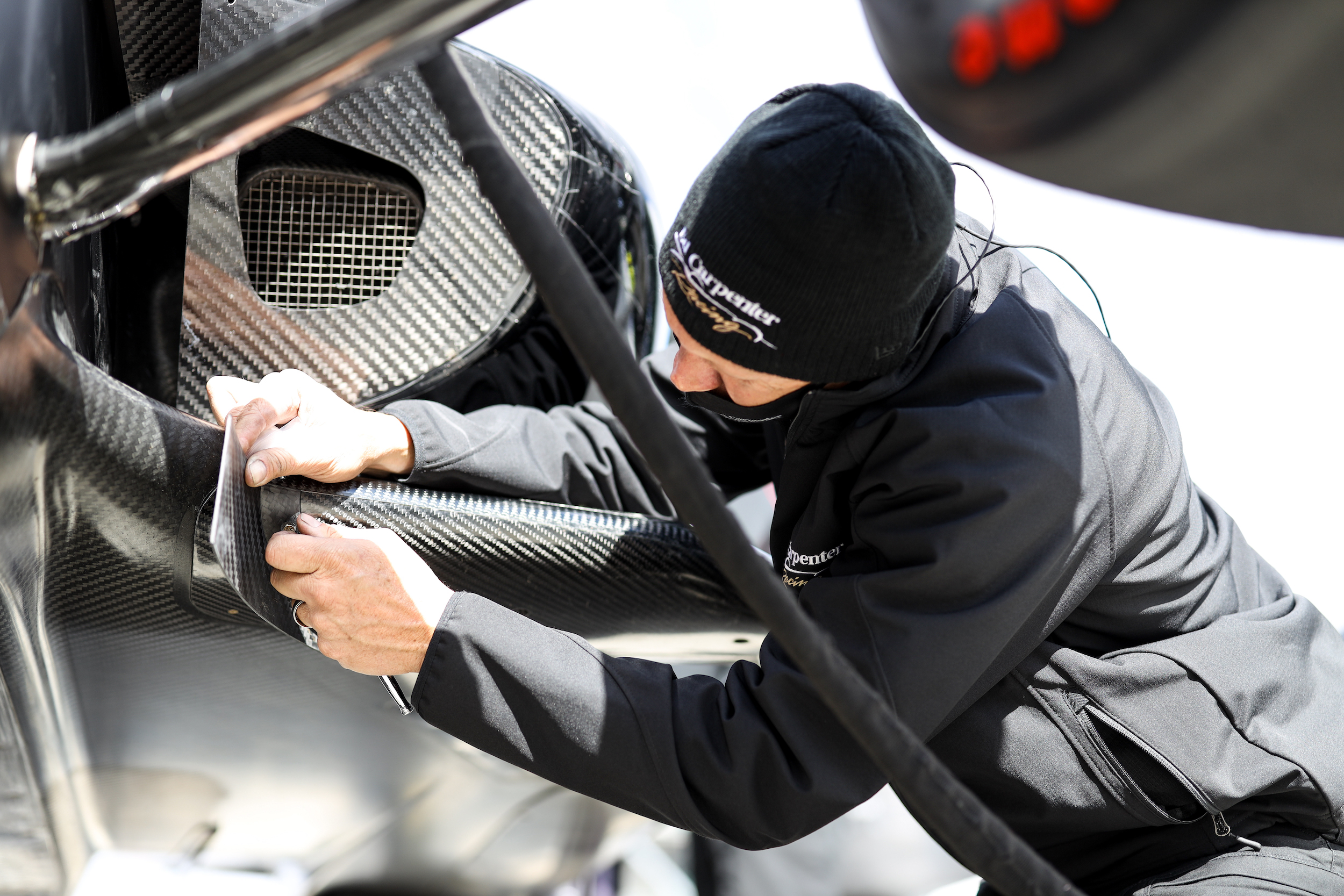