How to Build a Better Formula 1 Car 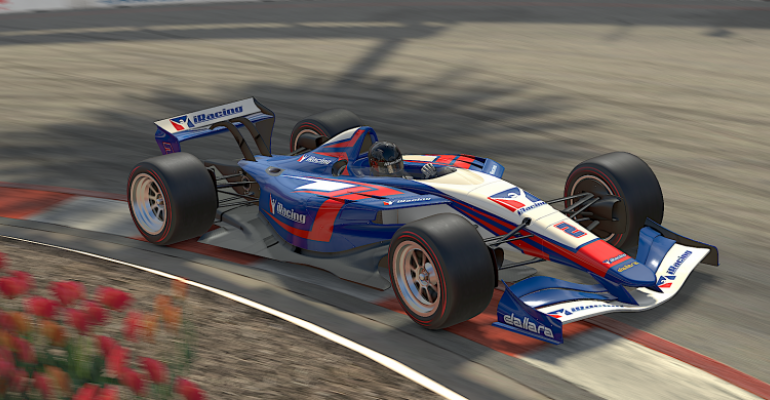 We asked Dallara to describe how they created a virtual F1 car for iRacing.

The Mercedes Formula 1 team has won every single Formula 1 world championship since 2014 under the current technical regulations and has won the most races by far during that same time. Before that, the Red Bull F1 team won four consecutive championships.

At the same time, fans have criticized the cars for becoming less thrilling and less beautiful. With this in mind, and with its online virtual racing booming during the pandemic, Steve Myers, executive vice president at iRacing.com Motorsport Simulations, LLC got the idea for a car for which fans clamor. Something simpler, better-looking, and better-sounding than today’s hybrid-electric V6 F1 cars.

He took this idea to his friend, Andrea Toso, head of vehicle dynamics and performance at Dallara Automobili, the company that constructs every car that runs in the Indy 500. We asked Toso about the process of creating the company’s first virtual race car. 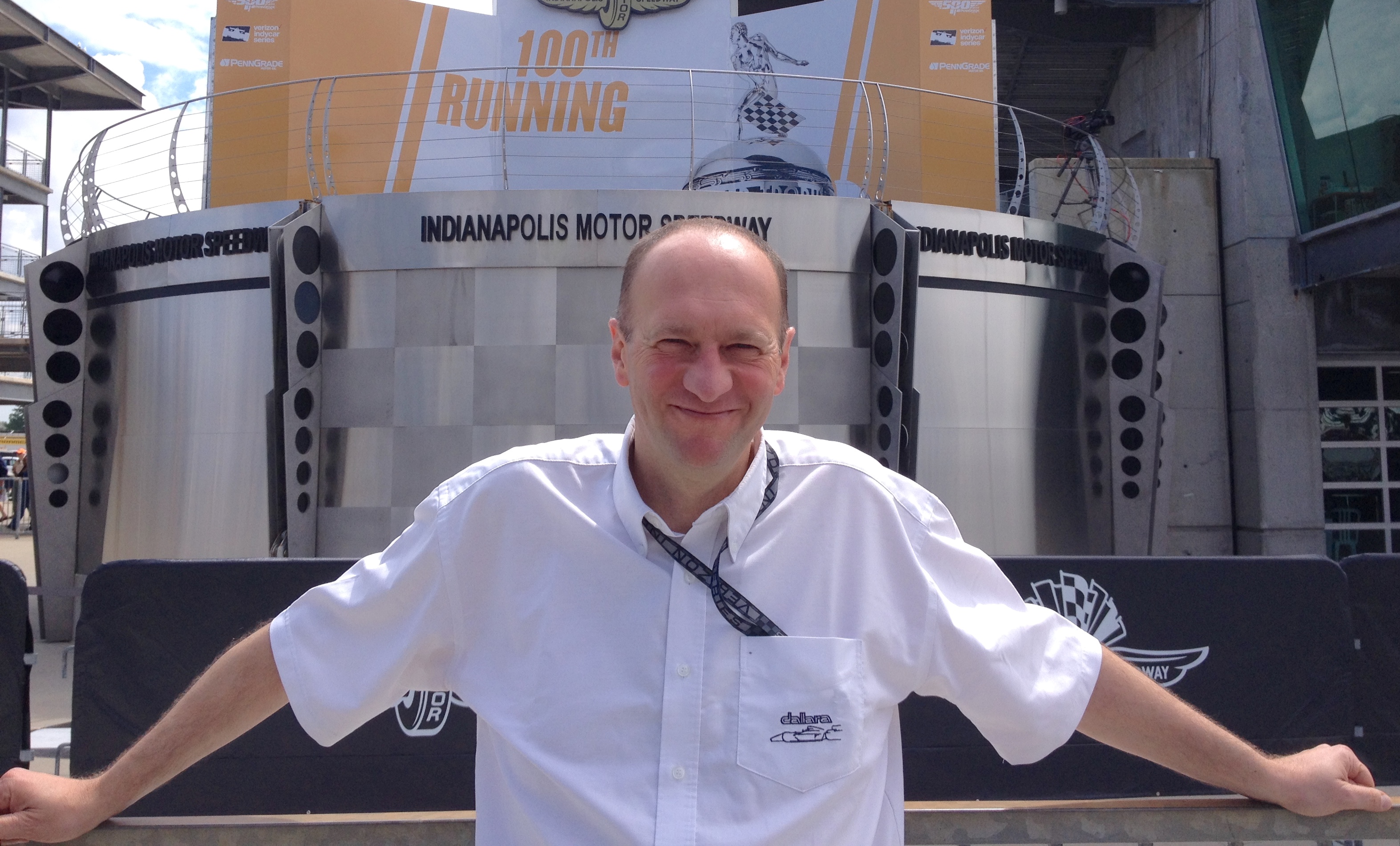 Design News: Is the kind of domination that we’ve seen by the best technical solution the price of having sophisticated race cars in Formula 1? Do the drivers even matter?

Andrea Toso: [The drivers] are pretty good, all of them. So, if you jump from a Williams to a Mercedes, you will go from the back of the grid to the front. The car makes the difference.

The people are interested in the drivers, not in the cars. Which is an odd situation. The teams and manufacturers spend a lot of money to make the cars go faster but the fans care for the drivers, they care for the people. Fans want stories about people.

DN: So what is the role of the car in racing?

Andrea Toso:  The car is the platform, the foundation. But it shouldn’t make a difference.

This is not the primary interest of the fans.

DN: How does the virtual car that Dallara created for iRacing address this situation?

Andrea Toso: The idea was how to create an exciting car with a futuristic retro flavor. In a simple car, you don’t see many aerodynamic bodywork add-ons. It is clean, simple.

Because number one, not too much aerodynamics. With aero, you go faster in the corners slower on the straits, and the shorter the braking distance. You end up with bad racing.

The second factor was the tires. We used 18-inch tires. Big tires. Their relative size is much wider than Formula One tires. The bigger tires make the driver challenged to go faster.

The third factor is visibility. As a virtual car, we can go away from the Halo. You still want a proper cockpit size. It is the driver’s office.

The car has simple electronics. There is no Drag Reduction System, active differential, or traction control. It takes maybe 10 laps to learn this car.

Concept sketch art of the iRacing iR-01 by Dallara.

Andrea Toso: It is a matter of translating the desired attributes to numbers. Of looking at the size and characteristics of the tires. Looking at the car’s weight. We cannot fool the sim racers. Many sim racers are professional drivers.
Based on the aerodynamics and the tires, we had to come down to the weight of the car, and we went through a few iterations to makes the physics possible with the aesthetics.

We did the same for the engine. It is normally aspirated, with no turbo. Because of the engine power required, you had to accept [high] fuel consumption. Also, the torque and the heat rejection, which decided the radiator opening size. 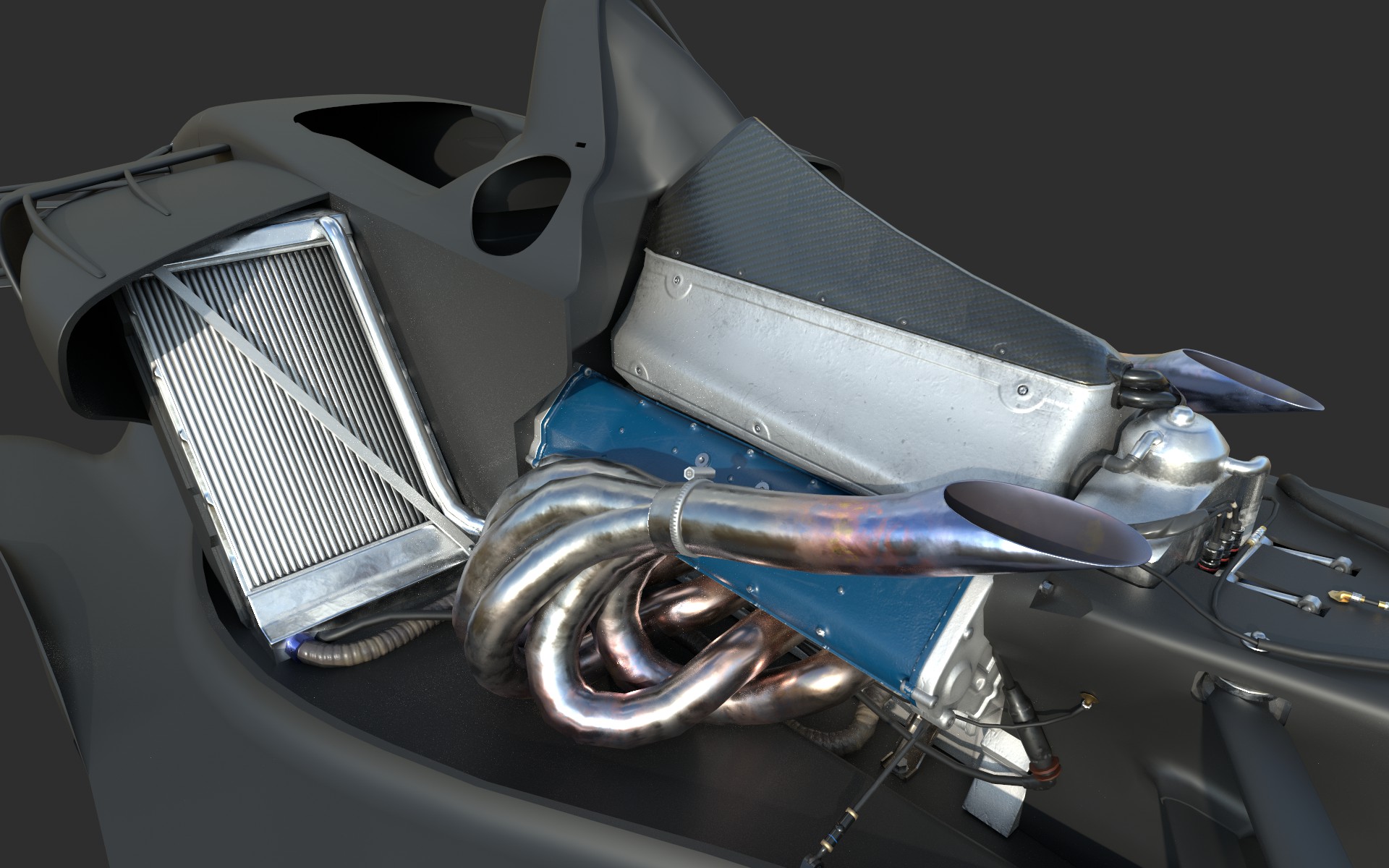 This rendering depicts the packaging of the virtual V10 race engine and its heat exchanger and exhaust in the iR-01.

Andrea Toso: It is not a car every graduate student can create. It is a car that is designed by professional engineers with all the difficulties of designing a car. It took us months.

DN: If a racing series selected this car, could you build real ones?

Andrea Toso: It would be possible. But you have to make an engine. This V10 design takes you back to the 2004-06 F1 engine specification, with an 18,000 rpm redline. To make such an engine today, with all the interest from the manufactures is in hybrids and turbos; nobody would be interested in those nice engines except racers.

DN: Couldn’t an engine specialist such as Cosworth supply the engines? 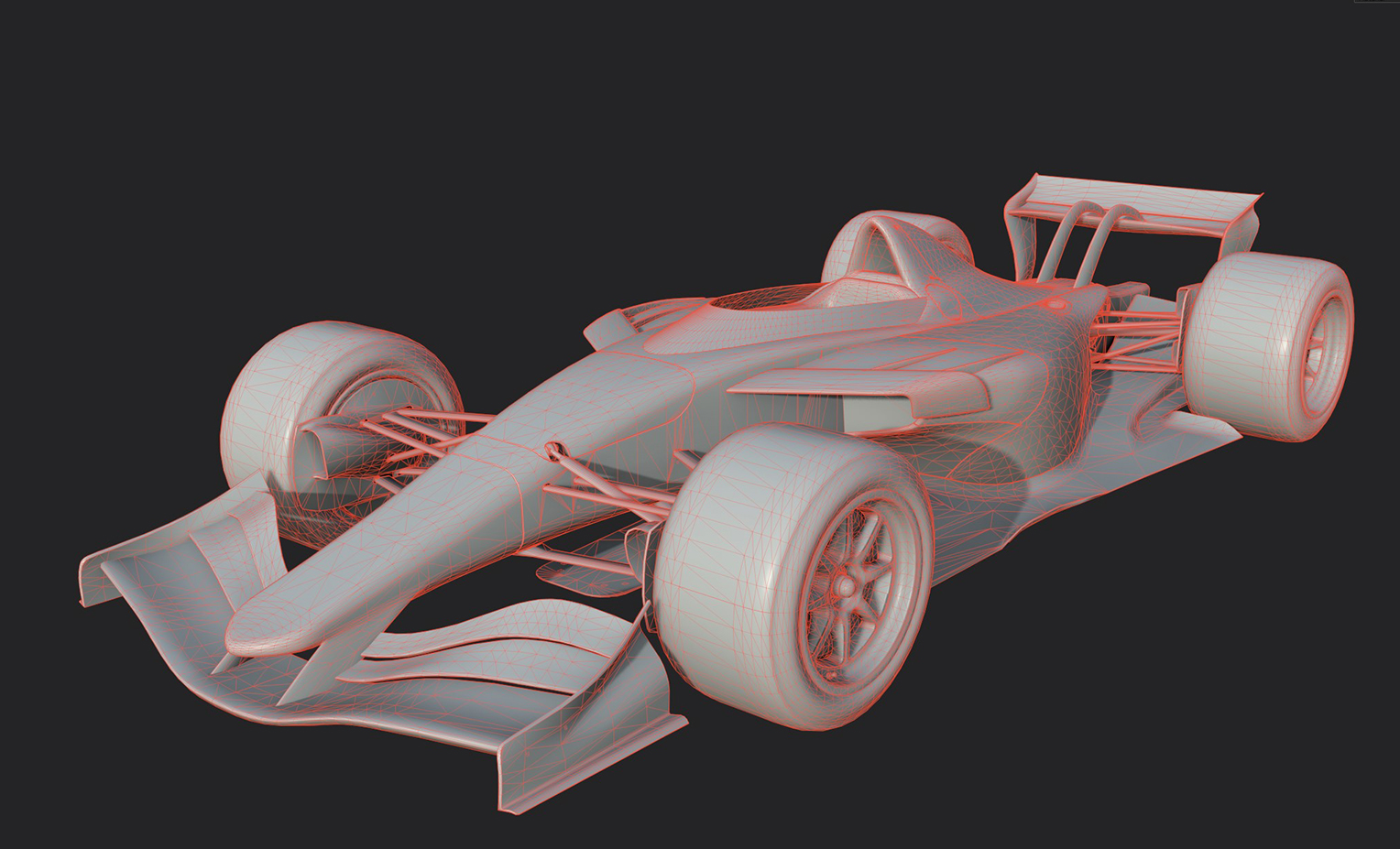 DN: But, otherwise, this is doable?

Andrea Toso: This car has no Halo. There is no way back to an open cockpit without it. Since the Dubai Grand Prix (site of Romain Grosjean’s fiery crash in which the Halo likely saved his life) you cannot make any car without the Halo anymore.

DN: If not this specific car, what lessons from this engineering project could be carried forward into future race car development projects?

Andrea Toso: I’ve been asking myself for these past weeks, and there is a lesson: simplicity. Simplicity. The race cars of today in F1, F2, SuperFormula, even Indycar, are too complicated.

If we were asked by a series to design a car for the future, of course, we will keep all the safety requirements, this is a given. But we will make a very simple car. 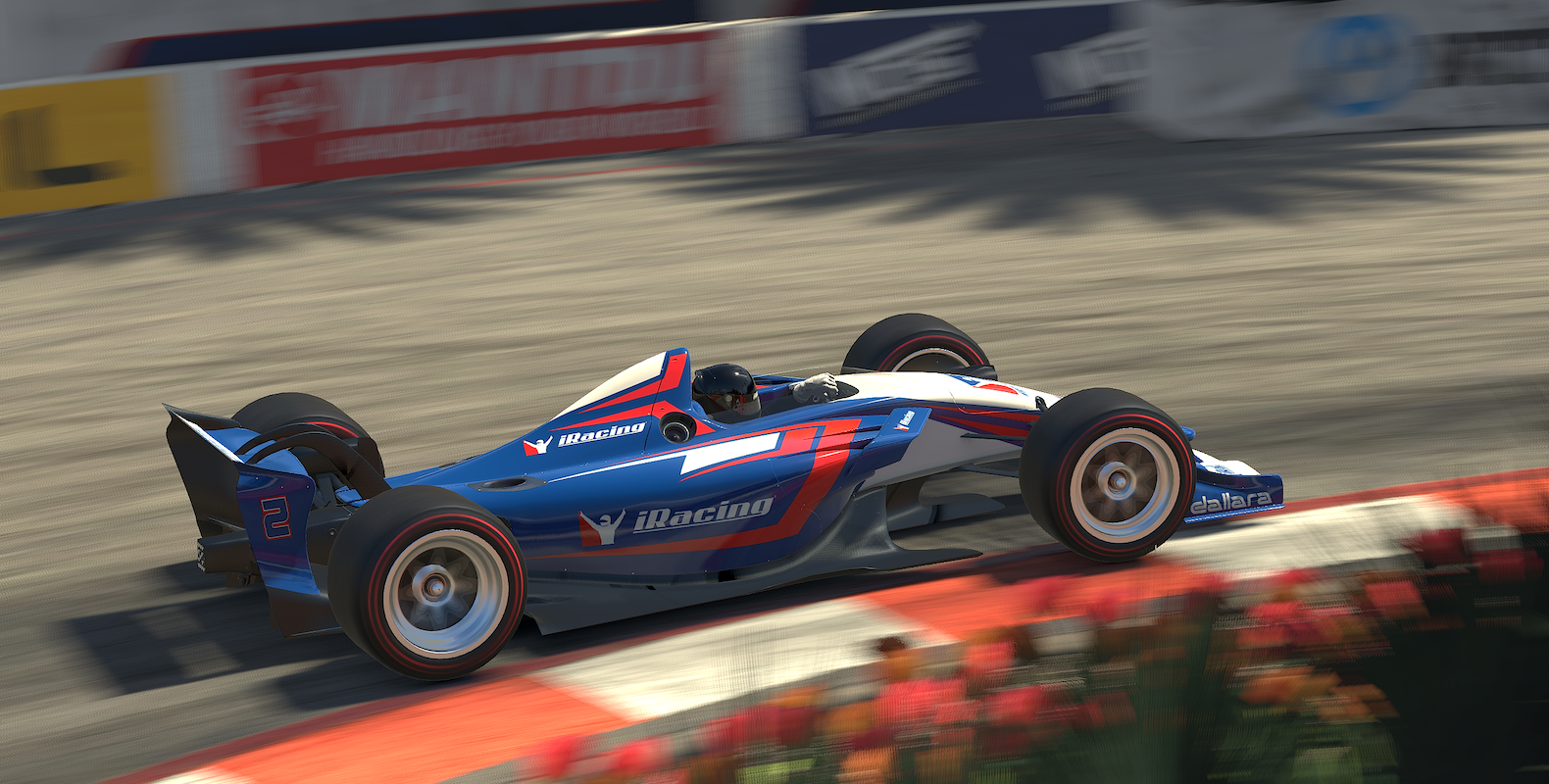 The Dallara iR-01 on a virtual track.

DN: What can you simplify?

No piece of the body could be less than one inch thick or have a radius of less than one inch. It is a simple rule and you clean up all the mess. Designers and engineers should be humble enough to stay in the background, to make cars that are fun to drive. This is the lesson I would take home.

DN: How about future virtual cars? Do you think you will do another one?

Andrea Toso: If we see that the iL-01 concept is good and it draws attention and interest, then maybe we can do a similar exercise for prototype sports cars. I think we ought to make nice sexy race cars. 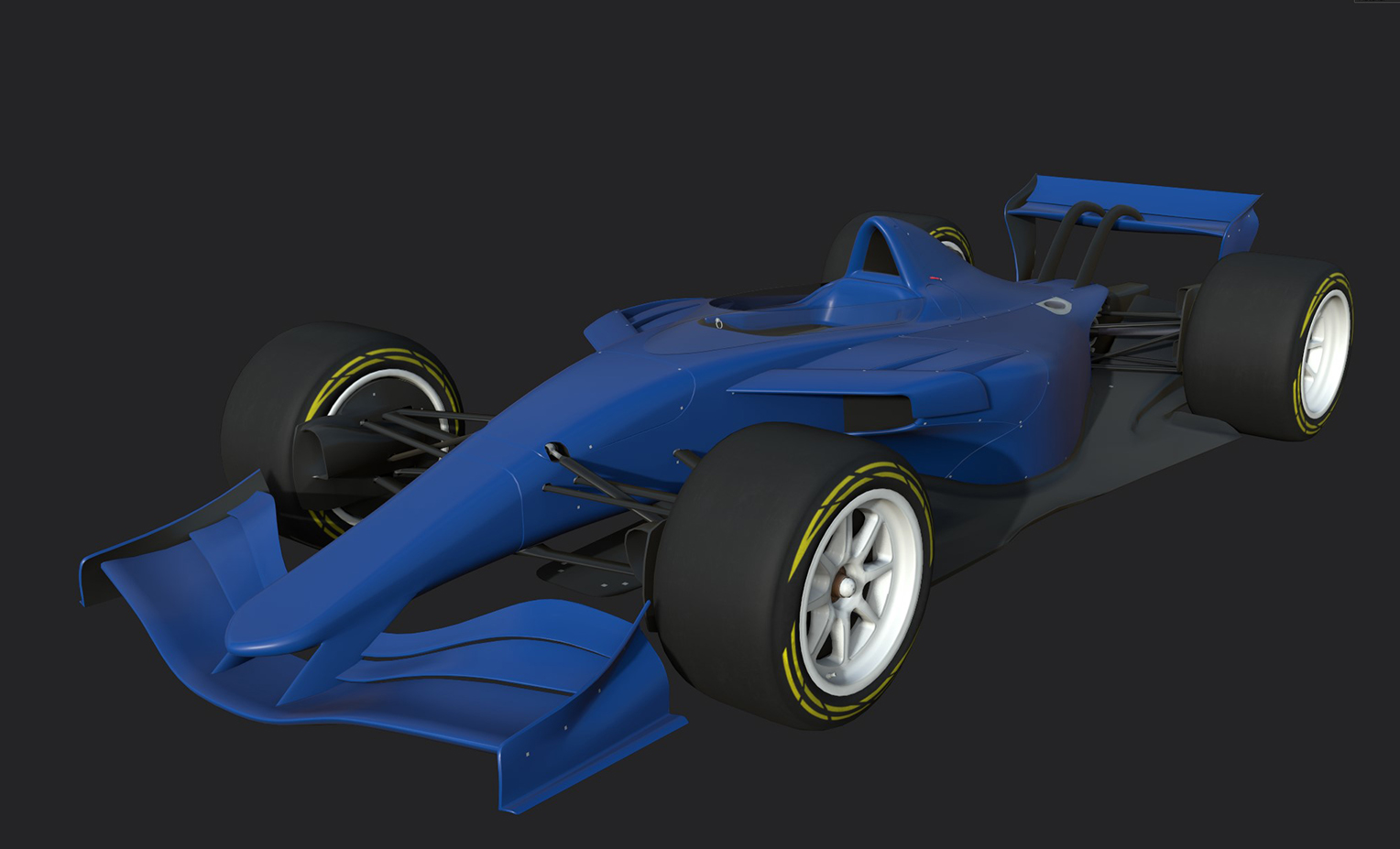 Andrea Toso: Congratulations should go to Steve Myers (executive vice president at iRacing) and iRacing. They are great people. The bottom line is that it is down to people. If you are happy doing business with nice people, honest people then you can accomplish things like this. I’m quite selective nowadays. If you work with bad people you have no fun. Life is so short.