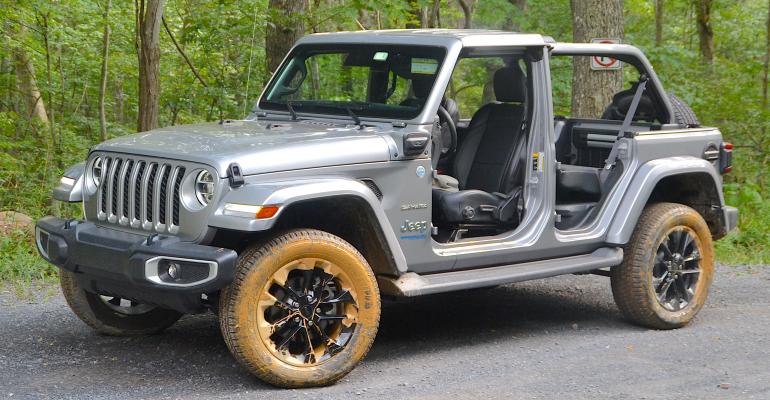 The shift toward electrified powertrains is extending from its beginnings in economy cars to rugged off-roaders like the Jeep Wrangler.

These 4x4s can not only benefit from the fuel-saving attributes of a hybrid-electric drivetrain, but by employing a 400-volt, 17-kilowatt-hour Samsung nickel manganese graphite  battery pack, the 2021 Jeep Wrangler Unlimited Sahara 4xe (they pronounce it “four-by -e,” as a play on four-by-four) can drive 22 miles on purely electric power.

As a hybrid, the 4xe’s main power source is its turbocharged, direct-injected 2.0-liter four-cylinder engine, which channels its power to the Wrangler’s four wheels through a ZF 8-speed planetary automatic transmission. In place of the usual hydraulic torque converter, the transmission packs an electric motor/generator that provides the electric drive.

Working together, the gas and electric motors produce 375 horsepower and 470 lb.-ft. of torque, which can accelerate the brawny 4x4 from a standstill to 60 mph in a creditable 6.0 seconds. They also produce an EPA fuel efficiency rating of 49 miles per gallon equivalent. Switching the Wrangler to gas power alone, the EPA says to expect 20 mpg, though we experienced 18 mpg in highway driving using gas-only mode by pressing the dashboard’s “eSave” button.

Related: Ford Bronco Employs Impressive Technology in its Bid to Buck Jeep from the 4x4 Throne

We did that so that we could arrive at Virginia’s Tasker’s Gap off-highway vehicle trail for some off-road testing with a fully charged battery pack. This let us press the “Electric” button to experience electric-only off-road driving, which produced some surprises along with some expected results. We were able to drive about 25 miles through the woods over the next two hours without needing the gas engine before the battery was depleted.

Because electric motors deliver peak torque immediately, the Wrangler 4xe is easy to drive through the outback, with smooth and progressive power deliver that lets the Jeep cruise over the terrain effortlessly.

The advantage we hadn’t considered is the silence of the 4xe powertrain when driving in electric-only mode. With the roof and doors stripped off the Wrangler (oof, the roof is heavy, especially with the optional extra sound deadening), the absence of any engine noise emulates the experience of a pleasant walk in the woods. 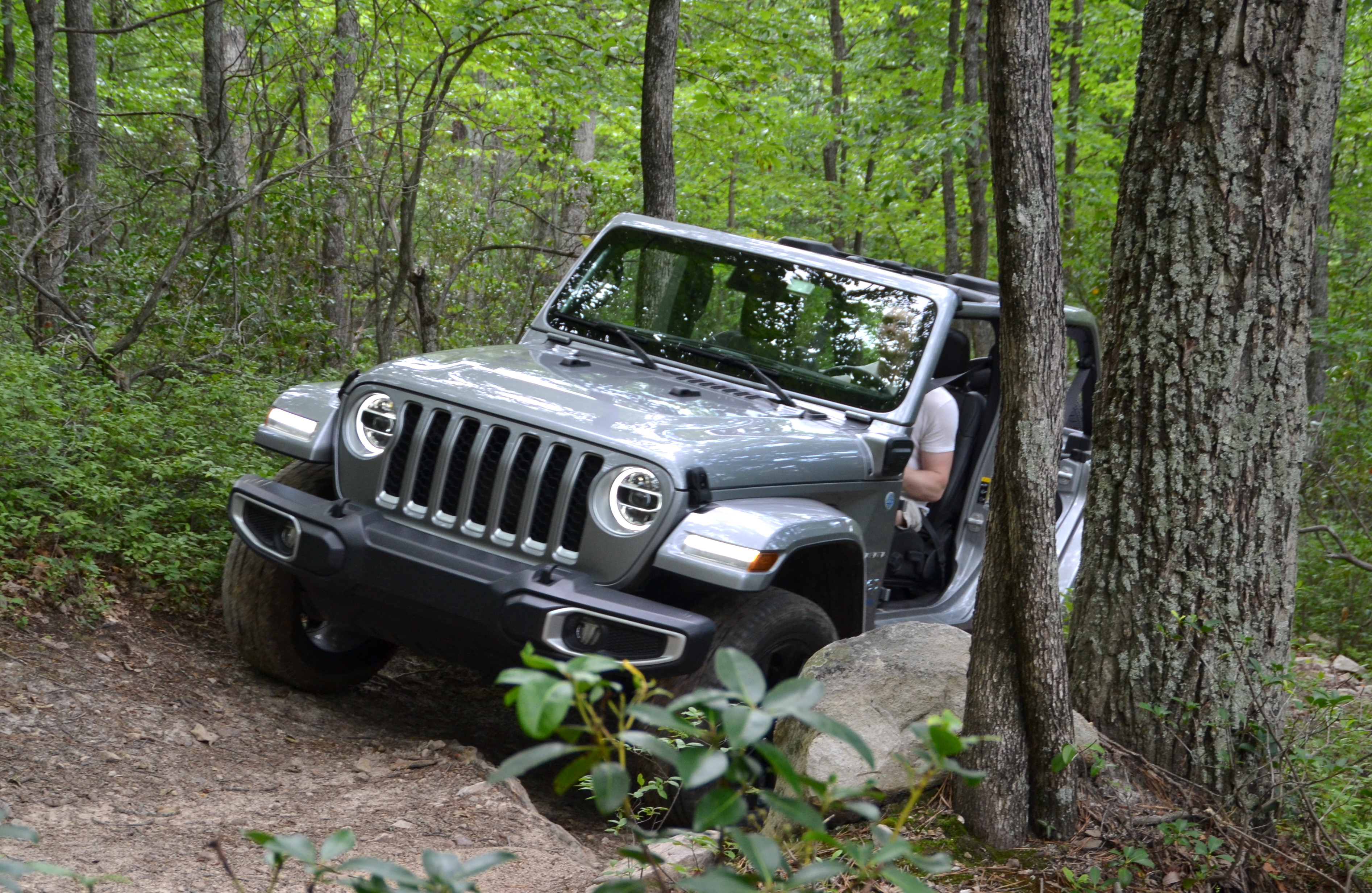 The four-door Wrangler Unlimited illustrated the advantages of the shorter two-door model while squeezing its way around obstacles on the trail.

Our test vehicle was a $56,380 (base price $47,995) Wrangler Unlimited Sahara 4xe. Decoded, that means that it was a four-door model (Unlimited) with the second-most-capable off-road equipment package (Sahara). That means our Jeep featured Dana 44 front and rear axles, a two-speed low-range transfer case, and skid plates to shield the Wrangler’s vulnerable parts. The 4xe electric drive components are also sealed against water, so the hybrid has the same 30.5-inch water fording rating as the gas-only models.

Unfortunately, our test truck was also equipped with the urban-centric optional 20-inch aluminum wheels and low-profile Bridgestone Dueler H/L tires, which exposed the Jeep to much greater risk of tire or wheel damage on the trail. Accordingly, we took it very easy over rocks and other obstacles that could potentially cut a tire during our trail drive. The tire tread was not well-suited to the task either, but we weren’t slogging through deep sand or snow, so they did fine over the rocks and through mud holes we encountered.

Still, as a Jeep Trail-Rated model, the Sahara does boast electronic aids such as Selec-Speed Control with Hill Ascent. This is the equivalent of highway cruise control for the trail, letting drivers set a speed between 1 and 20 mph and the Wrangler will automatically maintain that speed even while climbing or descending so the driver can focus on steering.

The Hill Descent Control system does the same thing while heading down particularly challenging trails, individually braking each wheel to maintain the same safe, steady speed without requiring the driver to master the talent of two-foot driving, when they use their right foot on the accelerator pedal and their left foot on the brake pedal to maintain control. 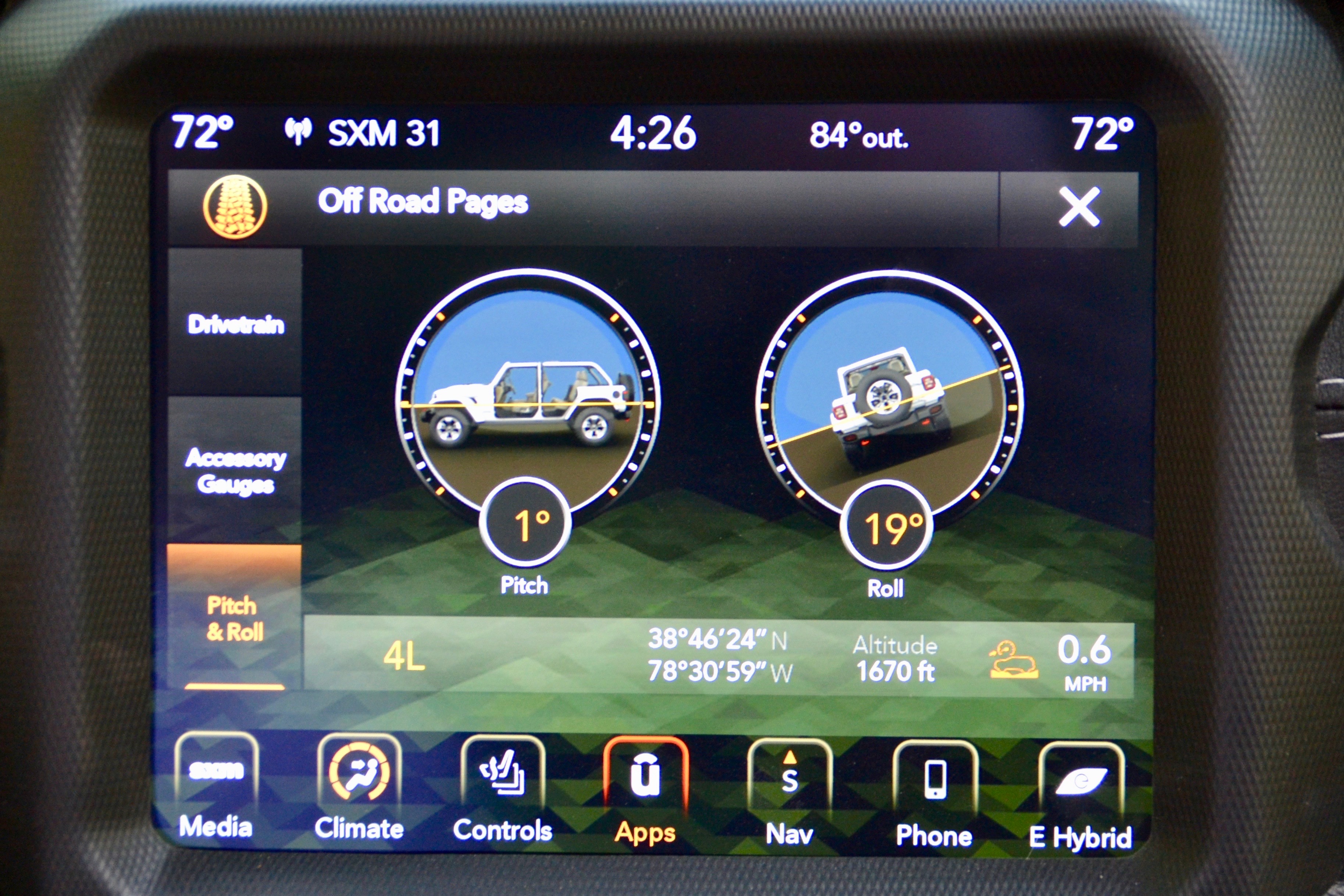 The Wrangler's Off-Road Pages on its infotainment system provides details about the vehicle's exact attitude, latitude, longitude, and altitude.

With the electric motor providing its abundant, smooth torque delivery, these systems feel even more effective then with gas power, with more precise control of the Jeep’s speed and power. The electric drive system is a notable advantage for the Wrangler compared to the Ford Bronco we tested recently, and the hybrid drivetrain delivers much better fuel economy than the Ford’s available gas engines.

Where the Bronco holds a big edge is in the road-going driving experience, thanks to the Ford’s independent front suspension system and rack-and-pinion steering, which both contribute to the Bronco’s easier, more relaxing highway experience. Rather than continuously herding the Wrangler to keep it in the lane, the Bronco accurately holds the intended course without constant corrections, so the experience of driving to the off-road trail is less stressful in the Ford.

The 4xe electric drivetrain adds $8,500 to the Wrangler’s price tag, but that is almost offset by the $7,500 federal tax rebate for the vehicle. The remaining $1,000 surcharge could be made up for in fuel savings. But if not, the experience of trundling silently through the forest is priceless.