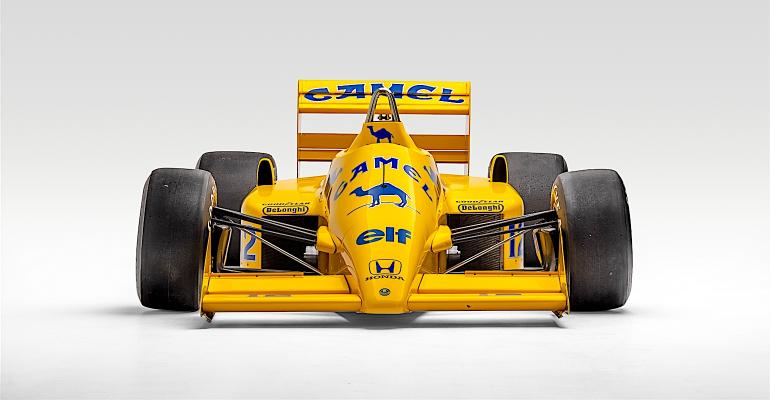 Start Slideshow ›
Here's your chance to see 35 years of F1 progress in one place.

While most Formula 1 fans must satisfy themselves with collecting Hot Wheels or Matchbox versions of their favorite racers, or with meticulously assembly scale models, Juan Gonzalez, Chairman of the Board of Mission Foods, has the good fortune to be able to collect the real thing.

What’s the good of having such fantastic toys without a chance to show them off to your friends? In Gonzalez’s case, “friends” include like-minded enthusiasts who visit the Petersen Automotive Museum in Los Angeles.

Related: Check Out All 21 Switches on the Mercedes-AMG F1 Steering Wheel

Gonzalez’s Mission Foods is a McLaren sponsor, so it is unsurprising to see many McLarens in the collection. “Since the 1970s, I have felt passionate about (team founder) Bruce McLaren’s story,” Gonzalez explained. “How he began as a racer, then he built and developed his own car factory and race team, designing and developing Can-Am and F1 race cars.”

The selection of these specific purchases came down to a blend of their drivers’ history and the team’s success, along with technically interesting aspects of the car’s design, Gonzalez said. Plus, there’s plain old fan boy enthusiasm at work. “The F1 drivers that I consider my heroes are Ayrton Senna, Michael Schumacher, Mika Häkkinen, Fernando Alonso, Alain Prost, Lewis Hamilton, and Jenson Button,” he explained. All of them but Prost are represented by the cars in this exhibit.

As for the cars themselves, Gonzalez insists that he doesn’t have a favorite, but when pressed admits to putting Ayrton Senna’s bright yellow 1987 Lotus atop his personal list.

One common attribute of these cars from the past 35 years is that they are very narrow, to minimize aerodynamic drag. That’s fine for the young guns who raced them at the time, but isn’t great for older gentleman racers today, so Gonzalez admits that he’s never been able to drive any of these cars because he can’t fit into their cockpits.

No matter, he still has older, roomier cars that he can drive, including a 1973 Shadow DM1. “It is an incredible experience to have the opportunity to drive an F1 car,” he noted. We will have to settle for ogling Gonzalez’s cars rather than driving them. Visit The Petersen Automotive Museum by June 5, 2022 for a chance to see these beauties in person.