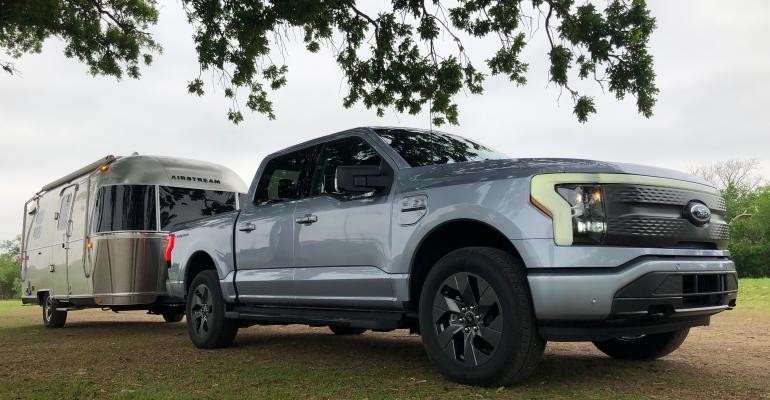 Start Slideshow ›
2022 Ford F-150 Lightning towing an Airstream trailer.
We finally got to drive Ford's hotly-anticipated F-150 Lightning electric pickup truck, and the bad news is that they won't be able to build them fast enough.

The electrification of Ford’s F-150 pickup truck, in the form of the F-150 Lightning, is a watershed moment for the auto industry, as the best-selling vehicle in the U.S. now comes in battery-electric form.

Two days behind the wheel of Lightnings in various situations, including highway driving, towing, and off-roading, reveal a truck that is better than its combustion-powered sibling in so many ways that the Lightning is sure to pile up backorders like the Sony PlayStation 5.

Ford holds 200,000 orders for the Lightning and is on a trajectory to reach an annual production capacity of 150,000 of the trucks by 2023, so anyone ordering one now will likely face a two-year wait.

Often splashy new vehicles rack up impressive numbers of orders, but many of those orders are ultimately canceled and the buyers’ deposits refunded. That seems unlikely to happen in the case of the Lightning, judging from the excellence of the truck while performing the variety of tasks truck owners require.

To do this, Ford designed a conventional truck frame. The massive dual-layer battery bolts into the frame with isolation mounts in the style of the battery used previously on the F-150 hybrid-electric. This is in contrast to vehicles that integrate the battery box into the chassis so that it contributes to rigidity.

The standard-range battery is 98 kilowatt-hours and the extended-range pack is 131 kWh. The cells are flat pouch-style cells like the ones in the Mustang Mach-E, supplied by SK Battery America’s Commerce, Georgia plant. A unique feature of this pack is a cooling system that kicks into overdrive with two chillers when the Lightning is in Tow/Haul driving mode so that the cells don’t overheat when the truck is working hard.

The Lightning’s rear suspension does not borrow from the Raptor’s but replacing the solid axle with independent suspension still brought its share of added work, according to chief engineer Linda Zhang. The team assigned with the task told her that it would be a simple change, saying, “All we have to do is get rid of the spare tire,” she said.

But pickup truck drivers expect to have a spare tire and one that they can get to with reasonable convenience without it taking cargo space in the bed. “We want both [the IRS and the spare tire],” Zhang responded. “So, they went back to the drawing board.”

Some challenges fitting it in included interfering with the suspension mounts, bumping into the hitch, and presenting a threat to the rear electric motor in the event the truck is rear-ended by another vehicle in a collision. They addressed these problems by using gigantic lower control arms on the suspension that mount forward of the axle, by shifting frame crossmembers upward to leave space beneath for the tire, and by installing a deflector between the tire and the rear motor that will push the tire down and away from the motor in a crash.

The truck’s trip computer predicted a range of 230 miles for the extended-range pack while towing an Airstream camper, but the rate of depletion that we saw extrapolated to 150 miles of range. The truck’s computer showed 1.3 miles per kilowatt-hour of consumption, which correlates to 170 miles of driving range for 131 kWh of energy, so somewhere in the 150 to 170-mile range seems realistic.

The extended-range model can sprint to 60 mph in 4.5 seconds, while the standard truck reaches that speed in 5.0 seconds. We didn’t time it with the trailer, but rolling down an on-ramp onto the Interstate, flooring the accelerator caused the truck to surge forward hard enough to squeal the tires and it whooshed effortlessly to merge with the 70 mph traffic.

For off-road driving, we found the Lightning impressively capable, considering that it is not an off-road-oriented model. Its all-wheel-drive, rear electronically locking differential, and Off-Road driving mode let the truck crawl confidently through mud holes and up steep, rutted trails. As we experienced previously with the Jeep Wrangler 4xe, driving off-road on electric power is relaxing, with none of the noise and heat of a combustion engine, letting the Lightning’s occupants enjoy the sounds of nature.

Those occupants who are in the rear seat are well cared for. Pickup truck rear seats tend to be uncomfortably upright, but in addition to the acres of legroom, the Lightning’s rear seats also give the occupants just enough recline angle on the back to keep the seats comfortable even on longer drives.

Commercial truck buyers can get a Lightning Pro for $41,669 with the standard-range battery. Our second-from-the-top trim level Lightning Lariat’s base price was $67,474, and the as-tested price was $81,384, including the extended-range battery, Max Tow Package, and spray-in bed liner. These prices are steep, but early buyers will benefit from the available $7,500 federal tax credit.

Buyers seem more concerned with availability than price, however, and it looks like the Lightning will be hard to come by for at least a year or two.