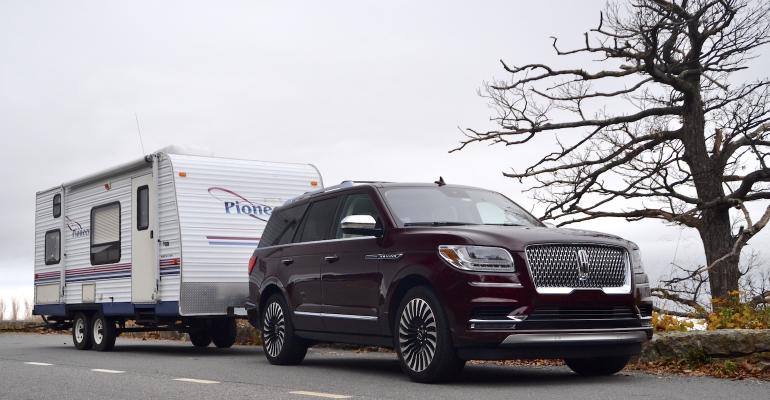 2020 Lincoln Navigator
More people are headed to the great outdoors during the pandemic, and the Ford Pro system for helping them back up their camper will make life easier when they get there.

Interest in campers has accelerated during the pandemic, as consumers rate camping as safer than other travel destinations, according to a survey by the Cairn Consulting Group for Kampgrounds of America.

If this means that maybe some people who are unfamiliar with towing a camper may decide to take up the activity, Ford is here to help, with its Pro Trailer Backup Assist technology. Our 2020 Lincoln Navigator featured this technology as part of its heavy-duty towing package, which also includes the integrated trailer brake controller, automatic trailer sway control, and load-leveling air suspension to keep the camper (and SUV) on an even keel.

The big $100,000 Lincoln is plush as you’d expect for its price tag, but it is burley too, with a 450-horsepower 3.5-liter twin-turbocharged EcoBoost V6 engine matched to a 10-speed automatic transmission. Carmakers are moving to many-speed transmissions to optimize the efficiency of modern direct-injected, turbocharged engines, which are most efficient when operated within a narrow rpm band.

We found an added benefit of having so many gears is that when the Navigator automatically switches to “tow/haul” mode when you plug in the trailer lights and brake connector, the truck’s aggressive engine-braking downshifts on downhills are seamless as it changes through the closely-spaced gears. It feels like driving into axle-deep sand, as the Navigator just slows down without having to tax its brakes.

The EPA says that the Navigator will return 16 mpg in city driving and 21 mpg on the highway, thanks in part to that transmission, with an 18 mpg average. Towing the 18-foot double-axle Fleetwood camper that we used for the test, it got half that, illustrating the fact that turbo engines get thirstier than conventional ones when they are in harness and doing hard work.

To use Pro Trailer Backup Assist, we first had to set up the Navigator’s system. This requires making some measurements of the distance from the tow vehicle’s rear bumper to its axles, the trailer’s length, and a few other measurements. You apply a checkered flag sticker to the trailer tongue to serve as a target for the system to watch through the backup camera, so it can detect the trailer’s direction. 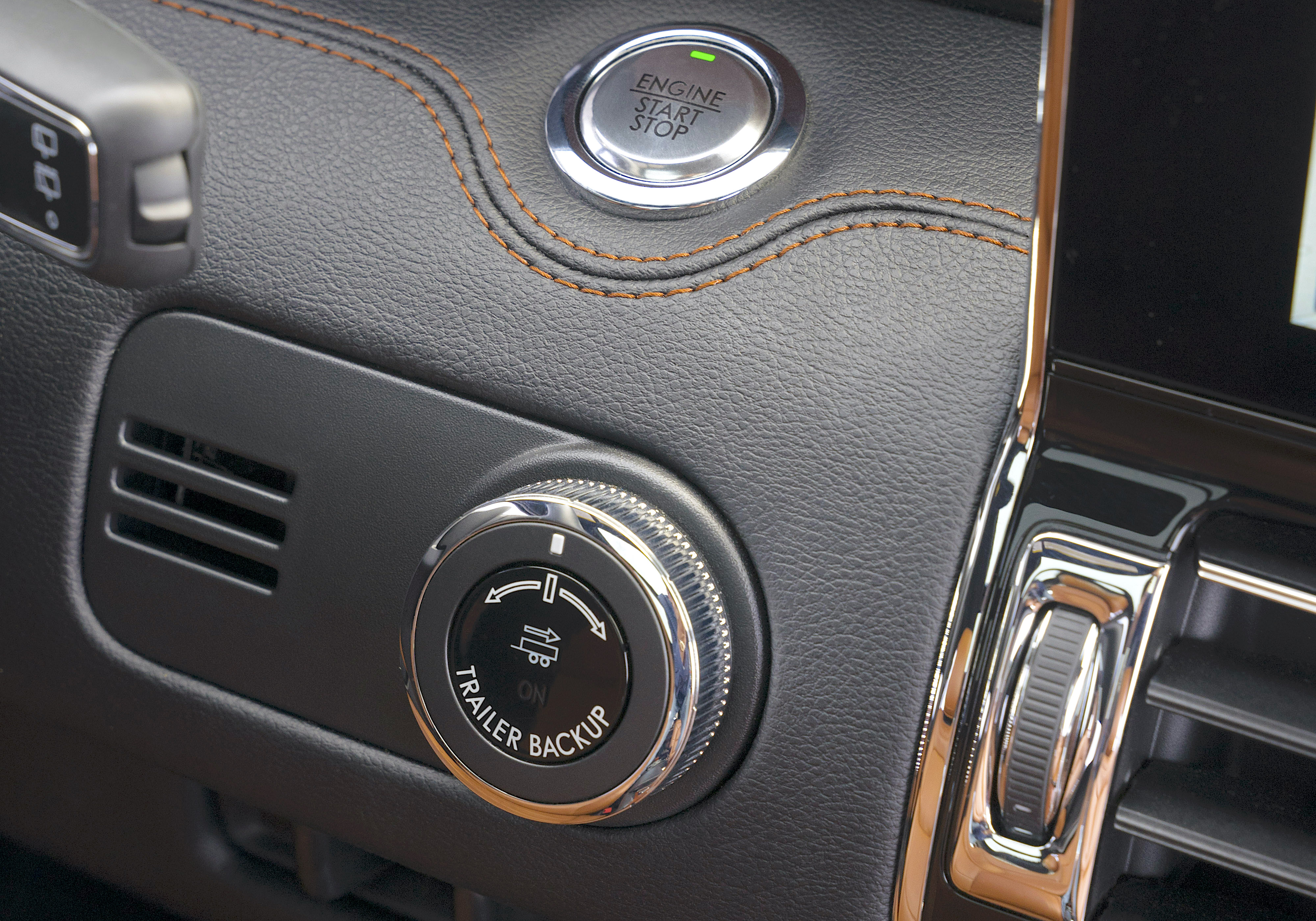 With the system calibrated, the driver uses a dial knob on the dashboard as a virtual trailer steering wheel when backing, while operating the gas and brake as normal. This makes it easier for inexperienced trailer-towers to place the trailer where they want it with confidence. 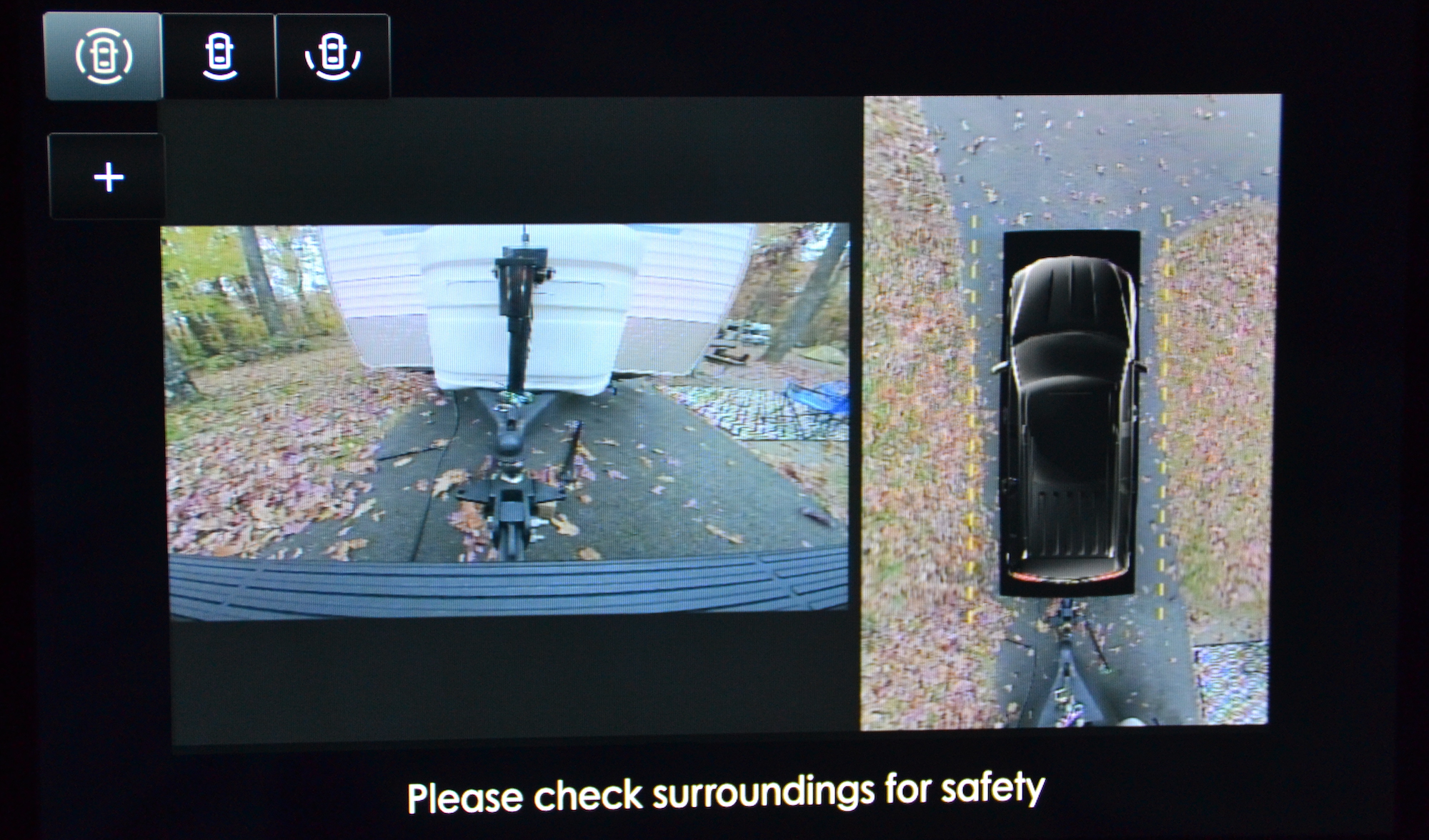 The backup camera view of the trailer hitch.

We found the system easy to use. It would be especially beneficial when backing a long distance, because not only does the system let the driver steer the trailer with the knob, but it also maintains the trailer in a straight line when there is no input. This means the trailer can’t suddenly swerve sideways and jackknife while backing, which makes backing up a long distance easy.

“The straight backing functionality really helps people,” Mattern says. “It takes real effort to back in a straight line because it is a naturally unstable system,” he continues. “It is like an upside-down pendulum.” 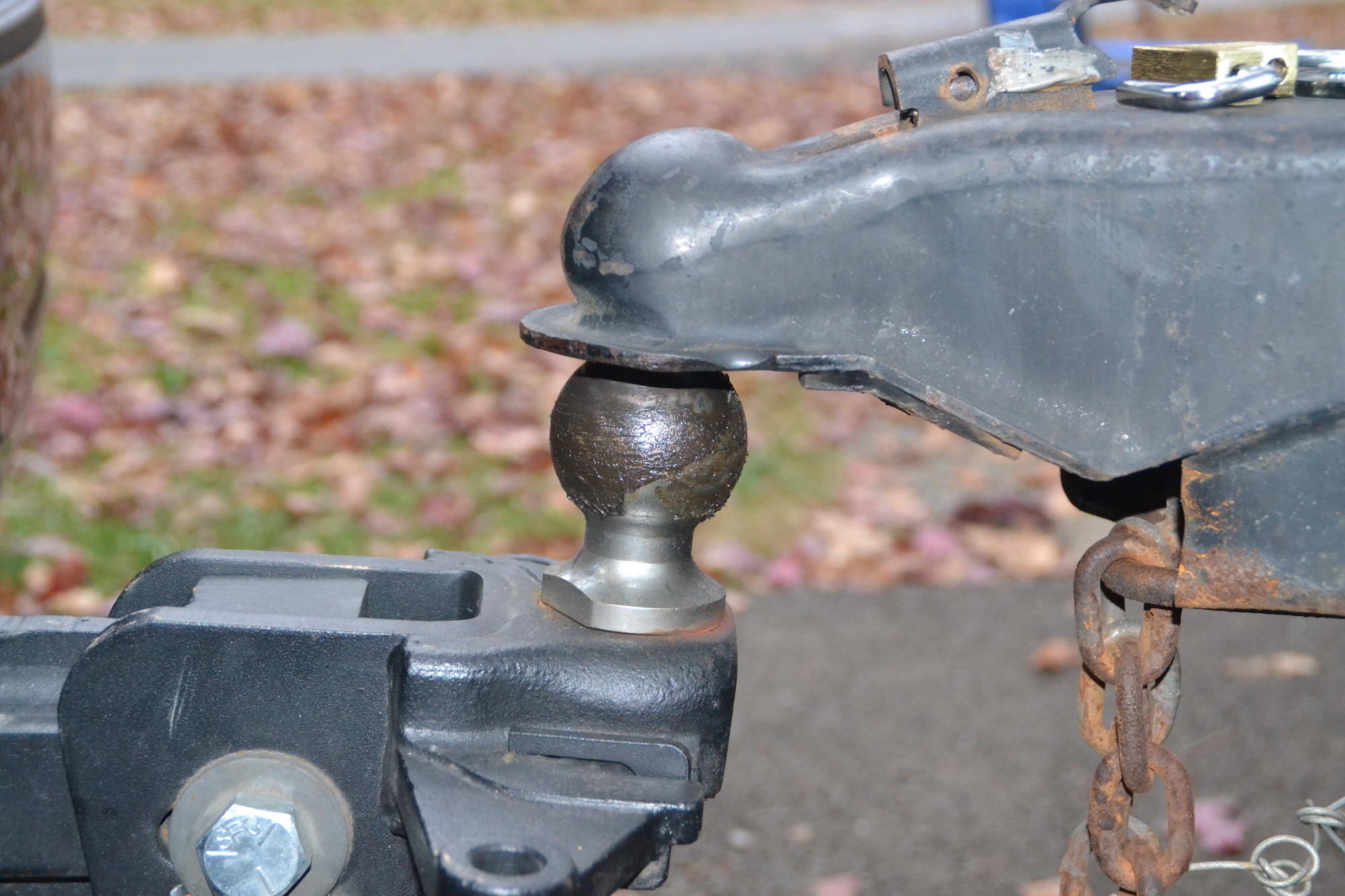 The backup camera system let us place the Navigator's tow ball directly beneath the hitch unassisted on the first try.

But with Pro Trailer Backup Assist providing stability, it is possible to back long distances at surprising speed, as Mattern and a colleague proved by racing each other at the Ford proving grounds. “I wonder how long it will take to do the ride and handling track backward?” one of them mused, and the next thing they were out on the track to find out.

“He beat me,” conceded Mattern, “but it was cool to do that whole maneuver.”

Ford partnered with Magna to develop the Pro Trailer Backup Assist system we experienced on the Navigator, but the company has developed its own successor to that system. Version 2.0 debuts with the 2021 F-150 pickup truck and it does the calibration automatically after the driver applies the target sticker to the trailer.

“We knew that was a pain point for customers,” Mattern acknowledged. “Now all the measurements are gone and the trailer length estimation.”

Once the sticker is in place, simply driving to your destination should be enough for it to calibrate so it can help you back the trailer into its space or campsite.

Our rented camper’s weight distributing hitch was set up for a vehicle with a lower receiver for the drawbar, which made the trailer slightly higher in the front than we’d have liked. This destabilizes trailers, but we found that as long as we maintained appropriate speeds the camper followed the Navigator as expected. Still, it was nice to know that if a wind blast from a passing tractor-trailer upset things that the Navigator’s sway control system has the ability to clamp onto individual brakes to bring everything back into line.

The integrated trailer brake system works invisibly as only such built-in brake controllers can. This is a contrast to the aftermarket add-on controllers that inevitably brake too harshly at low speeds and too little when making a hard stop from highway speeds when encountering a sudden backup or some crazy person pulls into the lane directly ahead.

The backup camera system features a reticular crosshair to aid in backing the Navigator up to the trailer, letting us place the ball directly beneath the hitch on the first try.

All of this should provide first-time camping trailer users the confidence to pull, and back, their trailers like, well, if not like pros, at least with some competence and safety. And when the new F-150 hits the streets, we’ll have an even better system to use next year.