Ford Innovated the Assembly Line 100 Years Ago. Now, Ford has a Better Idea 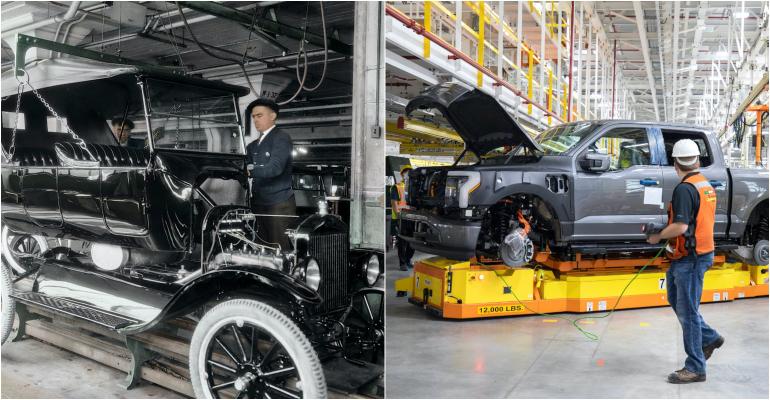 Start Slideshow ›
A 1923 Model T receives its body on a moving assembly line (left), while a pre-production F-150 Lightning scoots through the plant on an automated guided carrier (right).
The moving assembly line was the productivity key that launched the Ford Model T to becoming the world’s best-selling car, but now Ford has a new manufacturing plan.

In recognition of the National Association of Manufacturers’ Manufacturing Day 2021, let’s take a look at more than a century of advances in automotive manufacturing at Ford Motor Co.

Ford founder Henry Ford is often popularly credited with inventing the mass production moving assembly line. He didn’t, but the company exploited and popularized this advance in manufacturing efficiency to make the Model T a mass-produced commodity rather than a hand-built luxury.


Related: 14 Videos That Break Down the Amazing Engineering of the 2022 Ford Lightning

The slow old way of building cars involved car bodies being delivered by horse-drawn carriage and teams of workers assembling each automobile atop sawhorses. These teams of workers would rotate from one station to another to bring the vehicle together. The logistics of bringing in more parts to complete each car was a headache and late parts delivery caused pile-ups of workers contending for space.

J.J. Seaton wrote in Harper’s Weekly in January 1910 that “the man who can successfully solve this knotty question and produce a car that will be entirely sufficient mechanically, and whose price will be within the reach of millions who cannot yet afford automobiles, will not only grow rich but will be considered a public benefactor.”

Ford studied other industries’ practices, looking at brewing, canning, and steel manufacturing to get ideas on the best way to build cars. On Oct. 7, 1913, Henry Ford became the person to meet Seaton’s challenge, and it marked the beginning of a new era in automotive manufacturing. Ford’s Model T was intended to be a car anyone could afford, but until it was constructed by mass production on a moving assembly line, even this modest car remained beyond the means of most people.

On that first day, Ford’s team rigged a rudimentary final assembly line at the Highland Park Assembly plant. They rigged a rope with a winch that dragged cars along a 150-foot assembly line, where 140 workers swarmed the passing cars to assemble them. This rigged system was replaced by a permanent chain-driven assembly line in 1914.

Worker hours of final assembly dropped from more than 12 hours under the stationary assembly system to fewer than three. By 1924, a Model T required only 1.5 worker hours to complete. As a result, production soared and costs plummeted. In 1912, Ford produced 82,388 Model Ts and the touring car sold for $600. By 1916, Model T production had risen to 585,388, and the price had dropped to $360.

Today, carmakers like Ford are moving away from traditional assembly lines, and to conveyances that are reminiscent of the carts that carried early cars around assembly plants.

Corey Williams, plant manager at Ford’s Dearborn Truck Plant described the new Rouge Electric Vehicle Center plant for the F-150 Lightning. “The [plant’s] interior will look much different than its next-door neighbor, Dearborn Truck Plant,” he said. “There won’t be any conveyors on the plant floor. Instead, automated guided carriers will move the vehicles from workstation to workstation like a well-choreographed ballet.”

These dancing carriers provide greater flexibility than the traditional steel assembly line conveyor systems, Williams explained. “The great thing about this is our flexibility in production. When customer demand goes up, we can flex our production with these automated guided carriers and we don’t have to physically take a conveyance line and move it.”

Ford is spending nearly $1 billion on the Rouge Electric Vehicle Center to create a manufacturing home for the F-150 Lightning. Only time will tell whether this factory’s opening will be a watershed, like installing the moving assembly line in the Highland Park plant was in 1913.