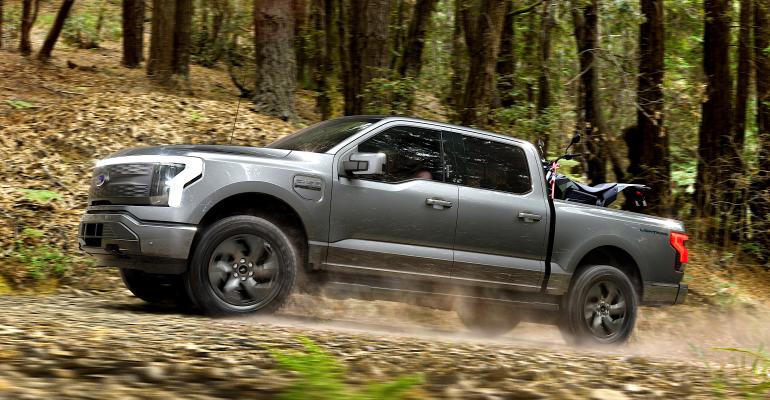 2022 F-150 Lightning
The Lightning’s delivery of the necessary capabilities at an accessible price could open the EV floodgates.

Ford’s announcement of the battery-electric 2022 F-150 Lightning pickup truck potentially marks the same kind of industry watershed moment as when the company shifted Model T production to a moving assembly line in 1913.

The Model T had been in production for five years when Henry Ford streamlined its assembly process and reduced the car’s cost, making it accessible to middle class buyers. Electric vehicles have been gaining in market share and capability in recent years, but the introduction of a battery electric version of the vehicle that has been America’s most popular pickup truck for 44 years indicates a shift from EVs being a market niche to being mainstream.

Price is as important now as it was with the Model T, so Ford’s announcement that the F-150 Lightning’s price for base commercial-grade models will start at $39,974 and that popular consumer trim level XLT trucks will start at $52,974 demonstrates that the truck will be accessible, as those prices fall in line with today’s average purchase price for pickups.

“We’re not here to make an electric truck for the few,” confirmed, Ford president of the Americas and International Markets Group, Kumar Galhotra. “Ford is committed to building one that solves real problems for real people,” he said. “F-150 Lightning delivers everything we’ve said electric vehicles can offer, plus the capability expected from a Built Ford Tough truck; not just near instant torque but powerful towing and hauling customers can depend on.”

That’s because trucks have to work like trucks, no matter their power source, and the F-150 Lightning delivers with a predicted 563 horsepower and a staggering 775 lb.-ft. of torque. The standard lithium-ion battery pack will deliver a driving range of 230 miles and the optional extended-range pack will take the truck 300 miles.

Ford has not yet finalized the exact capacity of those batteries in kilowatt-hours, so we’ll have to wait to learn those details. But we can infer from the company’s claims regarding the truck’s backup power capacity that the extended-range pack is approximately 90 kWh, which would put the standard pack in the 70 kWh range. 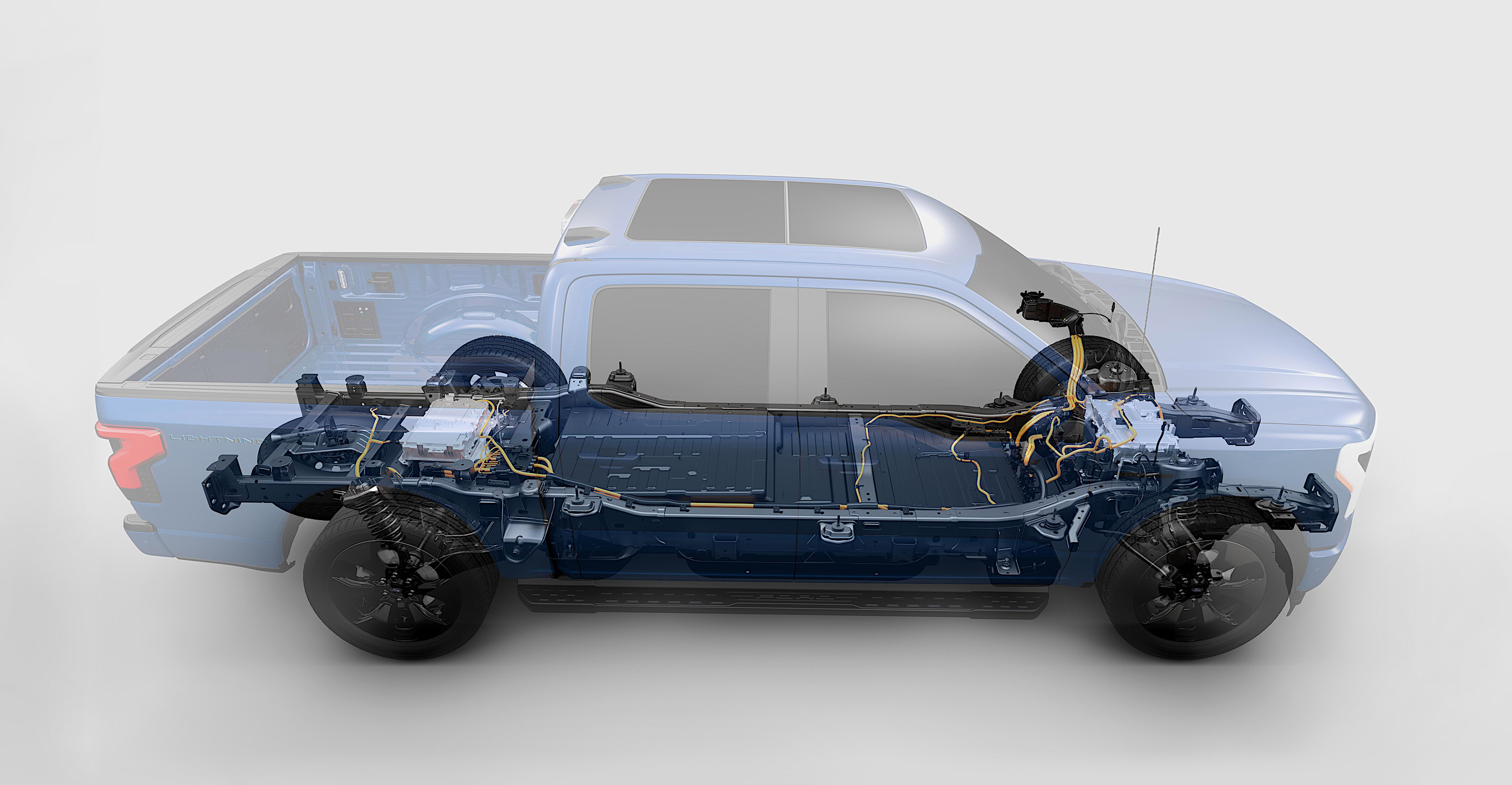 All Lightnings will have front and rear electric motors providing full-time all-wheel drive, suggesting the potential for eventual cheaper two-wheel-drive versions. The standard battery pack version of the truck has a payload capacity of 2,000 lbs., while the extended range battery-equipped model can carry 1,700 lbs. because of the added weight of its batteries.

The maximum trailer towing capacity is 10,000 lbs. for Lightnings with the XLT or Lariat trim package, extended-range battery, and the optional Max Trailer Tow package. Acceleration times aren’t a common pickup truck performance metric, but they are commonly cited in EVs because of the strong acceleration electric drivetrains deliver. 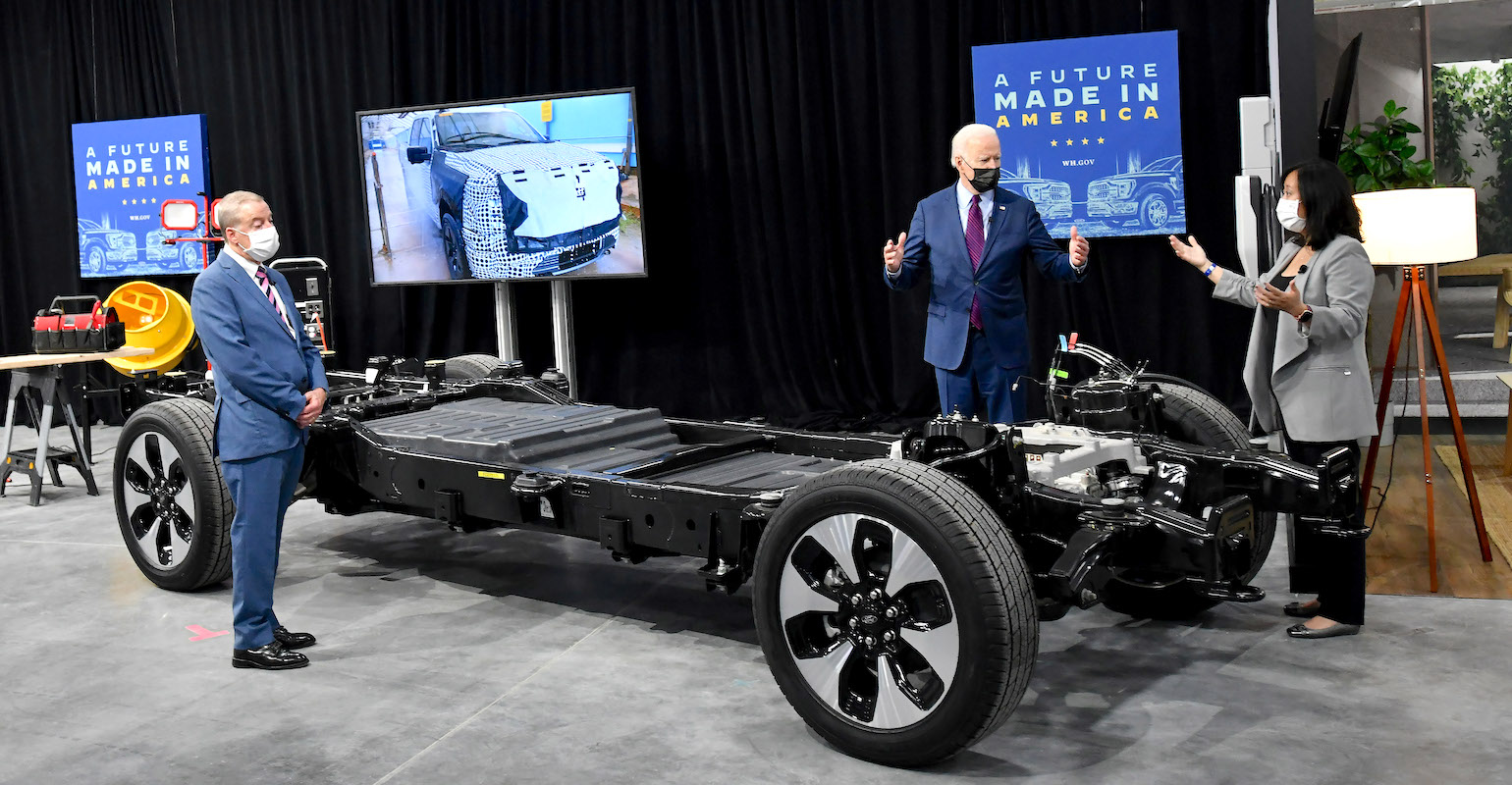 Ford claims “mid-4-second” 0 to 60 mph acceleration for the Lightning. But in a media event with President Biden at the Ford proving grounds the day before the Lightning reveal, Biden revealed that he’d done “4.3, 4.4-second” time during his drive. That’s quicker than Ford’s F-150 Raptor performance truck, and like the Raptor, the Lightning enjoys an independent rear suspension system like the one discussed in the Engineering Solutions podcast.

The electric drivetrain lets the Lightning deliver other benefits that the gas truck cannot, such as the ability to provide 9.6 kilowatts of emergency back-up power to homes in the event of a power outage. 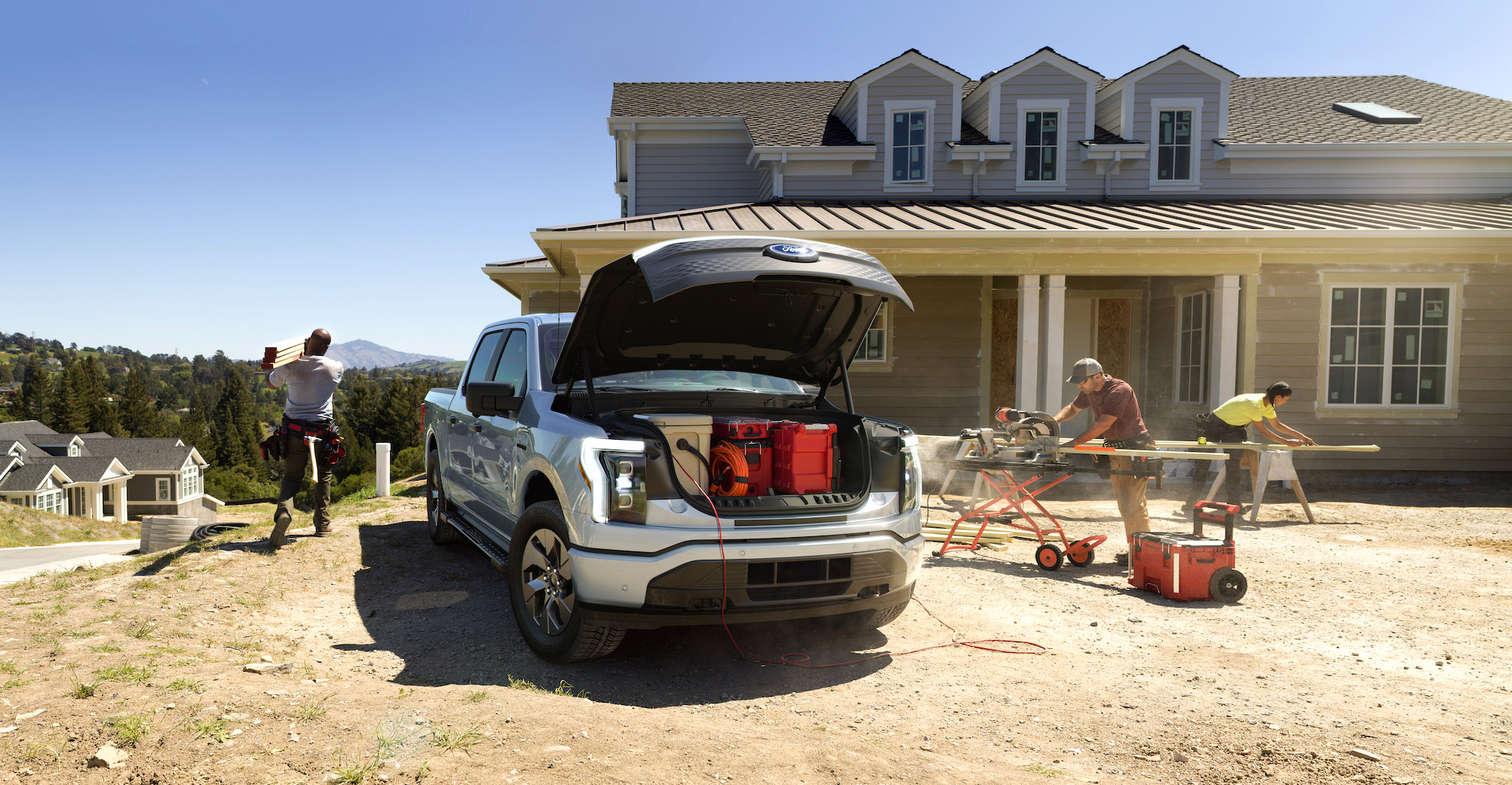 “Whether sheltering during a storm or trying to stay safe in a heat wave, customers can now use their truck to give themselves power when they need it most,” said Ryan O’Gorman, electric vehicle manager, Strategic Partnerships. “F-150 Lightning is built for seamless transitions between charging your vehicle and powering your house when needed – and Ford is the first in the U.S. to offer this capability on an electric truck.”

If the home consumes 30 kWh per day, the extended range battery pack will last three days, according to Ford, and if the household switches to power rationing to keep refrigerated food from spoiling, the truck can run the house for as many as ten days. 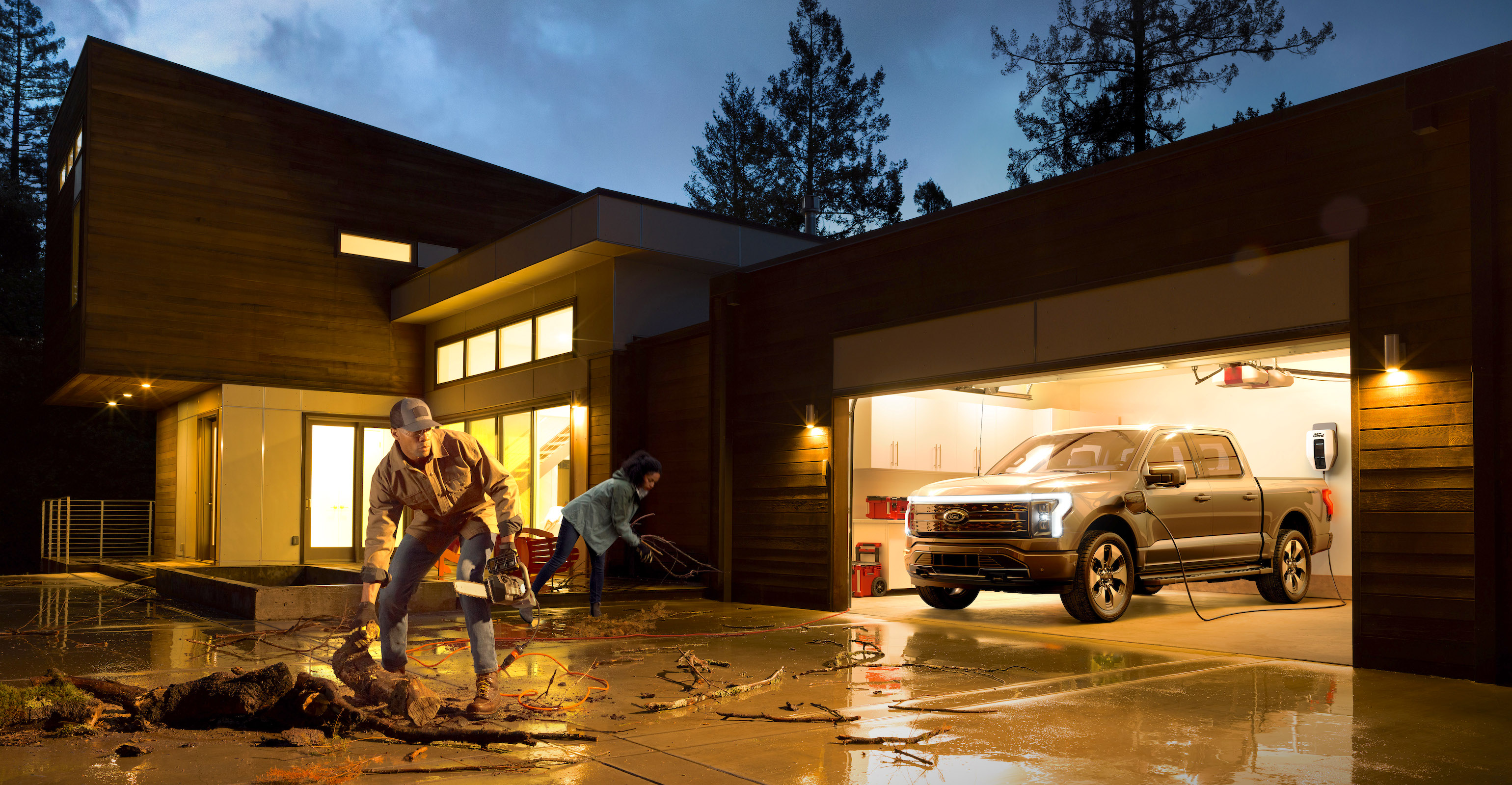 The lights stay on during a storm thanks to the Lightning's emergency backup power.

Another capability that is unique to the electric truck is the ability to haul secure cargo in a front trunk under the hood, where there is no engine. The Lighting’s “frunk” can carry 400 lbs. of cargo inside its 400-liter volume. That space is watertight and has a drain, so it can be packed with ice to serve as a cooler for tailgate parties. It also contains 2.4-kW electric power outlets to run appliances, entertainment systems, and tools.

“The words ‘front trunk’ doesn’t even begin to describe all the innovation and capability Ford packed into this high-powered space,” said Nancy Reppenhagen, supervisor, Global Feature Process. “It will have customers rethinking what their truck is capable of and enable the kinds of experiences they never would have thought possible before.”

These are the kinds of bonus experiences that can tip the decision toward an EV purchase. But that decision point is only possible once the fundamental performance and price targets have been achieved in a vehicle that consumers want. With those requirements apparently satisfied, the F-150 Lightning looks poised to spark the mainstream shift to EV power in the U.S. Ford is promising delivery in the spring of 2022. 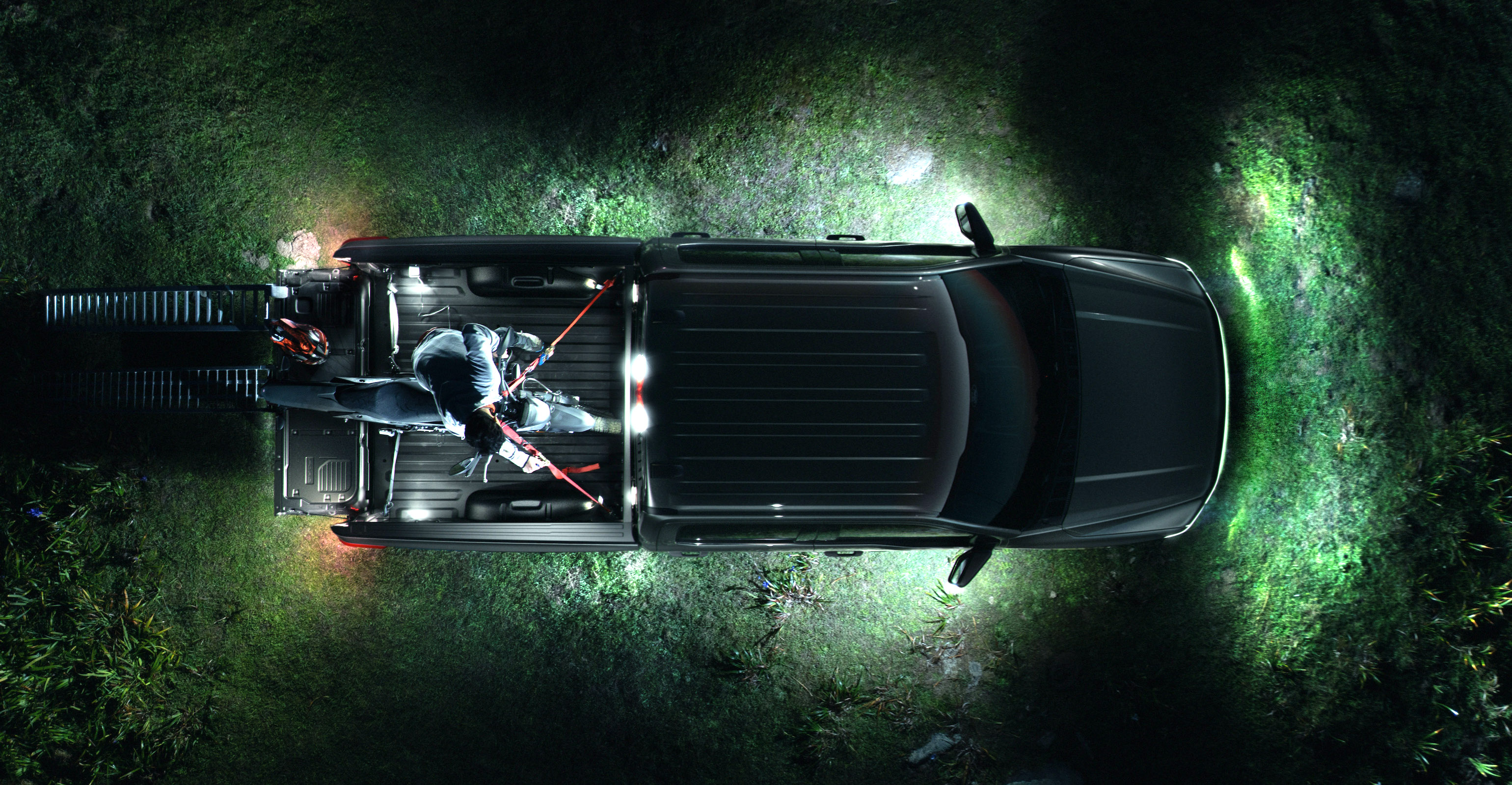