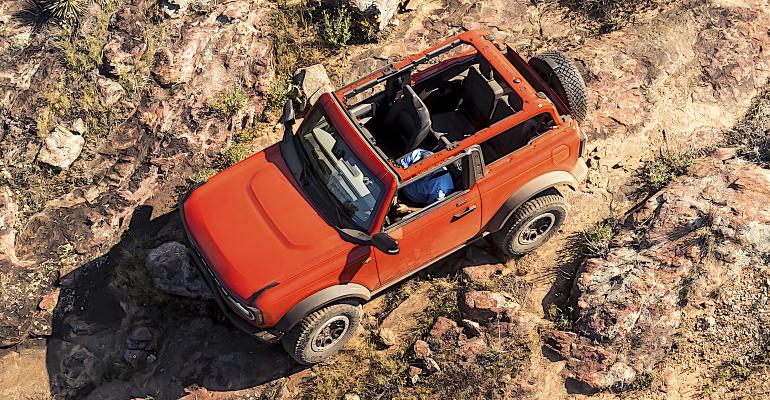 Ford engineers knew that they'd have to pull out all the stops to take on the Jeep Wrangler.

The original press release for the 1966 Ford Bronco employed the first documented use of the term “sport utility vehicle,” demonstrating that Ford’s roots in the category run deep. But there was good reason for Ford to coin the ungainly term: off-road vehicles were then known generically as “Jeeps,” even if the vehicle in question was an International Harvester Scout or a Ford Bronco.

The Bronco left showrooms in 1994, but it returns to world where Jeep is stronger than ever. May was the strongest sales month in history for the Wrangler, as post-pandemic drivers sought the quickest way to head to the boondocks.

The only hope for a challenger to such an entrenched incumbent is to outsmart the reigning champion. Ford engineers have tried to do that by analyzing details few of us may have considered to produce solutions to problems that we might have been vaguely aware of at best.

Consider the winch. The front bumper-mounted electric motor provides an insurance policy that the vehicle can extract itself from any mess an overly optimistic driver might have gotten it into. Warn Winches are the industry standard and 4x4 buyers like to dress their vehicles with them whether they actually use them in the bush or not.

Here’s the thing: if you’re commuting to work in your burly off-roader and crash into something with a big hunk of electric motor and steel cable bolted to the front bumper, it dramatically changes the impact pulse that passes through the vehicle. Airbag deployment depends on recognizing the impact and reacting accordingly.

So Ford engineers have devised a calibration for crashes both with and without the optional winch. If drivers have it installed by their dealer, the technician re-flashes the computer with the “winch” version of the calibration so that, in case of a crash, the airbags will deploy appropriately.

Vehicles like the Bronco and Wrangler that have removeable doors are not required to pass government side-impact tests, but Ford resolved that the Bronco would do so. As a result, Bronco has more airbags than Wrangler that ensure the Bronco passes this test.

Like the Wrangler, the Bronco has removable doors, which provide for a wide-open driving experience and hugely improved outward visibility during trail driving. Bronco, however, has frameless windows so its doors are smaller. Ford has devised a packing system that lets owners stow the removed doors in the back of the vehicle, so people who lack a garage can remove the doors and have them securely stored.

The protective nylon bags Ford offers to cover the removed doors have a QR code image on them that links to a video depicting the correct packing procedure for stowing the doors in the back. 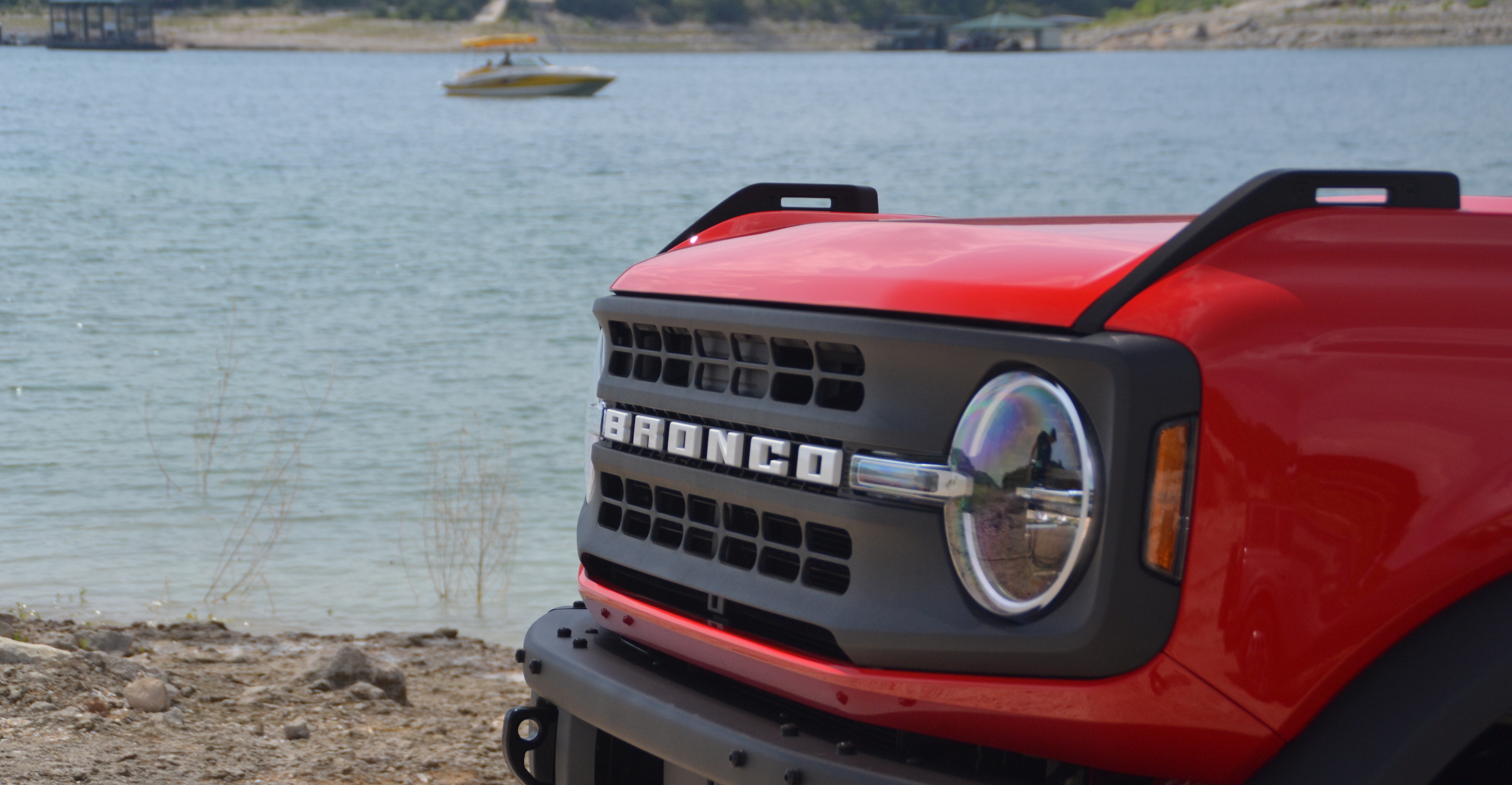 Shorter drivers strain to spot the front corners of 4x4s, so Ford added bolt-on fender markers to make the Bronco’s extremities more visible from the driver’s seat. These markers have holes and are reinforced so that they can serve as tie-down points for roof-mounted gear rather than routing tie-downs to the Bronco’s front tow hooks and causing the straps to abrade the leading edge of the hood.

Ford’s next-generation Sync4 infotainment system features a processor that is twice as fast as the old one. While a video system may seem superfluous on an off-roader, its ability to show the terrain ahead when making steep climbs when the driver sees only sky proves its worth.
Additionally, the FordPass Performance App is something of a Strava for Broncos, marking more than 1,000 curated off-road trails and recording the driver’s performance on those trails. It shows an additional 250,000 miles of uncurated trails for the more daring. In either case, the Bronco owner can post videos and telemetry recorded on those trails. 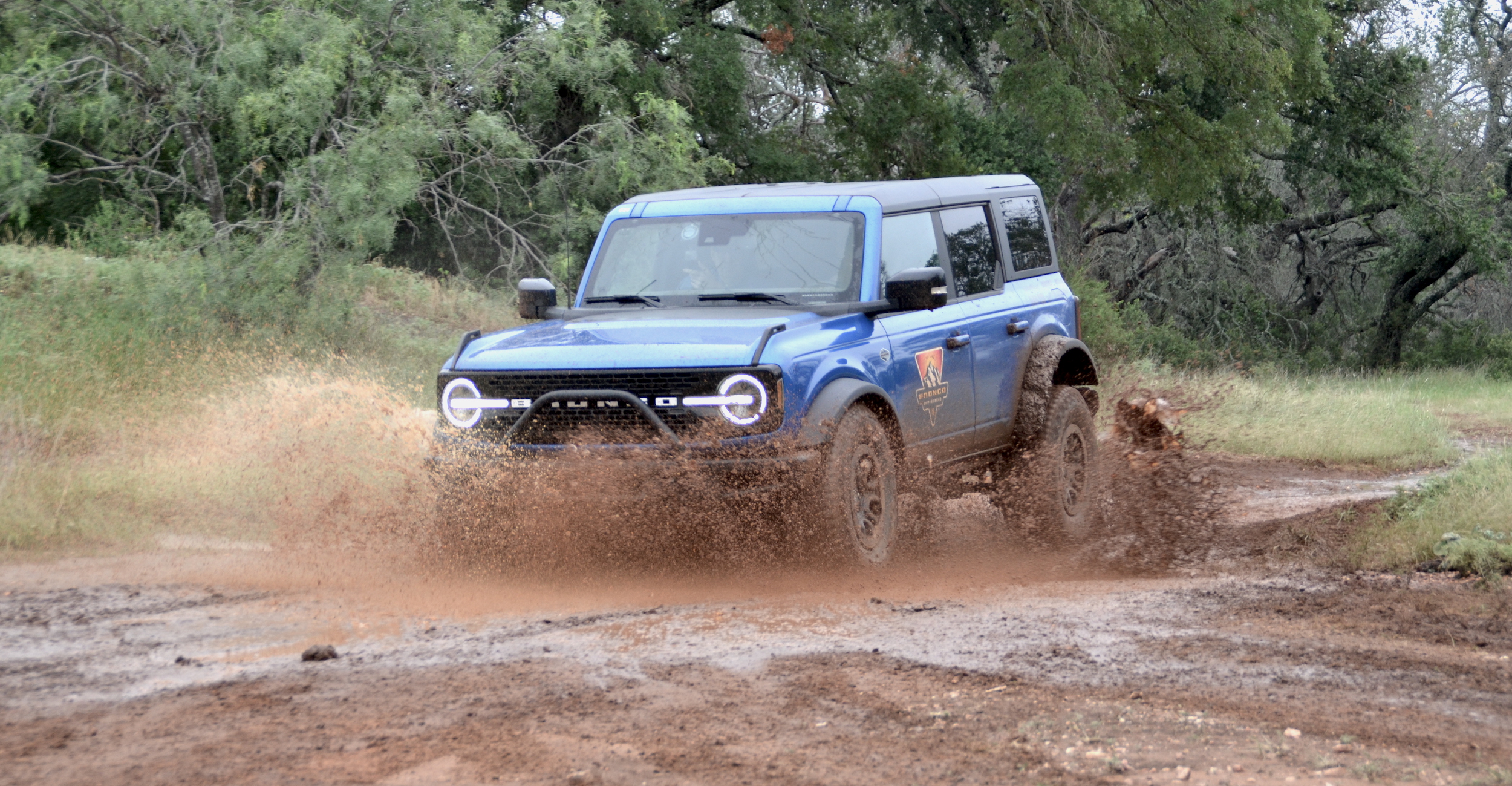 The highlights should be impressive because the Ford team worked just as hard providing the Bronco with maximum off-road capability through the available Sasquatch off-road package. That includes incredible hardware such as the Dana 44 AdvanTEK solid rear axle and Dana AdvanTEK independent front differential unit – both with available Spicer Performa-TraK electronic locking differentials – and equally critical software through the seven different driving modes of Bronco’s Terrain Management System. They are Normal, Eco, Sport, Slippery and Sand, with Baja, Mud/Ruts, and Rock Crawl for off-road driving.

The combination of magical software and enabling hardware produces miraculous results through features like Trail Control low-speed off-road cruise control, Trail Turn Assist, which locks the inside rear wheel on tight turns to navigate tough spots and One-Pedal Drive that relieves drivers of the need to keep their left foot over the brake pedal to make instant brake applications.

Driving a fully-loaded $63,210 Bronco First Edition 4-door with the smooth 315-horsepower turbocharged EcoBoost 2.7-liter V6 engine and 10-speed automatic transmission, we found that the Trail Control is not only handy in its hill descent control function when the computer automatically applies brakes and employs engine braking to maintain the Bronco’s speed in driver-selectable half-mile-per-hour increments, it also lets the Bronco chug effortlessly up steep hills too. 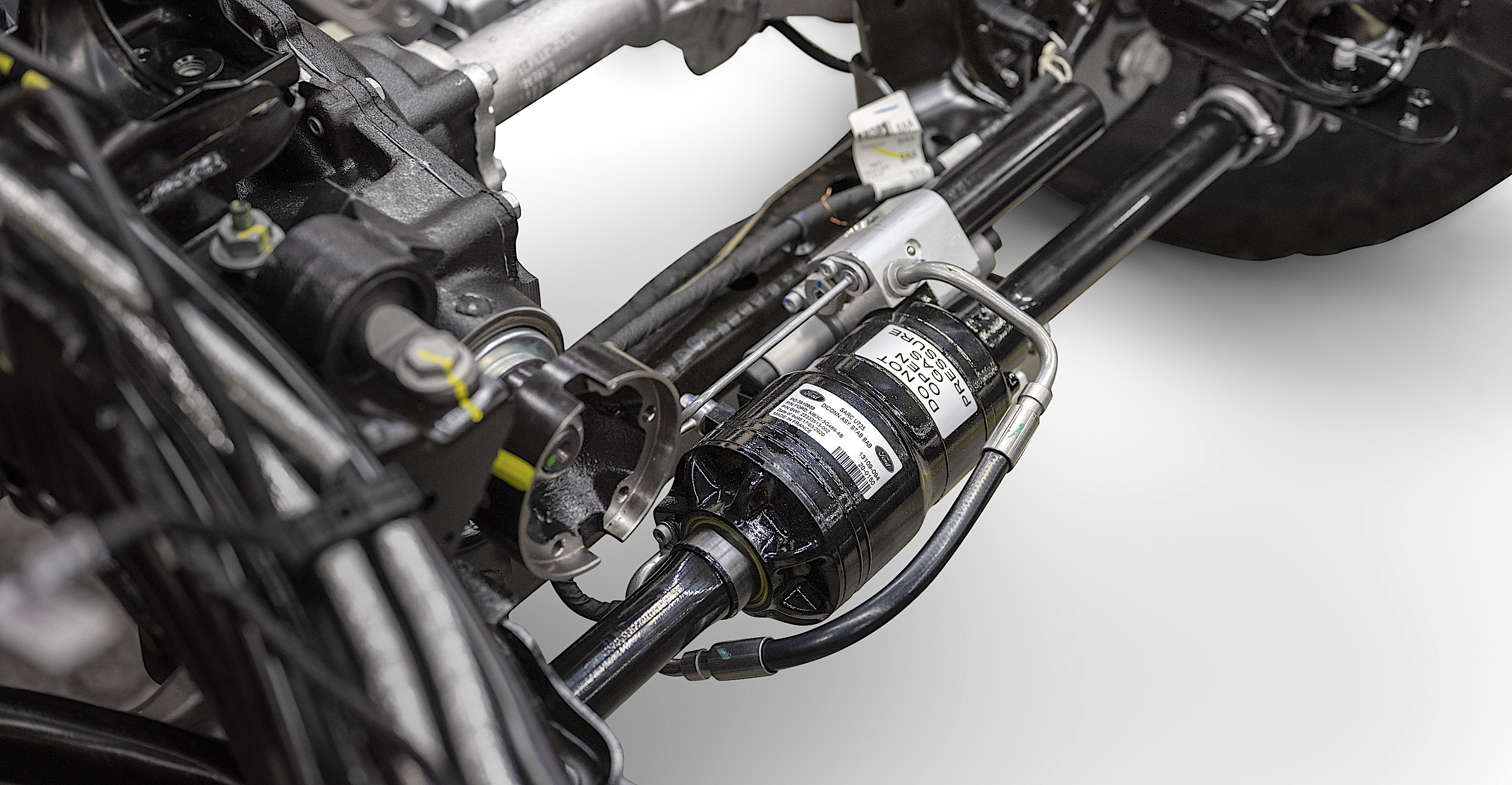 The Bronco's disconnectable anti-sway bar contributes to the vehicle's suspension articulation when driving off the road. It automatically re-connects at 20 mph for on-road stability.

Watching the Bronco ahead charge into tight turns and seeing the inside rear wheel lock-up to pivot the vehicle around the turn with a 40 percent reduced turning radius is an impressive demonstration of the Trail Turn Assist technology.

The One-Pedal drive applies to the aspect of off-roading that demands that vehicles climb down from obstacles gently, lest they crash their undercarriage onto rocks below. Normally drivers will keep their left foot at the ready. As the right foot applies the throttle to climb rocks and fallen trees, the right foot must stop the vehicle atop these obstacles and then lower them gently down the other side.

One-Pedal drive does this automatically as the driver press and releases the throttle pedal. Lifting off the gas entirely will brake the Bronco to a stop and it will stay there until the driver presses the accelerator down again. The system works great on trails, and it provides an abrupt reminder that it is still on if the driver forgets to switch it off, chirping the tires with sharp braking as the driver lifts off the gas pedal to slow slightly on the road.

Our on-road ride was a pretty $42,025 Race Red Black Diamond 2-door with the 275-hp 2.3-l four-cylinder. It rolled on 32-inch off-road tires whose balloon-like profile provides a surprisingly comfortable highway ride. However, the same deflection in those sidewalls that absorbs bumps also absorbs steering input, so the response to the steering wheel is sluggish and wobbly on twisty highways.

The other highway shortcoming is Bronco’s fuel efficiency. The EPA rating for the four-cylinder, 2-door Black diamond with automatic transmission is 18 mpg. That’s for both city and highway. Our test vehicle’s computer revealed that it was averaging 17 mpg and we got 16.7 mpg during a 75-mile highway drive. The V6 First Edition we drove off-road has an EPA rating of 17 mpg, also the same for both city and highway driving.

For comparison, a similar 2-door, turbo four-cylinder Wrangler is rated at 22 mpg city and 24 mpg highway.  A 4-door powered by a 271-hp naturally aspirated V6 scores 19 mpg city and 24 highway on the EPA test. So, while the Ford features engines boasting more advanced technical features, the Jeep is more efficient with its more traditional drivetrains. 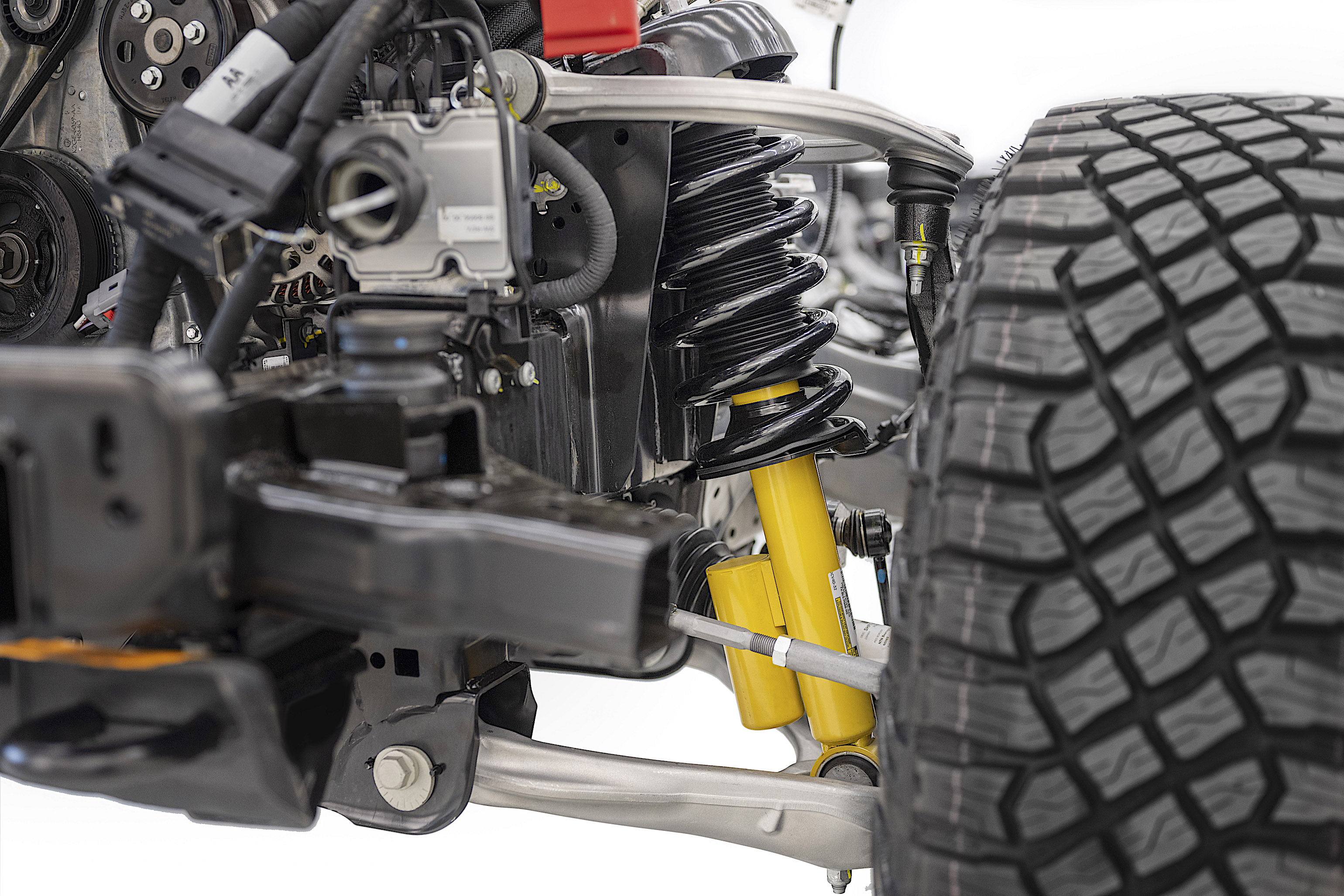 A Bronco advance that is demonstrably superior to the Wrangler is its independent front suspension. Traditionalists are certain that solid axles are a must for successful off-roading, but the Bronco’s smoother riding, better-handling independent front suspension system provides more articulation (the ability for the front wheels to extend and compress independently) than Wrangler’s solid axle setup. It also provides 11.6-inch ground clearance, as the differentials can be mounted higher and out of the way.

As the thirsty EcoBoost engine demonstrates, vaunted technology whose specifications look better is useless if it doesn’t actually deliver, and that was development engineer Gavin McGee’s task. “I’m given a hardware design constraint and durability requirements then a get the ride, steering, and handling capabilities,” he said.

The Bronco’s Bilstein shock absorbers are key to achieving these goals, McGee reported. “You want on-road character and off-road capability as well,” McGee said. Sometimes those are in opposite directions. “The Bilsteins separate that because they are not only tuneable for high-speed and low-speed damping, but also for displacement. If you hit a really big chuckhole hard, you get a lot of damping.”

One 4x4 condition that we weren’t able to test was the Bronco’s snow-going ability. With all the suitable hardware in place, snow prowess comes down to the use of snow tires and to the tuning of the Bronco’s software for Snow mode, McGee said. “The stability control team does a lot of work on snow,” he said. The results were so successful that the Bronco’s standard four-wheel-drive system proved unnecessary in testing. “In two-wheel-drive, it can go through the snow,” he said. 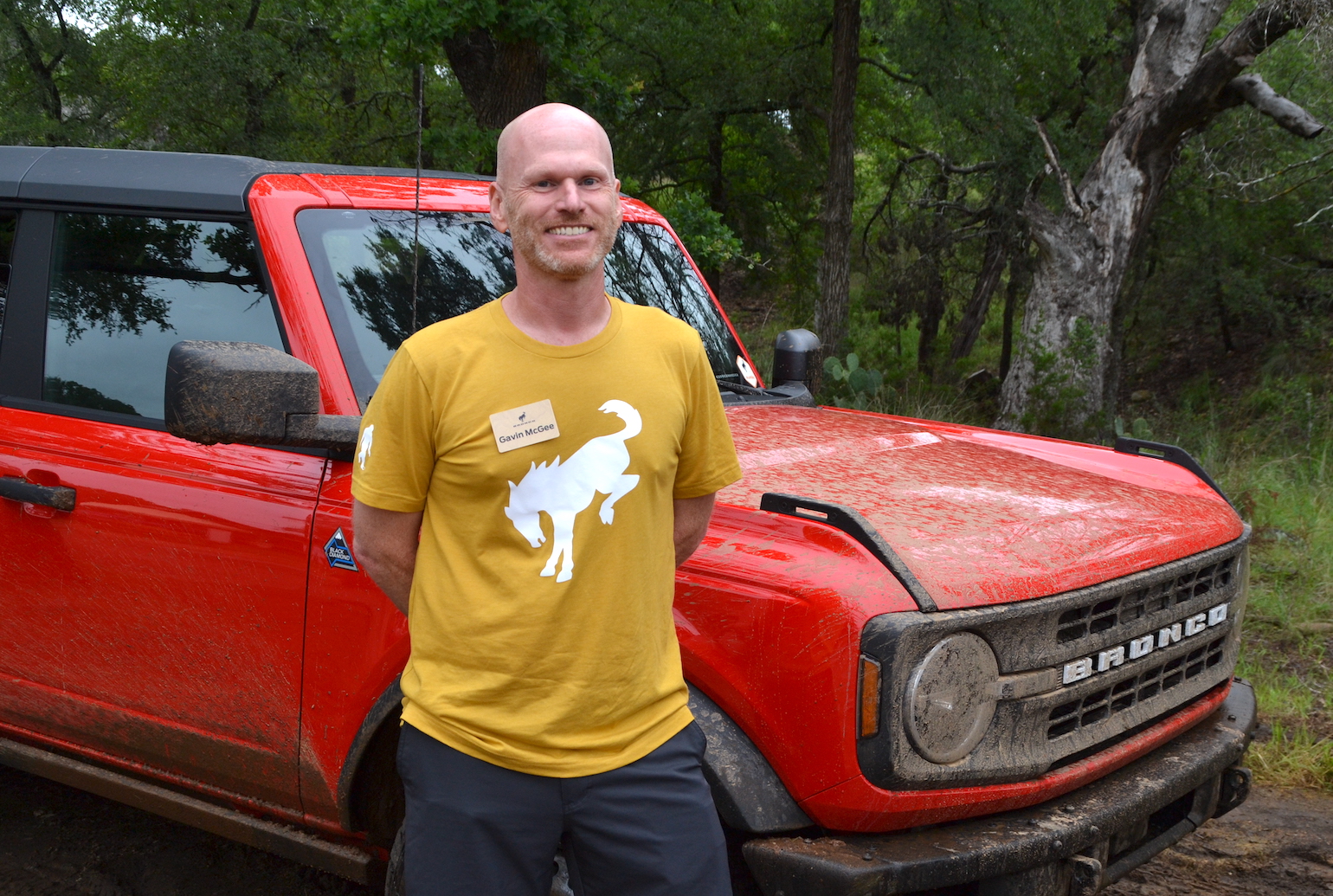