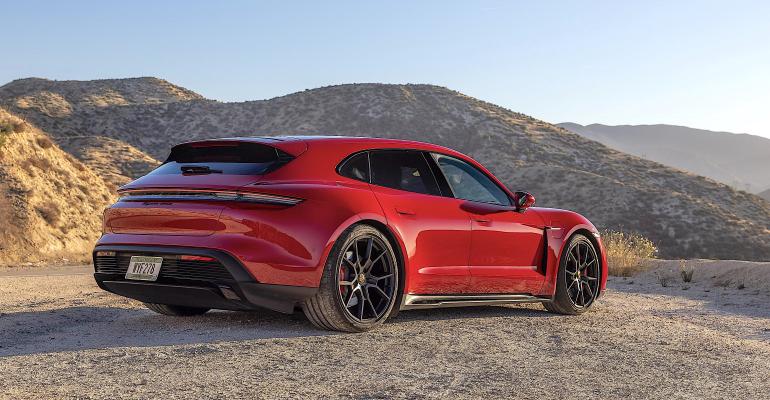 A common criticism of electric vehicles is that EVs are all the same. They all look the same, they all drive the same, they are all dull and indistinguishable. Porsche takes issue with this opinion and shows its error with the 2022 Taycan Sport Turismo GTS.

You likely recall that the Taycan (pronounced “tie-con”) is Porsche’s foray into the EV market. “Sport Turismo” means that the electric platform is dressed in a quasi-station wagon body that adds practicality (and some would say styling flair) to the Taycan sedan. “GTS” is Porsche’s designation for a sportier version of its cars, positioned in price and speed potential right beneath the “Turbo” and “Turbo S” models.

The Taycan was already a distinctive sedan when Porsche created not one, but two, wagon variants. The Taycan Cross Turismo hints at off-road capability with its modestly lifted suspension and vaguely off-road tires and the Sport Turismo hunkers to the pavement on its fat high-performance tires.

In a world of dull crossover SUVs, the Taycan Sport Turismo GTS provides a welcome jolt of adrenaline thanks to its dramatic styling and absolutely astounding power and handling, which it demonstrated on California’s Angeles Crest highway.

At the same time, while it is no Family Truckster while carving canyons, it is also not the kind of wagon to pile the family into for a cross-country trip to Wally World. While the Taycan sedan has 14.3 cubic feet of trunk space, the Taycan Sport Turismo’s wagon/hatch cargo area is only slightly larger, at 15.7 cubic feet.  For comparison, a 2022 Toyota Camry sits right between the two, with 15.1 cubic feet.

However, the Sport Turismo rear seats fold, providing access to 48.2 cubic feet. It is not an Oldsmobile Vista Cruiser, but the combination of the added space and the larger hatch opening in place of the sedan’s trunk lid make it more practical to haul bulky objects in the Porsche. 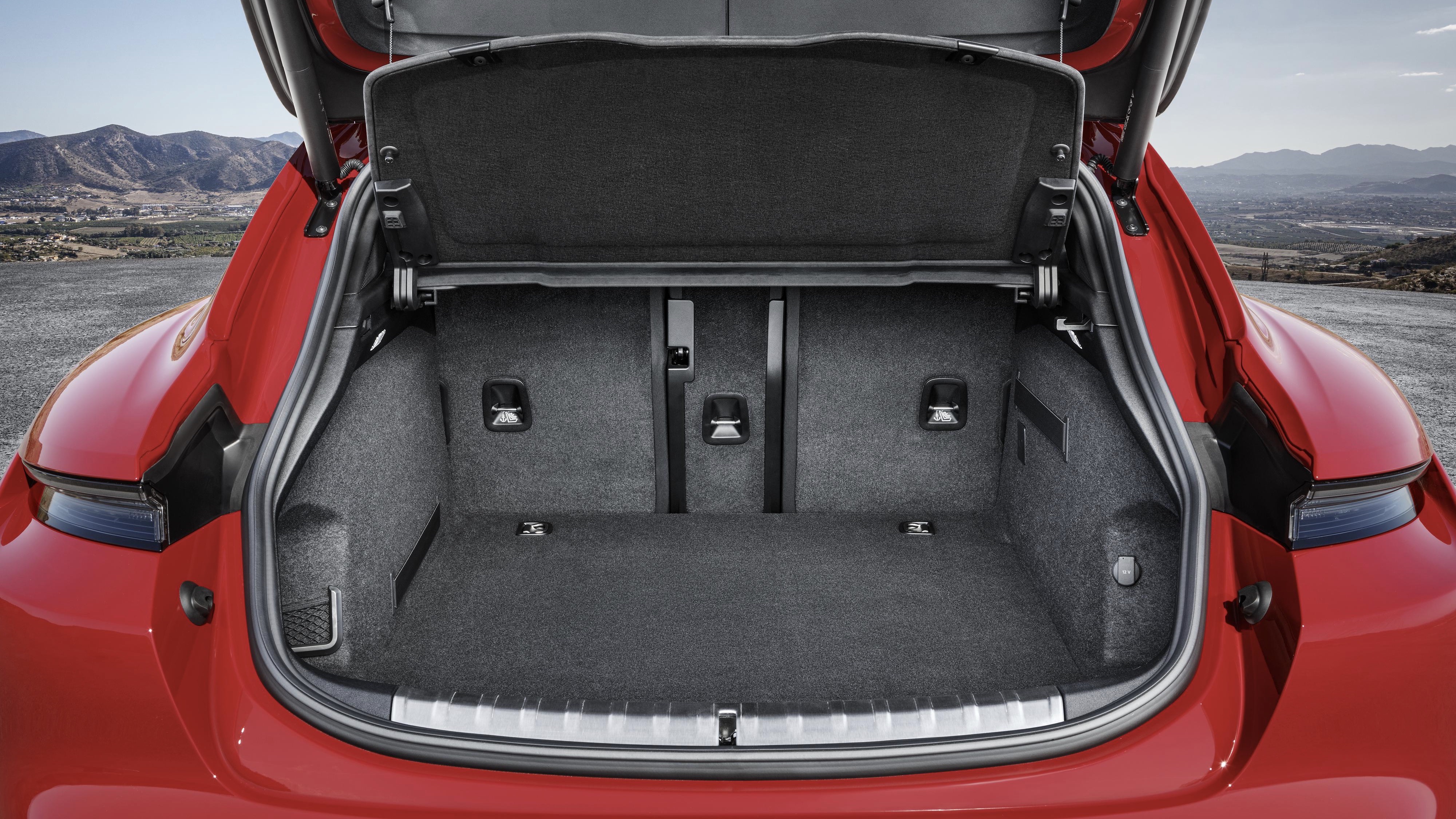 Most cars as sporty as the Porsche Taycan Sport Turismo GTS do not have this much cargo space.

However, that isn’t what drivers plan to haul when they lay out $134,650 for a Sport Turismo GTS. And the car delivers on that plan thanks to its dual front and rear electric motors that produce a combined 509 horsepower, and 590 horsepower in short bursts when the car’s launch control system is activated. Those launches send the GTS to 60 mph in 3.5 seconds and through the quarter-mile in 11.8 seconds.

The 396-cell, 93.4-kilowatt-hour lithium-ion battery pack produced a forecast driving range of 228 miles in our test car on a temperate 65-degree day. We tested a European-market car and Porsche hasn’t announced official EPA driving range numbers yet for this specific model.

The Taycan launches into motion by engaging Drive or Reverse through a unique shifter that pulls backward for Drive or pushes forward for Reverse. However, like all such return-to-center shifters, it is possible to misunderstand the selection. Leaving a downhill parking lot after backing out of a parking space, I thought I’d pulled the shifter back hard enough to select Drive. But in fact, it was in Neutral. I coasted downhill toward the street, not realizing this. Then, when there was an opening in traffic and I stepped on the accelerator, nothing happened. I scrambled to find the shifter and pull it into drive, but this kind of mistake in other circumstances could leave a driver sitting somewhere hazardous for longer than they want to be there. I’d love to see carmakers settle on PRNDL shifters with discrete positions for each selection for just this reason. 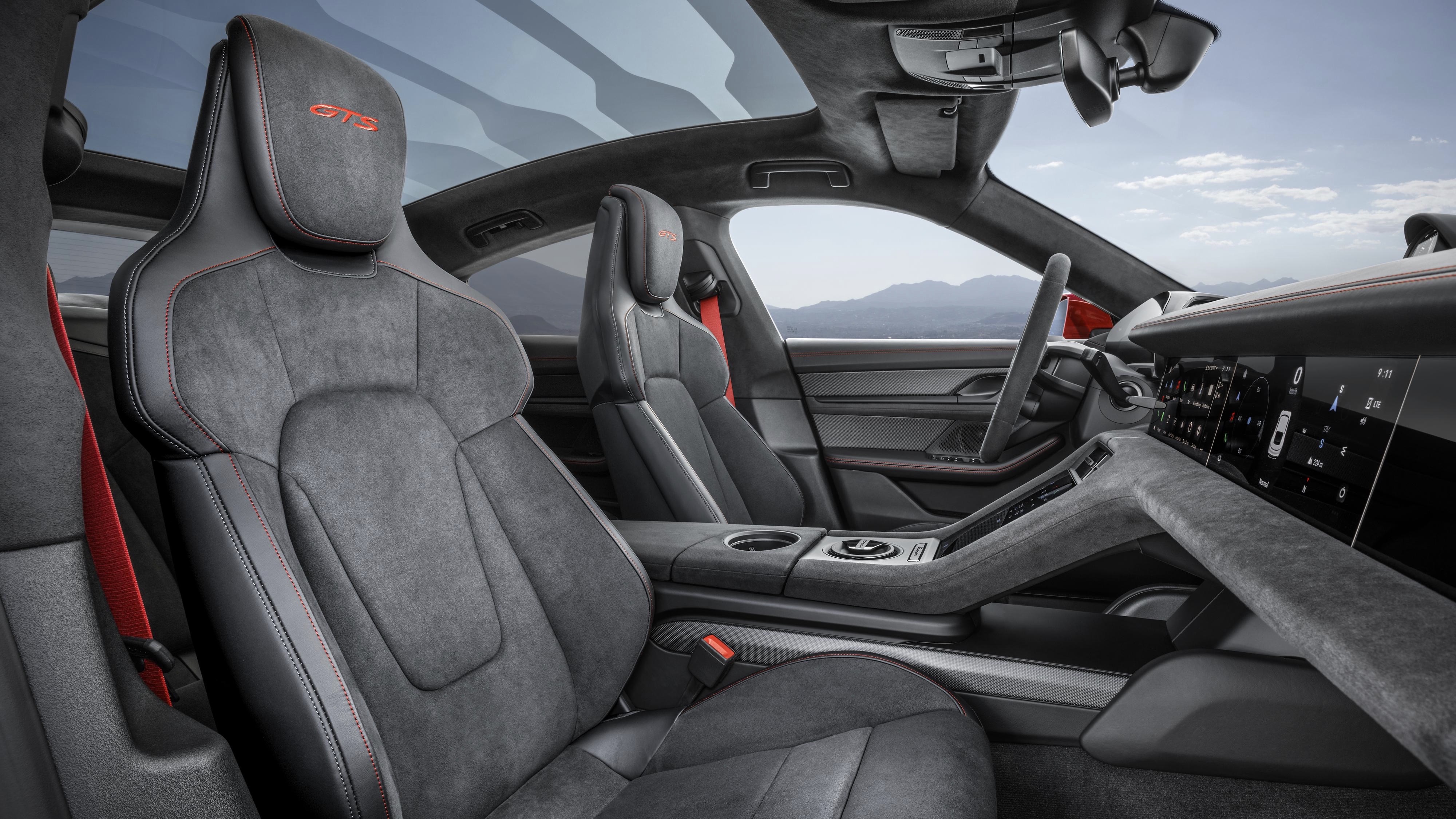 During a mixture of escape-from-the-city urban driving hard-on-the-gas (er, electrons) canyon-carving over 123 miles the Porsche used 70 percent of its battery capacity.  So under that kind of hard driving we could have expected to travel 175 miles on a charge.

Our recharge at an Electrify America 150 kW DC fast charger built by ABB added 42 kW, boosting the battery to 76 percent in 20 minutes. Again, this was under nearly ideal 65-degree conditions. Interestingly, the Taycan includes a display for battery temperature, so we could see that the battery pack was 89 degrees at the start of the charge, and was 106 degrees at the end.

We used a mixture of driving modes during the test, starting in Normal, then trying Range while slogging through freeway traffic, and then both Sport and Sport Plus on the Angeles Crest. These changes adjust the available power, the car’s response to the accelerator, and its suspension and steering settings with the aim to optimize them for the expected use. 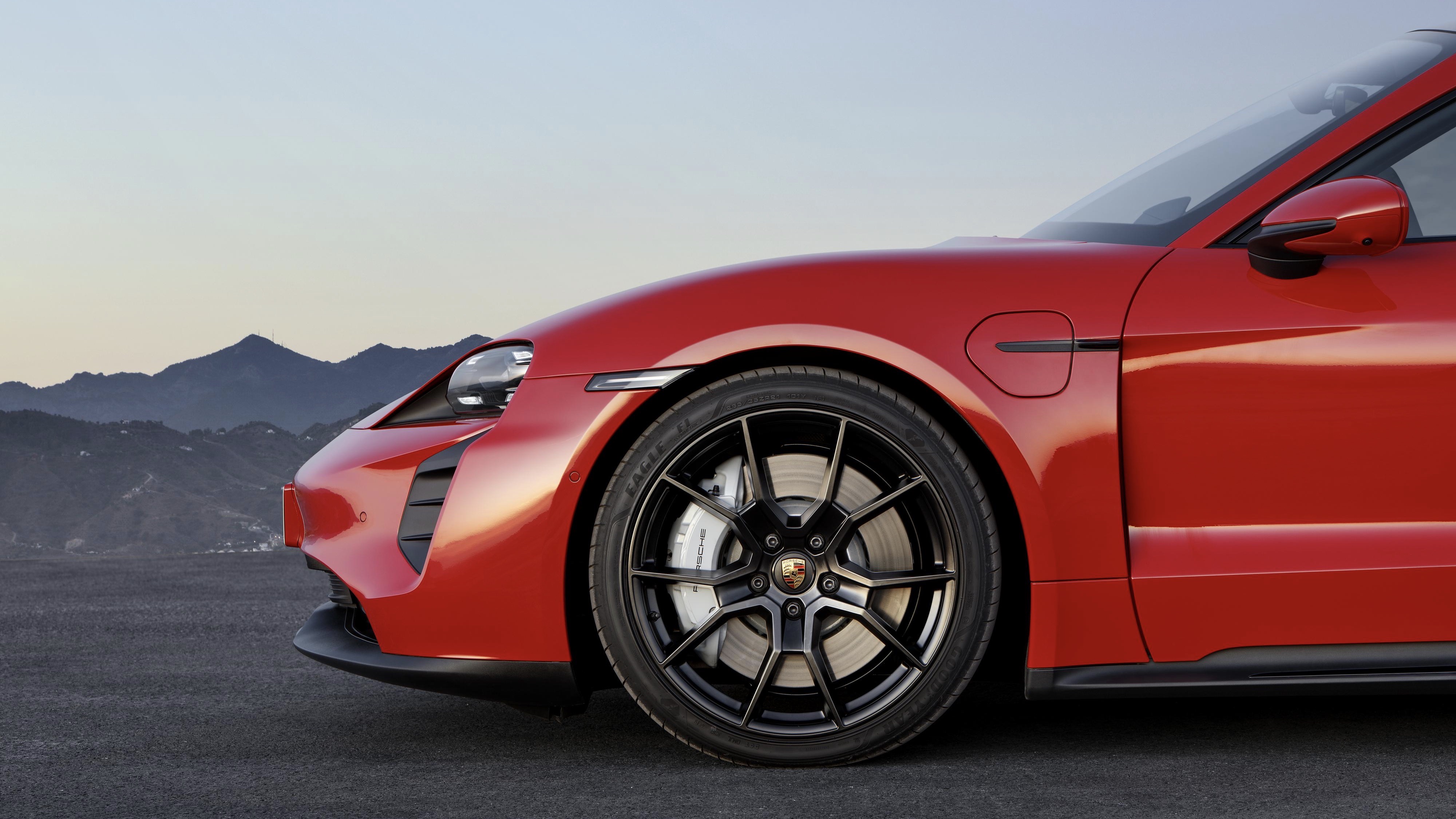 In Range mode, the Taycan Sport Turismo GTS runs on only its front electric motor and has a driver-adjustable top speed of between 65 mph and 80 mph. The car has enough power that even in this detuned mode, it is plenty quick for around-town driving when you’d rather save battery charge for fun driving later.

Also, while this mode ostensibly has a top speed, what actually happens at that speed is that response to the accelerator goes flat, giving the impression that the Taycan won’t go any faster. Hold the pedal down, as you might in an emergency, and it gets on with it. Top speed for the car is 155 mph. That’s according to Porsche, and not by first-person observation, as this test was in California, and not on the autobahn like our BMW i4 and iX drives were, when we did go that fast.

Regardless of driving mode, the Taycan does not have the ability to provide significant regeneration when lifting off the accelerator pedal, as many EVs do. This ability to drive almost entirely without touching the brake pedal is popular with many EV drivers, but it apparently goes against Porsche’s philosophy of providing a similar driving experience in its EVs as its combustion-model customers are used to experiencing. 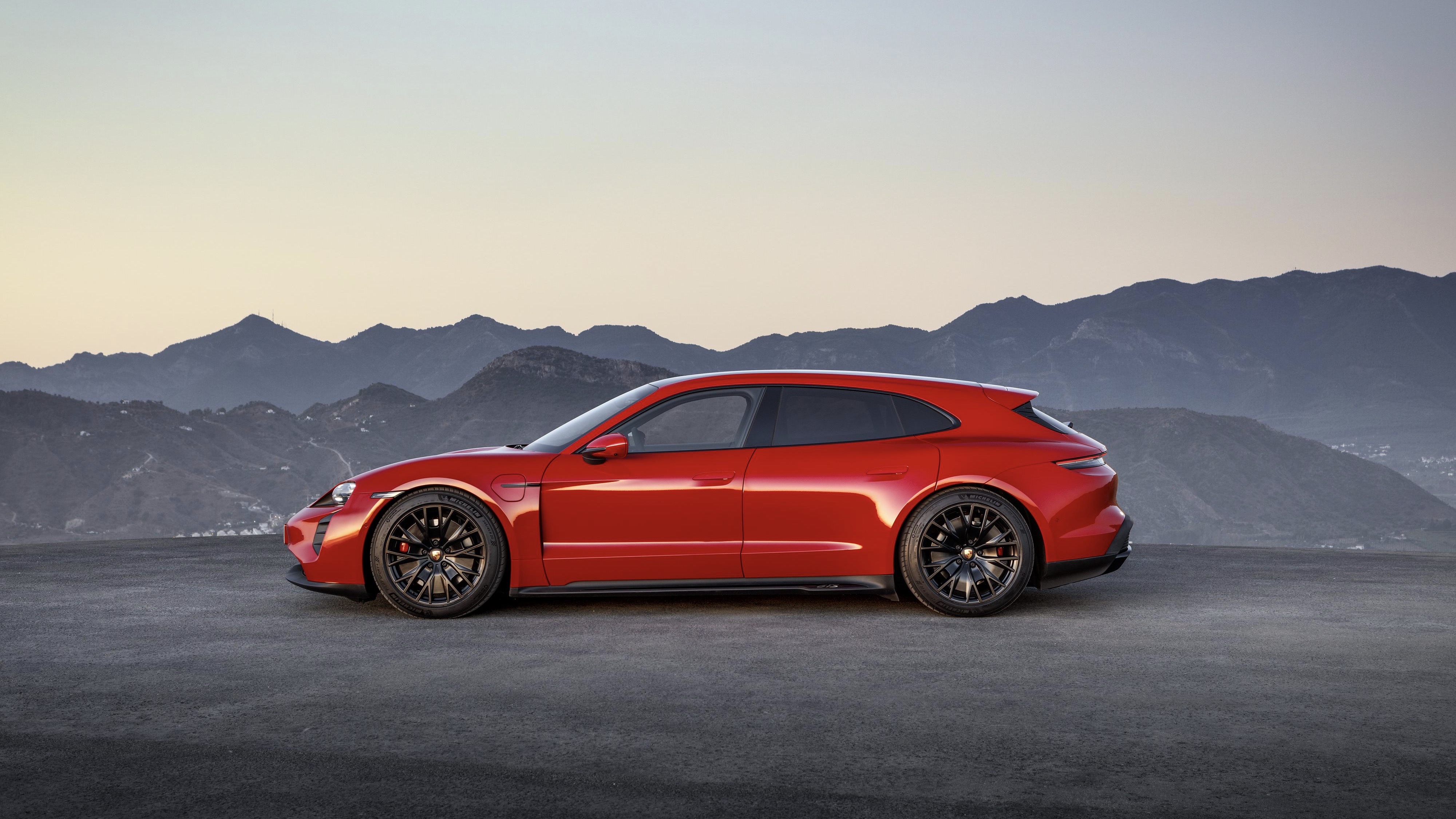 The Taycan Sport Turismo's profile say's "wagon" even if it is more like a hatchback.

We’d like to see the driver be allowed to choose which mode to use, and Porsche representatives hinted that this is under consideration for the future. Don’t look for it to be a software update that would let buyers of current cars gain that ability however, because Porsche likes to have a dedicated button for such modes, and adding that will require also adding a new button to the car if they stick to that practice.

By restricting regeneration to the brake pedal, there is no potential for an abrupt handoff between lift-throttle deceleration and the application of the brake pedal, as we experienced in the Lucid Air. This is a crucial detail in canyon driving, when the car’s balance depends on exactly how hard it is accelerating or decelerating as it flows into and out of curves.

The massive 20-inch Pirelli P-Zero tires provide absolutely incredible grip for a 5,152-lb. car. Ripping through a large-radius 270-degree corner, the GTS generated neck-stretching lateral acceleration for what seemed like a very long time without tires losing traction at either end of the car.

Along the way, the Taycan provides suitable aural accompaniment. Rather than the Hans Zimmer-composed synthesized sounds provided by the BMW i4, Porsche is using actual electric motor sound. However, as the Taycan’s electric motors are isolated from the cabin, the car provides a replay of recorded sound  through its audio system. The sounds are recorded from actual Taycan motors and refined to boost the pleasing lower frequencies and squash the annoying high frequencies, then played back with the sounds matching the actual engine speeds.

This is similar to how performers might lip-sync to a pre-recorded version of themselves when playing an acoustically terrible environment like a sports stadium. Or it could be considered analogous to applying electronic pickups to a guitar and using effects pedals to change its resulting amplified sound.

Regardless, the Taycan sounds like a winner, especially in the tested Sport Turismo GTS form. This car unequivocally refutes any criticism that EVs lack style, character, or differentiation. There’s no mistaking the Taycan Sport Turismo GTS for anything but a Porsche and it shows that the company is no danger of being left behind by the industry shift to electric power.