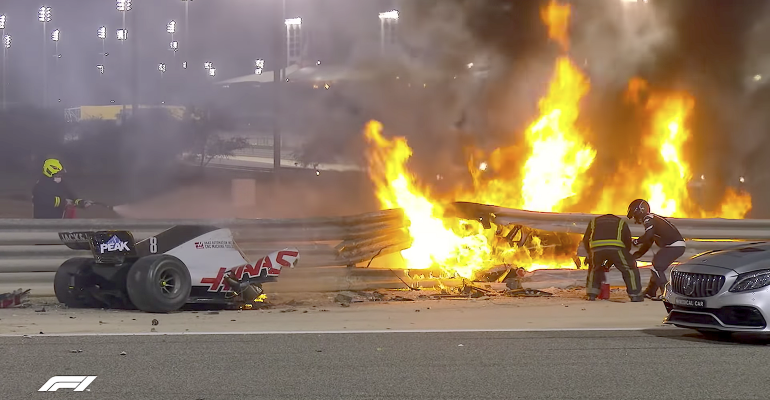 The Federation Internationale de l’Automobile (FIA) race sanctioning body and racing teams will seek to learn from Haas F1 driver Romain Grosjean shocking fiery crash during the opening lap of the 2020 Bahrain Grand Prix to prevent such a chain of events from happening in the future.

Formula 1 cars aren’t supposed to break apart and explode on impact, as Grosjean’s Haas ZF-20 race car did. They are not only constructed of sturdy carbon fiber which is expected to withstand ferocious impacts, but they contain penetration-resistant composite fuel cell liners filled with explosion-suppressing foam designed to prevent exactly the pyrotechnic outcome horrified viewers witnessed.

“We’ve got to look at how everything failed,” stated Formula 1 Managing Director, Motorsport, Ross Brawn. “Everything’s designed to fail in a progression. In a crash that catastrophic, obviously things failed in unpredicted ways.”

Concerns lie not only with the car itself, but also with the guard rails that are meant to keep cars on the track. In Grosjean’s crash, the Haas ZF-20 speared through the guard rail, which then cut the car in half at the bulkhead between the driver and the mid-mounted powertrain. This junction is where the fuel cell mounts. It is located at the center of the car for maximum safety as well as for mass centralization.

The crash happened when Grosjean responded to slower cars ahead and another car that was off the left side of the track by veering to his right to avoid those cars. Unfortunately, the Scuderia Alpha Tauri AT01 car of Daniil Kvyat was trailing on Grosjean’s right quarter and the right rear tire of Grosjean’s Haas clipped Kvyat’s Alpha Tauri, turning Grosjean’s car toward the guard rail.

That specific section of guard rail was not parallel to the track, as it was angled to shield a track entry point for emergency response vehicles, and the result was that Grosjean’s car hit the steel barricade nearly head-on at 140 mph.

The impact pierced the guard rail, with the Haas’s monocoque tub containing the driver’s cockpit stopping on the other side, while the powertrain and rear suspension end of the car came to rest on the track side. 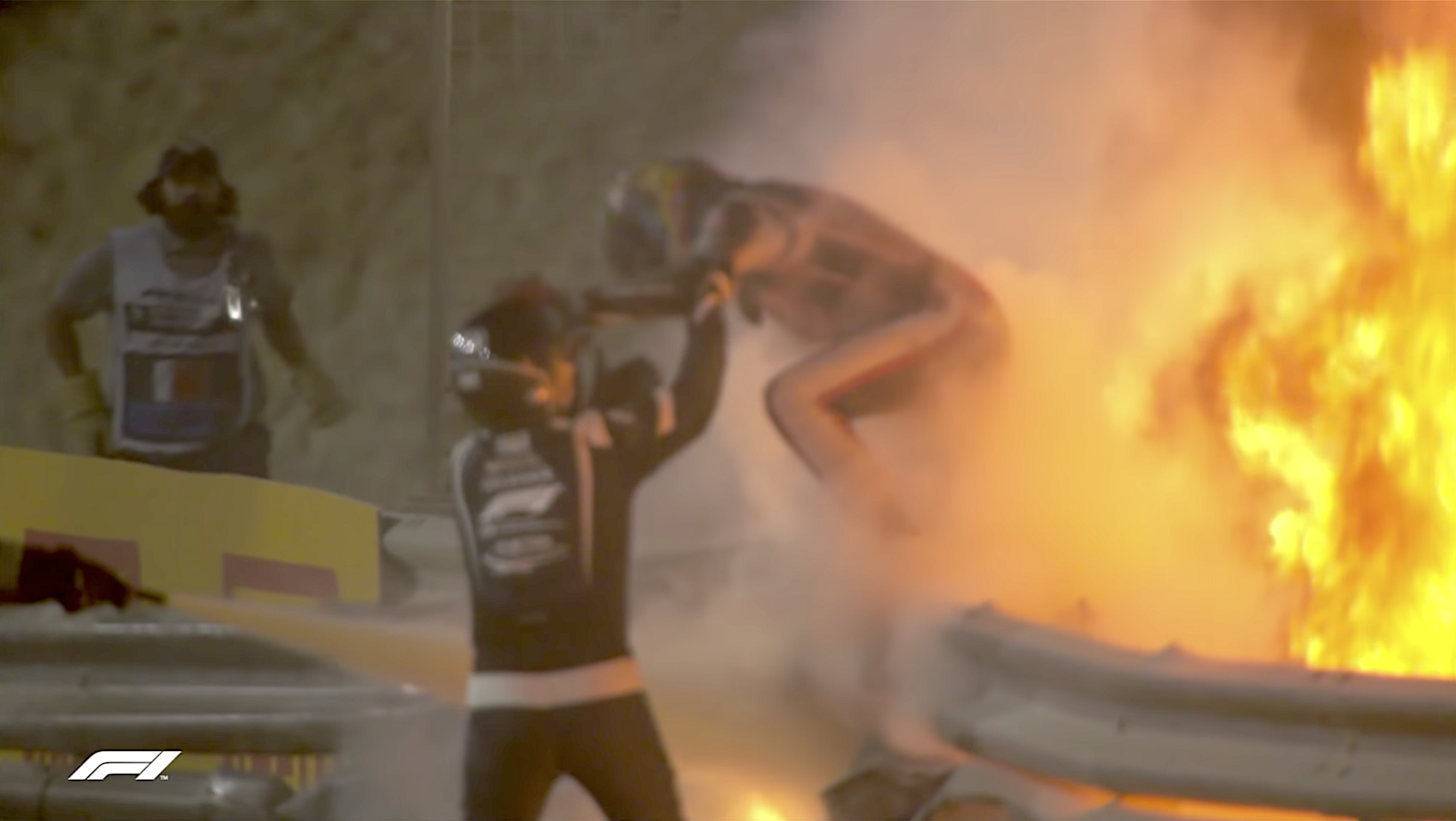 Almost instantly, an inferno ignited, leaving Grosjean strapped into his car amidst the flames. Formula 1 standard practice is for race medical delegate Dr. Ian Roberts to follow the race cars around for the first lap in an emergency response vehicle, which permits him to be on the scene of a crash within seconds.

Track workers and the medical car driver Alan van der Merwe battled the flames with fire extinguishers while Roberts attempted to assist Grosjean’s efforts to climb out of the wreckage. It took him about 20 seconds to scramble to safety from the fire, and Grosjean suffered burns to his hands and ankles along with broken ribs from the impact, but surprisingly, no inhalation injuries from smoke or fire.

Dr. Roberts reported that he had difficulty immediately assessing Grosjean’s condition because the composite face shield on Grosjean’s helmet was melted and opaque. Grosjean was able to issue an update to the world from the hospital via Twitter only a few hours later, saying he is fine while acknowledging that his hands are heavily bandaged.

An update from Romain himself. Pleased to see you’re in good spirits! We hope you make a speedy recovery pic.twitter.com/njnjjH4GBi

With the driver safe, now it is time for the engineers to study the events to improve the survival chances of other drivers in the future. “We’ll have a deep investigation to understand what we can learn from it, because seeing a barrier split like that is clearly not what we want to see,” said Brawn.

“We’ve got to do an analysis of all the events that occurred because there were a number of things that shouldn’t have happened,” he explained. “The fire was worrying. The split of the barrier was worrying.”

“Barrier splitting was a classic problem many years ago,” Brawn recalled. “Normally it resulted in a fatality. There’s absolutely no doubt the Halo was the factor that saved the day and saved Romain.”

The introduction of F1’s Halo in 2018, and the Indycar Aeroscreen in 2020, were met by criticism from traditionalists who didn’t like their appearance. But their safety value has now been proved. “I don’t think anyone now, especially after today, can doubt the validity of that and the value of it,” Brawn said. “Hats off to everyone involved, because it was a lifesaver today.”

Brawn elaborated in a post on the FIA media site, “The FIA, working with the team, have to understand the dynamics of what happened in the accident to see if improvements are possible. It was a pretty severe impact and there are limits as to what you’d be able to contain or control. But penetrating the barrier like that has to be understood. It also has to be understood why there was a fire and why the car broke in two. These are the things that the FIA will now take the time to analyze and work out what can be done better.”

Despite the conflagration, Brawn said that he does not believe the investigation will find that the fuel cell failed in its job of preventing a rupture. “The fuel cell’s incredibly strong. I suspect that [the fire] came from a ruptured connection,” he said.

“The flexible fuel bladder must be manufactured from a reinforced material in polyamide, polyester, aramid, or equivalent impregnated and coated on both sides with a fuel resistant elastomer. All physical properties detailed below shall be maintained throughout all areas of the finished fuel bladder, including seams, joints, and fittings.”

Manufacturers must test the cell for distortion strength, tensile strength, puncture strength, seam strength, and tear strength. The standard is equally stringent for the cell’s openings and connections:

“All apertures in the fuel bladder shall be closed by hatches or fittings which are secured to metallic or composite bolt rings bonded to the inside of the fuel bladder. Nevertheless, connections of the type corresponding to Fig. 5 are authorized when space is not available for a bolt ring assembly.

Connections of the type corresponding to Fig. 6 are also authorized with the following restrictions:

All apertures in the fuel bladder shall also be reinforced with at least one extra ply of similar fuel bladder material (see Fig 3), this doubler shall be at least as wide as the bolt ring (when applicable) All threaded studs and inserts shall be anti-corrosive. Bolt hole edges shall be no less than 5 mm from the edge of the bolt ring, hatch, or fitting.”

While Brawn said that he expects the investigation will show that the fuel cell did its job of preventing an even worse fire, there is no doubt that the Halo performed above and beyond any reasonable expectations, as it chiseled a hole through the steer barrier for the driver’s head to pass.

Halos for F1 teams come from three approved suppliers; Germany’s CP Tech, Britain’s SST Technology, and Italy’s V System. The Haas team does not list its Halo provider, but the team’s chassis comes from Italy’s Dallara, the same company that builds every car in the Indy 500, and its engine, transmission, and steering come from Ferrari in Italy.

The Halo cockpit protection device is made of grade 5 titanium and weighs 16.5 lbs. (7.5 kg). The FIA has an equally stringent specification for Formula 3 cars, which use steel for their Halo, which weighs twice as much. The Halo has to withstand 125 kiloNewtons of force (equivalent to 12 tons in weight) from above for five seconds without a failure to any part of the survival cell or the mountings. It must also withstand forces of 125 kN from the side. It will be interesting to see whether the FIA now adds a front force test too.

The fabrication requirements for these devices are exacting, according to Steffen Zacharias of CP Tech. “You need state-of-the-art machining parts to do the pre-machining and the post-welding final machining,” explained Zacharias. “You need a welding chamber in a closed atmosphere to do the welding process, and you need the supply chain for the material.”

CP Tech starts with forged blocks of titanium that are heat-treated for maximum strength. The company machines sections from the block and gun-drills the tubes to reduce their weight. Five separate pieces go together to create the complete Halo.

Then CP Tech welds the pieces together in a closed chamber to prevent any contamination, and that is followed by another round of heat treatment. Every device is geometry-checked, weight-checked and undergoes non-destructive testing, including x-rays and crack tests.

“We do these tests in-house,” says Zacharias. “Coming from the aerospace industry, we have a very intense testing area, including physical test benches and life-cycle testing. We test all our parts in-house by certified people to an aerospace standard.” CP Tech shot-cleans the final product to abrade its surface so teams can bond the composite aerodynamic parts for their individual designs.

While these pieces played their roles in protecting Grosjean in this crash, perhaps the investigation will find potential improvements. Certainly, the current requirements for the steel guard rails will need to be revisited in light of Grosjean’s ability to drive straight through one. This will be determined by the FIA’s Serious Accident Study Group (SASG). 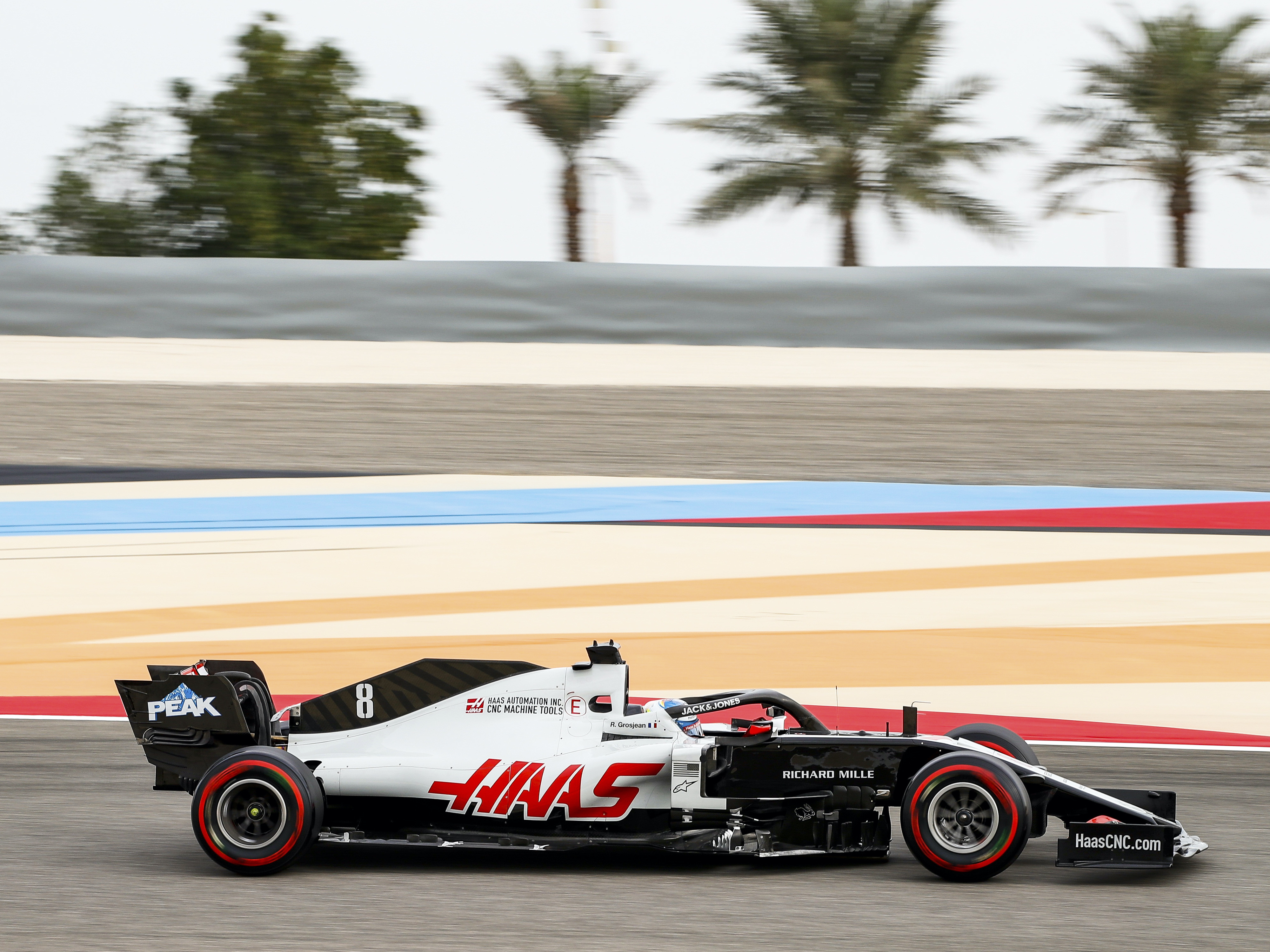 Romain Grosjean in the Haas VF-20 during qualifying for the 2020 Bahrain Grand Prix.

The group’s mission is to analyze each crash from both technical and medical perspectives. The team’s report on each crash provides a detailed analysis of the causes of the accident, of its mechanism, and of the damages to the car. The medical portion provides details on physical injuries and how these occurred. Then conclusions and deductions are made from these two reports.

A recent SASG report investigated motorcycle helmet safety standards, for example. We can’t know when the SASG will issue its final analysis of Grosjean’s Bahrain crash, but we can be sure that it will produce changes that reduce the likelihood of fatal crashes in the future.