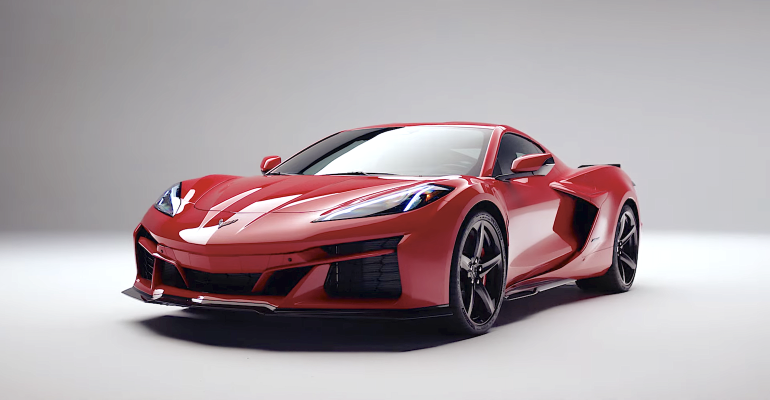 Chevrolet’s Corvette continues its march back to its rightful place as a technology leader after decades of stagnation turned the car into a nostalgic vehicle for older drivers, with the announcement of the E-Ray hybrid-electric model.

Traditionalists who scoff at electric power better get used to looking at the E-Ray’s taillights, because its 2.5-second 0-60 mph acceleration time makes it the quickest-accelerating ‘Vette yet. Hold the gas pedal down a bit longer and the E-Ray sprints through the quarter mile in 10.5 seconds.

Related: Why the Original Mid-Engine Corvette DCT Was Crazy Complicated

The Corvette’s familiar 495-horsepower overhead-valve small block V8 engine rides behind the cabin, driving the rear wheels through the 8-speed Tremec dual-clutch transmission, just as in the dazzling Corvette Stingray.

What’s new here is a 1.9-kilowatt-hour lithium-ion battery pack sandwiched into the Corvette’s center spine. It is wired to a compact 160-horsepower electric motor that drives the front wheels, providing a hybrid drivetrain and the security of all-wheel drive. Total power to all four wheels is 655 hp.

Related: 2023 Corvette Z06 Delivers Supercar Goods on the Road and the Track

“For the first time ever, I think a Corvette has really become practical in four-season driving,” remarked chief engineer Josh Holder. “We’ve driven this car in places I never thought we would drive Corvettes: Inches of snow, on grades, in those kind of conditions and the car is absolutely outstanding.”

Additionally, the E-Ray is available with suitable tires for driving in such conditions. “We’re offering this big, wide tire in an all-season tire, developed with our partners at Michelin,” Holder states. “We developed an all-season tire that’s capable of all weather conditions yet still provides outstanding dry traction performance: One g of lateral acceleration. Of course, we’re going to offer a summer tire, our PS4S summer tire that’s 1.1 gs of acceleration.”

The E-Ray’s traction battery pack is very small and this is not a plug-in hybrid. Like the first Toyota Prius, the Corvette E-Ray energizes its battery pack by recovering energy during deceleration. There’s enough juice in the battery to propel the Corvette at speeds as high as 45 mph over a distance of three or four miles, according to Holder. That’s plenty for sneaking out of your neighborhood in the morning without irritating the neighbors with the small block’s shouting.

The E-Ray is what was described as a “through-the-road” hybrid in the early days of hybrid-electric vehicles because the electric powertrain is not connected to the combustion drivetrain, so the exchange of energy happens through the road.

“We packaged the battery and the power electronics in the central tunnel of the body structure,” Holder explained. That way it doesn’t intrude into the cabin space at all. Similarly, the front electric motor hasn’t cost the E-Ray its front trunk (frunk) storage space. “The electric motor, while it’s powerful – it’s rated at 160 horsepower – it is very compact,” Holder said. “The [motor’s] stator is only 175 mm in diameter so that space behind the frunk is where that motor is packaged and we were able to preserve all of the front storage space that Corvette customers have come to expect.”

The E-Ray’s hybrid-electric drivetrain falls slightly short of the Z06’s 670 horsepower, but it is close in power and it applies its power through all four tires, which is why it can accelerate even quicker than the Z06. It rolls on similarly wide rubber, which is wrapped by the same widened fenders worn by the Z06, assuring a menacing stance that won’t be confused for an economy-oriented hybrid.

The Z06’s carbon ceramic Brembo brakes are standard equipment on the E-Ray and even the Carbon Revolution carbon fiber wheels are an available option. Consider some of the E-Ray’s features:

The Corvette E-Ray will arrive in dealers as a 2024 model later this year. Starting base price is $104,295 for the coupe and the convertible E-Ray starts at $111,295. A heavily loaded E-Ray will tally as much as $141,700. Click through our photo gallery for additional information.