Behind the Wheel of the Incredible 2022 GMC Hummer EV Pickup 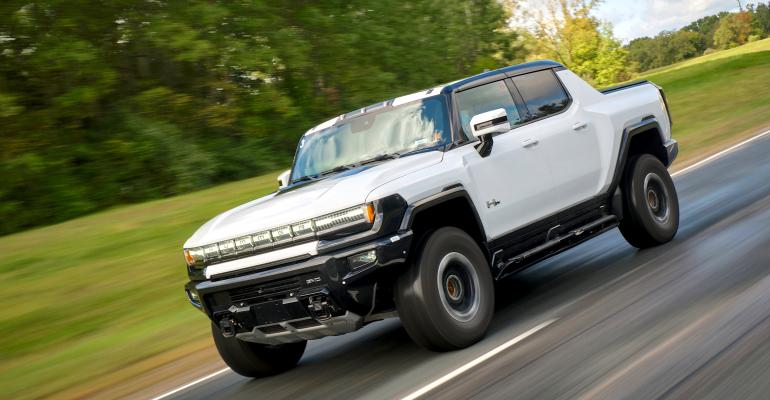 General Motors’ all-electric revival of the military-inspired Hummer off-road brand seemed a chance for the company to underscore its conversion to the EV faith. The thirsty gas-powered Hummer was the object of environmentalists’ scorn, so a battery EV with an EPA miles per gallon equivalent rating similar to that of the all-wheel-drive version of the Toyota Prius hybrid (47 mpge vs. 49 mpg) would seem like success.

Instead, the Hummer has been met with opprobrium from critics who deride its size and weight rather than lauding its efficiency and that, unlike the Prius, it can be powered by renewable sources of electricity. GM underscored this point by charging the vehicles at the media test drive event entirely using the Hydrotec portable hydrogen fuel cell chargers the company has developed for commercial and military customers. These fuel cells were quieter than diesel generators but were noisier than expected due to the high cooling demands at the Phoenix test site. GM engineers said that production versions will have larger radiators to permit lower fan speeds for quieter operation.

The Hummer EV's underbody cameras show the way on the trail, and they have lens washers to clear mud from the camera.

The Hummer EV's underbody cameras show the way on the trail, and they have lens washers to clear mud from the camera.

It is important to frame the truck’s debut in terms of the technological advancement it represents for GM and how it will pave the way for the company’s future mainstream EV models for those of us who do not need the Hummer EV’s extreme off-road capabilities. The Hummer EV Pickup Edition 1 that is reaching showrooms is GM’s first vehicle to employ the company’s far-reaching Ultium platform of battery and powertrain technology.

The modular Ultium system lets GM plug in different numbers of battery packs and of electric motors to let customers choose the vehicle with the driving range, power, and price that best meets their needs. The Hummer EV exhibits the maximum potential of the current generation of these technologies, with 24 battery modules powering three motors that can rocket the truck to 60 mph in just 3.0 seconds thanks to their combined 1,000 horsepower.

The Hummer’s battery pack is stacked like a layer cake, with one 12-module pack atop another one. Other vehicles will use a single layer from this cake with 12 modules, or they could have a slice of that layer with four or eight modules.  The cells are managed through an innovative wireless system that reduces wiring in the pack by 90 percent.

That monster battery contributes to the Hummer’s porky mass. While GM doesn’t provide an official curb weight, Car & Driver magazine spotted the specs in GM’s filing with the Environmental Protection Agency, which list the weight at 9,063 lbs. Of that, the battery pack contributes 2,923 lbs., which is by itself, heavier than a compact car.

With that big 24-module battery, the truck can travel 329 miles on a charge. Its’ 800-volt charging system accommodates 350-kilowatt DC fast chargers, which GM says can add nearly 100 miles of range in ten minutes when a quick top-up is needed. However, we recently found with the Kia EV6 that the promise of 350-kW charging doesn’t always live up to the reality, so we look forward to testing this aspect in the real world.

The all-wheel-drive Hummer has one electric motor powering its front wheels and two more driving the rear wheels. Other models coming from the company could be front-drive with that single motor, rear-drive with just the pair of motors the Hummer has at the back, or like the Hummer EV, could use all three. It will depend on the model and the customer how these modules will be combined.

The Hummer has a 13.3:1 fixed gear ratio for the front axle, which has an electronic lockable differential that can deliver all of the motor’s torque to one wheel, in case traction is lost on the opposite wheel. At the rear, the two rear motors are built into one Ultium Drive unit that independently power each of the rear wheels with a fixed gear ratio of 10.5:1. These motors can independently vary torque output to each wheel to optimize traction.

Because each motor drives its own wheel, there is no differential, but a locked differential can be simulated by synchronizing the rear wheels. Seeing the truck ahead working hard to climb a rock scramble during the off-road drive, I pressed the button to pre-emptively apply the virtual rear differential lock and the Hummer made the climb effortlessly.

All of the capability exists to establish the credibility of these Ultium components and to help GM crank up their production. “[Ultium] is the platform that allows us to accommodate the future technology development, reduce costs, and speed up the technology development process,” explained Mei Cai, director of battery cell systems research. “That’s the most important thing for us.”

That is because developing all of this technology is expensive, and production will begin gradually, as GM learns how to build batteries and EVs at scale. Under these conditions, an expensive, high-profit-margin vehicle ($112,595 as tested for the Edition 1) that sells in relatively small numbers is the ideal candidate to be the first model offered to customers.

GM can slowly build its production know-how while helping recover some of its development costs by selling premium vehicles to well-heeled customers.  “The platform will provide a lot of capability,” said Cai. “It will be the driver for us to expand the EV platform. Ultium is the key for our all-electric future, and it is also a key enabler for us to deliver, globally, 30-plus EV platforms through 2025.”

Honda believes in this strategy enough that the company has partnered with GM to use the Ultium batteries and drivetrain in upcoming Honda EVs, including the Honda Prologue and an as-yet unnamed Acura crossover SUV.

Unlike Tesla’s cylindrical battery cells, Ultium batteries are pouch-style cells that slot into the modules like the expansion cards in a PC. And like those cards, they can be arrayed vertically or horizontally, depending on the packaging requirements.

This first generation of Ultium is a state-of-the-art nickel, cobalt, manganese, aluminum (NCMA) chemistry that uses 70 percent less cobalt than GM’s previous generation of EVs. Reducing and eliminating the use of rare earth metals in EV batteries and motors will be crucial to their environmental and social responsibility, as we discussed in this article.

The experience of driving the Hummer EV is remarkably unremarkable, especially considering its use of new technology as well as its size and off-road capability. The on-road ride is excellent and the air suspension system and semi-active damping on the Edition 1 test vehicle maintain an even keel.

The truck’s Drive Mode Control includes four pre-configured modes: Normal, Tow/Haul, Off-Road and Terrain, plus a configurable My Mode. In Normal mode, the Hummer EV is reminiscent of the old Hummer H2 in its ability to have surprisingly normal on-road driving manners and comfort in a large off-road machine.

But off the road, the Hummer EV is even more impressive, as it should be. This capability did not come easily, as GM engineers wrestled with tuning the truck’s software for its management of traction in different conditions, the height of the air suspension, the tuning of the adjustable dampers, and the action of the rear-wheel steering system.

This is not by accident or coincidence, but thanks to the engineering team’s hard work and experience. “One of my rock crawlers had rear steer,” recalled vehicle performance engineer Drew Mitchell, “and I knew how you would use that in a true, legit, off-road case. Not a Powerpoint presentation, sitting there thinking about it; I’d done it.”

In action, the system works automatically, turning the rear wheels in the opposite direction of the front tires at low speeds to help improve maneuverability in tight situations and in parallel with the front wheels at higher speeds. We found that this gives the long four-door pickup the maneuverability of a shorter two-door vehicle while navigating around and through off-road obstacles. This also eases the challenge of parking this behemoth by making it easier to line up for a straight shot into parking spaces.

Obviously, Mitchell wanted to do his job well. But there was also the need to maintain his credibility with his off-road racing friends. “My racing peers, I want everybody to know it is legitimate,” he said. “It’s not a half-ass attempt. We went all out. It is great for the masses, but I don’t want any of my buddies to say, “Yeah, that’s neat.” I want them to say “That’s awesome!”

The Hummer EV is a pickup, and the company has an SUV version in the works. The pickup bed is mid-sized and is rated to carry 1,300 lbs. That payload is probably more limited by the tires’ capacity than the truck’s, considering that the tires are already carrying the Hummer’s own 9,000-plus pounds all the time. Naturally, the bed is closed by GM’s nifty MultiPro tailgate, which provides a variety of configurations for maximum utility.

The Hummer EV will probably see only light-duty suburban household hauling duties, so the bed will probably be used most often to haul mulch or recycling. But the truck’s off-road capabilities are authentic, so Mitchell and his team should be proud of their tireless engineering work.

Just as importantly, the Hummer EV is a comfortable, easy-to-drive vehicle on the road, with GM’s Super Cruise SAE Level 2 driver assistance to make the job of piloting this four-wheeled cruise ship even easier on suitable limited-access highways. Drivers will enjoy efficiency that measures up against environmentalist stalwarts like the Prius, but with the flexibility to be powered by renewable sources of electricity.

But Hummer’s most important attribute will be the vehicle’s inauguration of GM’s all-out conversion to electric power with the Ultium platform and the future affordable EVs meant for the large majority of us who don’t buy monster off-road trucks.