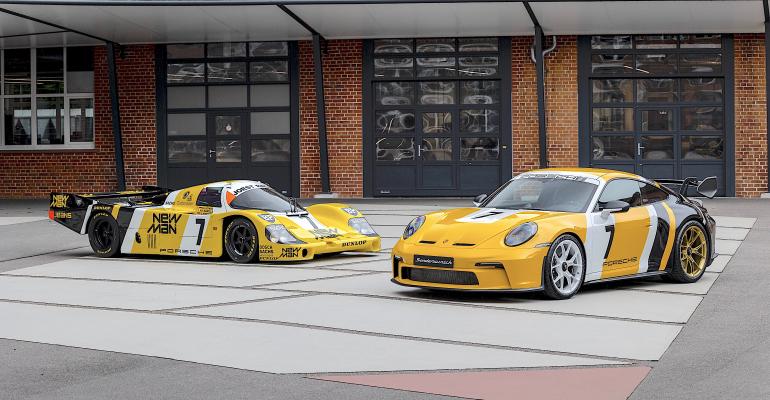 Start Slideshow ›
The 2021 Porsche 911 GT3 (992-generation, left) sits with its inspiration, the Porsche 956 sports racing car.
His 1985 Le Mans-winning Porsche 956 served as the inspiration for this custom creation by Porsche Exclusive Manufactur.

A highlight of Barilla pasta heir and deputy chairman Paolo Barilla's life was his winning drive in the 1985 24 Hours of Le Mans, and to mark his 60th birthday, the pasta executive commissioned Porsche Exclusive Manufactur to recreate his victorious Porsche 956 race car using a new 911 GT3 sports car.

Barilla's new car is painted in the same Summer Yellow, white, and black color scheme as his old race car, and it wears the same black number 7 on the doors and hood. Detail parts of the car such as the shifter and the rear wing were customized to more closely reflect those on the 956 racer.

"In the '80s, I had the chance to drive the wonderful Porsche 956, an iconic car in terms of performance and beauty," says Paolo Barilla, ex-racing driver and Deputy Chairman of the Italian food company. "The interpretation of some elements in a modern GT3 makes that memory exciting and vital – for me and for people who are close to me.”

As Alexander Fabig, Vice President Individualisation and Classic at Porsche AG explains, "the cooperation with Paolo Barilla was a very special project for Porsche too. Because not only is the handcrafted 911 GT3 itself highly individual, but its design process is also unique."

The car's gestation stretched over three years, so development actually began with the previous generation 911. "Many times in this project we would have had good reason to say 'It's not going to work' or 'It's too complicated,'" said Philipp Setter, Head of Sonderwunsch Customer Consultation.

Fortunately, they saw the project through to completion. Click through the slide show to learn the details.