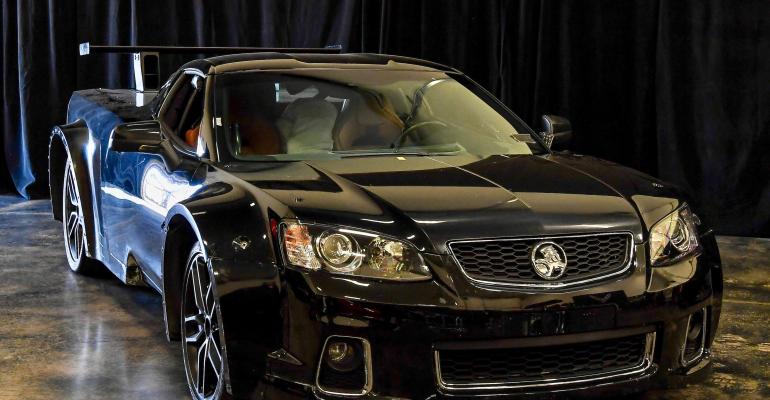 The company’s solution was to build a mid-engine engineering prototype disguised so it didn’t look like a sports car. Instead, “Blackjack,” as the matte black prototype was dubbed, looked like one of the Chevrolet El Camino-style Holden ute car-based pickup trucks that GM sold in Australia until recently.

So Chevy’s Corvette engineers built Blackjack in 2014 to start the process of creating the 2020 Corvette Stingray mid-engine sports car. “We needed to validate the structure and explore what we were going to do with the suspension,” said vehicle dynamics development engineer Steve Padilla. The chunky black development mule carried the load of testing work for two years before they moved on to more production-ready sports car-looking prototypes.

The team considered a variety of bodies that could be used to conceal Blackjack’s underlying mid-engine mechanical bits, including even a van, but ultimately settled on emulating the appearance of the Holden ute, reported Steve Padilla. Despite the inspiration, the only Holden body parts that were actually used were the front fascia, headlights, taillights, and mirrors. The car’s “cab” definitely looks wrong to be a Holden, and that’s because the windshield frame, roof, and door inner parts all come from the seventh-generation front-engine Corvette, he pointed out.

Related: Why the Original Mid-Engine Corvette DCT Was Crazy Complicated

Beneath this deceptive bodywork lies GM’s effort at building a proof of concept for the notion of going mid-engine. “You can design in CAD, but you still have to put something on the road to verify the models are correct,” he said. Additionally, there is the need to do the tuning and to make changes to the structure that can only be done in the metal.

And it was a lot of metal to start with. The engineering team built the chassis from a 7,000-lb. slab of aluminum that it machined down into the shape needed to serve as Blackjack’s foundation. “We have a numerical control machine and we weren’t afraid to us it!” Padilla cracked. 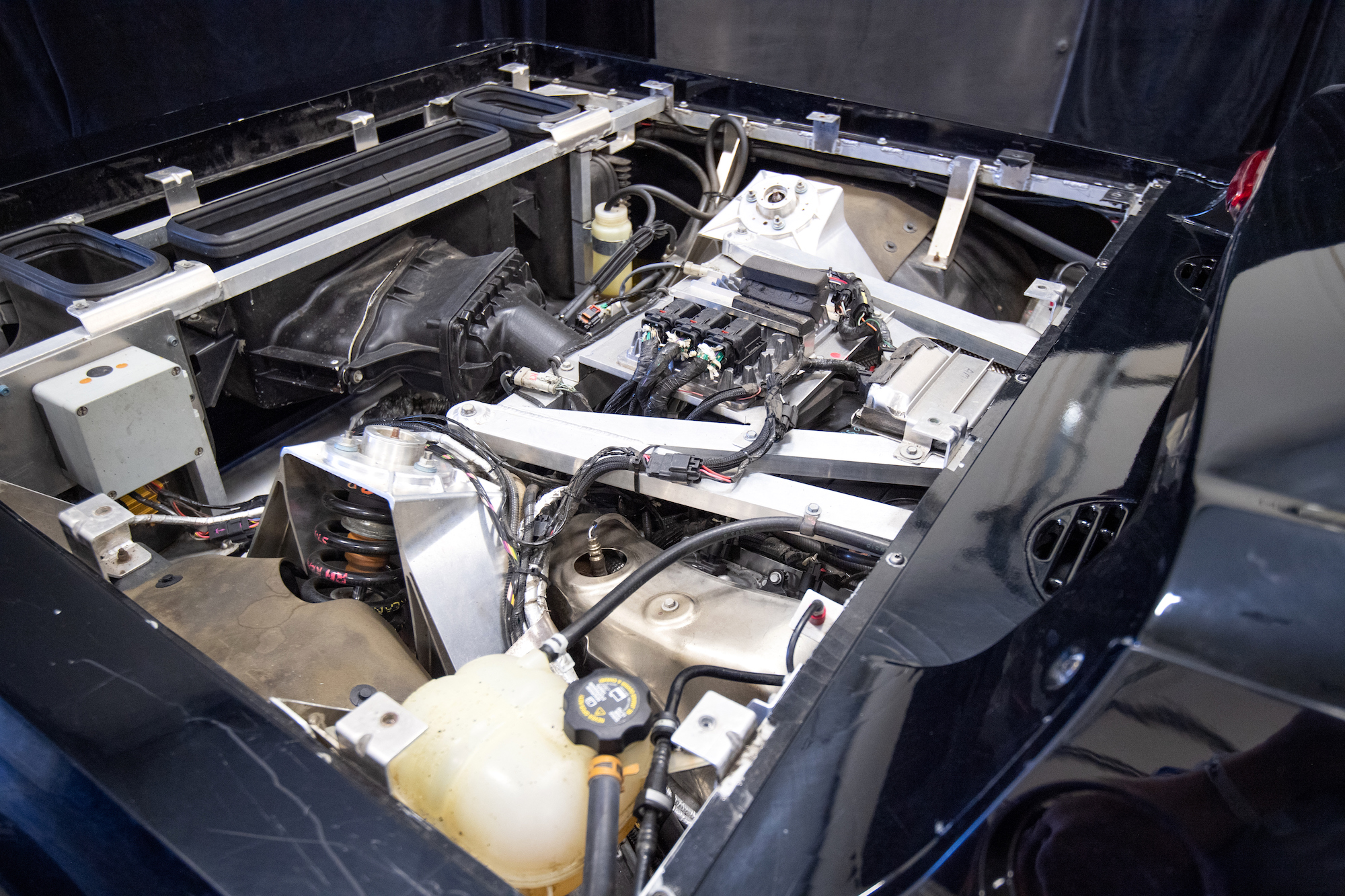 They bolted in a 6.0-liter small block V8 from the C7 Corvette, with suitable modifications to accommodate its mid-engine location. Engineers matched the engine to a ZF-sourced dual-clutch transmission that Porsche uses in its cars because its was a proven dual-clutch transaxle design that was already available.

Some of the challenges Blackjack was able to address included figuring out the routing of the exhaust and location of the mufflers and the car was able to get Michelin started on tire development at that company’s Laurens, S.C. proving grounds.

While Blackjack looks very different, its dynamic performance proved to be an accurate forecast of the eventual eighth-generation “C8” 2020 Corvette Stingray, according to Padilla. “It drives almost like a Stingray,” he said.

An index of indicated speeds versus actual speeds is hand-scrawled on Blackjack’s dashboard, ensuring that test drivers know their real speed. It is a good thing because the speedometer is short 10 mph at an indicated 90 mph. One reason that this was important was that the crazy pickup truck front bodywork generates “a ton” of lift at speed, said Padilla. Indeed, a look at the rear wing shows that it is angled upward to provide lift rather than downforce because it was more important to balance the front-end lift than it was to provide rear traction.

Secrecy was of utmost importance, with the car five or six years from production while it was being tested, so knowledge of Blackjack was limited to only a dozen or so team members, and the car was only driven in secure locations, away from spy photographers’ cameras. 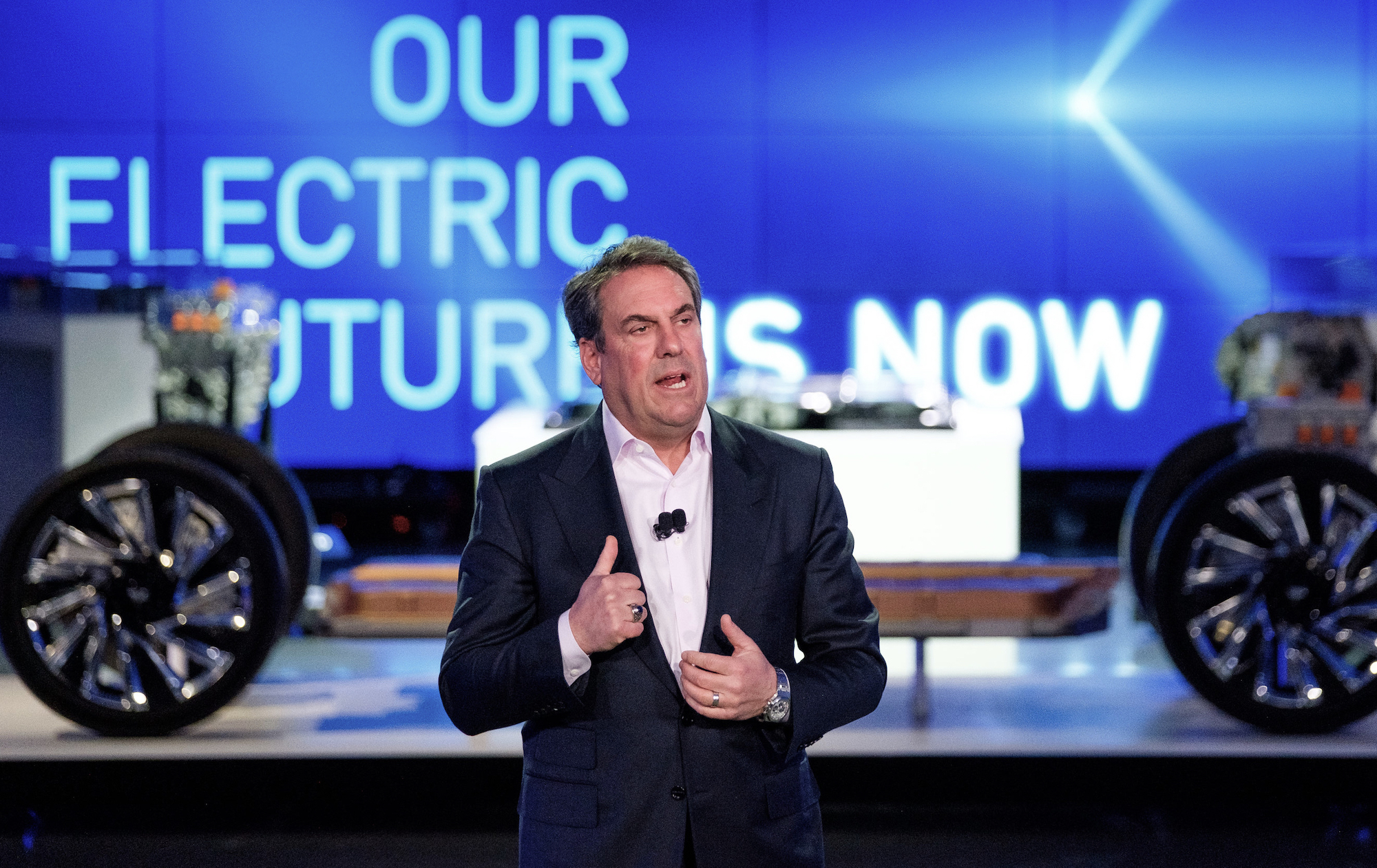 GM president Mark Reuss was one of those test drivers, and he says he loved driving the car. “It was pretty awesome!” he enthused. And the car’s importance? “It was huge,” he said. “You can say you know what ‘mid-engine’ is, and we know what it is for Ferrari, but what does mid-engine mean for us? Can we really get things sorted and develop it for GM?”

Driving Blackjack posed the risk of the secret project being exposed, and GM took extreme measures to avoid spy photographers by testing only at its own proving grounds or at Michelin’s. However, extreme photographers chase prototypes from the air using helicopters, so that was a risk to be managed when testing Blackjack.

“We were afraid of being seen because of helicopters, so we only did short stints in it,” Reuss reported.

The secrecy surrounding the car was so tight that “it was like the CIA for a while,” joked Padilla. Test drivers learned to be on their guard. “If you drive with the windows cracked open you can hear the helicopter rotors,” he said. 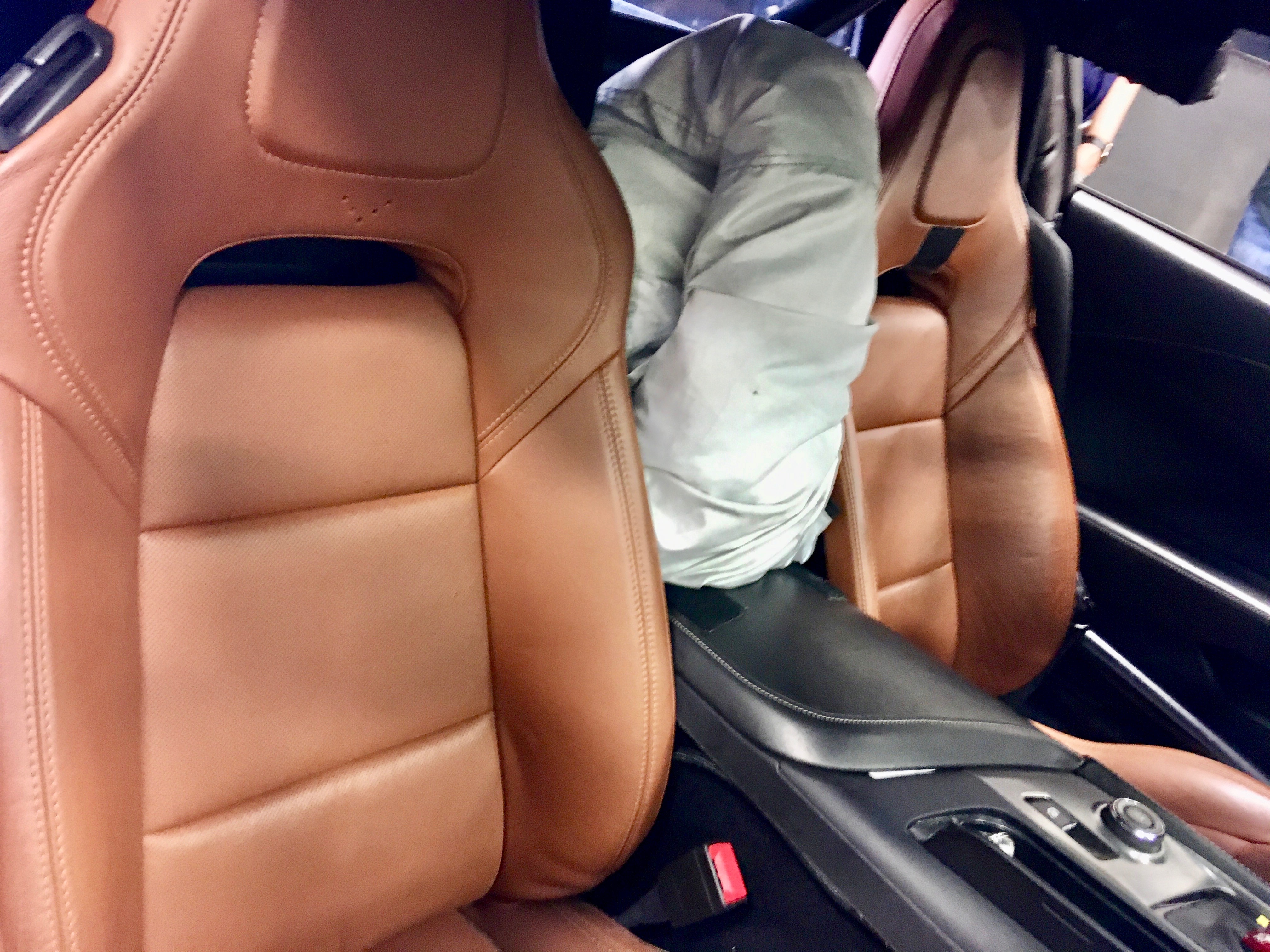 Look in the cockpit, and there’s what appears to be a deployed air bag between the seats. It is actually a car cover, which drivers had to quickly install if they heard the tell-tale rotor sound of an approaching chopper. “In an emergency, it takes six to nine seconds to get the car 90 percent covered,” Padilla noted.

Eventually, Chevrolet moved on to Corvette-looking prototypes that could help fine-tune the shock damping, further develop the tires and calibrate the electronic limited slip differential. Blackjack went into retirement, but it merits a place of honor in Corvette history, Padilla asserts. “It is probably as historically significant as any of the [Chevrolet Experimental Research Vehicles],” the early mid-engine Corvette test platforms, he said. It certainly looks more menacing than those cars! 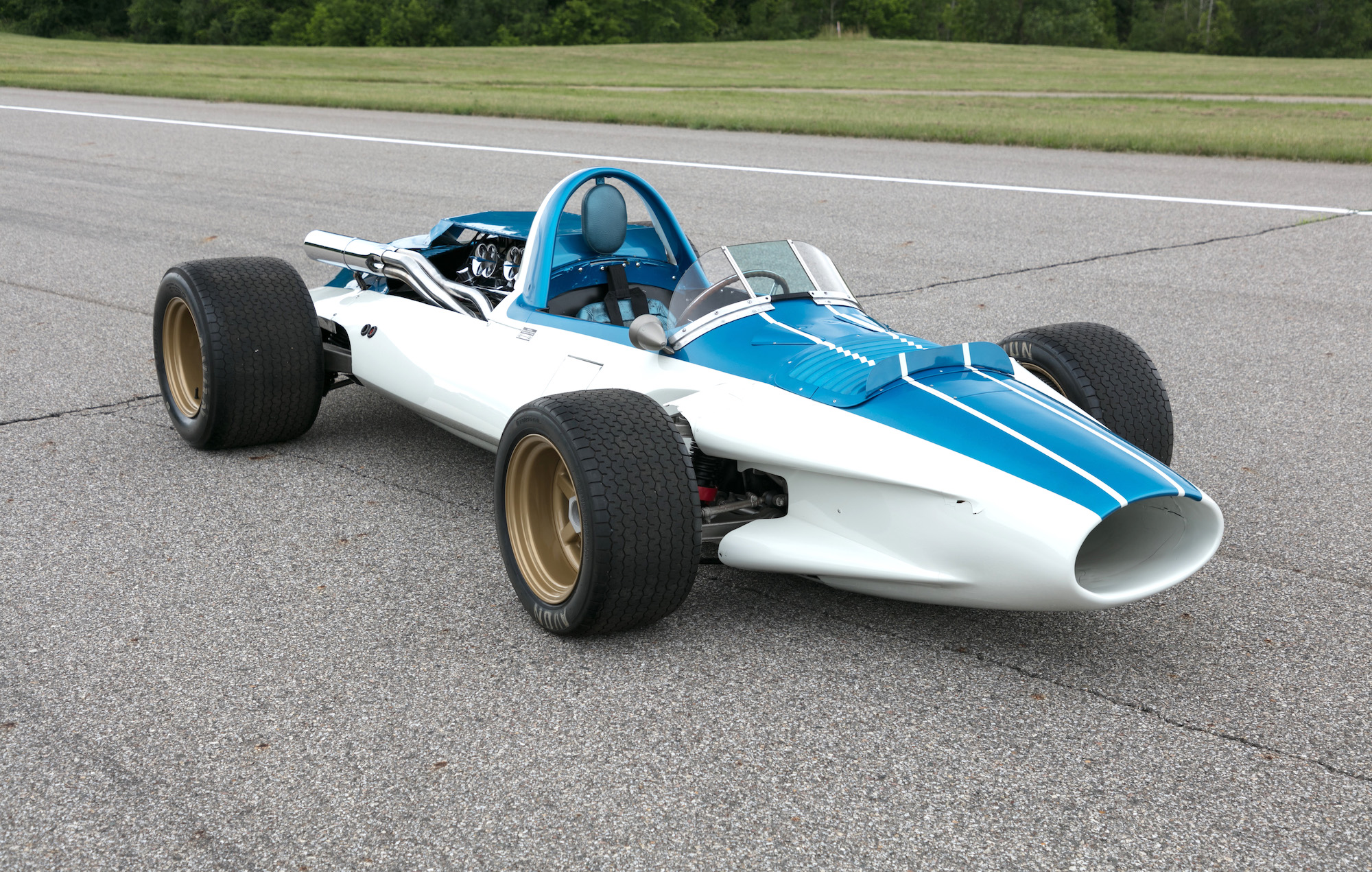