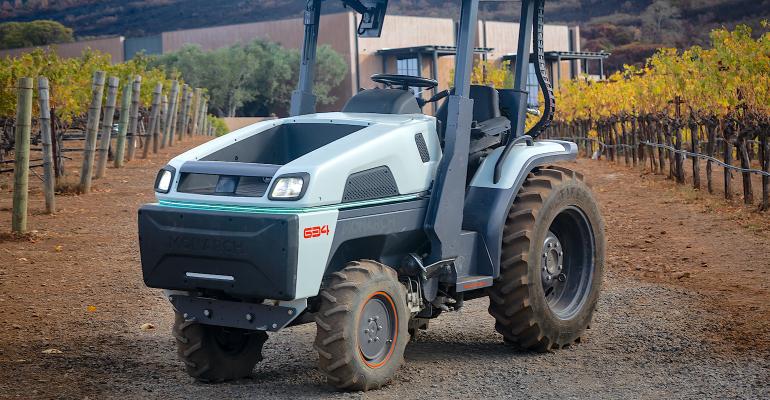 Monarch Tractor promises to deliver smart electric tractors by the end of next year.

California startup Monarch Tractor has announced its futuristic electric tractor that can even drive itself. While carmakers and others wrestle with the challenges of making autonomous cars safe enough to unleash on public roads, Monarch says that its autonomous-capable tractor marks a big improvement in safety in farm fields.

The Monarch will also save farmers money through its increased productivity. That comes not only from its ability to operate many hours a day without a person aboard but also from improvements in farms’ operations derived from data the Monarch gathers in real-time as it works.

In terms of safety, the Monarch has automatic anti-rollover technology, anti-collision technology, and a camera that watches the vehicle’s power take-off (PTO) to ensure its safe operation. Additionally, when the tractor can do things like spraying pesticides autonomously, farmers avoid potential exposure to toxic chemicals.

Related: Farmers Up Their Productivity with Automation Systems

“As a fourth-generation farmer, I’ve seen firsthand the hazards that farming presents not just to workers, but to the environment as well,” said Carlo Mondavi, chief farming officer, Monarch Tractor. “Monarch Tractor is moving farming toward a safer and sustainable future by eliminating harmful emissions, reducing the need for herbicides and keeping workers out of harm’s way with its driver-optional capabilities.”

The tractor’s electric drivetrain can muster 40 horsepower in continuous operation with short-duration peak power of 70 horsepower when necessary. The power can be allocated entirely to the drive system, to the PTO, or to the hydraulics, depending on the situation. 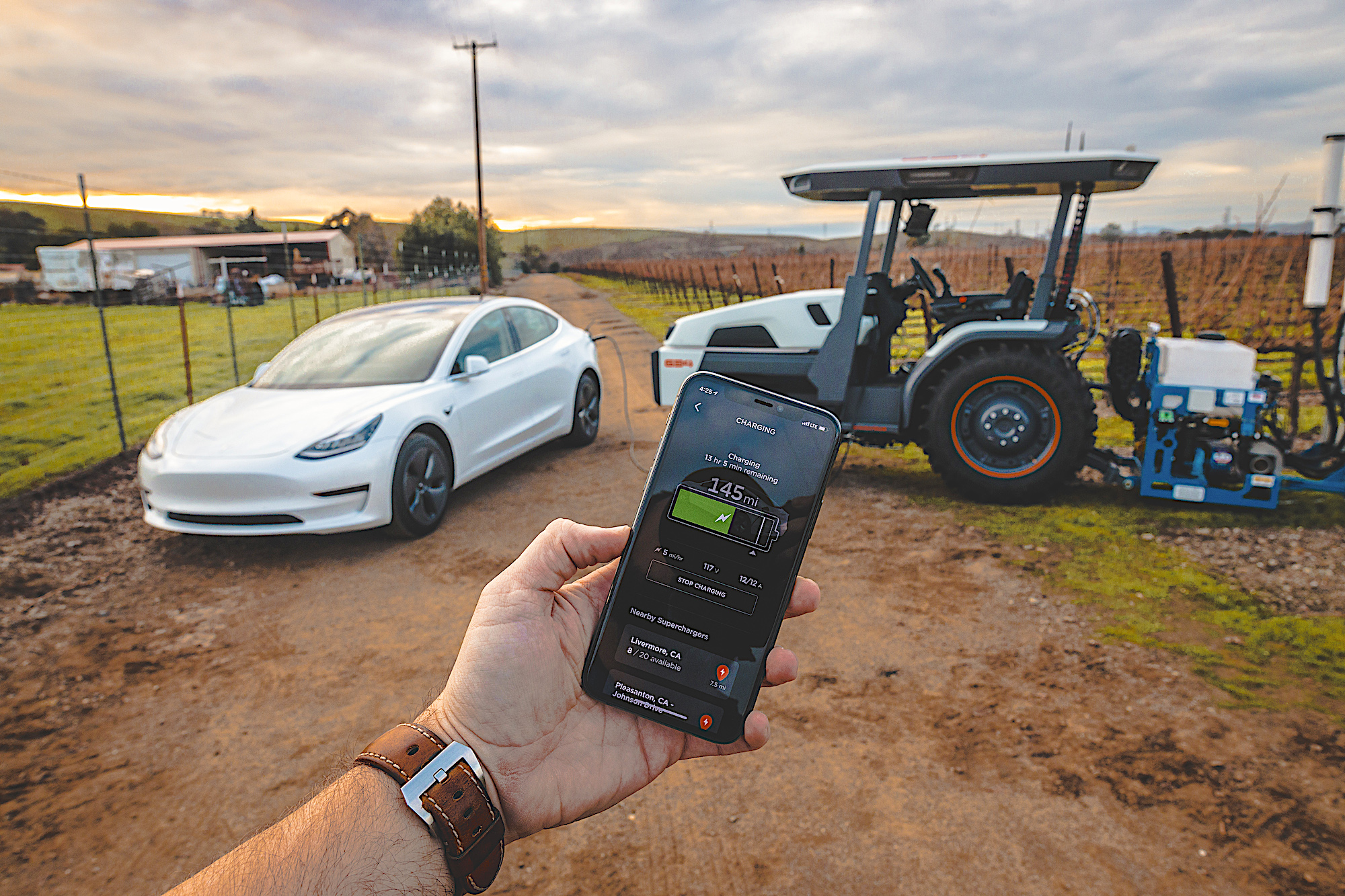 The Monarch Tractor can provide a charge to EVs.

Its battery can also provide electric power in the field, allowing it to charge EVs or run farm equipment like a welder without needing to lug a generator to the worksite.

The Monarch’s sensor suite not only documents the condition of crops but also records actual weather conditions on the ground where it is working through a built-in weather station on the roof. This amounts to 240 gigabytes of crop data gathered daily to study for potential refinement of operations.

The tractor keeps the operator informed and connected through a dedicated smartphone app that provides tractor alerts, weather updates, operations reports, and data collection and analysis.

Monarch has a conventional PTO and Ferguson three-point hitch so it works with existing implements. At the same time, the company says that it plans new implements that will incorporate autonomous capability, even for tasks that don’t appear to be good candidates for automation. 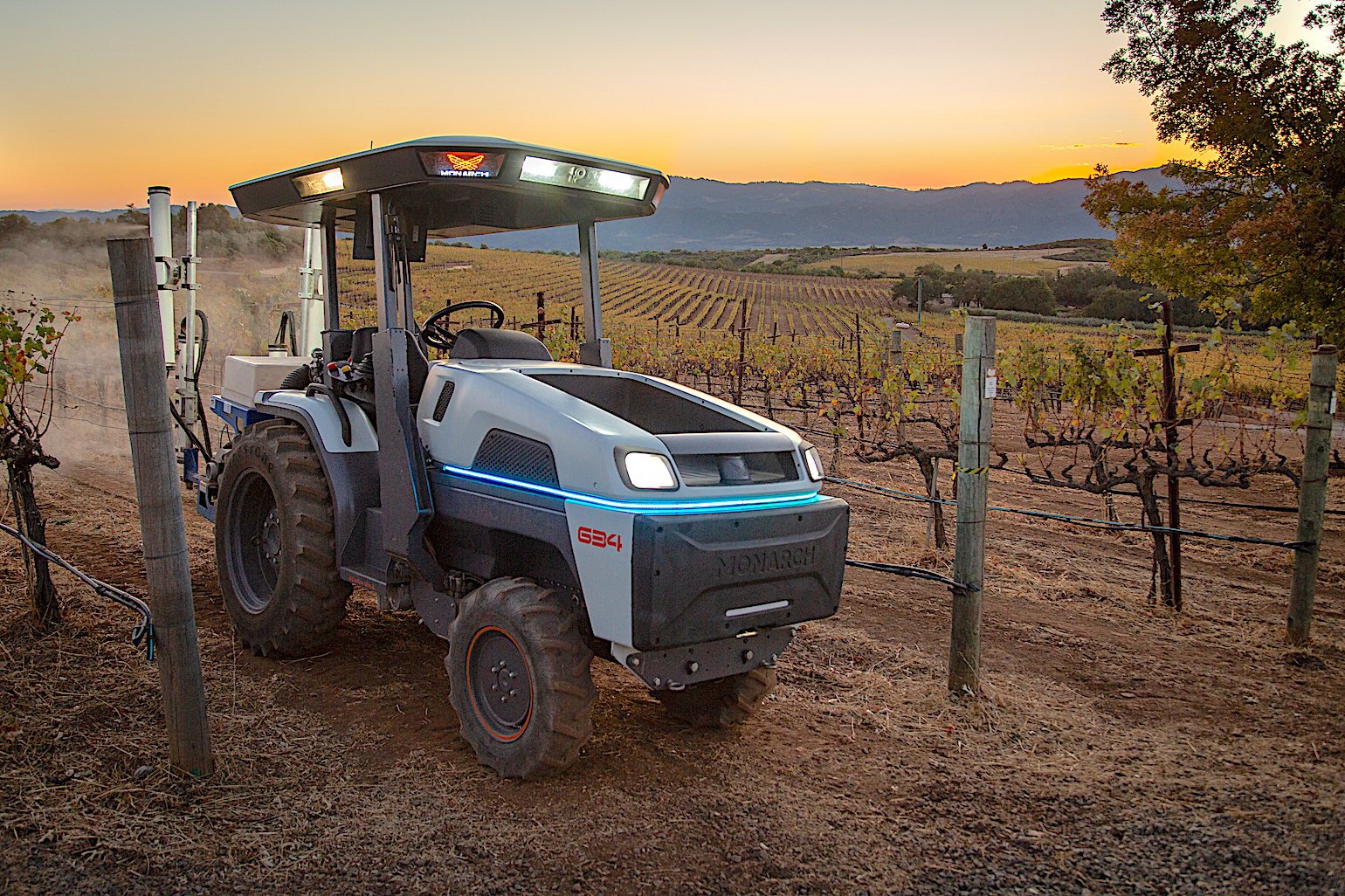 The Monarch's autonomous capability lets it navigate this vineyard by itself.

We’ll have to wait for more details on what that means, but customers can expect the first deliveries of the $50,000 tractors to start by the end of 2021.

“Monarch Tractor is ushering in the digital transformation of farming with unprecedented intelligence, technology, and safety features,” said Praveen Penmetsa, co-founder and CEO, Monarch Tractor. “We have assembled a world-class team of farmers, engineers, and scientists to meet today’s farming demands and are empowering farmers by giving them intelligent tools to collect more predictive data to implement sustainable practices, better share their story and make more money."