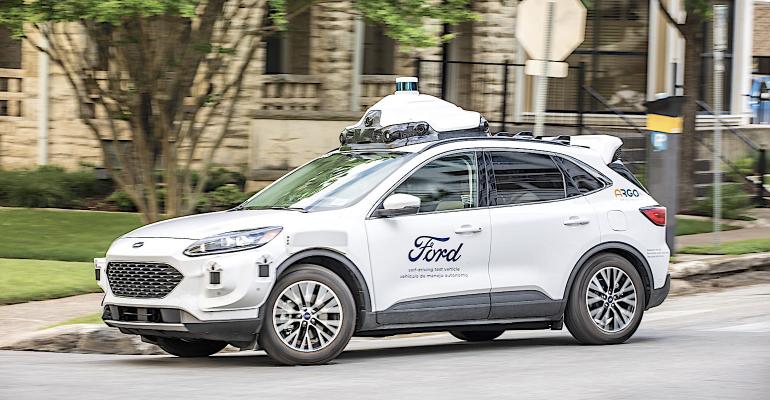 A Ford Escape Hybrid SUV from Argo AI technology on a driverless ride in Austin, Texas.
The self-driving car company has removed the safety drivers from its vehicles that encounter situations like jaywalkers to build its AI's intelligence.

The company, whose roots go back to the Carnegie Mellon University entry in the DARPA Challenge competition a decade ago, says it sees value in testing its mettle in a wide variety of environments and with a wide variety of vehicles. The aim is to prove Argo’s ability to navigate heavy traffic, pedestrians, and bicyclists in busy neighborhoods.

“From day one, we set out to tackle the hardest miles to drive — in multiple cities — because that’s where the density of customer demand is, and where our autonomy platform is developing the intelligence required to scale it into a sustainable business,” said Bryan Salesky, Founder and CEO, Argo AI.

The company cites five years of work on the Argo Autonomy Platform for its ability to share the road with others without a driver. Consider the challenge faced by Argo autonomous vehicles operating on Lyft’s rideshare network in Miami Beach. The cars navigate complex traffic scenarios including pedestrians walking outside of designated walk areas (95 percent of trips), bicyclists (95 percent), and construction (67 percent).

Related: AI Driving Systems Will Get Smarter Via AI Updates

“We engineers can sometimes be so methodical and focused on what’s next to solve, that we fail to see the big picture. For Argo, that big picture is a clear pathway to scale our operations,” explained Brett Browning, Executive Vice President of Product Development and Chief Technology Officer. “Our operations in Miami and Austin remind us that we are leading the way on this path.”

The challenges of learning to operate in these conditions help the company build its AI so that it can some day take on the task of being able to drive anywhere, he continued. “We’ve focused on analyzing real-world learnings from operating in the busiest neighborhoods of eight cities on two continents, facing complex traffic scenarios, including unprotected turns and intersections with occlusions, cyclists, and people walking outside crosswalks. We also analyzed seemingly endless data to optimize day and nighttime driving, since middle- and last-mile deliveries tend to happen during the day, and rideshares span day and night.”

Argo also considers it important for its AI platform to be compatible with multiple vehicle types. So far, the company has worked very closely with Ford and Volkswagen to follow a systems engineering approach to merging the AI with the vehicles for high-quality, reliable and safe operations. Today’s Argo test fleet includes the Ford Escape Hybrid and Volkswagen’s all-electric ID.Buzz.