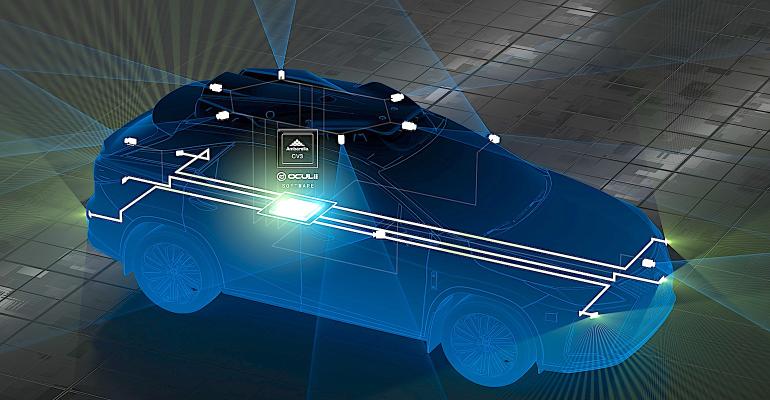 Ambarella's 4D imaging radar system promises to consolidate processing onto a central chip.
Most radars use multiple edge processors, but Ambarella says it has one chip to rule them all.

The central processor can handle raw radar data and deep, low-level fusion with other sensor inputs including cameras, lidar, and ultrasonics, according to the company. The goal is greater environmental perception and safer path planning in AI-based ADAS and SAE Level 2 to Level 5 driver assistance systems.

This is a valuable advance, as radar deployment is expected to increase. “There were [approximately] 100 million radar units manufactured in 2021 for automotive ADAS,” said Cédric Malaquin, Team Lead Analyst of RF activity at Yole Intelligence, part of Yole Group. “We expect this volume to grow 2.5-fold by 2027, given the more demanding regulations on safety and more advanced driving automation systems hitting the road. Indeed, from the current one to three radar sensors per car, OEMs will move to five radar sensors per car as a baseline,” he predicted.

One reason that radar usage will increase is that it appears that Elon Musk has changed his mind about the utility of radar for ADAS systems and will be returning the sensors to Tesla’s cars in 2023 after discontinuing radar sensor use in 2021.

Tesla submitted a request for certification of an apparent radar system on June 7, and in a Nov. 18 letter Tesla certification engineer Cindy Li requested the agency extend confidentiality of the request another 60 days, saying the “device will not be marketed until mid-January 2023.”

Tesla boss Elon Musk has recently backpedaled on his online criticism of radar systems with a Feb. 5 tweet conceding the value of “high-resolution radar.” So, with the industry’s biggest skeptic rejoining the radar bandwagon, the sensor has renewed momentum.

“Besides, there is an exciting debate on the radar processing partitioning and many developments associated,” noted Malaquin. “One approach is centralized radar computing that will enable OEMs to offer significantly higher performance imaging radar systems and new ADAS/AD features while simultaneously optimizing the cost of radar sensing.”

Normally, the data sets of 4D imaging radar technologies are too large to transport and process centrally, stated Ambarella. That’s because the sensors generate multiple terabits per second of data per module while simultaneously consuming more than 20 watts of power per radar module. When this is multiplied across the six or more radar modules normally employed to provide vehicles with 360-degree coverage, the total can be overwhelming for a central processor to handle.

Doing this reduces the antenna array for each processor-less MMIC radar head while achieving an extremely high 0.5 degrees of joint azimuth and elevation angular resolution. Ambarella’s centralized architecture consumes significantly less power, at the maximum duty cycle, and reduces the bandwidth for data transport by 84 percent.

“No other semiconductor and software company has advanced in-house capabilities for both radar and camera technologies, as well as AI processing,” said Fermi Wang, president, and CEO of Ambarella. “This expertise allowed us to create an unprecedented centralized architecture that combines our unique Oculii radar algorithms with the CV3’s industry-leading domain control performance per watt to efficiently enable new levels of AI perception, sensor fusion, and path planning that will help realize the full potential of ADAS, autonomous driving, and robotics.”

This sounds attractive, but neither Ambarella nor its customers are prepared to announce their plans for this to be used in production vehicles. “Our early-adopter customers are still in the beginning stages of evaluation for our new centrally processed radar architecture,” said Ambarella’s press relations person. “Unfortunately, our agreements prevent us from disclosing their names, or anything about their development or production plans.” Maybe Tesla will be one of them!