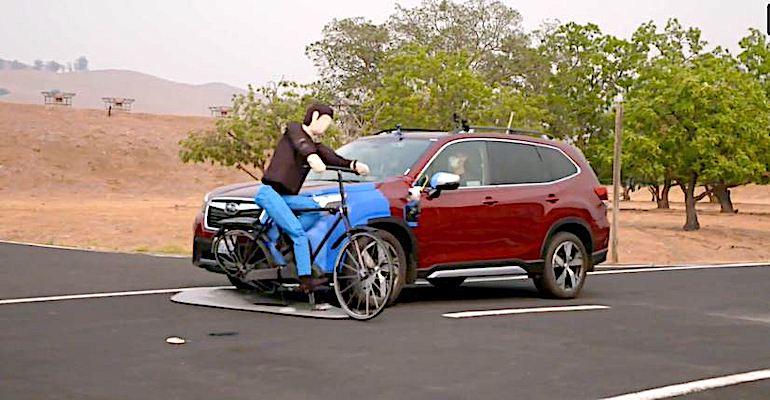 A test car strikes a bicyclist test dummy in a test of automatic collision avoidance.
Carmakers will need to develop more foolproof systems to garner public support for automated vehicles.

The American Automobile Association’s latest testing of driver assistance systems shows inconsistent performance from the technology designed to help prevent crashes, and a survey of consumers shows that people are acutely aware of these technical shortcomings in such systems.

The latest round of test failures, which included a car striking a bicyclist dummy, is the third batch of AAA tests in which driver assistance technology has failed to deliver on its promise of improved safety. Consumers who drive these cars every day see the shortcomings, leading them to have little faith in the ability of these same carmakers to deliver fully autonomous vehicles that will not present the risk of causing crashes.

“You can’t sell consumers on the future if they don’t trust the present,” said Greg Brannon, director of AAA’s automotive engineering. “And drivers tell us they expect their current driving assistance technology to perform safely all the time. But unfortunately, our testing demonstrates spotty performance is the norm rather than the exception.”

This is why the consumers surveyed by AAA indicated that they’d be more interested in technology that augments their own driving (77 percent) rather than having cars drive themselves (18 percent). However, current systems to do exactly that are underperforming in the association’s tests.

In the latest such test, vehicles with an SAE Level 2 active driving assistance system failed to consistently avoid crashes with another car or bicycle during 15 test runs.  Of course, AAA doesn’t ram into real cars or people on bicycles, using a foam car like the AB Dynamics Soft Car 360 to represent other cars and a dummy on a bicycle in place of an actual cyclist.

The safety systems delivered dismal results, crashing head-on into the simulated oncoming vehicle in its lane every time. In only one of the 15 test runs did the test vehicle even slow significantly prior to impact. The systems performed correctly when tested to avoid crashing into the back of a slower-moving car ahead going in the same direction.

Watch this #FSD @Tesla drive straight through a bike lane before slamming on the brakes in the middle of the road for no reason! @ElonMusk even your latest version of FSD still makes these basic errors!#ODowdForSenate pic.twitter.com/iArAJeqWBc

Results were similar for bicyclists, with the systems allowing cars to crash into a bike crossing the lane in 5 tests out of 15, while successfully avoiding contact with cyclists riding in the same direction in every test.

The cars used for the testing were the 2021 Subaru Forester with “EyeSight,” 2021 Hyundai Santa Fe with “Highway Driving Assist,” and 2020 Tesla Model 3 with “Autopilot.” The tests occurred at AAA Northern California, Nevada, and Utah’s GoMentum Station proving ground in Concord, California.

Based on these failures, AAA is calling for such assistance systems to be matched with driver-monitoring systems that ensure the driver is paying attention to the road ahead and is not relying on the car’s systems to avoid crashes.

“While it may be encouraging that these driving systems successfully spotted slow-moving cars and bicyclists in the same lane, the failure to spot a crossing bike rider or an oncoming vehicle is alarming,” said Brannon. “A head-on crash is the deadliest kind, and these systems should be optimized for the situations where they can help the most.”

While failing to identify hazards is an obvious problem that is easy to identify in testing like that done by AAA, another issue is the systems responding to phantoms. Apple co-founder Steve Wozniak discussed his experience with Tesla Autopilot during an appearance on the Steve-O’s Wild Ride! Podcast on March 3.

“We’re on the Interstate going 75 miles an hour, and all of a sudden the car screeches the brakes,” he said. “It goes all the way down to 25 miles an hour with nothing around, no cars around. This is so dangerous! It has happened to us a hundred times.”

Critics of such systems are often dismissed as Luddites or as being technically incompetent, but such dismissals will have difficulty with tech icons like Wozniak. What is needed is for the technology to improve and for automakers to dial back their claims for such systems until they have improved.