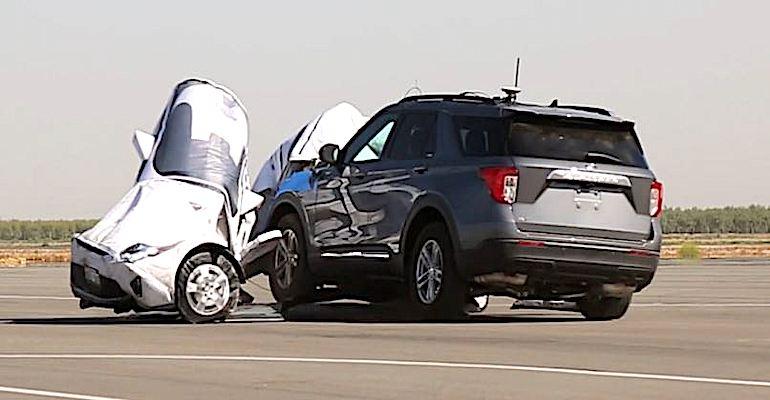 Automatic emergency braking failed to prevent this collision at an intersection in AAA testing.
Automakers’ marketers are writing checks that their ADAS systems can’t cash.

The American Automobile Association (AAA) isn’t thrilled with the current state of Advanced Driver Assistance Systems (ADAS), with particular criticism of the names of these systems. AAA says names like Autopilot, ProPILOT, or Pilot Assist mislead drivers into expecting that these systems will drive the car for them when that is not the case.

The association reminds drivers that there is still no such thing as a commercially available self-driving car, and warns drivers to be observant when using systems that steer and brake automatically. “For the safety of everyone on the road, drivers must remain engaged and active participants when behind the wheel,” reads the AAA statement.

Based on its testing, AAA has good cause to be skeptical of these systems’ performance. During 15 test runs for an oncoming vehicle within the travel lane, there was a head-on collision every time, with only one test vehicle significantly reducing speed before the crash. When tested by having a cyclist cross the travel lane of the test vehicle, a collision occurred for 5 out of 15 AAA’s test runs.

“We have evaluated Level 2 systems for three years now and generally the systems tend to perform reasonably well in light traffic with no sharp curves in the road” reported AAA senior automotive engineer Matthew Lum. “But the instant something unexpected comes up, such as cyclists crossing the lane or having an approaching vehicle intrude in the lane, things that are very possible in the natural environment, they can’t deal with these things currently.”

While there are differences in the performance between the different systems, none of them are fully up to the task, he said. “Every single Level 2 system available now is going to have some challenges.” That means that the cars must ensure that the driver is always paying attention. “Direct driver monitoring systems; we unequivocally feel that is the best approach,” Lum said.

Stanford computer science Ph.D. Andrey Kurenkov has been testing Tesla’s Full Self-Driving beta software and he is similarly unimpressed by a system with a name that seems certain to mislead drivers. In a Twitter thread on his test results, he explains that the car “tried to turn left on a right turn, almost merged into an oncoming car, and drove into an intersection that a biker was crossing at the other end.”

These issues mirror those experienced by AAA’s testing. Kurenkov was also dissatisfied with Full Self-Driving’s handling of stop-and-go traffic, complaining that accelerates and brakes uncomfortably hard in addition to periodically braking for no obvious reason. Unsurprisingly, he also found that Full Self-Driving “is bad at 'delicate' situations with implicit human communication.”

His verdict: “Good for highways/freeways and emptyish streets, not reliable enough in general. Perception: surprisingly bad.”

Good for highways/freeways and empyish streets, not reliable enough in general.

It seems to rely on frame-by-frame object/lane detection with no tracking measures. It also does not seem to have 'common sense' about roads in general ...

With automakers still struggling with Level 2 ADAS systems and the first Level 3 systems like Mercedes-Benz’s Drive Pilot system just reaching the market, there has been a major retreat from ambitious projects to develop full autonomy. “In terms of technical evolution, we are in that trough of disillusionment for full autonomy,” Lum observed. Whether fully self-driving cars are even possible, or how soon it will happen is now anyone’s guess. “It could happen 10, 20, 30 years from now, who knows?” he said.

The upside of that is that carmakers are refocused on improving their lower-level driver assistance systems, which have shown real-world reductions in crashes in fatalities already. “From a consumer perspective that could be a positive,” said Lum. Better ADAS and automatic braking systems that perform better in a wider range of circumstances is a better goal. “They are a good example of where R&D resources should be allocated,” he said.