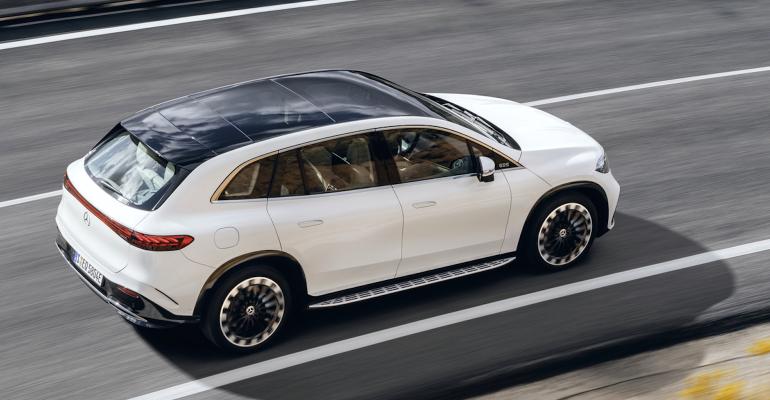 The 2023 Mercedes-Benz EQS SUV combines the practical SUV body style drivers want with the efficient electric drivetrain they will need.

The S-Class sedan is the eternal flagship of the Mercedes-Benz product line, the top-of-the-range model that debuts new features like anti-lock brakes (1978) before they reach the rest of the industry.

But consumers’ tastes have shifted away from sedans to SUV body styles, and the industry is shifting from combustion propulsion to electric power. Thus, Mercedes has developed an electric SUV that is the company’s S-Class of the future.

They call it the EQS SUV. There is already an EQS in the company’s lineup, a sedan that is positioned to take the flagship mantle from the S-Class when the company goes all-electric. The SUV rolls atop the very same electric-drive platform as the EQS sedan, even using the same 126.4-inch wheelbase.

This puts the EQS SUV on a longer wheelbase than the existing combustion-powered GLS. However, the both the EQS sedan and SUV are smaller overall than the combustion models they’ll eventually supplant.

Related: What it is Like to Trust Mercedes Drive Pilot’s Level 3 Driver Assistance

Of course, it is easier to push a smaller vehicle through the air, and aerodynamic drag is a key factor in EV driving range. By reducing the frontal area by trimming the EQS’s height and width (by 2.4 and 2.8 inches, respectively), the batteries don’t need as much juice to push the EQS through the air.

This attention to aerodynamic detail extends to the tires too, according to Ola Källenius, chairman of the board for Mercedes. “Tires and wheels account for a significant portion of drag,” he said at the vehicle’s introduction. “So, our engineers reduced drag through details such as aero cladding, spoilers, optimized tread patterns, and a closed, wind-proof spoke design. Even the innovative new running boards help reduce drag.”

The EQS is also shorter than the GLS, despite its longer wheelbase, contributing to a noticeable overall reduction in cabin space. This is illustrated by the EQS’ 22.7 cubic feet of cargo volume behind its second-row seats. This compares to 42.7 feet for the GLS behind the second row. Indeed, the GLS has nearly as much space behind its third row (17.4 cu. ft.) as the EQS has behind its second row. 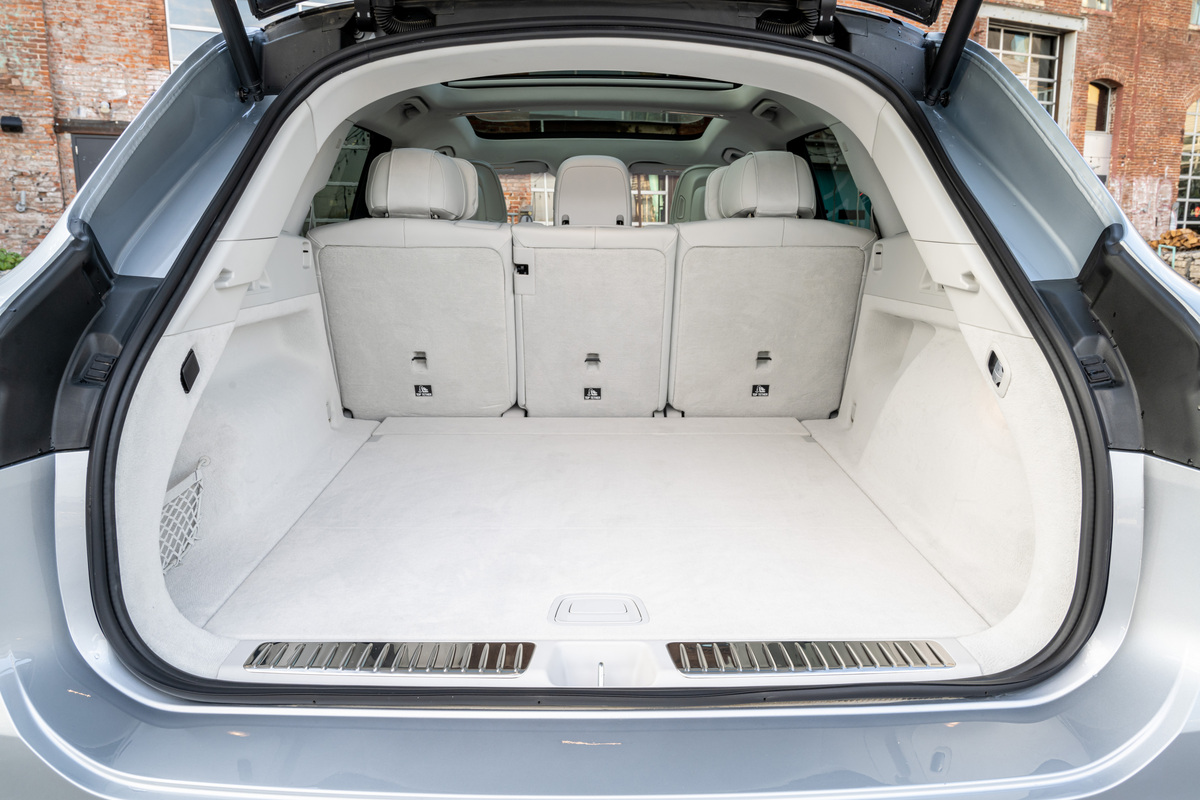 The cargo bay of the Mercedes-Benz EQS SUV.

This downsizing is understandable, as carmakers see to wring the most mileage possible from their electric vehicles. In the case of the EQS, the car’s NMC 811 chemistry lithium-ion batteries carry 108.4 kWh and they propel the vehicle 305 miles, in the case of the rear-wheel-drive EQS 450+ SUV, and 285 miles for the all-wheel drive models. These benefit from a 5-to-10 percent increase in driving range by using a disconnect system for the front drive axle when it is not needed during steady-state highway driving.

The EQS SUV’s 900-volt battery pack enjoys 200-kilowatt DC fast charging, which the company says can bring the state of charge from 10 percent to 80 percent in just 31 minutes. However, recharging a nearly dead battery to a full charge on a typical 32-amp home AC Level 2 charger will take 12.5 hours. I’m interested to see how long it takes on my 40-amp Chargepoint charger when I’m able to test one at home.

The permanent magnet electric motors are from Valeo and contribute 355 horsepower and 419 lb. ft. of torque to the rear axle in the base model EQS 450+. The all-wheel drive 450 4Matic has the same peak horsepower, but more torque, at 590 lb.-ft. thanks to its second motor driving the front wheels. 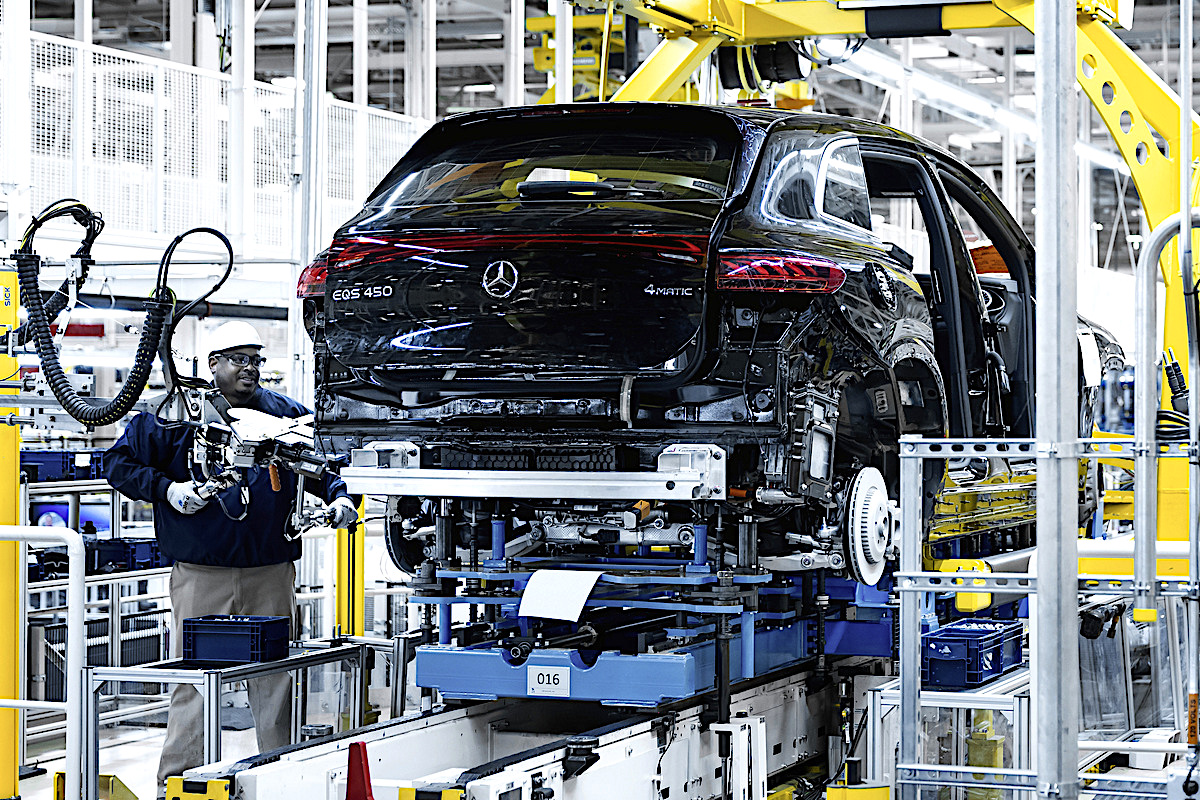 The Mercedes-Benz EQS SUV is made at the company's plant in Alabama.

The extra motor increases available torque because, well, there are two motors. But their combined peak power is unchanged from the single-motor version because that’s how much energy is available from the battery pack through the inverter. The EQS 580 4Matic, the higher-level model in the line, actually has reduced peak power from the same motors, at 536 hp, because the system is tuned for increased torque, which is rated at 633 lb.-ft.

All of these vehicles feel quick in around-town driving, and they feel very quick when tasked with chores like climbing the steep mountain roads outside Denver, where the cars launch aggressively out of slow corners with no reduction in power due to the thin air at altitude as combustion engines would exhibit. 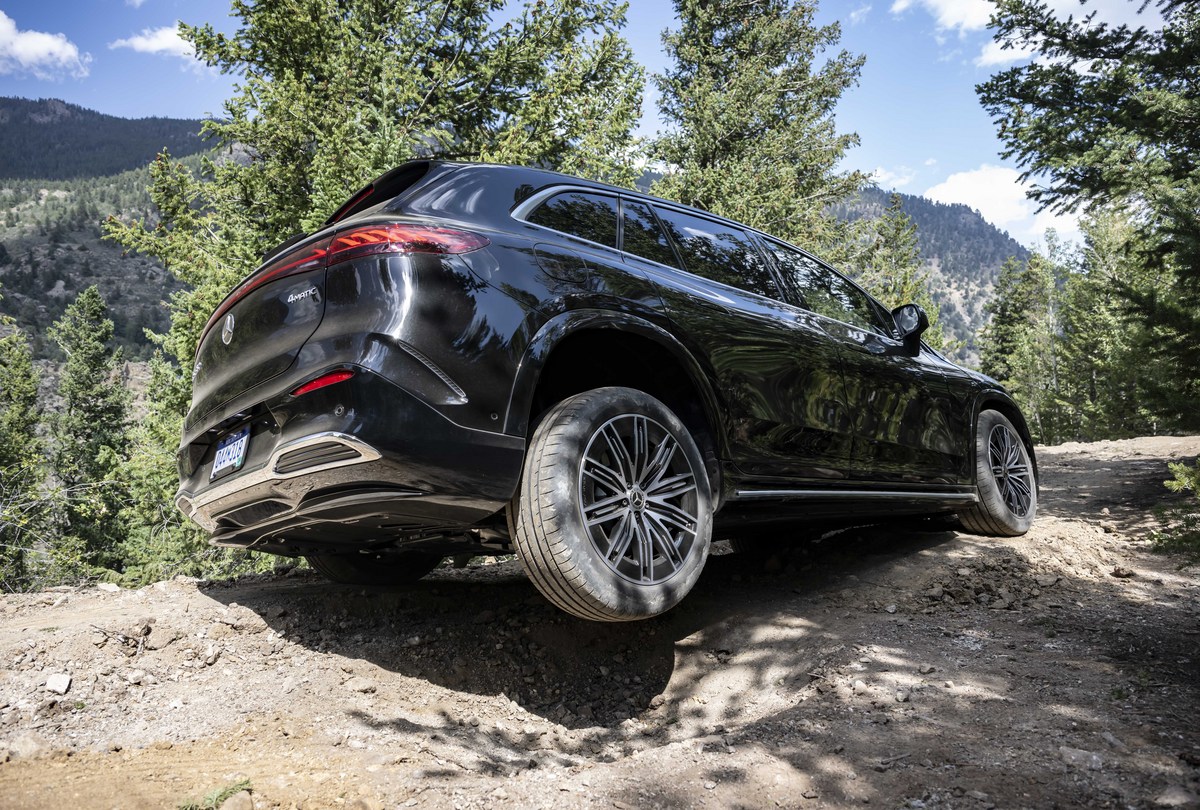 Off-roading might not be your first thought for the EQS SUV, but its advanced all-wheel-drive and adaptive suspension systems definitely let the luxury SUV crawl over obstacles.

The other thing you’ll notice while hustling the EQS SUV through mountain switchbacks is how easily it manages to make the tight turns. This is thanks to its rear-wheel steering, which applies as much as 10 degrees of steering angle to the rear wheels in these situations, making the long-wheelbase EQS drive like a vehicle with a shorter wheelbase. The benefit is also obvious while parking.

Rear steering is also beneficial while off-roading, as vehicles often need to snake around trailside obstacles like rocks or trees. This would seem to be irrelevant for a smooth operator like the EQS SUV, which seems more at home in suburbia than the outback, but Mercedes demonstrated the vehicle’s capability on an off-road course too.

Modern electric all-wheel-drive control systems and adaptive suspension technology leave no reason to doubt the EQS SUV’s off-road capability, but the truth is that these buyers choose all-wheel-drive for the all-weather on-road security for trips to the ski resort. 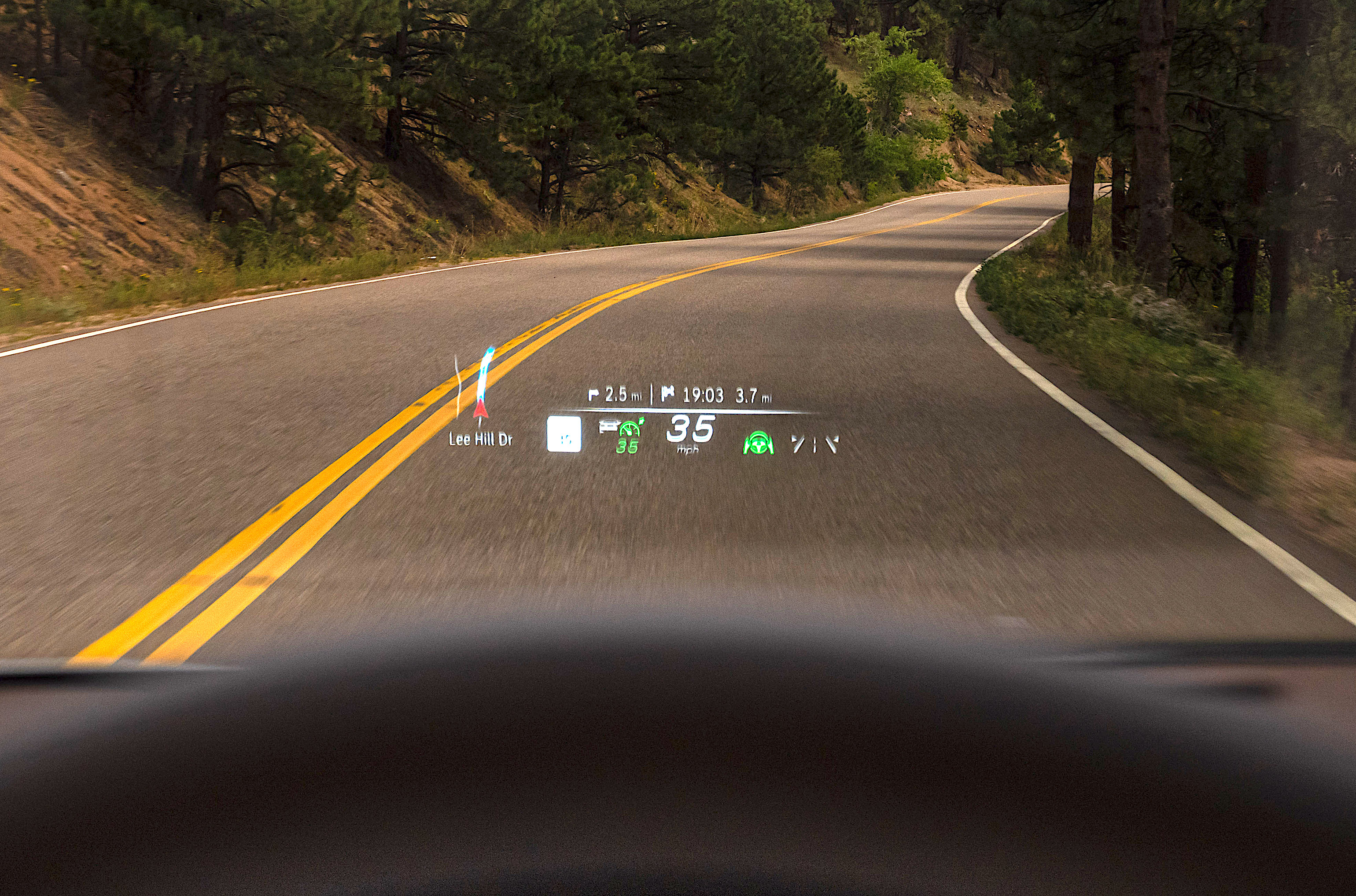 Augmented reality that is available through the EQS SUV's head-up display is a valuable benefit when navigating unfamiliar roads.

Navigating to and from that resort is simplified in the EQS SUV by its available head-up display with augmented reality. This system projects directions and uses arrows to indicate lane alignment for exits and intersection right onto the windshield, in the driver’s line of sight. This is the best way to convey information while a driver is busily trying to figure out the details of an off-ramp or roundabout. It seems likely to be another example of a technology that trickles down to “regular” cars over time. For now, you’ll have to spend six figures for the EQS to get it.